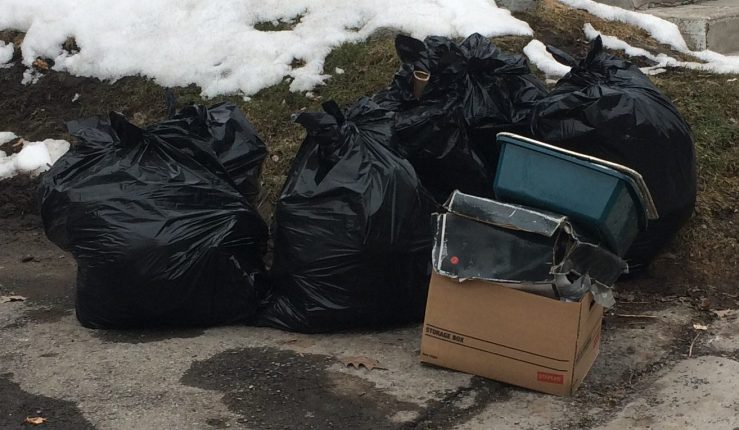 A few weeks back I mentioned a profitable new route I went on. It hasn’t been nearly as good since, but on that first day I happened upon three quality piles within the first four streets. This one, which sat in front of a stately yet decrepit house was the last of the bunch.

Inside one of the bags was a large collection of silverware. I took a completionist approach to cataloguing this stuff – I took pictures of everything! That might have been a little over the top, so bear with me here. I’d say that between 1/4 and 1/3 was junk, or too worn out to be sold.

However, a good percentage of this haul was quality, and several pieces were very nice. Most of the silverware in the next few photos are yard sale quality or junk, though a few 800 (80%) silver pieces are mixed in as well. That three pronged fork at the bottom left is silver, for example.

Most of the pieces on the right and left are too worn out to be sold – I left them on the curb for someone else to pick through. The dinner knives are nice, if not particularly valuable.

Nothing too special here, though if I remember right the knife third from the top on the right had a 80% silver handle. A few of the four pronged forks might be of the silver variety, though I can’t remember which ones exactly.

Here we have two more of those three pronged silver forks, and maybe one four pronged one.

Finally we get to the best of the bunch! The spoon and ladle on the left are marked 800 silver – I believe they were made in Germany. The little spoons and larger spoon bear similar markings. The big serving knife & fork on the right were made by Christofle, a pretty well-known and respected company. They’re probably only silver plated, but they should sell for a decent price regardless. Those curvy pieces on the middle left (salad servers perhaps) are signed Sanborn sterling. They have a mid-century look to them, and I think they’d sell for around 150$ cleaned up.

These were the most unusual pieces of the bunch. They seemed to go together, though it’s possible they’re totally unrelated. The fork is certainly more plainly designed, and features some character stamps on the back that I expect are Chinese. Zoom in for a better look! The knife is much more ornate, with detailed dragon motifs on both the handle and blade. It also has a stamp on the back, but I can’t really make out what it says (maybe IJC?). I expect both are made from a high grade of silver. If anyone knows where they might have come from, please let me know!

Overall, the silver in this collection (both 80%, 92.5%, and suspected but unknown) weighs around 1.6kg, good for somewhere around 700-800$ in scrap value. However, several of the pieces are worth selling on their own merit (like the big ladle) and should go for a fair bit more than that. In short, this silverware haul should end up being a very good find! I’ve been having very good luck finding silver in the last six months; here’s hoping the trend continues.

Here’s the second pile. Unfortunately, before I could finish looking through the bags a grumpy older lady walked down the street and started bothering me. She told me to put all my finds back in the bags, a laughable instruction that I never take seriously (unless it looks like someone might actually fight me over it). 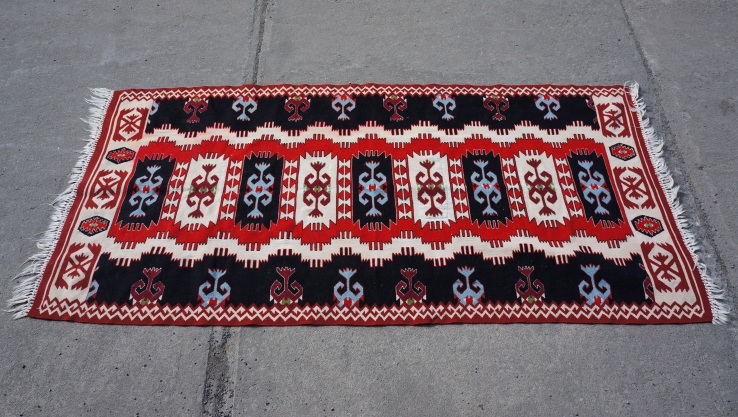 When people interrupt me mid-pick I’ll often use harmless looking props as examples of what I’m looking for. In this situation I asked this lady why she’d want me to doom this perfectly nice carpet by putting it back in the bags. She was unswayed, but I saved it regardless. I later noticed that it smelled a bit like cat pee, but not very strongly so maybe one of those sprays can remove the stench (I’ve had success using those in the past). As for the carpet itself, does anyone know who might have made it? The colors are great, and it might be hand-woven.

That Waterman fountain pen was another prop. It was basically brand new, and there was no good reason for it to be trash. Again, she didn’t care but I kept it anyways. The pen is part of the Phileas series, and in this condition it should sell for around 100-120$. Not bad!

That Bose CD player would have been nice but the battery terminal was ruined by corrosion. That can be fixed, but it wasn’t in particularly good condition otherwise. To the e-waste bin it went. The expired film and disposable camera made me about 8$ at the vintage market. That leather thing was filled with pennies, probably a makeshift weapon of some kind (like the classic “sock full of pennies”). That ring box was cute; it contained a curl of hair, but I used it for shipping out a ring I sold recently. The cameras weren’t anything special but they should sell at a yard sale.

These folks seemed to have a sense of humor, perhaps best exemplified by the novelty eraser and “Luv Ewe Party Sheep” in this photo. 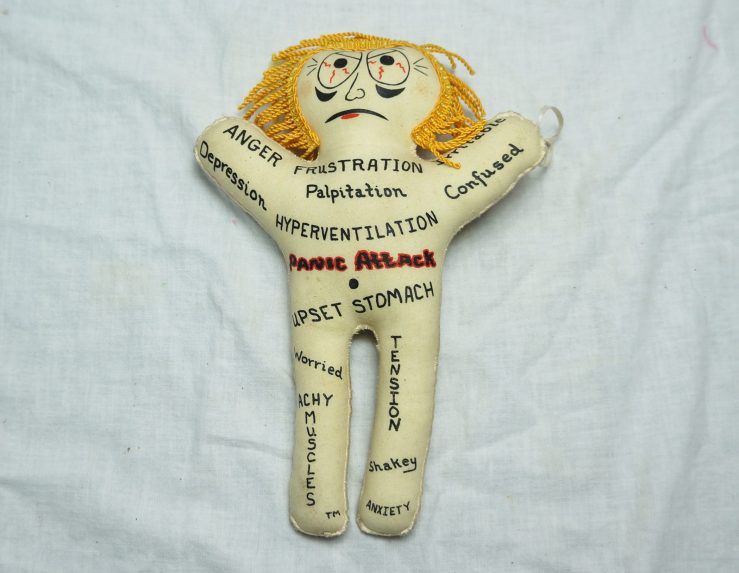 Also this voodoo doll, which sold at my most recent vintage market. Perhaps that lady would have left me alone if she had upset stomach! Unfortunately, I had no pins on me.

I wasn’t able to search two of the five bags – hopefully I didn’t miss much. I’d be peeved if those bags ended up containing the Montblanc pens and gold bars. You never know.

I haven’t seen anything from these spots since that first fateful run. The first stop, however produced more in subsequent weeks. I’ll show you some of those finds in an upcoming post!