Spring is finally here! The weekend was very beautiful (more on that later) and I had hopes that this week would be a good one for finds. However, I feel like all I’ve seen thus far is bags and bags of yard waste – twiggy crap that only worms would want. It seems that for most people the first step of spring cleaning is to rake the yard. My thinking now is that people get to cleaning out their basements and closets a little later on. That would explain why May was such a good month for me last year.

Still, I’ve made a couple of noteworthy finds in the past few days. I was driving around NDG when I noticed this guy poking his head out from behind a recycling bin.

It ended being an legless full-sized cutout of some dude. His fashion sense is very 1950s or 1960s, and I’d guess it was made around that time. It makes a cool decoration so I might just keep it myself. I’d love to know who it is though – let us know in the comments if you have any ideas!

My run last night was pretty quiet overall. However, I did stumble across this nice vintage chair.

It’s got a very modernist look to it. On the bottom is a label marked Widdicomb, the name of a renown American furniture company. After consulting with Reddit, I can say more specifically that it looks to be a piece from George Nakashima’s “Origin” line.

Some Widdicomb pieces go for a fair bit of money. However, it’s super comfortable and I’m considering keeping it for myself. My decision on whether to keep it or sell it will depend on just how much it’s worth, as I have a hard time turning down good money for decorative stuff. There is a light stain on the cushion, and the cushion is probably a bit “saggier” than it was 60 years ago but it’s in fine condition otherwise. Paranoid, I inspected it for bugs multiple times but found no trace of them. I suspect the previous owners just wanted something new and “fresh.” Stain-free perhaps.

My yard sale on Sunday went quite well! The weather was fantastic – sunny all day and about 20 degree Celsius – so I couldn’t have picked a better day. Thanks to all the readers who came by and said hello! I made just over 300$ overall, which I consider a pretty solid performance.

The sale was also productive because it helped me get my stuff organized. I have a loose organization system (ie: specific boxes for ephemera, doodads, and whatever) and having everything out there made it easy for me to put things in the right places. This also made it easier to purge. I got rid of maybe four boxes worth of stuff I decided wasn’t worth trying to sell, which of course opens up more room for better things.

If anyone’s curious, when I do a purge I’ll put all the stuff on the curb in open boxes, which allows other scavengers pick through it and take whatever might have any value. I make sure to put the boxes out only when the weather is nice, and well in advance of trash collection. There’s plenty of pickers in Montreal, and I think this is the most effective way to redistribute my refuse.

Otherwise, I got a tetanus booster the other day. It had been about 10 years since my last shot and I figured that it’s a good thing to stay on top of given my profession. I’d recommend that anyone else who digs through trash regularly (as well as those who don’t) do the same! 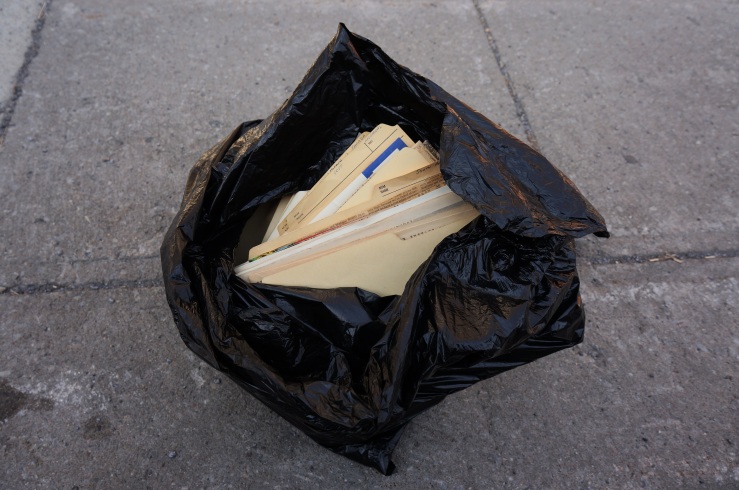 This post mostly serves to announce my first yard sale of the year! The weather on Sunday is supposed to be phenomenal – 19 degrees, not too windy and sunny all day – so I figure I might as well take advantage.

I have a whole winter’s worth of random stuff to unload, meaning this sale is going to be larger than most. It might be a bit disorganized, but I’ll definitely have lots of boxes for you to rummage through. Also, I should note again that at my yard sales the items are priced to sell. I love stuff, but I get no pleasure from lugging the same things back and forth over and over again. What I enjoy most is seeing my stuff find a new home, and knowing I won’t have to bring it inside ever again.

You’ll find me at 5051 Brebeuf near Laurier Park in the Plateau. I expect I’ll be out from around 12-6pm. I also have two bikes with flat tires, and am willing to trade garbage to anyone who can repair them on the spot.

It’s been a bit of a slow week for finds. I expect next week will be better because of the great weekend weather. Regardless, I have a few things to show you. One is this collection of meticulously organized newspaper clippings.

There’s about two trash bags worth. Most look to be from the late 60s and early 70s, and cover various local, national, and world issues. I imagine the person who collected them was pretty well educated. For instance, “Americanization” is actually divided into two categories: culture and ownership. Most people wouldn’t have bothered with one Americanization category, let alone two!

I think there’s actually the potential for a cool project here. If scanned and catalogued they might provide an interesting window into the issues of the times, as well as the perspective of the person who collected them. Unfortunately I have no time to do anything like that, but if something like that interests you let me know! I wouldn’t ask anything for the clippings, provided they go to a good home.

I pulled a few items of particular interest from the folders. One is this 1969 issue of The Georgian, a student newspaper of the Sir George Williams (now Concordia) University. It was published around the time of the Computer Riots, when 200 students occupied the university’s computer center to protest the administration’s dismissive attitude towards the racism of one of their teachers. A local archivist who focuses on Montreal’s underground culture called this particular issue a “classic,” and will likely want it because it’s in very good condition for its age. Click the link above to read more about the riots, and to see some quality scans of this magazine.

On that note, if anyone in Montreal has any old underground stuff they’re looking to get rid of, including show posters, magazines, newspapers, videos, cassettes (including radio recordings that aren’t of classical music), and etc, let me know. I can put you in contact with someone who may be interested in acquiring them.

I also found this 1970 “Mass Line” magazine in one of the folders. Mass line refers to a strategy of public consultation employed by Mao Zedong around the time of the Chinese Revolution. The magazine promotes the ideas of Lenin and Mao while attacking both “U.S. Imperialism” and “Soviet Revisionism.” It’s certainly an interesting item, one I wasn’t able to find any reference to on Google. 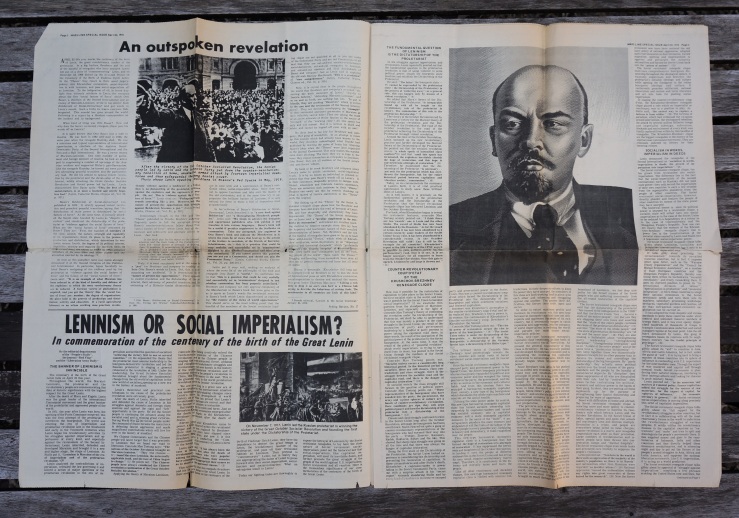 Otherwise, here are a few things that you might see at the yard sale! I found a couple vintage game boards in TMR; …

… some vintage tools in Westmount; 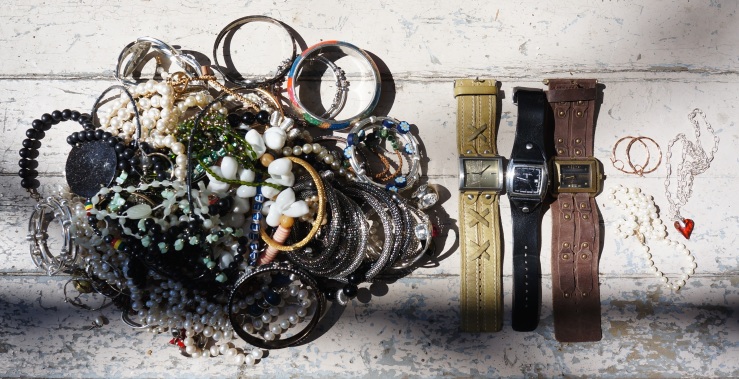 … and a mound of jewelry just a block away from my house. Most of it isn’t particularly special, but I did save a silver necklace, a possibly pearl necklace with a 14k gold clasp, and a pair of 14k gold earrings that are worth about 40$ in scrap.

My sales totals continue to be strong, though this time around my success had little to do with eBay. A semi-regular selloff of precious metal scrap contributed over half my earnings, while sales to readers and other local buyers brought in much of the rest. eBay sales seem to decline once the warm weather comes, but the arrival of yard sale season (perhaps as soon as this weekend?) should offset much of that loss. 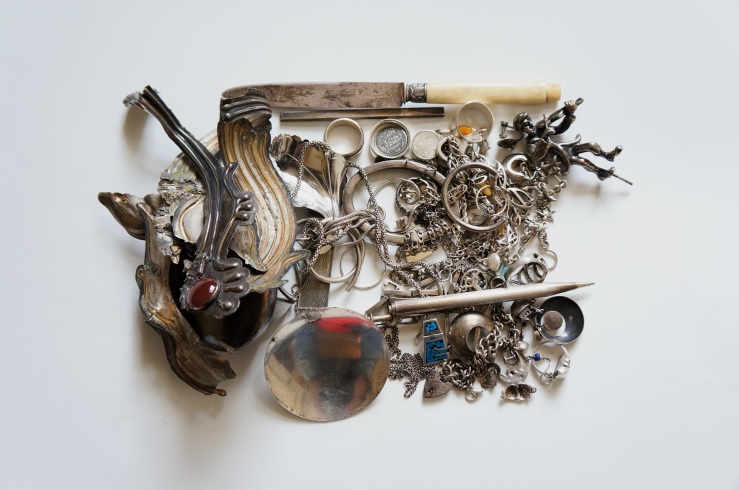 1. Gold and silver scrap: To a local business for 730$. I love selling off scrap. It takes very little effort and the payday always makes me feel like I just won the lottery. The scrap is largely composed of jewellery that’s broken, incomplete (ie: a single earring), or of limited value beyond its weight. A few old Canadian coins, a busted silver pen, a silver lid, and the silver overlay I harvested from a busted vase in Cote St-Luc was also included. Above is a photo of the silver scrap, and below is a picture of the gold. I also had a “maybe” pile, most of which turned out to be junk.

2. iPod: To a friend for 100$. I didn’t actually find this brand new iPod in the trash. However, I did salvage an old 1st generation iPod Nano in TMR a while back, and because the model had been recalled years ago Apple replaced it free of charge. I gave my friend a good deal, and I made a bit more than I would have selling the old one.

3. Perfumes: To a reader for 47$. A bottle of Hermes I found a couple weeks ago in TMR made up 40$ of that total. It sure didn’t sit around long! 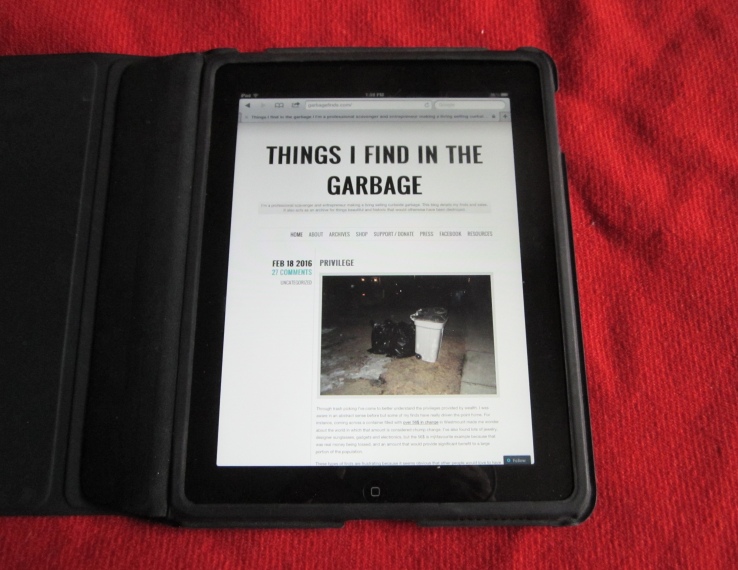 4. iPad: To a friend for 80$. Another good deal for a local buyer. Found a few months ago in TMR.

5. Ditmar Urbach art deco “alienware” vase: To a reader for 80$. I knew this vase was somehow special the first time I laid eyes on it. The production quality was very good and the style unique. My instinct was correct, but I do owe thanks to my readers for helping me to identify its origins! Keywords are much more valuable than gut feelings in the selling world. Found a few weeks ago in Hampstead.

7. WWII-era RCAF leather photo holder: On eBay for 32$. Found a couple summers ago in TMR. 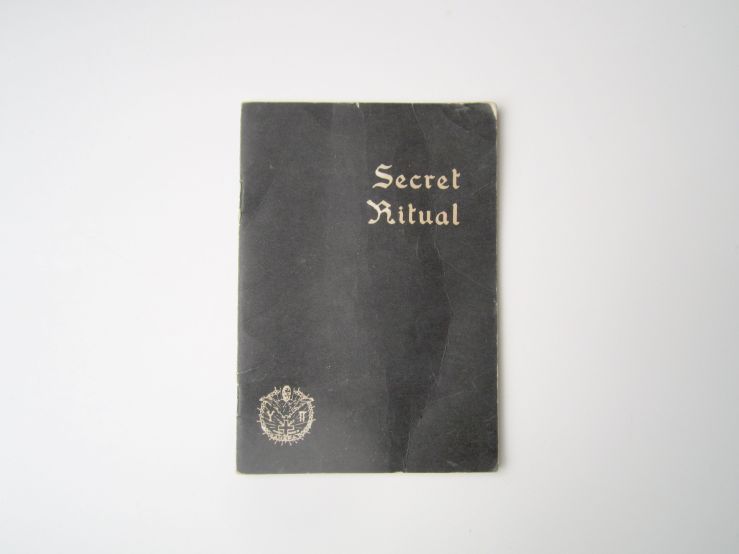 8. Sons of Pericles secret ritual book (1948): On eBay for 40$. I was actually a bit worried about listing this for a while, but over time I realized that none of this stuff is really all that secret anymore. Even if there is still a secret ritual in use, I figure they’ve probably switched things up a bit sometime in the last 68 years. Found a while back in Ville St-Laurent. If you’d like to see a few more pictures check out the eBay listing.