I had another great couple of weeks. I made my first four-figure sale (!) and sold a lot of items otherwise. Things won’t keep up at this pace, but it’s nice to have a bit of extra cash for a change. This March might have been my most profitable month ever, and at this point I’m wondering if the goal I set of 24k profit for the year was a bit conservative! We’ll see how it goes, as summer is generally a slow time for online sales but things are sure looking good so far.

Now, here’s the former trash that I’ve converted into cash…

1. Broken DJI Phantom II drone camera / gimbal (for parts or repair): On eBay for 200$. This was the first time I’ve found anything drone-related in the trash. The technology is pretty modern, so this gimbal sold for a nice amount even though it was broken. Found about a month ago in TMR.

2. Vintage plastic ring box: On eBay for 25$. I considered using this to package one of my Etsy sales, but instead decided to sell it. Found last March in Hampstead.

3. Anime DVDs: On eBay for 130$. This profit came from three different listings, but I’m grouping them all together because DVD sales aren’t particularly exciting. They were all part of the anime collection I found last October in the Plateau. 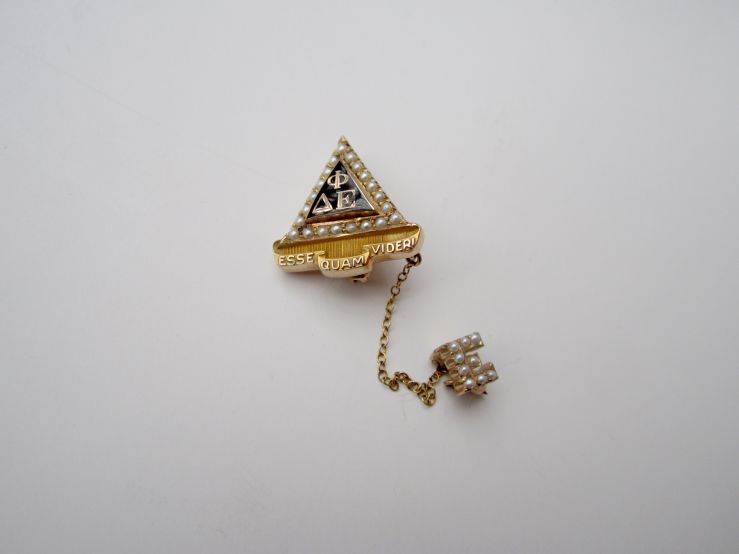 4. Delta Phi Epsilon sorority 10k gold pin: On eBay for 210$. Found alongside an Omega watch this January in TMR. That ended up being a pretty profitable pile of trash. 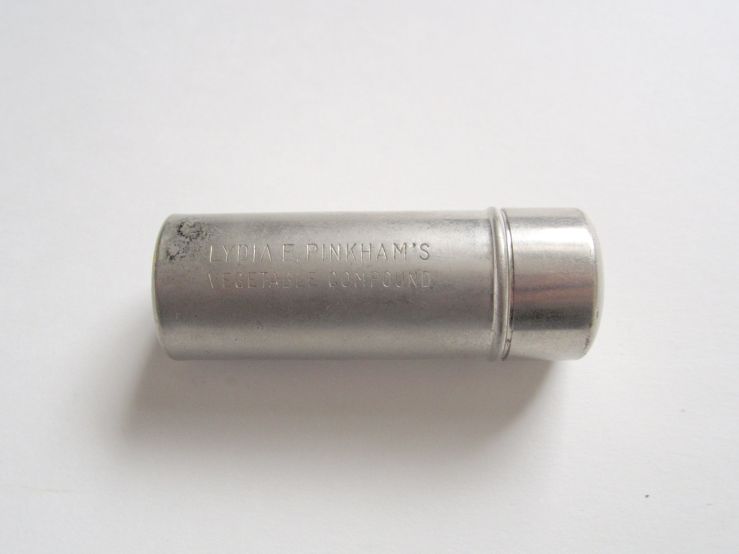 5. Lydia Pinkham’s Vegetable Compound miniature sewing kit: On eBay for 25$. I had this sitting around for quite some time before finally listing it recently. Found in Park Ex way back in 2013. 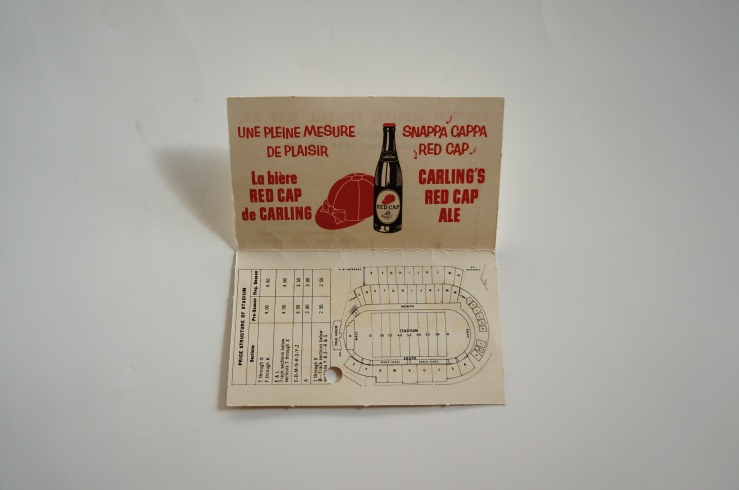 6. Montreal Alouettes 1961 season ticket card: On eBay for 15$. This sold pretty quickly, making me wonder if I should have upped the price a bit. I’m happy it sold regardless. Found last summer in Westmount. 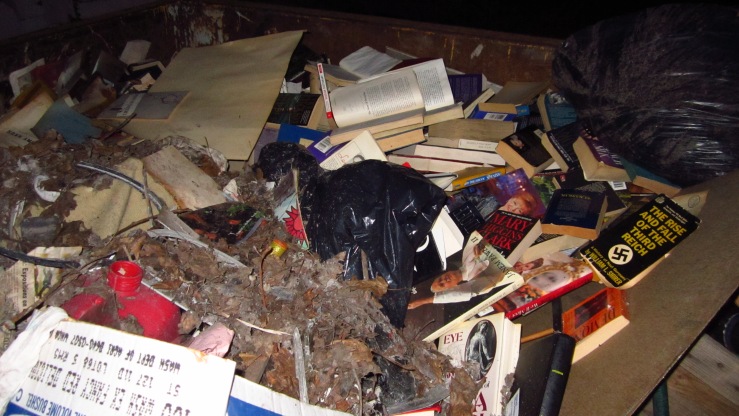 7. Collection of 19 pre-war Polish magazines: On eBay for 40$. They all came from a dumpster in Glenmount, which is a tiny neighbourhood within Cote-des-Neiges. I spent a while there digging through old, often ruined books, saving the ones that looked most irreplaceable. I assume that it’s relatively hard to find Polish stuff from before WWII given the devastation that occurred there. Regardless, I’m glad they’ve found a new home. To see the magazines (and others I’ve since given away or sold), check out the link above.

11. Boss DB-12 Dr. Beat Digital Metronome: On eBay for 16$. This ended up going to some remote part of Labrador, reducing my profit by at least a few dollars. I do flat rate shipping, so this kind of thing is bound to happen on occasion. As long as I still make money I don’t worry too much about it. Found in the Plateau last May.

12. Broken Mondaine watch: On eBay for 65$. This watch didn’t end up working but I still managed to profit from it. Found late November in the Plateau. 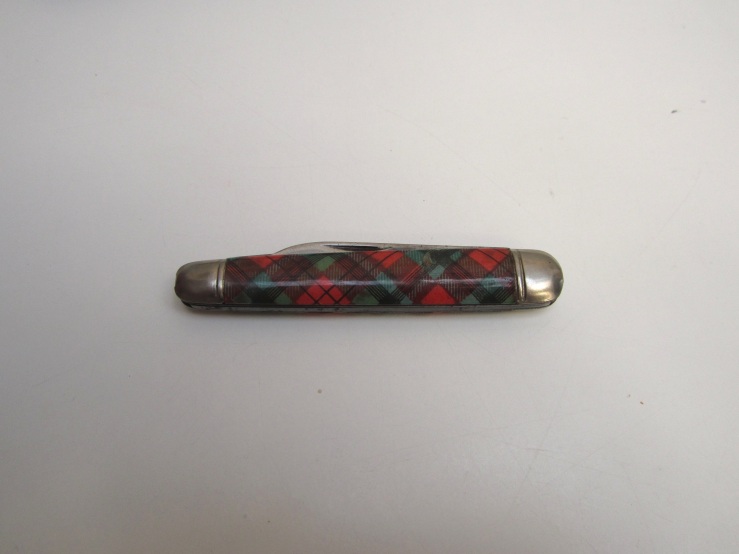 13. Vintage tartan pen knife: On eBay for 58$. Found last April in NDG. Kudos to my mom for letting me know these knives were collectible.

14. Lot of Expo 67 photos and documents: On eBay for 1250$. My first four-figure sale! After taking months to consider my options I recently began the process of listing the Expo 67 haul I found last October. Not long after I listed the Hostesses’ Handbook I received a message from a potential buyer and we got to discussing the photos I had yet to list. I think I negotiated myself a good deal here, with my patience and my willingness to test the market as I do likely earning me a better price.

I’m also generally happy with how the deal worked out. I earned a nice chunk of cash, and the buyer is someone who will use the items to further various intellectual and artistic projects. I’m confident this stuff won’t be collecting dust somewhere, or simply part of someone’s inaccessible private collection.

To clarify, the Hostesses’ Handbook was the most valuable part of the deal, netting me 250$. The photos went for an average of 15$ a piece, while the miscellaneous documents went for an extra 50$. The collection made me a lot of money largely because it was so extensive. Nearly everything included in the listing is shown in the link above. 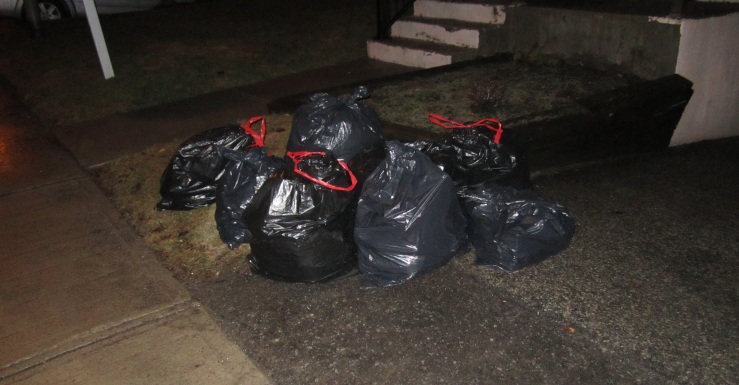 I decided to go on a run to Côte-Saint-Luc last week despite the fact that it was raining, occasionally heavily. I have a fondness for the neighbourhood, which is mainly composed of humble single-family homes and duplexes built between the 50s and 80s. It’s the location of a big rail yard, which makes a lot of noise even late at night. It’s largely Jewish – nearly 40% of the population as according to the 2006 census – but there are also pockets of Russians, Poles, and other nationalities. In the 2011 census 42% said English was their mother tongue, making it much less French (only 17.52%) than most other neighbourhoods here. About 36% reported a mother tongue that was of a non-official language.

I like to mention the neighbourhoods in which I make my finds. To me it’s big part of the story behind each item, as each area has its own specific character and attracts a certain kind of person. If you like to imagine the past lives of some of these objects, knowing what neighbourhood they came from can make that fantasy a little more vivid, or at least more accurate. I know most people outside of Montreal probably aren’t familiar with any of these places, so I’ll make a point going forward to describe any new neighbourhoods as best I can.

My trip ended up being more of a success than I expected. This spot in particular provided some nice finds.

I found a bunch of small items near the bottom of the first bag I opened, and spent several minutes sifting around making sure I didn’t miss anything good. I saved some Israeli coins, a cool retractable pen pendant that’s likely silver plated, a silver pendant with “Jerusalem Israel Sterling Silver” stamped on the back (with what looks to be some dried glue discoloring the front), a probably silver Israeli tag of some kind, and a nice little pin.

I suspected the pin was gold because it was heavy for its size. I didn’t see any markings at first, but later I noticed a faint “14k” on the side of the pin. It’s worth about 60$ for scrap, but it’s nice enough that I might try selling it on Etsy. If anyone recognizes the stone, let me know in the comments!

I also found two small trays or dishes, both of which are marked as being 800 (80%) silver. If they are indeed silver (I can’t personally test them, since I realize that my acid test kits are now expired) they’re worth a bit of money even if just sold as scrap. Together they weigh about 190 grams, making their silver value around 80$.

Otherwise, I saved a seemingly never used Waterman fountain pen, which someone on Reddit helped me identify as a first generation “Expert” … 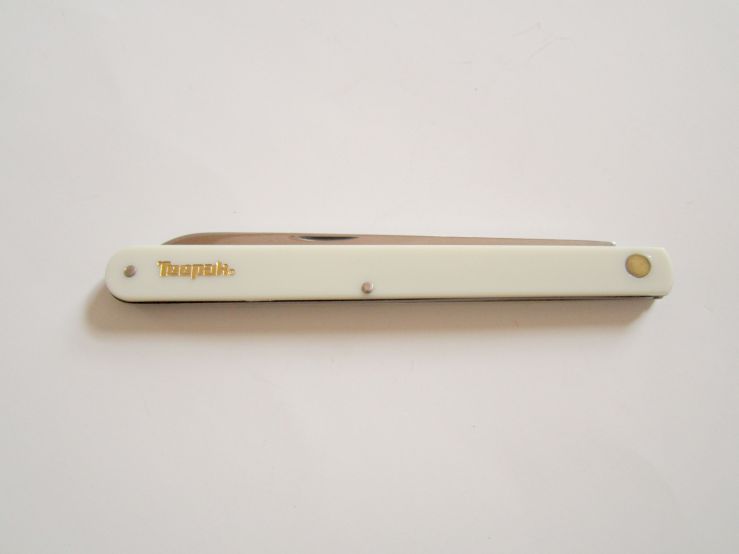 … and a large collection of vintage brochures, most of which looked to be from the 60s and 70s. 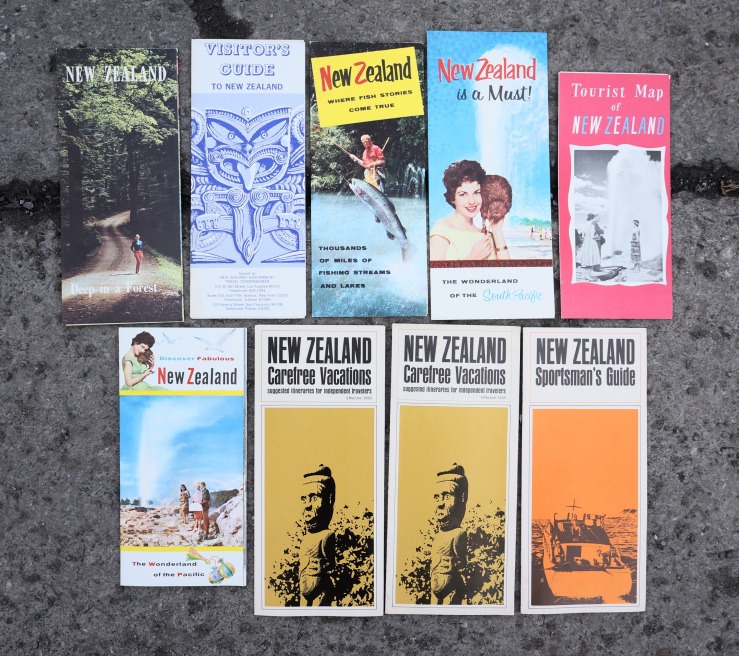 Here’s what came out of the New Zealand package. 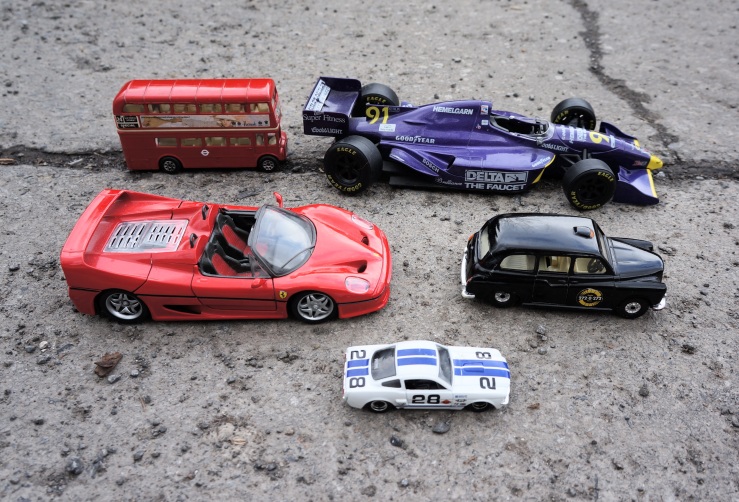 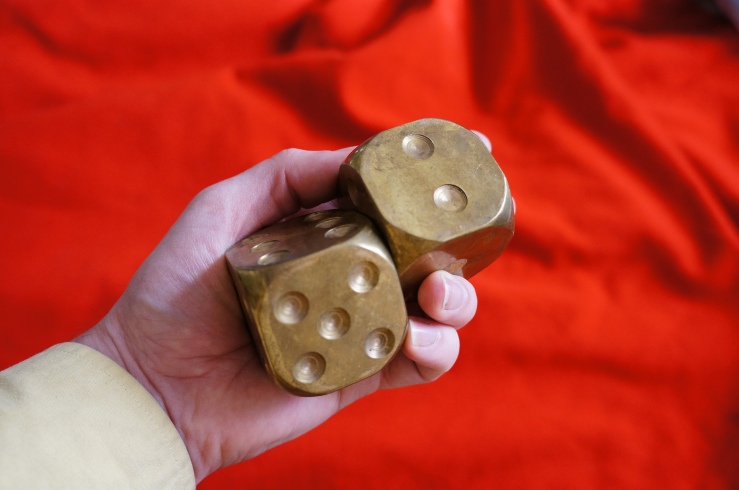 … and a busted Domar vase, similar in style to this one I found on eBay. It was adorned with a sterling silver overlay which I was able to tear off. The silver weighs about 70 grams, making the scrap worth about 30$. There was lots of silver out that night! 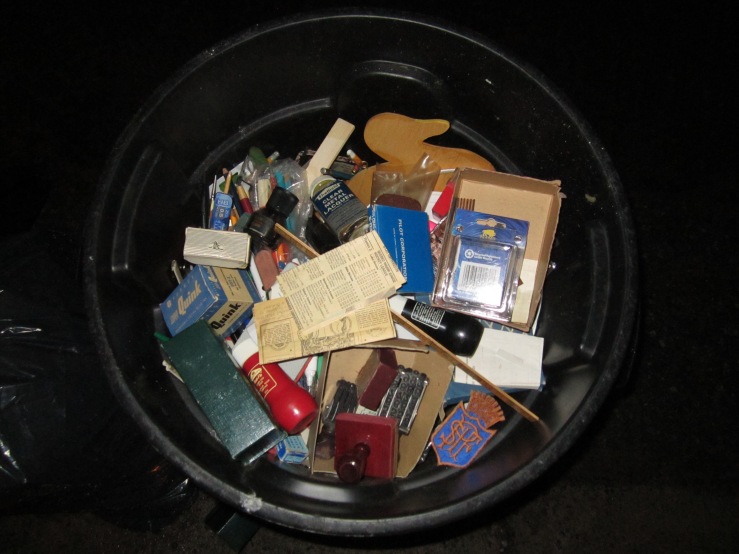 Towards the end of my run I opened a trash can which contained that person’s flotsam.

I saved a few cool things, including a vintage slide rule. There seems to be a healthy collector’s market for old slide rules – I listed mine on eBay for 100$. The price might be a bit high but I expect it’s worth at least 70-80$.

Otherwise, a bag under all those doodads held a collection of banners, pennants, and patches, all of which look to be sports related. Some are from the Olympics, which might make them somewhat collectible.

I returned to CSL this week, but wasn’t able to reproduce the same level of success. We’ll see if next week is any better!

The finds at the “privilege” spot began to dry up after I came across that iPad, but I still managed a few nice gets.

I found a Tilley hat that looks to have never been worn. These hats are made in Canada (a rarity these days) and are considered “legendary” by many. I remember my dad having a very similar hat at some point. They look to sell for around 40-50$ used.

Here’s another like-new hat. This one went into my yard sale box.

I expect this hardly used Marc Jacobs purse will go for a tidy sum on eBay. 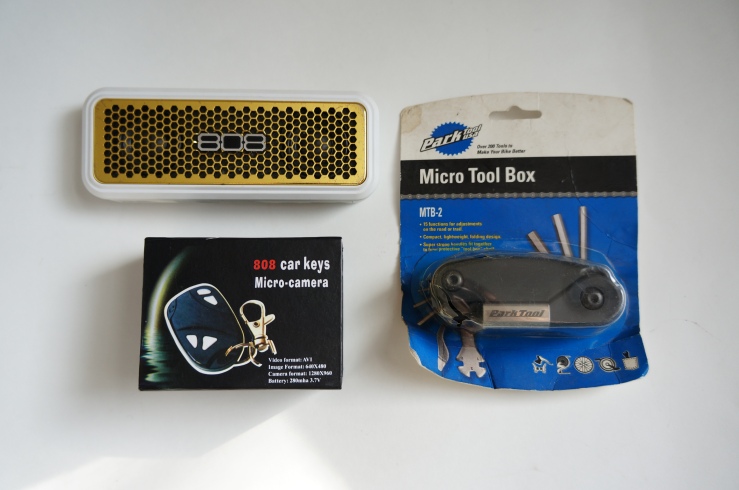 Here’s some random stuff, including a bike repair tool (never opened), a bluetooth speaker (which I sold recently for 27$), and a tiny camera made to fit on your keychain. 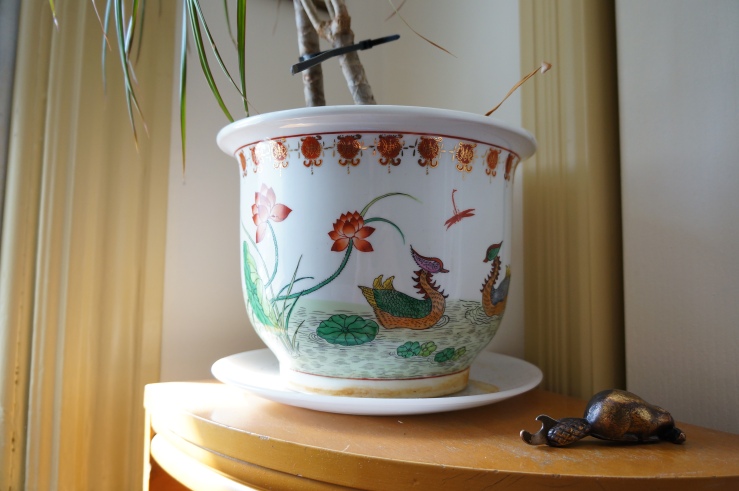 There were a few flower pots, one of which nicely matched one of my plants. 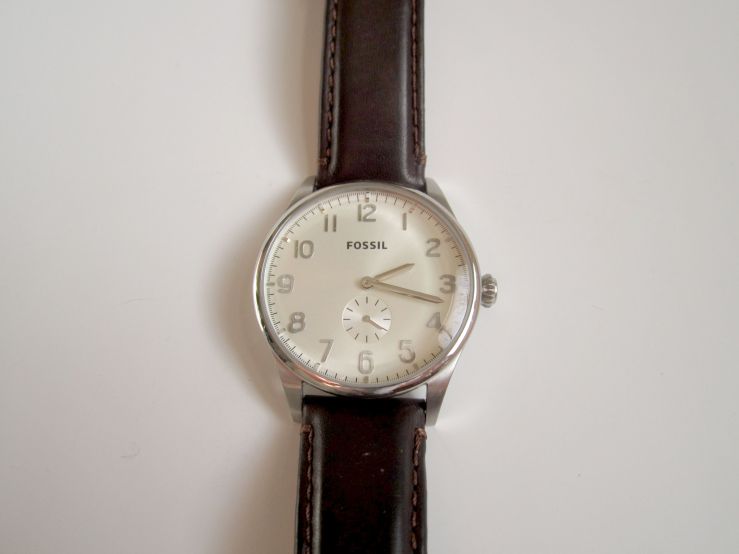 I also found a cool Fossil watch. It needed a battery, but I switched it out and now it works like new. It’s a nice design, and again looks to have been barely used. I listed it on eBay for 110$ + shipping.

The house now has a huge dumpster out front. The new owners are doing some renovations. That’s a common cycle actually, to the point where I now perceive the presence of a dumpster to be a missed opportunity. When I see them I always wonder if I could have found some great garbage there in the weeks and months prior, when perhaps the previous owner was getting ready to move or was clearing out the house. Either way, I can’t worry too much about that kind of stuff, as it’s clear I find more than enough garbage as it is!

I’ve made some other decent finds in the past few weeks, including a handful of change in the Plateau; …

… a debit machine, which is unfortunately missing a part of its power adapter (though this might be easily replaced – TMR);

… a gold-toned hammer of some kind (TMR); 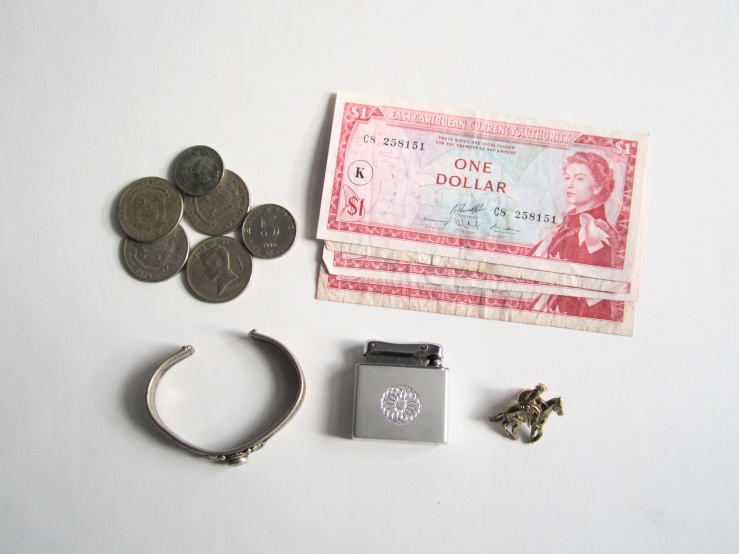 … some coins, old bills, and other stuff (TMR); 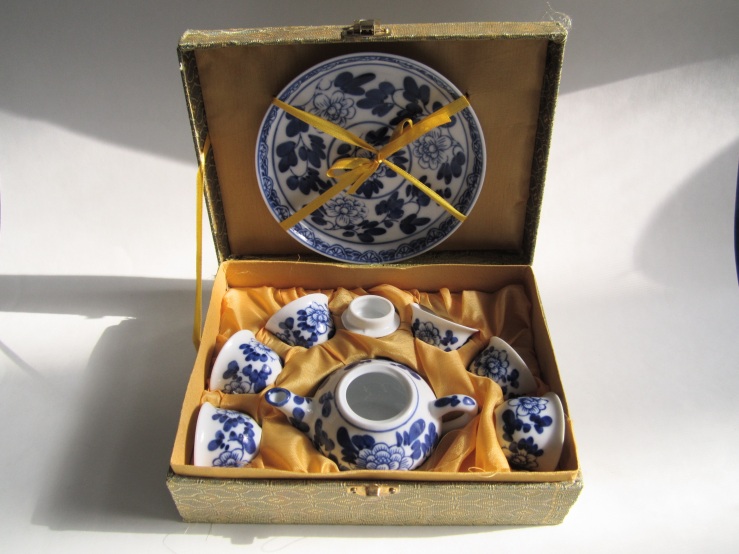 … an “Oh! Canada” board game / educational kit, which was distributed for free to Canadians in the 1970s by Trudeau appointee Keith Spicer in an attempt to promote bilingualism (Montreal West);

… an unusual, and probably hand made electronic device of some kind (any ideas as to what it was made to do? – Plateau);

… a camera / gimbal for a drone, which while likely broken still sold recently for a nice sum (TMR); 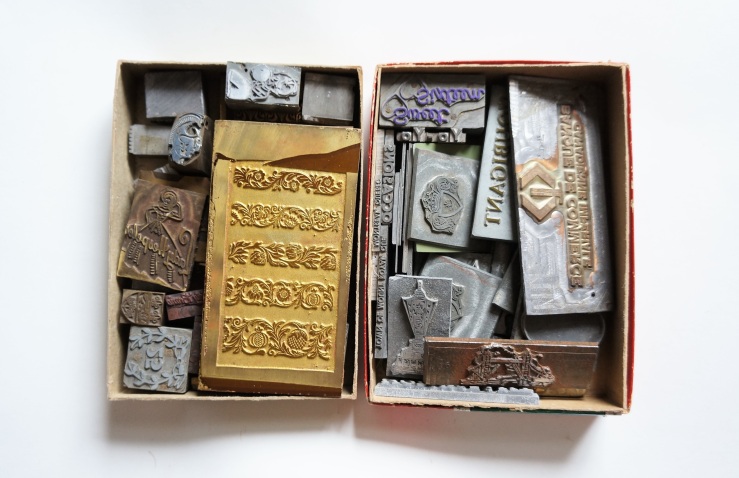 … and a few small boxes of printing blocks (Montreal West). These things are actually pretty cool. Many are solid and brass, and altogether they are very heavy. I think most were made between the 60s and 80s. I don’t expect they’re worth selling on eBay (particularly given the cost to ship a package that heavy) but I think they’ll be a hit at a future yard sale!