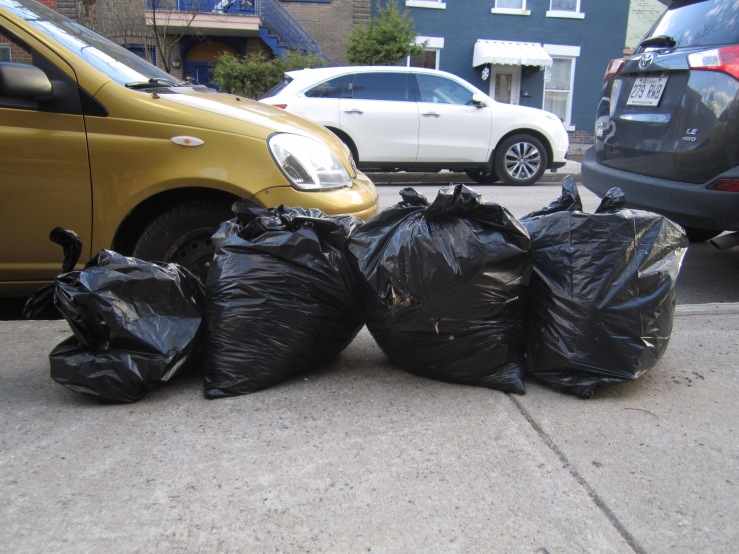 Spring cleaning season is finally here! It’s a good time to trash pick, but it’s also worth remembering that most people use this time to tidy up their yard. There’s more leaves and twigs and crappy patio furniture than treasures on the curb, and the past couple of weeks have only been average as a result. 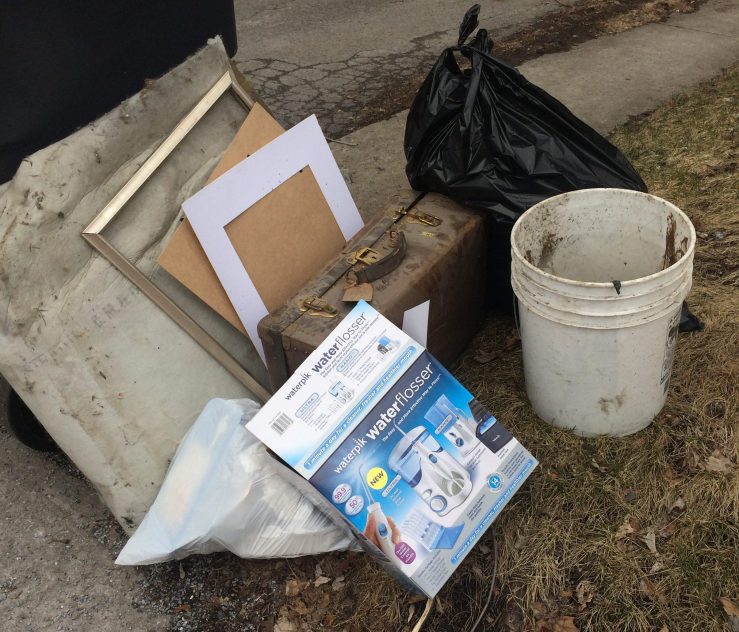 Still, my run last Thursday showed the potential of spring cleaning. This suitcase, for example was quite dusty and slightly musty. It had likely been in a basement for however many years, and maybe not looked at since the 70s. 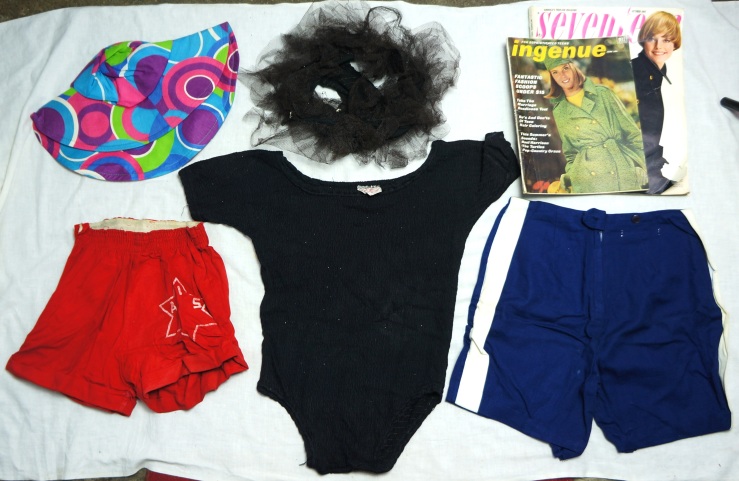 Inside was a collection of school workbooks, 1960s teen mags, some old gym shorts, a cool hat, and an old ballerina outfit by Johnny Brown. There was another nice outfit in there but I didn’t have time to get a good photo. I won’t get rich with this stuff, but I should be able to sell some of it at a future yard sale. 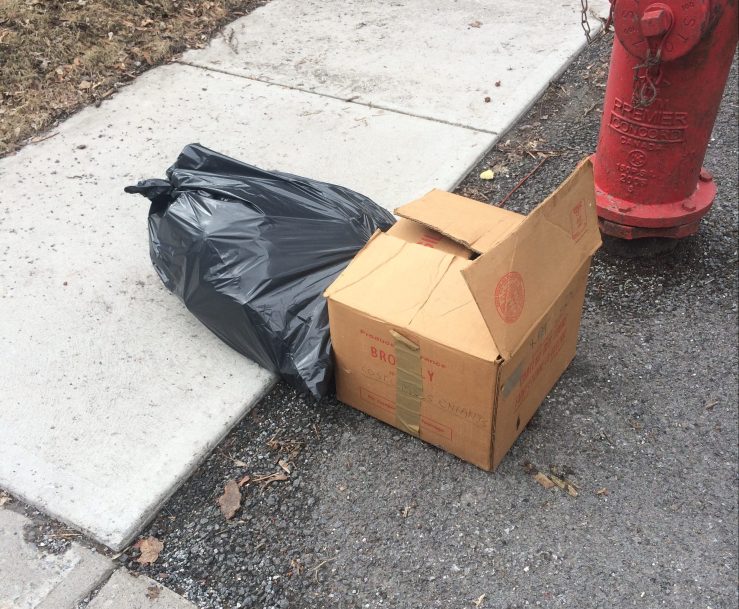 More profitable was a box I found not far away. It too was dusty (and also moderately musty) and had probably been in a basement since the 70s. 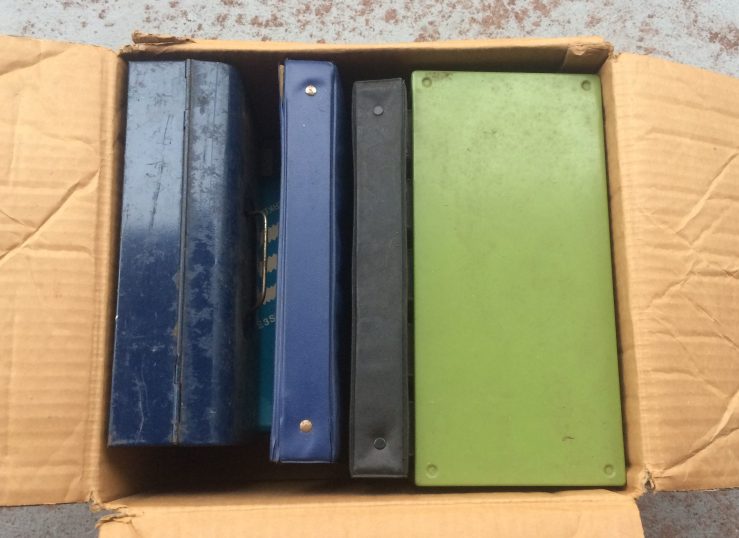 Inside was someone’s old coin collection. The newest coins were made in the mid-70s, so I guess that’s around when this person stopped caring. 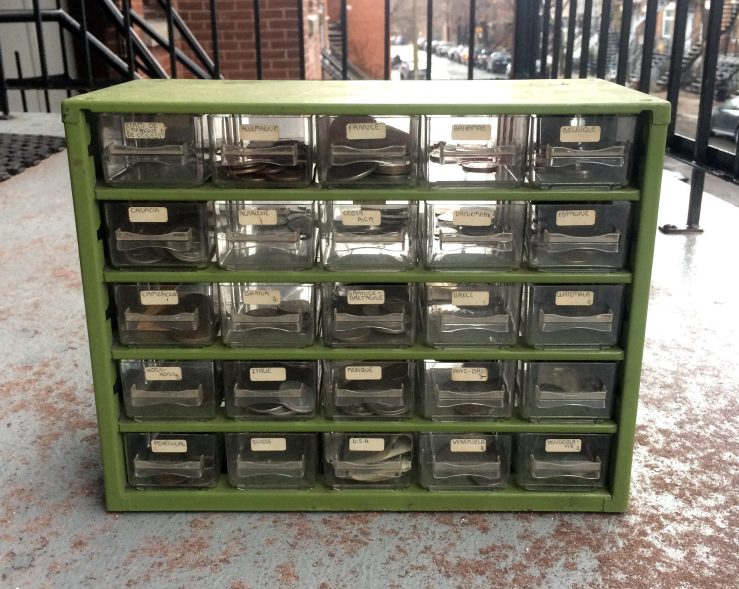 Many were stored inside this cute hardware drawer. 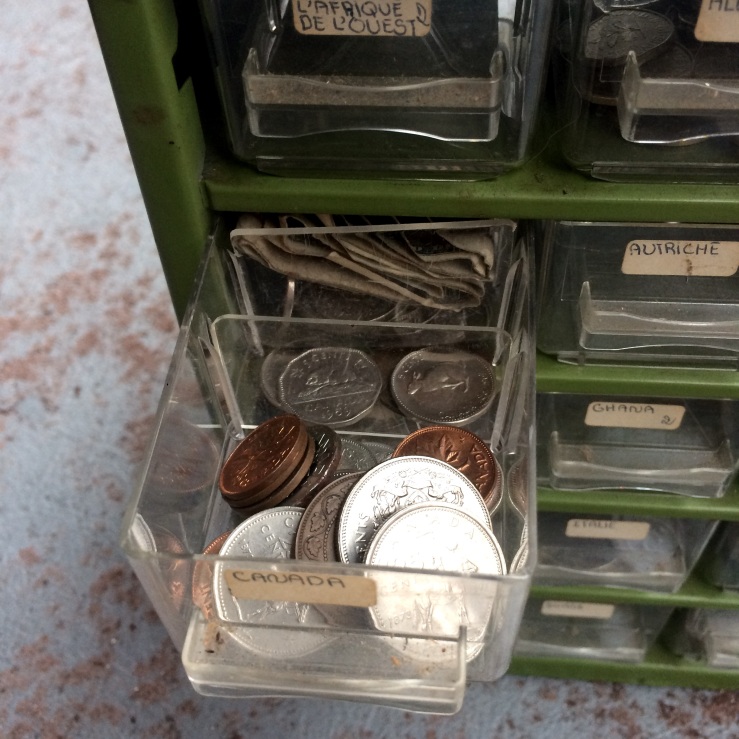 A look inside the “Canada” drawer revealed a stash of old bills. 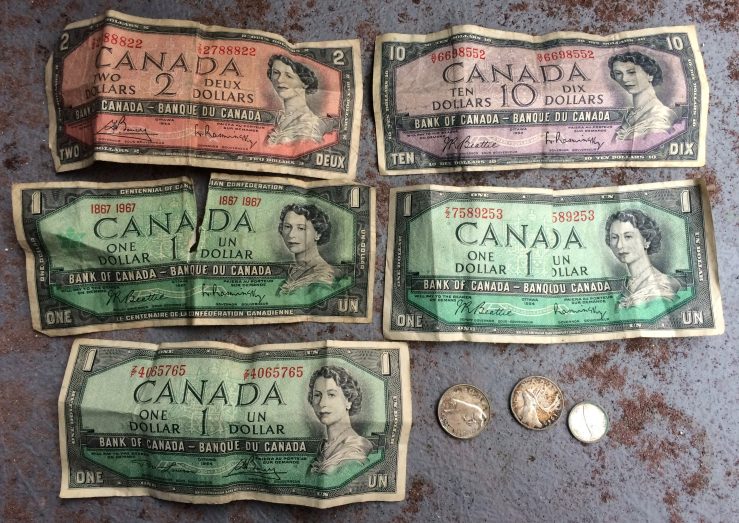 Most of the coins weren’t anything to write home about, but given the age of the collection I was bound to find some silver. Canada stopped using silver in 1968, and the States was mostly done with it by 1965. That drawer held those three silver coins, plus another quarter I only noticed later. 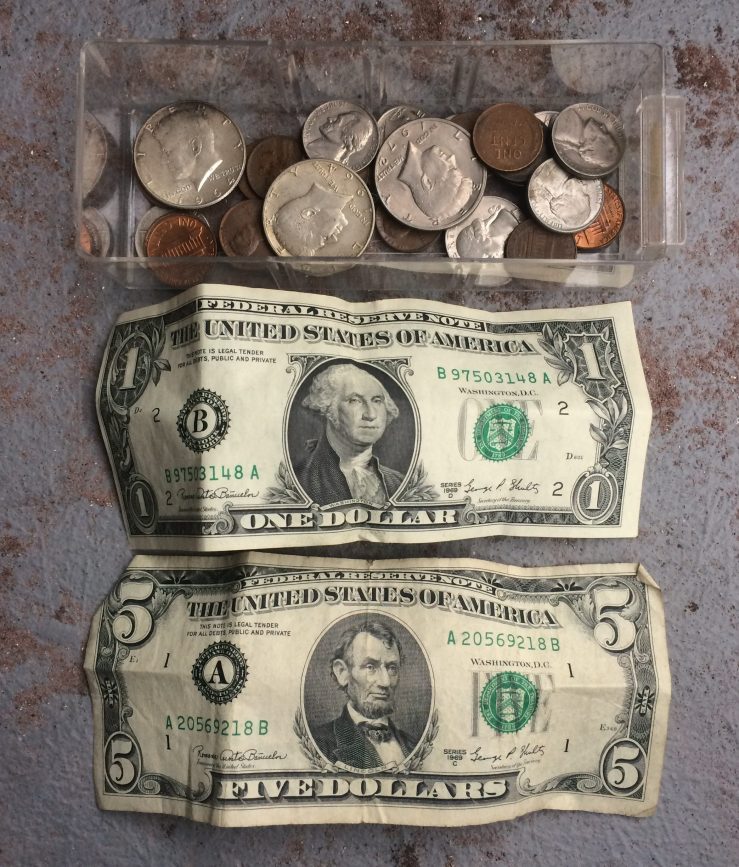 The United States section contained 6$ in bills and two 1964 silver Kennedy half-dollars. Those coins were the last half-dollars made of 90% silver, and as a result they were commonly hoarded. 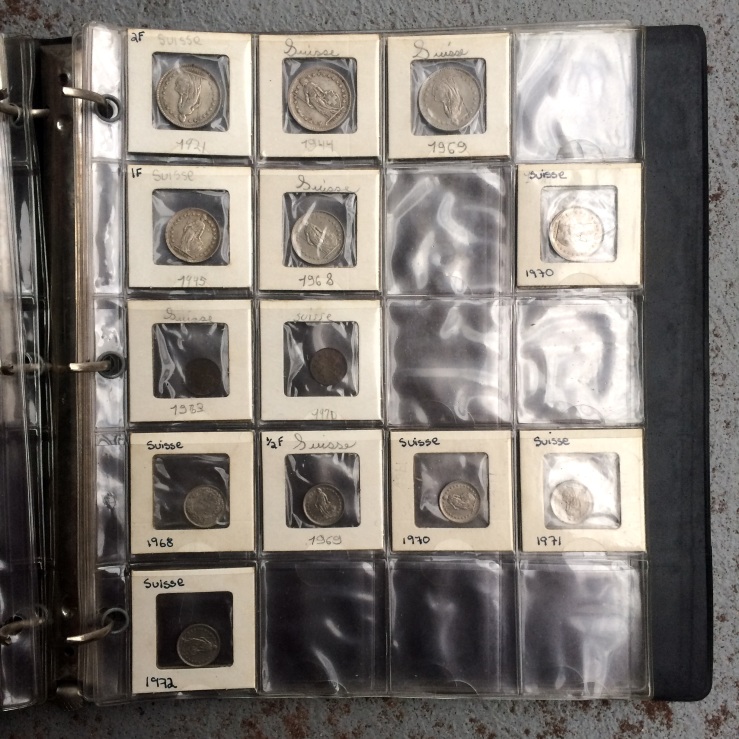 The two folders were also filled with coins, some of which were silver. 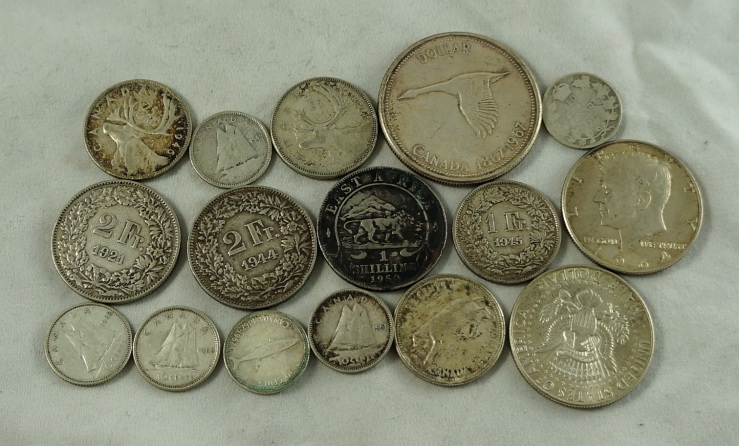 Overall I saved 15 silver coins including a few Swiss francs and a Canadian silver dollar (the East Africa schilling in the middle is apparently not silver after all). Together they weigh around 110g, a melt value of around 50$. However, I should be able to sell them for a bit more than that. 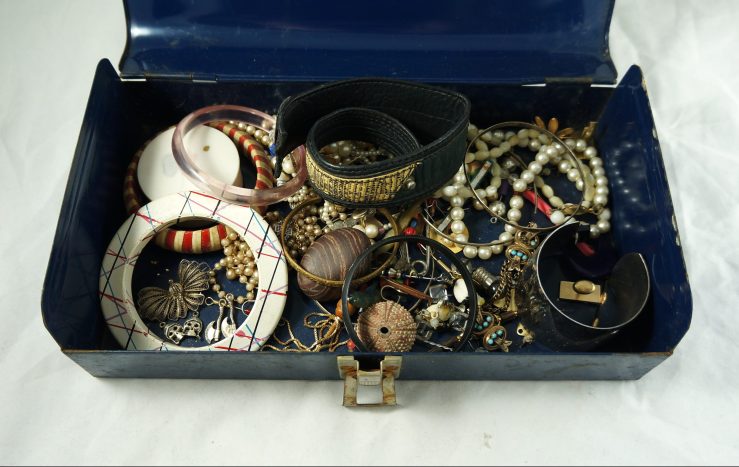 The little metal box contained a stash of old jewelry. Most of this isn’t particularly exciting, but there is a 10k gold chain and a few silver bits, including the unfortunately damaged butterfly brooch at bottom left.

I’d guess that these folks decided it was time to move on after holding onto this stuff for 40-50 years. In terms of garbage, that’s probably the best type of find spring cleaning season has to offer.

I’ve been pretty busy this past week. My sister went to the hospital with multiple blood clots, which wasn’t fun but she’s doing better now. My mom came to town for a couple of days to help out, and she tagged along on a couple garbage runs as well (we found some interesting stuff in Pointe St Charles and Westmount). Oh, and I also did the yard sale on Sunday. It was a great day weather wise, and I made about 650$.

The next week will also be busy. I have the vintage market this weekend (come out if you have time!) and I’ll be busy with McGill move-out day on the 30th and 1st. If the weather is nice I might do another sale next weekend, this time at my storage space on Coloniale – I really need to clear that space out a bit. I’ll keep you posted!