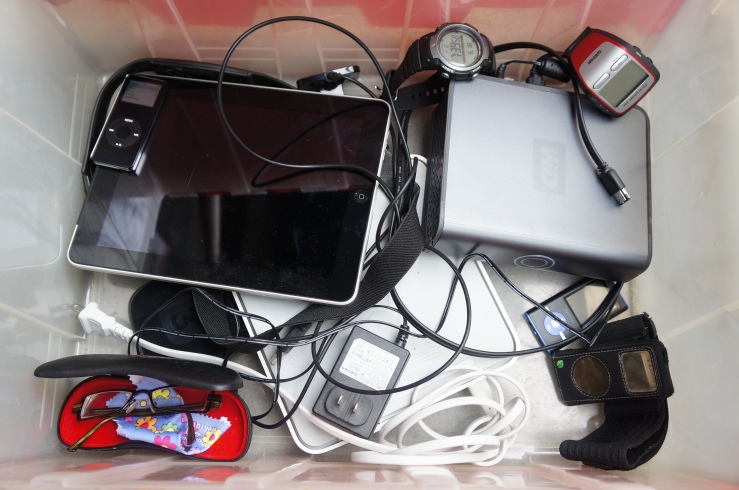 I’ve been pretty lucky with the rich people garbage lately. I came across a haul of electronic stuff a few weeks ago in Westmount, including: an iPod, iPad (though I can’t get it working thus far), Apple Time Capsule (basically, a router), Roku 3 streaming device, a couple of fitness / GPS watches, and some other doohickeys. This stuff isn’t worth a tonne, but I should be able to net around 150-250$ here overall. And, as I’ve mentioned before this sort of electronic stuff shouldn’t be in the garbage anyways!

I was biking around the Plateau that same day and found some more electronics, most notably this Samsung Galaxy S4 that seems to work totally fine. My guess is that they got a newer one and put this old guy in a drawer, where it sat before being tossed during a move. This cell phone is still pretty useful and is worth around 80-100$.

It’s funny, not long ago the Plateau was actually a low-income neighbourhood, but the gentrification here in the last couple decades has brought a fair number of rich folks to the area. The garbage has gotten a lot better as a result, though I find there is less cool vintage stuff these days.

Last week was one of my best in a while. It started with my finding all those vintage electronics (including the transistor radio) from the last post. Even better though was an epic pile of rich people garbage which provided a wide range of great finds – I’ll detail those in some upcoming posts.

For now I’ll share with you this digital camera (a Nikon Coolpix S9100) which I found in Westmount on Friday. When I first saw it the lens was open like in the picture above. I figured it was busted, but took it because it was relatively modern and I knew it was probably worth something even if just for parts or recycling. However, to my surprise it ended up working fine once charged (luckily, I also found the charger). It’s worth around 50$.

Otherwise, my current plan is to try writing shorter blogs posts more often. It’s a little easier to write shorter posts for a variety of reasons, and I think writing more posts will benefit my blog traffic as well. Anyways, we’ll see how it goes and I hope you like the change!

12 thoughts on “Short posts say so much”