I haven’t been getting lucky lately. It’s an inevitable part of the business – sometimes you’ll have dry spells and other times it seems like you can’t stop finding stuff. A lot of people vacation around this time, so maybe that’s part of the reason I’m not finding much. I could also be going to all the wrong places – maybe I’m just barely missing out on treasures one block or one neighbourhood away. Regardless, my luck is bound to change at some point.

eBay sales have been slow too. Recently I had a stretch where I didn’t sell a thing for two weeks. Thankfully I had a bit saved up before this so I’m not totally broke (unless you consider my massive student loans debt, of course). Also, eBay sales should pick up again once the cold weather / holiday season returns so I have that to look forward to.

This was one of my best spots last week. Perhaps my luck is already improving? 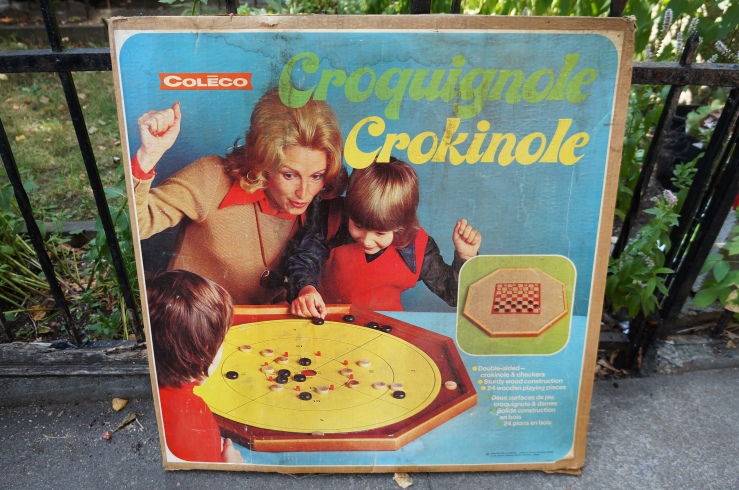 I wouldn’t have stopped if I hadn’t seen this vintage crokinole board leaning up against the iMac box – the pile just wasn’t that interesting otherwise. My new roommate has a really nice crokinole board, and we’ve been playing it a lot since we moved into our new place. It’s a great game, and apparently very Canadian – it was invented in Canada and the World Championships are held each year in the town of Tavistock Ontario. I didn’t know that until just recently!

It came in its original box, which features some great 70s cover art that we might use for decoration.

I checked the lone bag and was surprised to find some nice stuff inside. There was a small collection of jewelry, mostly service pins made for an employee of the Johnson & Johnson pharmaceutical company. The 10 year service pin is made from sterling silver while the 25 year, 30 year, and undated pins are all made from 10k gold. I also found a Zippo lighter made to commemorate the 75th anniversary of the Pfaudler chemical equipment manufacturing company and a bit of loose change, which for whatever reason included a 1916 British penny.

I figure the Johnson & Johnson stuff will do well as a lot, especially since the pins are made of gold. I wouldn’t be surprised if the collection ends up netting me around 200$. 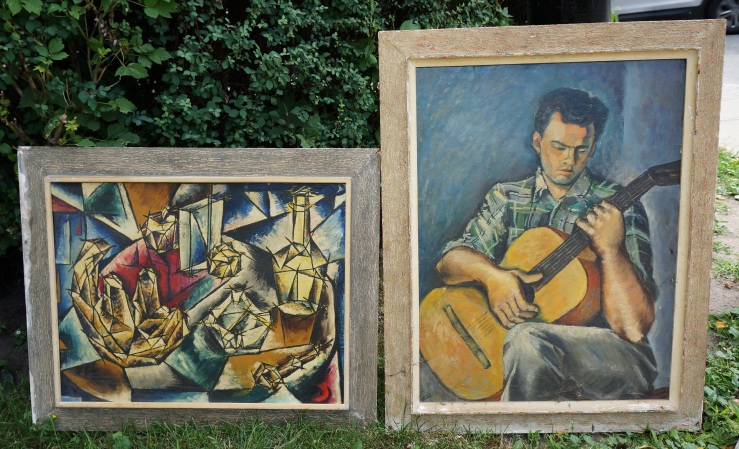 I saw these paintings on the curb while driving around Outremont. I assume both are amateur art pieces, probably done by the same painter. The one on the left looks to me like a cubist-inspired still life, while the guitar player is a more traditional piece (and pretty well done, from my point of view at least). They’re both pretty large, with the guitar player in particular measuring around a meter tall.

I ended up talking to the lady doing the tossing, who was helping to clear out her childhood home. She had no love for the paintings, and she seemed surprised that I’d want them. I asked if I could look through the nearby boxes, which were from the basement. Some of her family members had asked her to throw them out. Most of the contents were musty, and she was convinced that it was all junk. In the end though we ended up looking through the boxes together, which was kind of a funny experience. She hadn’t looked through them at all, and she actually found a family photo album that she ended up keeping.

There were some bags too, but she told me that those were definitely full of junk (she said that she had filled them herself). I never really trust anyone when they say things like that, since my whole job is reselling stuff that other people for one reason or another thing is “junk”, but sometimes it’s best to just let these things go. She didn’t seem very flexible on the bag issue. Regardless, we had a fun time and I’d chalk it up as a good public relations experience. All our conversation was in French, I (and by extension we) are probably missing out on a few interesting story details).

One neat thing I saved was this WWII-era United State Civil Defense helmet. Civil Defense was an organized, non-military effort to prepare for and deal with attacks on domestic soil and civilian populations.

If you zoom in you can better see the markings on the helmet. It’s not worth much, especially without the insignia but it’s still a great yard sale item.

Here’s some more cool stuff from the boxes. The tarot deck smelled a bit musty but was otherwise in nice condition. I was able to trade it on a Facebook barter page for some home cooked food. The metal bits to the left of the tarot are scrap silver, and the pouch in the middle is full of stickers from the 70s and 80s. 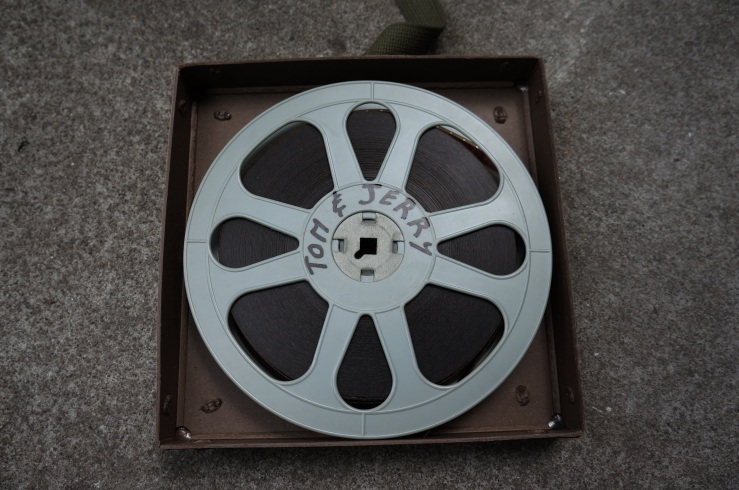 The box at top right contained an old Tom and Jerry film reel, specifically a short called “Carmen Get It!“. It was directed by Gene Deitch, who according to Wikipedia had a not well received run as the director of Tom and Jerry. However, this particular episode (which you can watch here) was apparently well liked. It might have a bit of value on eBay. 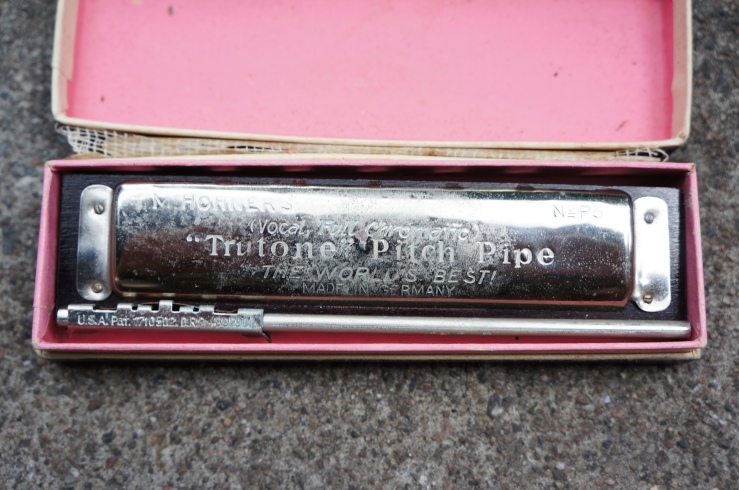 The little blue box at the bottom held a nice old Hohner mouth organ. It’s a little musty, but sounds great! I still have to try some of the must removing tips I got in my last post.

Finally, inside the little gold container were a few old Gillette razor blades. I put them up on eBay for a modest price.

Elsewhere in Outremont I found a collection of sunglasses, some of which are brand name and should sell for decent money …

… and a racist rubber doll from the 1940s. It was probably a squeak toy at some point but it sure doesn’t squeak anymore. The character is Chief Wahoo, the mascot / logo of the Cleveland Indians baseball team, and I’m pretty sure he’s holding a scalp in his left hand.

It was made in Akron, Ohio and was designed by Fred Reinert, who Wikipedia credits for drawing the first Chief Wahoo character back in 1932. It’s an interesting thing to find, that’s for sure.

This week has started off well enough. I don’t take my Sunday night runs particularly seriously (mostly I just want to listen to This American Life on the radio) but I ended up finding some decent electronics – a SEO T-102 tuner and an SEO preamp equalizer – that together should earn me around 120-150$ even if broken. Hopefully it’s a sign of things to come!