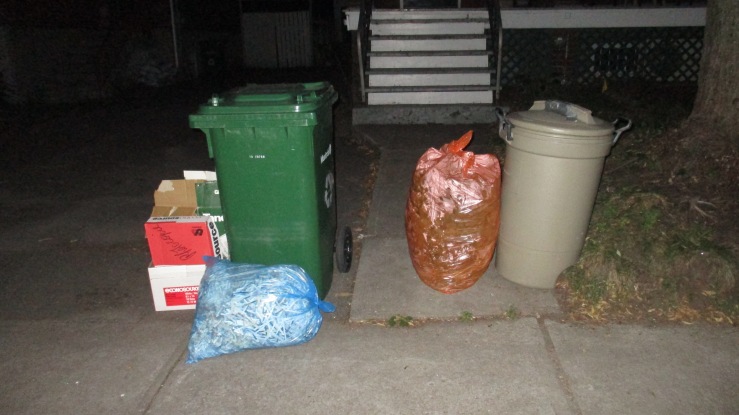 Monday night’s run in NDG was a good one, although it was mildly controversial. I was looking through this recycling bin and finding some interesting old ephemera when this lady (who I think is a neighbour of the person who owns this bin) tells me in French that what I’m doing is stealing. I muster a “c’est pas” (basically: “it’s not”) but my French really isn’t good enough to engage in grand debates about the legality of trash picking. I continue on with my work and try to ignore her – she’s putzing around on her deck with her husband at this point, obviously present but not particularly disruptive.

After a while she snaps a photo of me (probably a terrible one, because it was dark out and I don’t think the flash was on). I wave for the photo, not particularly concerned about any legal consequences. I was pretty much done anyways, so a few minutes later I clean up and move on having engaged with the people as little as possible.

As I said, I’m not concerned at all about the legality of it. I’m sure the police couldn’t care less. I’m mostly concerned that they’ll talk to their neighbours and make them paranoid about identity thieves. It could cause them to put out their trash in the morning instead, or perhaps shred more than they are already.

Now, about the spot. I’ve had my eye on the trash there since it provided me a couple old toy cars a month or so ago (these did not appear on the blog, but a couple are in my eBay store). Since then there has been the occasional interesting find, including some cool old books and some WWII-era buttons (the only find that made the blog). There always seems to be a bag or two of shredded papers – old taxes documents perhaps – but the trouble isn’t taken to destroy other (presumably less personal) papers and books. I suspect the people living there are planning on selling the house and are very slowly downsizing.

There’s often a bit of junk left by the tree on the right. This is visible in the post that mentions the WWII buttons, but not visible here because I snapped the photos later in the evening, after I already had taken the stuff and long after the concerned citizens had moved on with their lives. It seems like the homeowners are leaving things out for others to find as the items always could have easily fit in their garbage can. 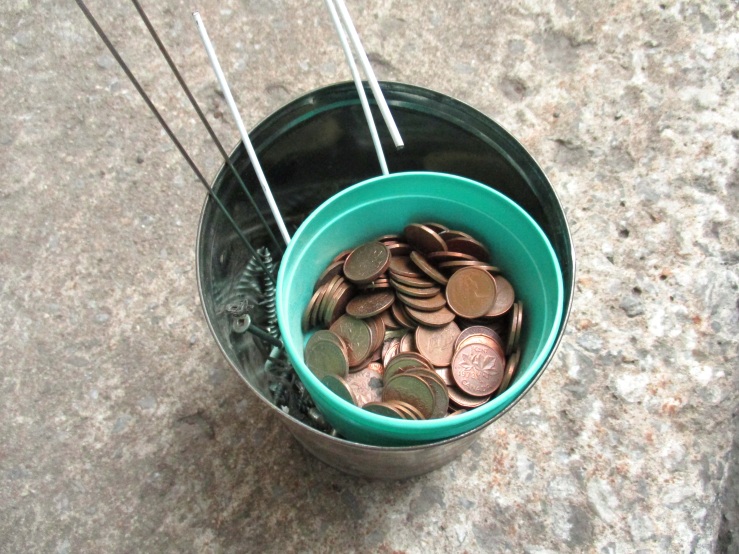 Anyways, I took home both items: a large tin filled with bric-a-brac (which was fairly similar to the one shown in the military button post) and a vintage desk lamp. At the top of the tin was a plastic container holding around 100 pennies, which I put into my box of found small change. 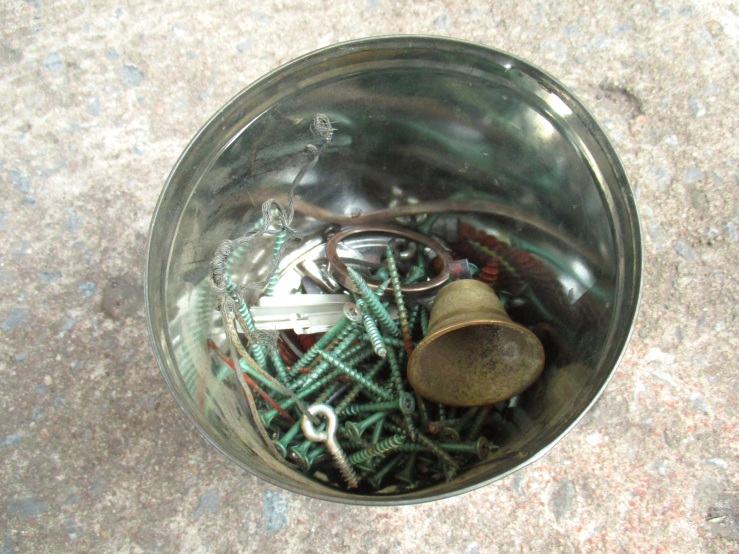 The tin otherwise held a bunch of screws but also a few other more interesting objects, a couple of which you can sort of make out in this photo. (Not the bell – it ended up in one of my free boxes).

(Just a reminder! All of these photos, particularly the scans later on are of pretty high quality. If you click on the image you can get a more up close look at each shot). 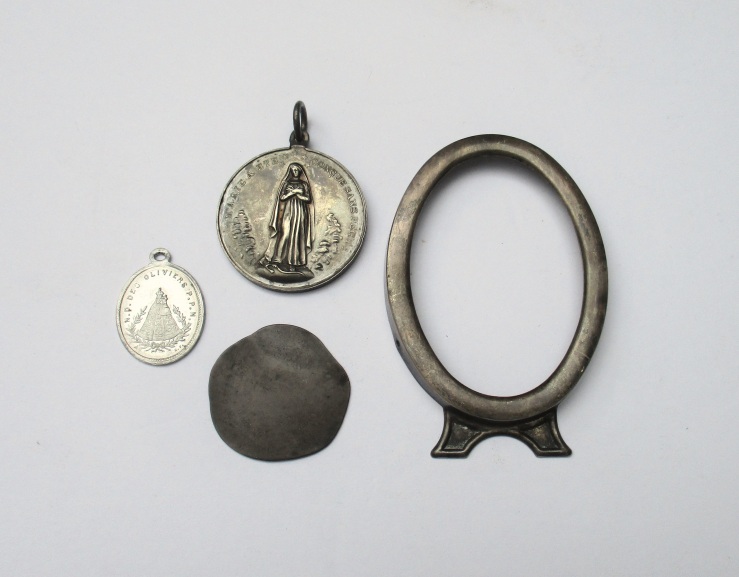 At right is what would have been a little silver picture frame. It’s marked Birks sterling. At bottom centre is a flattened coin, which I would guess would have been one of those big old Canadian pennies.

The most valuable piece of the bunch is probably this old catholic pendant. This side has an image of Mary and the words “Marie a ete concue sans peche” (Mary conceived without sin).

The other side shows an image of a heart and the latin phrase “Cor meum jungatur vobis,” which apparently translates to something like “Let my heart be joined to you.”

The bottom is marked sterling, making it an especially nice find. It’s a fairly heavy piece, weighing a bit over 20 grams (and so worth around 10$ if sold for scrap). It was apparently made by the Sodality of the Blessed Virgin, a Roman Catholic society whose history I couldn’t begin to attempt a summary of. If you know anything about them let us know in the comments!

As for value, it’s hard to say but someone in England is trying to sell one for 60 British pounds

Inside the recycling bin (where I was looking when that lady confronted me) was a small collection of ephemera, much of which seemed to date from the 1920s to 1950s. Here are two old brochures for Bermuda, one of which was published by Canadian National Steamships.

There were several different Canadian National Steamships menus, all of which were printed in the 1930s.

I also saved a few programs, including one to a 1934 Empire Day banquet …

… a couple of brochures featuring the Chateau Frontenac in Quebec City, which is one of Canada’s prestigious grand hotels (the one on the left is particularly beautiful and was printed in the 1930s);

… a notebook from the same era filled with a bunch of writings, some of which seem to be a copying down of that person’s favourite quotes;

… and a old book (“The Bride’s Book“) published by Henry Birks and Sons.

The book isn’t dated, but given the design I expect that it too was made in the Art Nouveau era.

The book is around 20 pages long and describes the proper way to do a wedding, including sections on: the responsibilities of bride and groom, the engagement, the invitation, the announcement, the order of procedure, wedding gifts, the wedding breakfast and more. It’s a cool piece in excellent condition for its age. I can’t find any reference to it online so it might be a good thing for me to scan and upload. 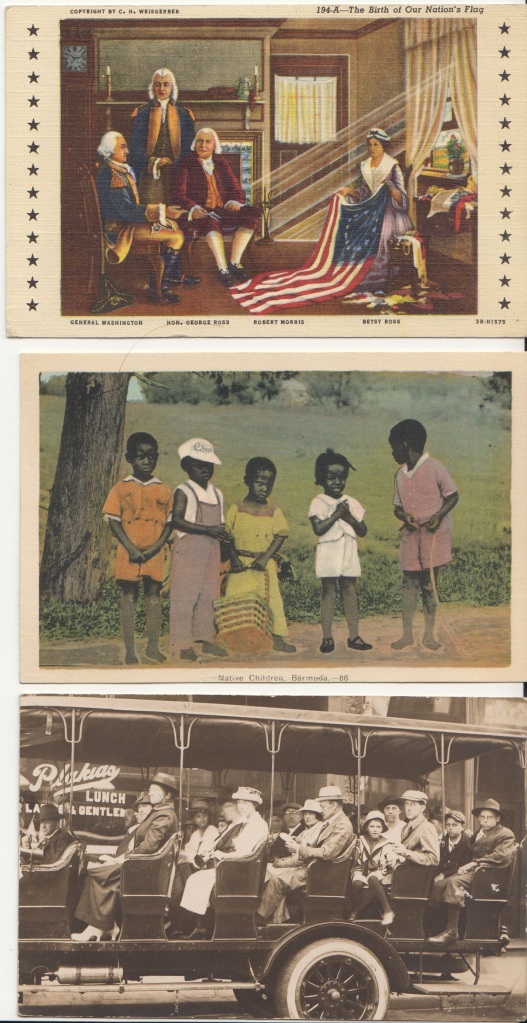 Otherwise, I found some cool old postcards (any ideas where “Plakias Lunch” might have been?) … 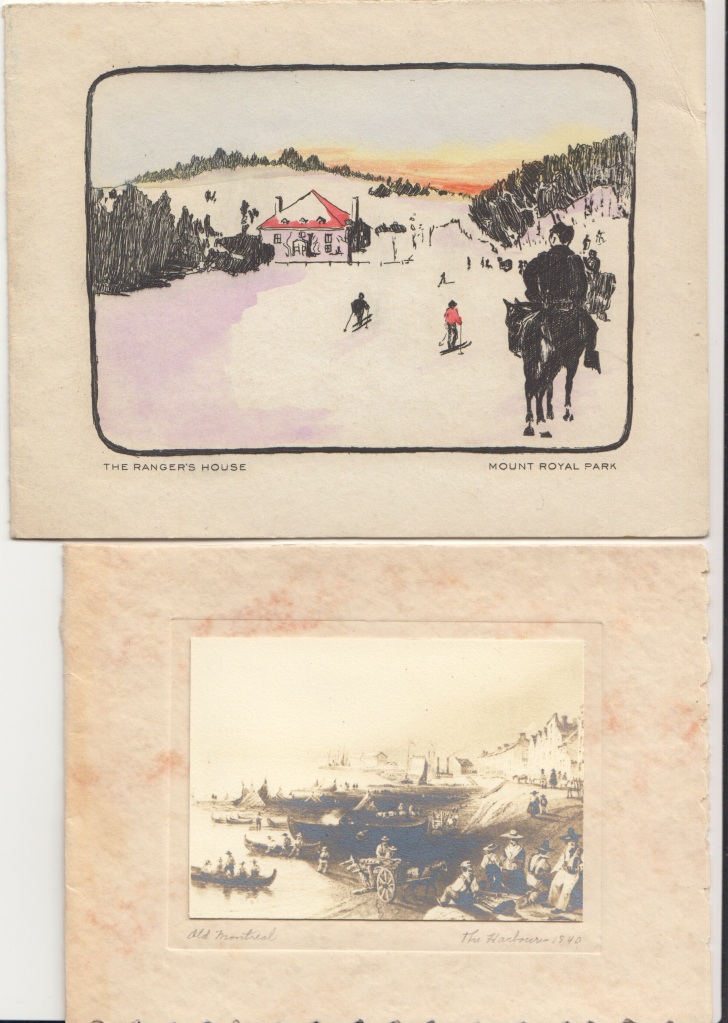 … and two of what I would assume to be old (my guess is the 1930s again) souvenir greetings cards. They fold open to reveal a blank spot for writing. I’m not sure how the one on the top was printed but you can feel the ink around the blank parts. The bottom features a photo marked “Old Montreal – The Harbour 1840” which I’d guess is a reproduction made in the 1930s.

Let’s finish off with this little work of art (the paper itself is about the size of a postcard). It appears to be signed by a guy named Bernhardt Wall, who in the early 1900s was known as the “Postcard King” because he designed so many of them. It looks to be an original etched plate print, one which I can’t find reference to anywhere else. I don’t think this makes it particularly valuable but it is pretty cool.

I have some other stuff from that night to share with you. Expect that post sometime in the near future!