… only bad equipment. Or so I was told by someone at some point. I knew it was going to be cold this morning, -35 with windchill, but I wanted to go out on my usual run to TMR. There were a couple of places that were producing consistently if modestly and I hate passing up the opportunity when I think I have a “lead.”

I bundled up warm (many thanks to the room-mates who provided me with some useful items, including two balaclavas and a pair of over-mitts) and headed off into the cold. What was surprising is that with all this gear on I barely felt cold at all. There were a few points where my feet got pretty cold, but by keeping moving, wiggling my toes and staying in the sun as much as possible I generally felt pretty comfortable.

Also surprising was the amount of time I ended up being gone for. I left around 7:45 and got back around 11:45 with no heat breaks. I was outside for about four hours, the longest run I’ve had this winter. It helps that I really enjoy my TMR route but it’s interesting how quickly time passed and how little the cold affected me.

Anyways, I was able to spend so long outside because I had lots of things to poke through. I made a bunch of decent finds, even if nothing in particular stands out as spectacular. This spot was one of the two “garbage producers” that I wanted to check out. It’s where I found the bullets last week and the silver doohickey the week before, among other things. 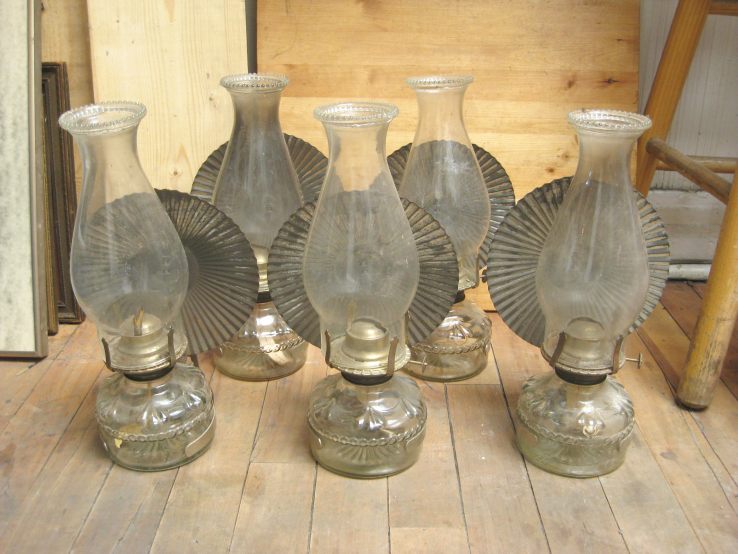 This week I was offered these vintage oil lamps made by Eagle in the USA. They come with light reflectors in the back. There doesn’t seem to be anything wrong with any of these, though they need a good wash and there’s a bit of surface rust to be scrubbed off some of the metal pieces.

These have some value, similar ones sell for around 15-20$ on Ebay. The shipping costs though seem to average around 50$, a hefty sum probably due to how fragile the glass is. That shipping price makes me wonder if people are willing to pay closer to 60-70 bucks for a nice oil lamp. 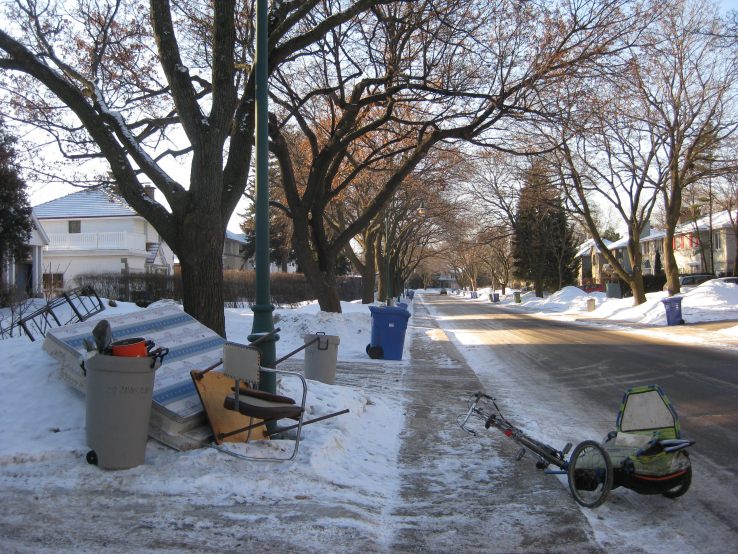 Garbage producer number two. Both of these last two places seem to be very slowly cleaning house. This is where I found the blood pressure device a couple weeks back. My feet got pretty cold from hanging out here in the shade for too long. 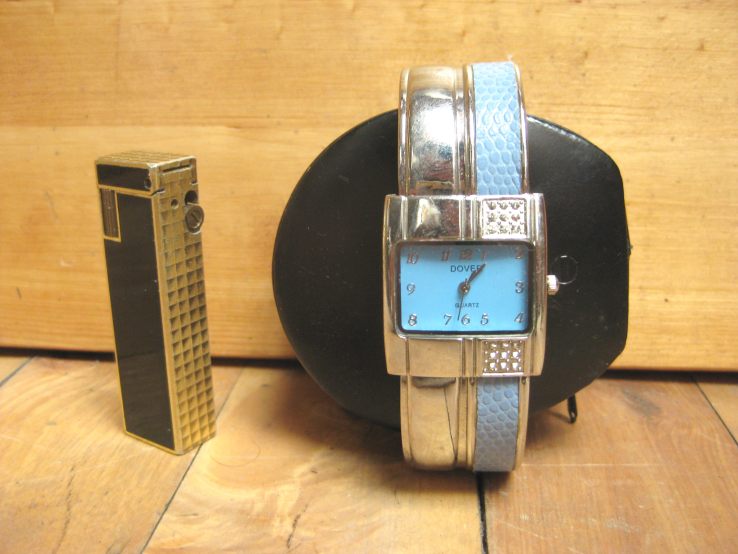 There was also a decent watch and vintage lighter, a Benlow by Colibri. Assuming they work these should sell for 5$ each at a yard sale.

There was also this odd thing. At the bottom of each strand of fishes is a gun, a sword, and a took (the longest). On the sword is written “Amara.” It looks pirate-ish and could be some kind of charm. At the least it makes for an interesting decoration, and could potentially be part of a good Halloween costume.

Later I went to a part of TMR that I usually don’t cover. Usually when I get to the little area west of Lucerne the trash is already picked up. Today, however, I noticed that the truck had not yet passed. I’m wondering if they changed the route around, there’s some other places where the truck seems to be coming earlier than usual.

I made some good finds on Norway, a road which I’m pretty sure is the western boundary of TMR.

I noticed this mandolin in a case right away. When I picked it up a woman opened her front door and told me that it was broken and fairly cheap. Apparently it belonged to her husband and he’d had it since the 1960s. She was quite nice.

The main problem is that the neck is being pulled off by the tightness of the strings. It may be something that just needs some glue or it could need to be bolted in place. Either way, I know a lot of musicians and I’m sure one of them would be willing to take it on as a project. It’s quite nice looking cosmetically, so even if it’s unfixable or not worth fixing it could be used as a decoration.

There was also a nice old camera bag filled with various vintage camera and developing equipment. There’s a few pieces here (and still more in the bag) that have some mild value but it’d be annoying to sell them all individually. Maybe I could make some decent money selling them as a lot.

Another nice find was this Kodak Rainbow Hawkeye folding camera. One similar to it sold on Ebay for 45$, though it was slightly cleaner and came with a box. This one’s probably worth around 25-30$, assuming I’m right in thinking that there’s nothing really wrong with it.

In another spot were a bunch of boxes full of junk out by the curb. Most wasn’t particularly interesting but I did take this wooden keg. It’s around two feet tall. Does anyone know what this might have been used for? Is it just decorative or does it have a practical function? It seems pretty solid. At the top is a piece of paper with “No. 7” written on it.

This pile held a bunch of stuff that looked to have belonged to a teenager. I’d bet that whoever it was moved away from home a few years ago and were asked to clean out their old room. 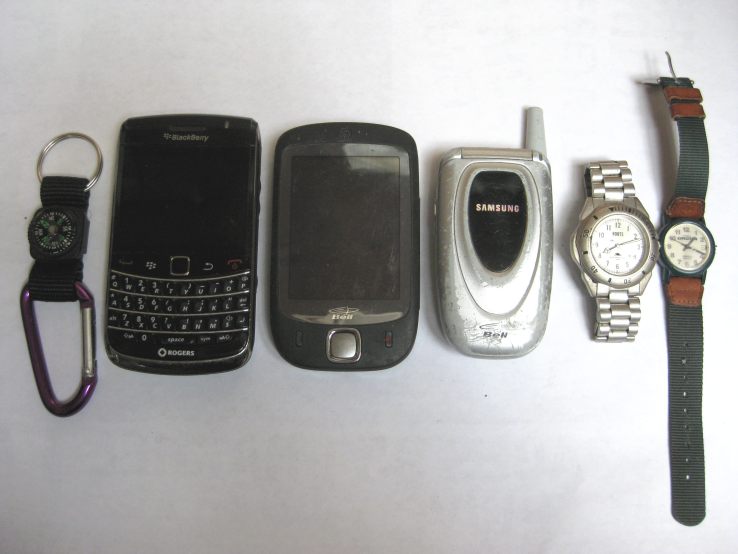 There were a few cellphones and a couple watches. The best item from this bunch is the Blackberry Bold 9700. It has a broken screen but would still fetch around 10-20$ by itself on Ebay “for parts or repair.” I have enough cell phones now to make a nice lot but I think I’ll wait until the end of the month. I’ve been finding a lot of cell phones recently and I might find more as people move before the 1st. 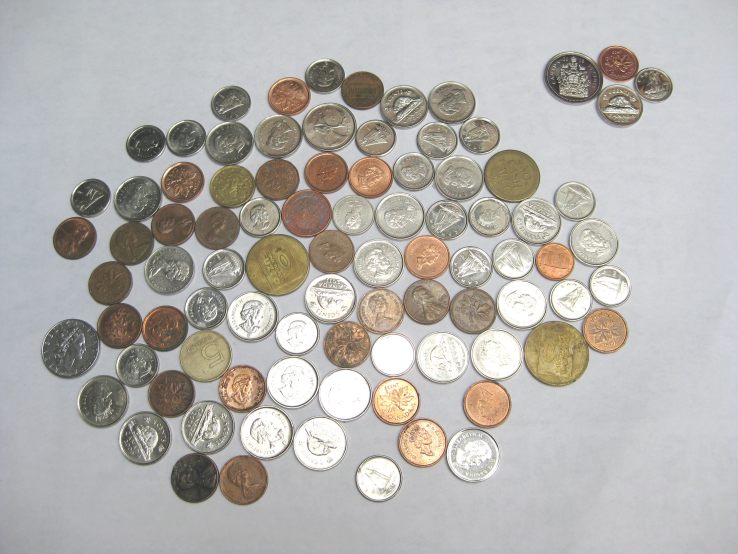 Again I find a bunch of change, including a 50c piece that was still in its original mint plastic. There were also a few foreign coins and a couple of arcade tokens. In total there’s around 4$. Easy money!

Last but not least is this old iPod Mini, vintage 2004. I charged it with my docking station (also found in TMR) and it works fine. I was surprised to learn that there’s still a market for these, they sell for around 20$ on Ebay. They’re old but I guess they’re still pretty useful, though I’ve never owned one personally. I’ll probably sell this one at a yard sale.

I’m pretty tired from all the biking (I also didn’t sleep well) and I’m going to take a nap. Tomorrow I head off to Rosemont in hopes of finding more neat stuff around where that silver envelope sealer was. I’ll keep you posted!

24 thoughts on “There’s no such thing as bad weather”