It’s around spring cleaning time, meaning that a lot of people are sorting through their stuff and giving away what they don’t need. However, much of what is given away doesn’t make it to shelves.

Over the last few weeks there’s been a lot more trash to the side of this church “friperie.” Most of the trash has been clothing and kitchenwares. Some good stuff has been thrown there – my friend found a clean, functioning food processor.

Just around the corner is the trash for the Petits frères second-hand store. There’s bins of the same kind of stuff – clothes, shoes, books, records, puzzles, kitchenware and so on – out every garbage day. 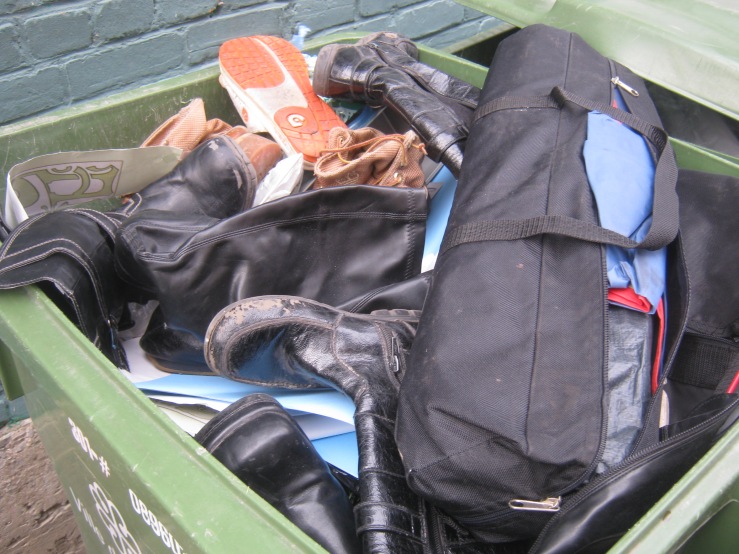 One of the bins seemed to be entirely full of boots and shoes, all of which looked good, even if they all weren’t particularly special. I took the kid’s tent (on top) and left it on the curb near my apartment. When I checked back later it was gone.

This bin had an assortment of unbroken glassware and other household stuff.

It’s not great seeing how so much of what is donated goes to waste. However, it’s largely a testament to just how much stuff exists in our society and how difficult it is for these stores – some of which are quite small – to deal with the massive quantities of things they get (often at the same time) while trying to make sure that they raise money for their cause.

It’s just a shame that even when we go out of our way to try to share our things they end up in the landfill. I don’t think the problem is an isolated one – most second-hand stores that I’ve checked are the same way.

I’ve thought that having a second-hand warehouse that takes all (or most) of what second-hand stores don’t want would be a good way to keep these things in circulation. That way people in need, or the non-profit organizations who serve them, would have access to this wealth of resources that otherwise goes to landfill. People who know how to repair electronics would have a constant source of projects and income; those who know how to mend would have an unlimited source of fabrics and buttons; and so on. The list of things that the right person could recover from this trash, even if just for copper wire, is endless.

In these uncertain economic times I think that using all the materials and products that exist right now to their full extent is important. If these things exist anyways (or could be repaired, re-purposed or reused) why do we need to spend money buying new ones? Why do we need to ship over new dishes or clothes from China? Why do we need to mine or produce more resources to create these new things?

This would not completely end the need to consume, and I think that the government would have to play a role in creating incentives for this to work. However, I think an increased focus on reducing waste is a great way for individuals, communities and states to become more economically self-sufficient, and thus less dependent on global economic trends.