I’ve had a good amount of success lately. The only thing I haven’t been finding much of (since the Tiffany necklace haul at least) is quality jewelry, though I did find a single gold cufflink worth 100$ for scrap & a silver bracelet on Sunday night. Let’s hope that’s a sign of more precious metals to come!

I’ve gone on a few extra runs lately because the weather’s been so nice. One day I went to NDG / “Westmount adjacent,” where the trash is picked up in the late afternoon / early evening on Tuesday. These bags contained some treasures that made up for what would have otherwise been a pretty unproductive trip.

If I were to guess, I’d say that this stuff belonged to a well-to-do kid clearing out their old room. They were also pretty meticulous, as many of these things were stored in little ziplock bags (like you see with the post-it notes).

I presume some of these things were unappreciated gifts. A never used wallet, a Swiss Army card that also looked unused (and which is now in my wallet), a still sealed “Med School in a Box,” a silver pendant in its original box, and – most profitable for me – a pair of seemingly brand new Ray-Bans. They should sell for an easy 100$. Otherwise, I saved an iPod, a iPhone 3 (which people these days more often use like an iPod), a coin bank with some spare change inside, and a small collection of toy cars. 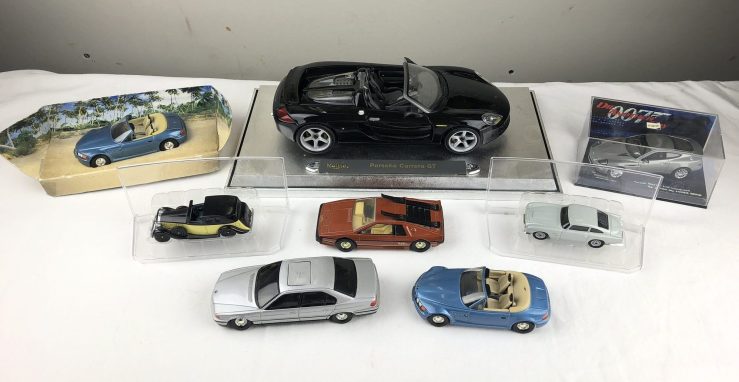 All these cars were either new-in-box or in very nice condition. They went to the auction, and they’ll be sold for whatever price they go for in a few days.

A month or so ago I shared some nice glass finds from a place in Hampstead. I ended up finding a few more nice bits there, though these finds signified the end of the line for these particular rich folks, who appear to have since moved. Anyways, those blue decanters did very well at auction, selling for 90$. The crystal decanter with yellow accents sold for 30-something. The fancy remote control needs a new battery, but should still sell for 40-50$.

I’ve been biking around the Mile End more often thanks to this nice weather. I’ve had luck finding yuppie trash, rich kid moving trash, and random metal bric-a-brac that’s been sitting in a garage since the 60s trash. I’d say this pile was a combination of number 1 & 2.

It looked as if this stuff belonged to someone who worked at one of the nearby software companies. I found a like-new Atari hat, a Carlos Delgado commemorative baseball (he was one of my Grandma’s favourite Blue Jays), a nice desk lamp, a nearly full bottle of laundry detergent, some expensive markers (which appear to be schwag), a couple sets of Blood Bowl game dice, a loonie, and one quarter.

I saved a whole bunch of video games and a still charged bluetooth keyboard. Unfortunately, PC games are apparently locked to a single device these days, so these are basically garbage.

I also found empty boxes for high-end gaming equipment, like a XBox “Elite” Controller (which retailed for about 200 Canadian dollars) and a fancy computer power supply. They weren’t worth anything, but they did indicate that the previous owner was willing to spend good money on gaming related stuff.

My best find here was a World of Warcraft Alliance beer stein. From what I can tell these were originally sold for around 99 US dollars, but because they were limited edition they now seem to be worth more than that – the only one like mine I found on eBay sold for 275$. This one’s in pretty good condition, other than a small scuff on the pewter, so it should end up earning me a nice chunk of cash.

Sticking with gaming stuff, I found some quality Nintendo stuff at a short-lived “rich people moving” spot in TMR. Nintendo gear is super easy to get good money for at auction. The games are currently part of a lot (current bid: 36$) ending Thursday evening.

Last but not least, thank goodness for detours! I didn’t notice this piece going one way, but definitely noticed it when coming back the other direction.

It’s hard to imagine why someone would so casually dump an antique cast iron Peugeot A2 coffee grinder, but I’m rarely surprised at this point. This was made in the late 1800s and is in great overall condition.

I found a few examples online that sold in the 300-500$ range. I decided to bring it to the auction, partly because it would have been a pain to ship, and partly because I think Montreal is a great market to sell something like this in (hipster coffee shops are plentiful, and there are lots of French people, ie: people from France who love the Peugeot brand).

It was listed on the newest auction Sunday night, and has already met my reserve price of 100$ with over five days to go. I probably should have set the reserve higher, but I’m confident that it’ll all work out in the end.

Anyways, there’s lots of garbage yet to show you. These days, my finds and my picture taking are outpacing my writing. If I get more into a writing headspace, you could see more regular posts.

7 thoughts on “Adventures in trash picking”