Let’s go back to the early summer, when it seemed like there was a new crank or curmudgeon around every corner. This particular model sounded British, wore a bathrobe, and asked rhetorically if he had to call the police. If I remember right I used some of these nice rocks to try to persuade him to let me do my thing. To clarify, it was more along the lines of telling him “I just want nice things, for example these rocks” and not “I will hit you with these rocks if you don’t let me pick your trash.” Regardless, he was not convinced. The rocks ended up making a decent auction lot, selling for somewhere in the 20-30$ range. 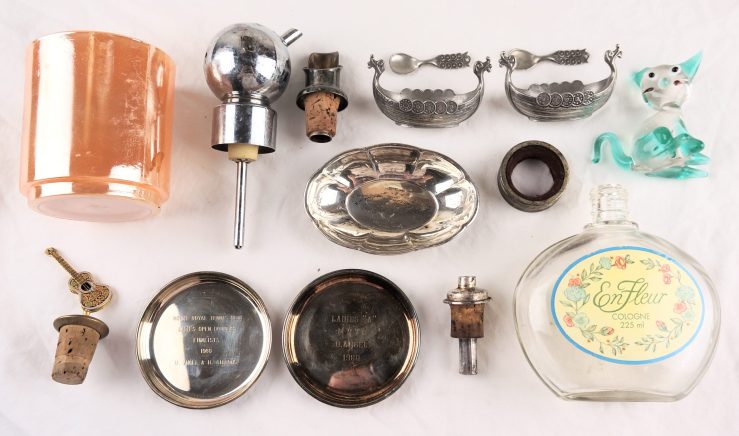 I found some decent stuff here in the weeks prior, and a week or two after our meeting, but this spot didn’t produce for long. That little dish in the middle is sterling and those viking ship salt cellars are pewter. The little coasters on the bottom were silver-plated brass – the engravings made them less marketable so I decided they were best sold as scrap brass.

This doohickey is pretty cool. It’s a KLM (Dutch airlines) bottle stopper that dates to sometime before 1961. It’s silver plated and should sell for around 50$.

One day I saved a whole bunch of tools, including a nice set of mostly vintage “Union Twist” drill bits that should fetch a bit of cash online. 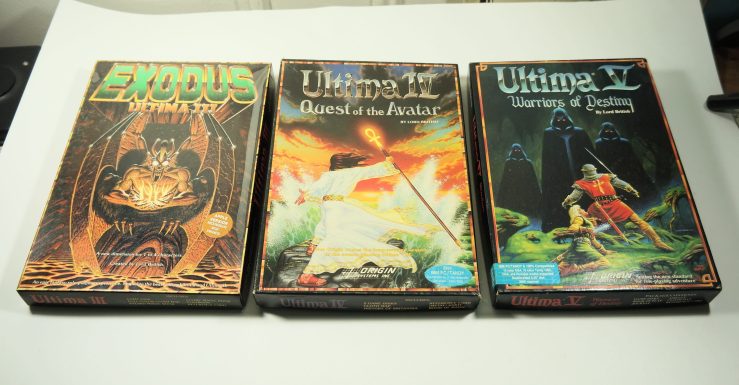 My most valuable find ended up being old software, particularly this set of mid-1980s Ultima games on 5.25″ floppies. The disks came in big boxes with cool cloth maps and lots of game-related books. This all sat on a shelf in my garage for many months before I finally brought it home yesterday to list. Upon doing that, the lot sold for 180$ within about 10 minutes. I probably could have made a little more money here, but I can’t complain. I wonder if I missed out on more titles in the weeks before I first arrived.

I also found a load of old Apple programming books here. They weren’t worth too much individually but probably would have done well enough as a lot on eBay. I never got around to it though, and they ended up in one of my yard sale free boxes. There’s so much stuff that I could theoretically list online that I have to be a bit choosy sometimes, lest I become overwhelmed with junk.

Let’s finish with these old Mac Mags, which are from the mid-80s and are probably pretty uncommon at this point. I doubt they’re worth much, but they might be interesting to a local collector. I’m starting a collection of things that I think would be best sold at flea markets or vintage sales, and I think these mags will go in with that lot.

Speaking of that, it’s in my plans to try selling at some kind of vintage market this winter. I haven’t gotten around to actually taking steps to make that happen, but it’s a good idea in theory.

2019 is nearing an end. Despite the numerous grumps it was a great year financially and I found a lot of interesting trash. I’ll try to get a “best of” post up soon, ideally before the new year but we’ll see how it goes.

11 thoughts on “The curmudgeon”