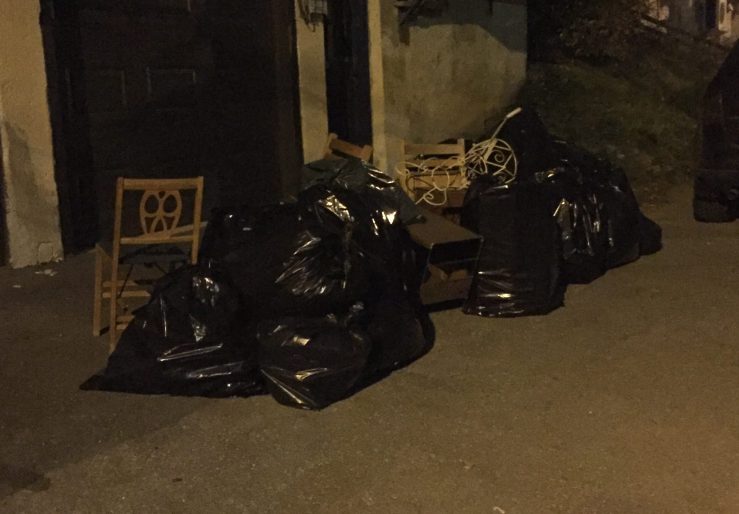 Let’s go back a couple of months to this pile I happened upon in Cote-des-Neiges. I met a woman involved in the tossing and she told me they were clearing out an apartment that had been empty for years.

A lot of the stuff in there was pretty old. I found a few interesting radios, including these little transistors. The Sharp sold for 13$ at eBay auction, which was a bit disappointing as I know I could have gotten more using a set price. The market for some transistor radios is pretty good overall, but I guess there’s a lot of models to choose from, thus making an auction for any individual radio a bit risky (unless it’s one of the most collectible models of course). I added the Zenith to a portable radio lot that did well at the local auction house.

This old Candle 12 Transistor is pretty neat. It works, though the controls are very quirky. I’ll likely bring it to the local auction once their vacations are over.

This portable tube radio is definitely the oldest of the bunch – it probably dates to the early 1930s (“Patented 1916-1932 inclusive”). It was made by General Electric, but the exact model number was erased by the rust. It was probably high tech for its time!

I couldn’t find anything quite like it online, so if you happen to recognize it please let me know! To view a close-up of the photos below, scroll to the bottom of the screen and click “view full-size.”

A few of these pictures aren’t great, but at some point I figured crappy photos were better than none at all. I still have to replace the photography umbrella bulbs that were stolen during that crazy yard sale, and it’s harder to take photos outside in the winter. Anyways, this is a beautiful mid-century portable record player made by Philips. It didn’t work at all, but still sold for 44$ at the local auction. It’s very much in style at the moment. 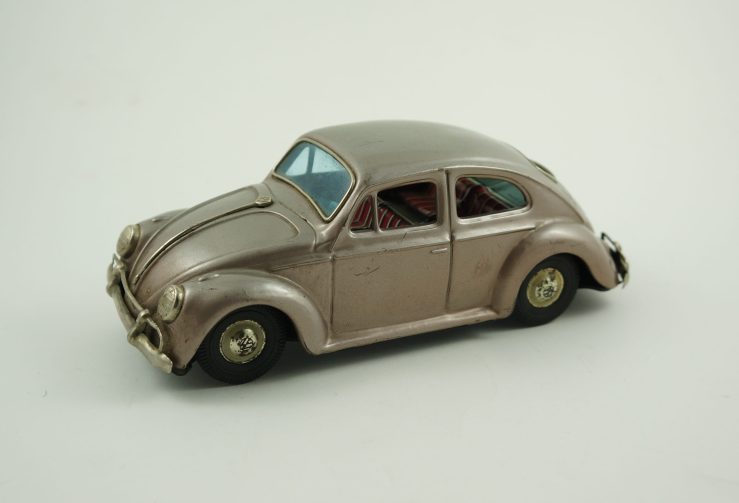 The eBay auction result for this VW beetle was also disappointing, perhaps for the same reason as the transistor radio. It didn’t help though that I misspelt “Volkswagen” and forgot to add the VW keyword. Oh well! I guess another good thing about Buy It Now listings is that they give you more time to fix your mistakes – eBay doesn’t let you change much once an auction starts, and they don’t like you cancelling auctions that have bids on them.

This Tri-Ang electric Jaguar seems to be worth around 30$, though I’ll probably use it to sweeten to future toy car lot at the local auction house.

This awesome poker chip caddy was made from solid Bakelite, which was the first plastic made from synthetic compounds. It was very popular from the 1920s to early 1940s, and is now pretty collectible due to its solid nature and excellent color. This piece sold pretty quickly on eBay for 120$ + shipping. 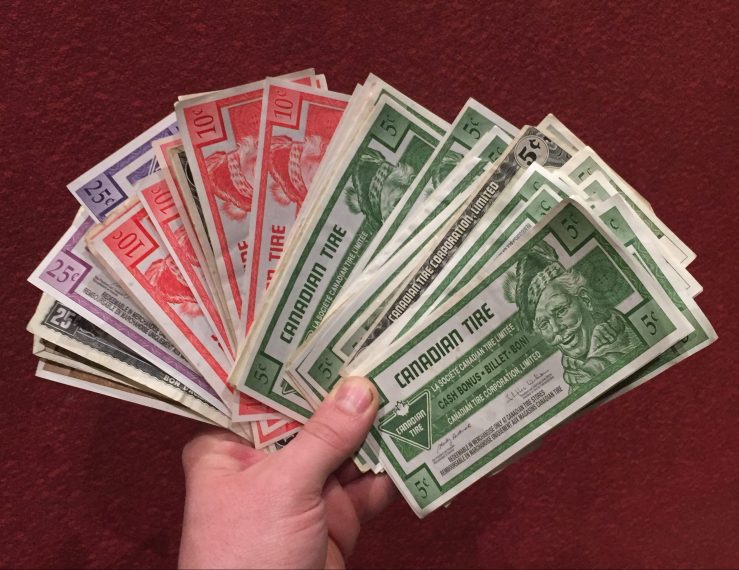 I also saved a stash of Canadian Tire money, which looks more impressive than it is (I’d guess there’s about 3$ in there) … 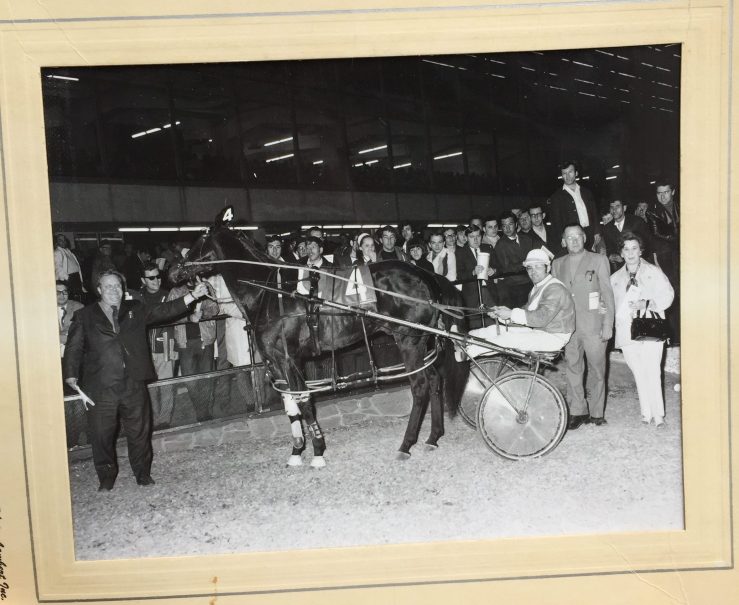 … a collection of 8×10″ racetrack photos (there were four in total, and they’ll soon be listed at the auction house);

… a receipt from 1920 (one can only wonder why the previous owner thought this was worth framing!); 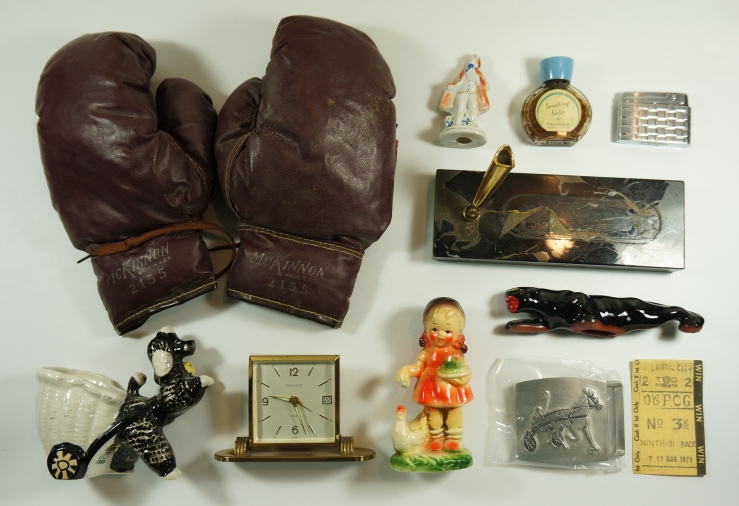 … and some miscellaneous junk. The clock goes with the marble pen holder, it just needs to be glued back on. I’ve never found smelling salts before, and wouldn’t have expected them to have been made by a traditional perfumer like Yardley.

This spot was most notable for providing neat old junk boxes, most of which once held cigars.

One held some less interesting papers, as well as several pennies and a well worn 18k gold ring.

Another held old business cards, some old stamps, and a silver dime. I’ve found a lot of vintage business cards recently, many of which were made for establishments that once did business not far from my home. I’m thinking it might be fun to walk around and match the business with the building, taking a picture of both and sharing them on Instagram. Could be a good excuse to get out of the house at least! What do you think? 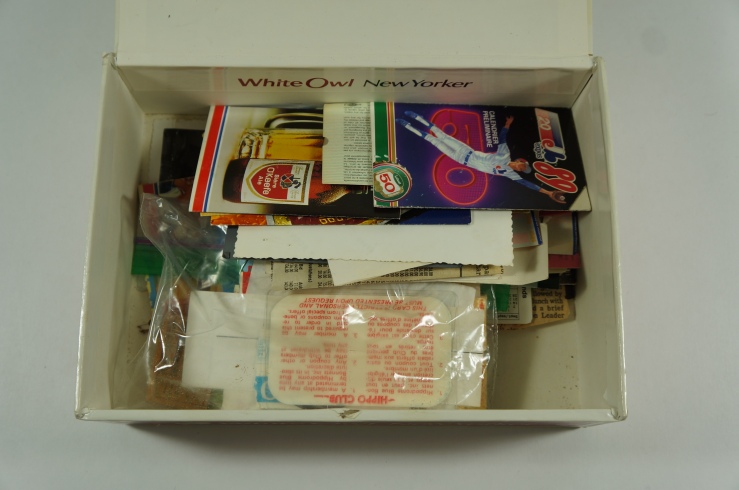 This box held the most valuable item of the bunch.

Inside was a collection of interesting paper ephemera, including this dollar bill and a bunch of old bus tickets.

There were a few old photos inside, most of which featured this dog.

Most of the papers were sports-related, however. Here’s some old horse-racing tickets & schedules …

… a bunch of tickets stubs, mostly from minor hockey and Expos games; 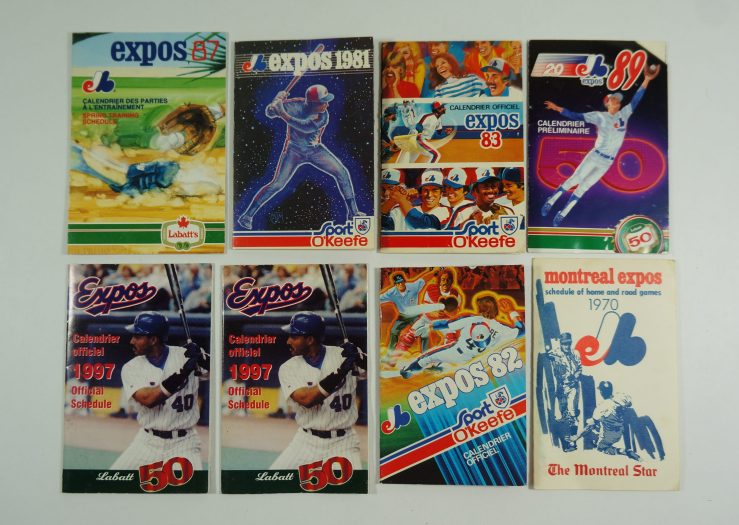 … and a collection of Expos schedules. Most of these weren’t worth much, with the exception being the 1970 Expos schedule at bottom right. It was made for the 1970 season, the 2nd of the Expos, and appears to be fairly uncommon. I listed it at 95$ and it sold very quickly – perhaps I could have gotten more for it, but oh well.

This spot didn’t produce for very long, but my finds here still netted me at least 500$. Not bad! However, in my next post I’ll share some junk from an even more profitable pile.

1. Facebook page
2. My eBay listings, Sign up for eBay, Search for something you want / research something you have (I’m a member of the eBay Partner Network so I make a bit of money if you buy things [even if they’re not mine] or sign up for an account via these links)
3. Help me pay off student loan debt / Contribute to the blog
4. Follow me on Instagram