The weather was horrible last week, pretty chilly with lots of rain. It made me pretty lazy, but thankfully one of my best finds came about largely because I slept in. I did a late run and travelled down some roads I might not have explored otherwise, stopping at a duplex in Côte-des-Neiges with a sizeable amount of trash out front. I looked in this bin and discovered that the reusable shopping bag was full of figurines.

There was another bag full and several loose pieces awaiting their fate at the bottom of the bin. Luckily most had been wrapped in newspaper and survived their trip largely undamaged, though a few did break along the way. Who knows why they were thrown out, but I’d guess that they were inherited by someone who didn’t share the same passion for the collectibles.

The collection was definitely one of my biggest ever figurine hauls. However, it was most noteworthy for featuring one specific animal, that being the wise owl. There were 134 in total based on a count by my roommate. Most of the figurines are actually pretty nice so I thought it’d be fun to share them all here – only a couple of damaged styrofoam Dollarama owls didn’t make the photoshoot. Also, it’s a pretty diverse collection and I’m not familiar with all the different designs, so please let me know if you possess any information we might find interesting!

Anyways, let’s get to the owls!

Here’s the brass owls. Some are hollow and others are solid. Two were made in India, the one with the tuxedo was made in Korea, and the rest are unmarked. The one at front left is a Greek Owl of Athena. 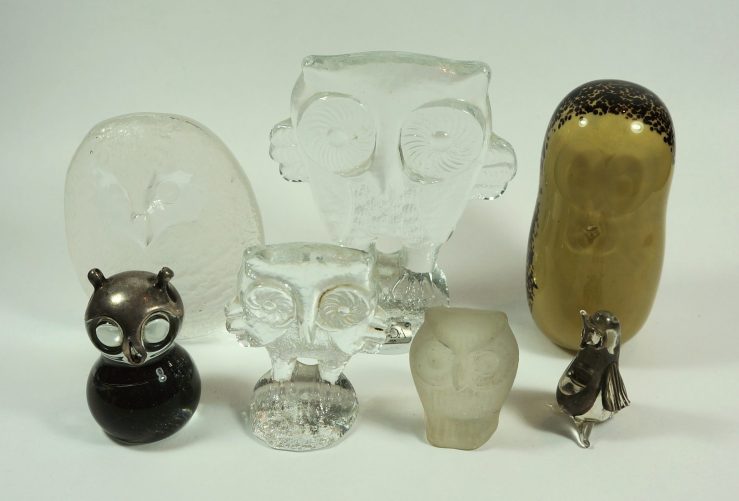 Glass owls. The one in the back right is a Wedgwood piece worth between 10-20$. The dark ones in the front seem to be painted with a thin layer of silver. Unfortunately those are unmarked. The one at back left is signed by Mats Johansson of Sweden and seems to be worth about 20$. The one at back middle features a “Handmade Boda Sweden” sticker, and I’m pretty sure the one in front of it is a smaller version of the same design. Those might be worth decent money as a lot, Kosta Boda stuff does fairly well on eBay. 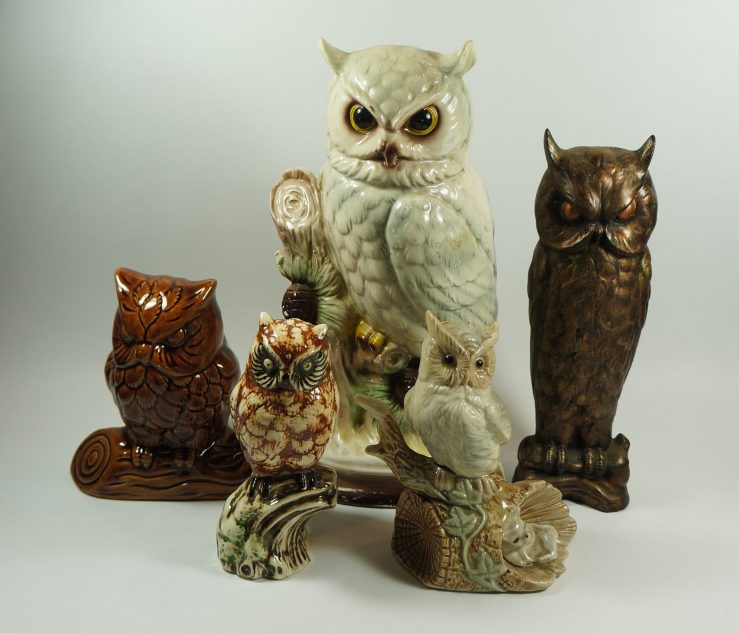 Here’s some ceramic owls. The one in the middle back is the tallest of the bunch at about 11″. It might also be the oldest, though it’s hard to say for sure. The one on the back right is easily the scariest of the collection. These are all unmarked or signed with first names. 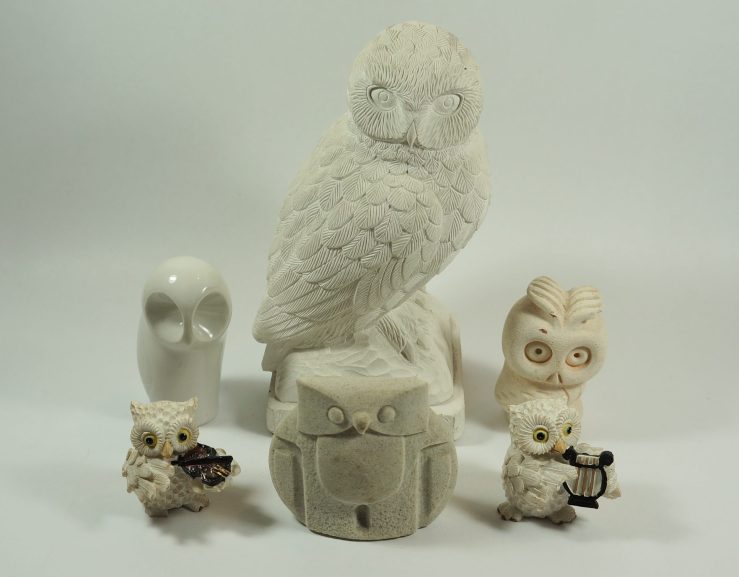 White (ish) owls. The tallest one at middle back is about 7.5″. I’m not sure what it’s made from – it looks like plaster but is much heavier and denser than the chalkware pieces I’ve seen. At the front of the base is written ‘”Congrès Suprême” Montreal 1997.’ It’s signed on the back by Noel Guay, a sculptor in the Bas-Saint-Laurent region of Quebec. Back left is a Royal Dux piece, back right is marked as being made in Greece, and front middle is by Marbell Stone Art of Belgium. The other two are fairly contemporary resin pieces. 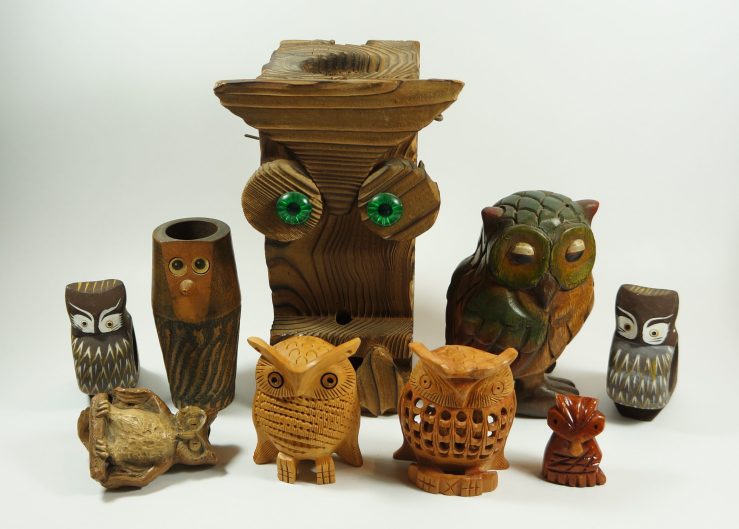 Wood owls. I think the ones at back left & right are silverware holders give that they have big holes in the middle. Back and second from the left is an older Asian import with blinking eyes. The two at middle front are among my favourites – the one on the right has a baby owl inside as well! Both of those are about 3.25″ tall. There’s a big hole (from top to bottom) in the owl at the front left, I’m not sure what it’s supposed to do. The big one at back middle is probably a Quebec folk art piece. It has a little indentation on the top (maybe for a candle?) and a pencil-sized hole closer to the base. 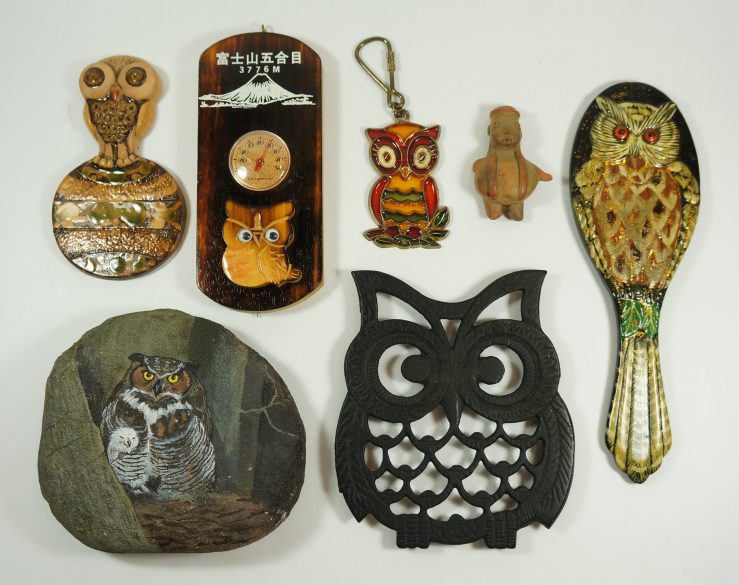 Flat owls. There are a few non-owls in the collection, at you see at top right. On the far right is an owl mirror. Next to it is a Taiwanese cast iron trivet (my grandpa collected trivets, so that might have been his favourite). The ceramic piece at top left is signed but very illegibly. Next to it is a neat old Japanese thermometer, which was probably a tourist piece from back in the day. At bottom left is a painted rock signed “K Dowker 99.”

A few larger owls. None are signed, but the middle one (the tallest at 8.5″) has the remnants of a made in China or Taiwan sticker on the back. The one on the left looks to be decorated with a lacquered cloth (the white spot is a reflection, not a defect!). The one on the right is kind of funny. The owl is wood and comes with a background of wild grasses. It was then encased in a thick 2.5″ slab of lucite (or another clear plastic) in the shape of a cookie with one bite out of it.

Mostly metal owls. The enamel ones aren’t fancy but are nice decorations. The tall flat one is from Torino in Italy. On the right is a Canadian pewter piece that got a little damaged somehow.

Owls of Central (and maybe South) America. Four are from Mexico (Puerto Vallerta at front left; an Onyx piece from Tecali, Peubla second from left in the back; a piece signed El Palomar second from the front right; and an owl signed JC Mexico at back right). At front right is a small piece made from mother of pearl that’s probably Mexican as well. I’m not sure about the other three. The one on the far back left has a little rattle inside.

Miscellaneous owls. The one on the far right has a big crack in it but managed to survive. It has a kind of sandy surface texture. In front of it is a tiny stone owl of unknown origins. The one with the cactus is fairly modern but pretty well done. 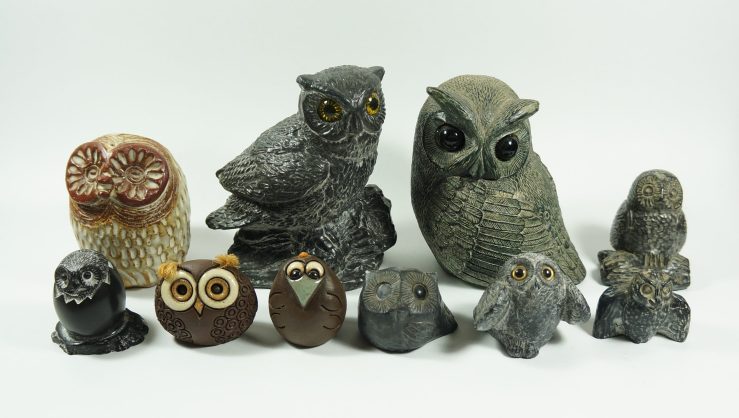 Canadian owls, or ones that look like they might be Canadian. Several of these are done by a fellow named Al Wolf. They’re nice but don’t seem to sell for a lot on eBay. The brown ones in front are signed with something that looks like “SUA”, though that doesn’t bring up anything when I search for it on Google. The baby owl at front left is signed what looks to be “VA” (with a copyright symbol) while the one second from the front right looks to be signed “WA” with the symbol of a waning crescent moon (or maybe it’s just another copyright). At back left is a small planter signed Elsia (?) Canada. 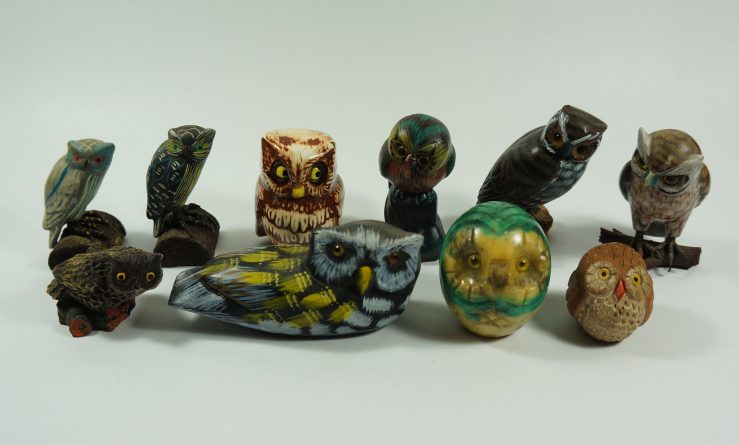 Smaller owls. My favourite of the bunch is the nearly round ceramic piece at front right. The one next to it is made from some kind of stone. The long owl is ceramic and smells like crayons (must be hand-painted).

The educated owls. These guys are all reading books or otherwise looking very smart. The teapot at back left is from Hong Kong – a note on the bottom says it is only for decoration and should not be actually be used. My roommate took a liking to the small owls who appear to be reading some highly scientific materials! Those ones are pretty well done but are unfortunately unmarked.

Non-owls. Most of the items were owls, but a few were not – including the two large pieces of iron pyrite in the middle. 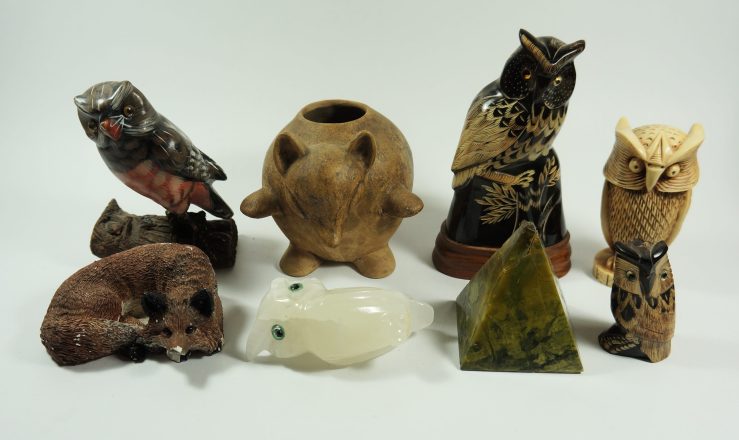 There’s a few more non-owls in this bunch. The piece at far back left looks a bit like bone or tusk but is probably made from resin. The pieces second from back right and front right are interesting, I have no idea what they’re made from. The lighter parts are carved and feel like little ridges. They’re lightweight and yet seem to be very durable. Let me know if you have any ideas!

Some of these owls are made with natural materials, including fur, feathers, and plants. There’s a pretty crude stone owl in there as well!

Sick of owls yet? Don’t worry, we’re almost done! That poor owl on the far left is pretty bunged up, I’ll put it in one of my free boxes. 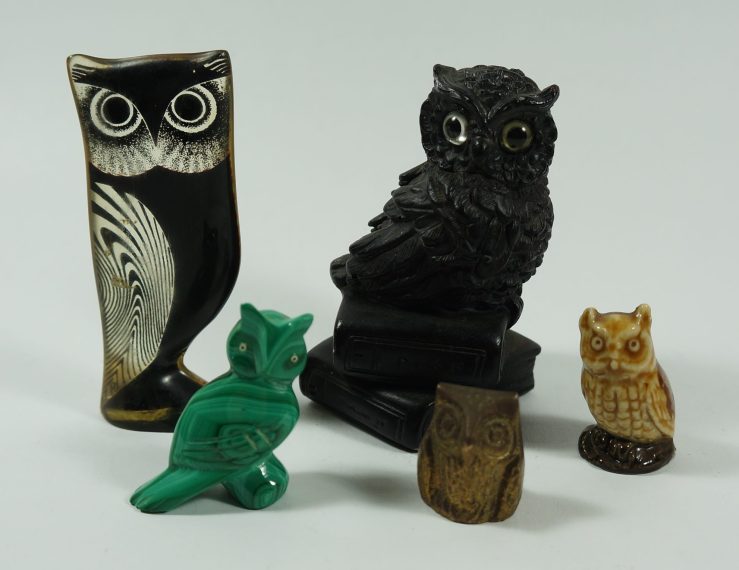 The little green owl is one of my favourites. It’s made of stone, if you know what kind please let me know! At right is a classic Wade Red Rose tea figurine, and next to it is a little brass guy in need of a polishing. The black one is marked “Christmas 89” on the bottom – I’m not sure if this was done after it was bought, or whether the owl itself was made as a gift.

While researching another owl I accidentally happened upon some information about the lucite piece at back left. It was made in Brazil and was designed by the artist Abraham Palatnik. His work seems to do pretty well on eBay – a similar but much larger owl sold for 150$, while one about 2″ taller (mine is 3.25″) sold for 63$. It’s not a stretch to think that I could sell this one for 40$, or maybe even a bit more.

That’s it for owls, though I’ll keep an eye on this spot to see if anything else pops up! I plan on selling most of them. The more valuable / easy to ship owls will go on eBay, some similar lots might go to auction, and the rest will go to the yard sale bin. I’ll probably keep a couple and give a few as gifts.

Otherwise I’ve been busy dealing with my old junk and getting ready for winter. I purged questionable yard sale items from all my various storages, brought all my clothes to places that buy or give store credit for them, and delivered many loads of stuff to the auction house. I thought I was nearly done with my restructuring efforts but it seems that the deeper I dig the more I find! I must be getting close to the end now though…

58 thoughts on “The owl collector”