Longtime readers know that the smallest treasures often make their way to the bottom of the trash bag. One of my best finds recently was in St Michel where someone decided to dump a jewelry box (and seemingly all its contents) into the trash along with the pizza crusts. I threw the bag in the car for later sorting because I wanted to make sure I didn’t miss anything.

(Sidenote: I happened to be followed by a photographer that day. He was taking pictures for an upcoming interview in a local magazine, and I’m glad I actually found something of value in the short time we had available! Usually I end up having to feign interest in a junky pile just to get a good shot. I’ll share the interview here when it’s out). 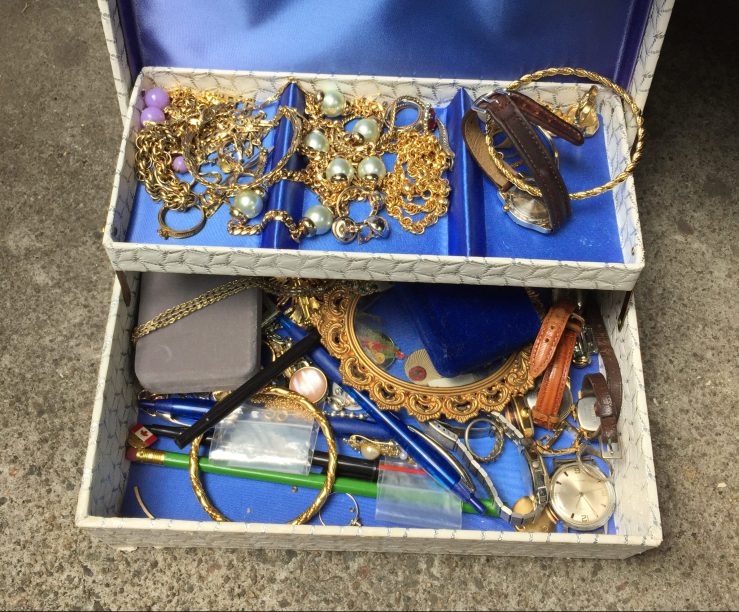 By scrounging amongst the crusts I was able to refill the jewelry box. Some pieces were indeed worthy of the trash, but most were not and some will end up being fairly valuable.

These tie pins were likely a service award given out by the Steinberg’s supermarket chain that operated from 1917 to 1992. One is silver and the one with the ruby is 10k gold. I brought these to the auction house – Steinberg’s was a Montreal institution for many years, so the name invokes a lot of nostalgia (and hopefully many bids). 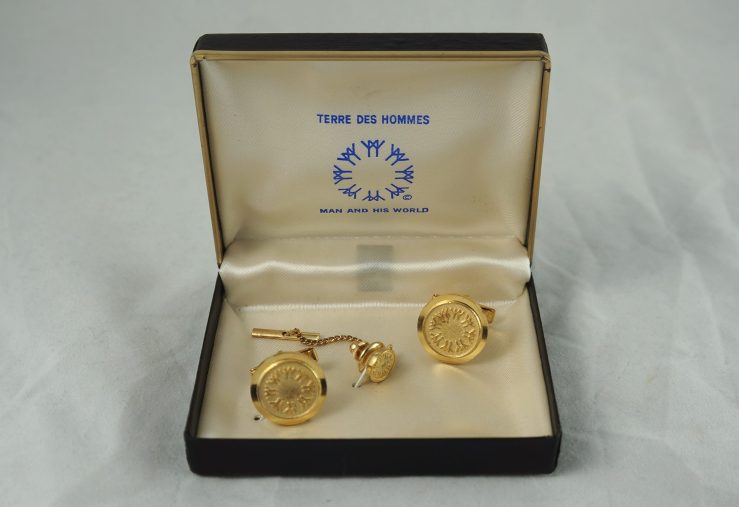 Speaking of nostalgia, I also found these cool “Man and his World” Expo 67 cufflinks. They’re in pretty good condition, and I expect them to sell for around 50-60$.

Here’s the best of the costume stuff. I really like that leaf brooch but unfortunately it’s unsigned. I’m mildly hopeful that the bracelet on the right is unsigned gold but that’s probably wishful thinking. 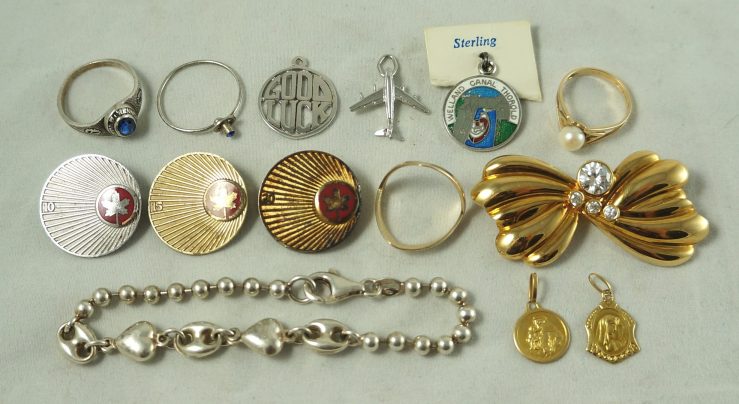 Finally, here’s the stuff that’s marked as silver or gold. There’s three Air Canada service pins on the left, all of which are sterling silver (the latter two might be gold plated as well). The religious medallions on the bottom right are 18k gold, as is the bowtie brooch above it. Overall this was an awesome haul, and I expect that it’ll earn me four figures once it’s all processed!

I haven’t seen much here (besides a box of nice German crystal since). I’ll try to keep an eye on the situation, but I’m also planning on retiring the St Michel route for a while – it hasn’t been productive for a few weeks now.

I saved these items from the bottom of a bag in Hampstead. There’s a mini bottle of Christian Dior’s Eau Sauvage, a few coins, two pocket knives, a pipe reamer, a couple pins and a single bracelet link that I hope is gold. That Heil piece is actually a measuring tape made by the Zippo company, I’ve never seen such a thing previously.

I actually went to an estate sale at this place a couple weeks later. They might have made a few extra bucks if they put this stuff in a box and said “make an offer,” but I guess throwing things away helps to make the process a little less stressful. Or, maybe they legitimately thought that these items had no value. Who knows.

A bag in TMR contained: around 25 coins, a few of which date back to the early 1900s; a WWII food ration token; a couple of vintage bracelets (I particularly like the orange one – the beads don’t seem to be bakelite but are probably a different type of old plastic); a single gold earrings; two chains I hope are gold; 10 Hong Kong dollars from 1985; and a few other doodads.

Finally, I took a look at this trash while walking around my neighbourhood the other day. I kicked a bag and heard the familiar sound of coins. 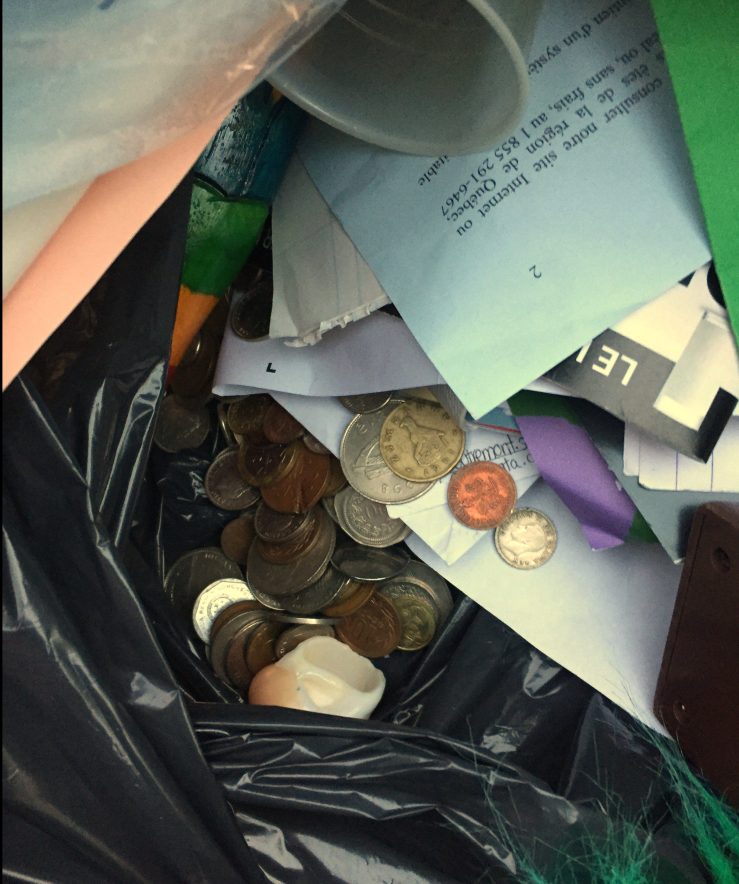 There was indeed a sizeable collection of mostly foreign coins at the bottom of the bag. I gathered them all into that empty plastic cup at the top of the photo and brought them home for sorting.

Here’s a video of me dumping the haul into the light box. The coins aren’t worth much individually, but once I amass a big collection I can sell them at the auction house. 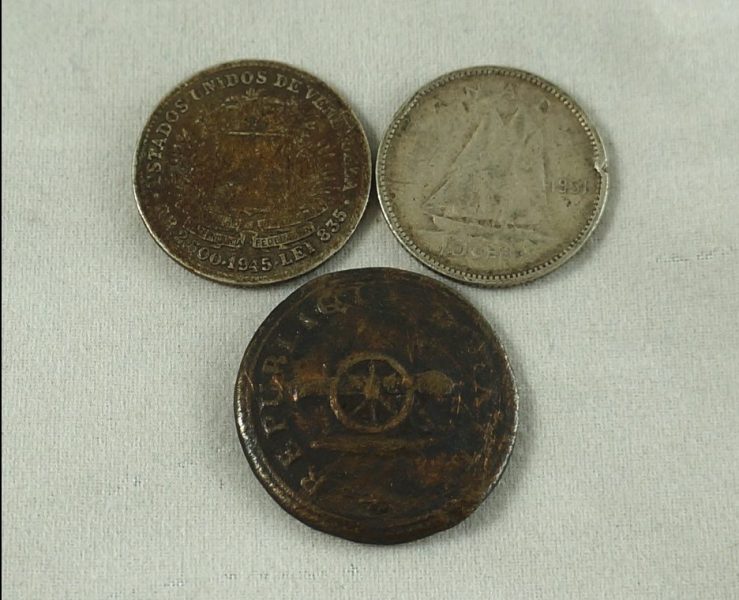 From all that I spotted three pieces of note: a 1945 Venezuelan 1/2 Bolivar (silver), a 1951 Canadian dime (also silver), and an old looking (brass?) button marked “Republique d’Haiti” featuring an image of a cannon. I couldn’t find any other buttons like it below, so if you happen to know something about it please share in the comments!

In other news I’ve been quite busy basically re-organizing my whole business with the auction house in mind. I’ve cleared all the random junk I’d never have time to deal with from the basement, sorted through and organized the junk in my garage and storage, purged my stash of clothes and brought a bunch to a local consignment shop, and all the the while found more garbage that I have to deal with! At some point the work should slow down and I’ll have more time to blog. This summer has been great for picking and I’ll try to share more of those finds here soon.

If the weather is good I plan on doing a yard sale this Saturday at my storage (4096 Coloniale near Duluth). I want to clear out a bunch of stuff and maybe you (and the university kids who are now returning for the fall semester) can help! I’ll start around 11am, and if it doesn’t work out for whatever reason I’ll edit this post to reflect that. Perhaps check back Friday evening just to be sure – if I have to cancel I’ll add a notice in bold below.

15 thoughts on “Pickin’ from the bottom of the bag”