I didn’t plan on trying particularly hard this moving day and the sweltering heat did nothing to increase my motivation. I think it was 35 before the humidity which is way too hot in my books! Thankfully my car has air conditioning so I toured around town with the cold on full blast. I tried to think of relatively wealthy parts of town with: 1) a high number of renters and 2) less competition as compared to somewhere like the Plateau. My brain came up with the apartment buildings in TMR and Old Montreal.

Neither of those bets really paid off, though I did find a few things worth selling in TMR. I sold the brackets, towel racks, and journal at a yard sale, and a bag of change is a bag of change. I gave the canvas to a friend, and left the dishes in Park Ex where they were more likely to be picked through.

One spot in Old Montreal produced some decent stuff, including a whole bunch of jars, some of which were filled with dry goods. A friend who came for the ride got some free stuff, but I left most of the rest (including the food) on the curb for others to pick through. I’m sure it was still good to eat but I didn’t feel like dealing with it myself. Hopefully it found a good home! 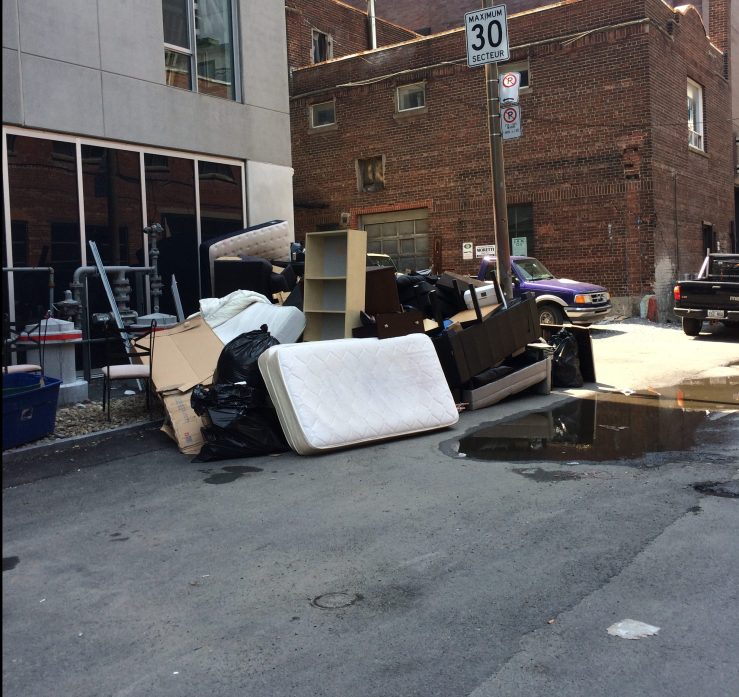 I also tried looking around Griffintown but only found huge piles of actual trash. This one in particular was a bit depressing, evidence (at least to me) that many products these days are disposable junk from the day they were made. 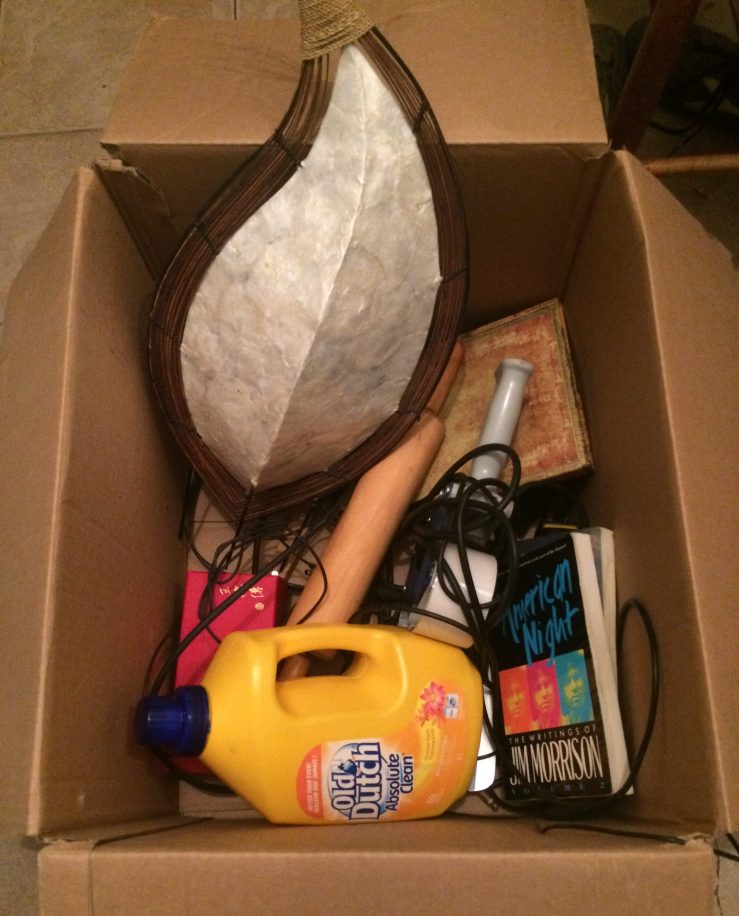 Ironically, after travelling around so much and finding little I happened upon my best finds no more than 30 seconds from home. One of my many neighbours tossed out an array of quality stuff, including a cool lamp (which I sold for 5$ at a recent yard sale), some laundry detergent, a wooden rolling pin, a few books, several miscellaneous cables, and some unopened tea.

The crown jewels were a Focusrite guitar doohickey and a Parker fountain pen that looked to have barely (if ever) been used. Without doing much research I’d guess that these two items will make me around 100$, a nice little haul that keeps the chains of profitability moving. 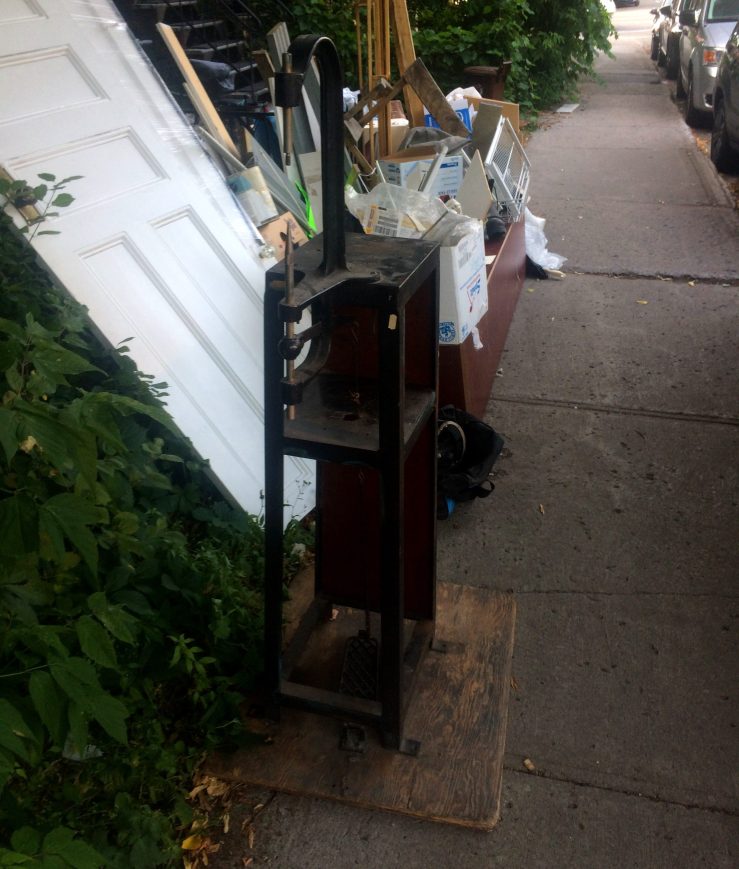 Another neighbour was bringing down some junk around the same time. He wasn’t moving, but was cleaning out a storage room that was full of random stuff from previous tenants. I had to have this industrial thing despite having no idea what it was made to do (neither did he, for that matter). I did know that the auction house would take it, however, and it sold last week for 20$. Not a huge sum, but definitely better than nothing. (Oh, and apparently it’s a riveting machine of some kind).

I also picked up a bike frame with parts and a pair of lightly used mining boots that I’m sure were very expensive new. 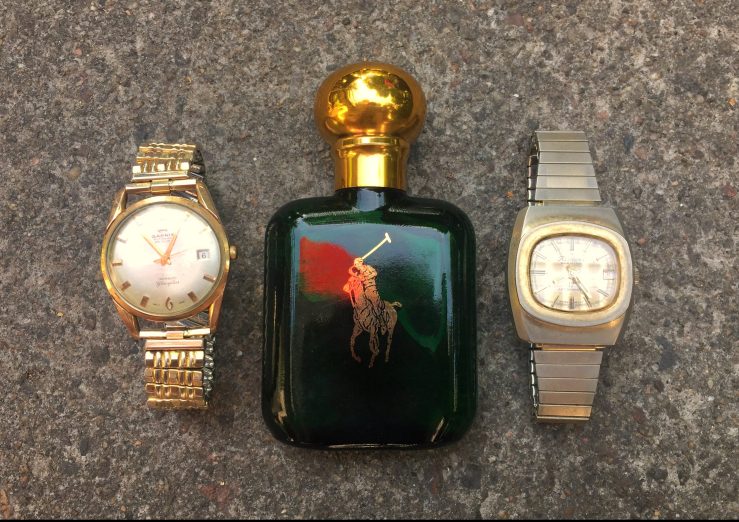 Later that evening I went for a little walk with my roommate. We happened upon a pile not far from home that contained a bit of cool vintage stuff, the best of which were these two mid-century watches and a nearly full bottle of Ralph Lauren aftershave. I doubt the watches are worth much but the vintage aftershave should sell for a good price – I’ve had good luck with vintage RL scents recently.

I’ve found more stuff at this spot in recent weeks so the purge wasn’t actually moving day related. Regardless, my overall moving day haul was decent in spite of the heat! Let’s hope the weather next year is a little more tolerable, I would have spent more time biking around otherwise.

In recent weeks I’ve happened upon some interesting and valuable hauls in many different parts of the city. I’ll be sure to share some of those stories & finds sometime soon!

Oh, and I figured I should clarify some things about the eBay links below. I mentioned that I get a bit of money when you sign up for an account or buy things after clicking to eBay through those links, but I’m not sure that I told you that I get credit for sales no matter who you buy from. So, if you’re looking to get a newer iPhone, a gift for a friend (that I don’t have), or whatever please consider going through my site before doing so! Currently I’m making around 15$ a month through this program, which isn’t a lot of money but I do appreciate it as an extra passive source of income.

1. Facebook page
2. My eBay listings, Sign up for eBay, Search for something you want / research something you have
3. Etsy store
4. Kijiji listings
5. Help me pay off student loan debt / Contribute to the blog
6. Follow me on Instagram