Today I’m sharing more finds from the house that tossed the heavy sterling silver dish in the fall. These guys exhibited some of the worst judgment I’ve ever seen in my career as a garbage picker – whether that was due to ignorance, total disinterest, or a combination of the two we’ll never know. Their treatment of precious metals was notably poor, but they also threw out other quality items like the art glass vase above.

The bottom was signed Orrefors (it took me a while to figure that out), the name of a respected glassworks company based in Sweden. It had no notable defects, and sold a while back for 80$. 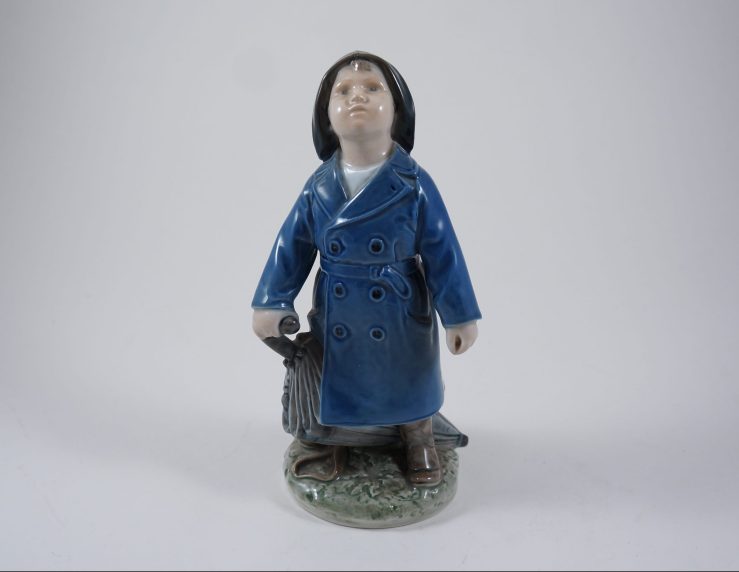 This “boy with umbrella” Royal Copenhagen figurine also showed no signs of damage. It’s about 18cm tall and should sell for around 70$. 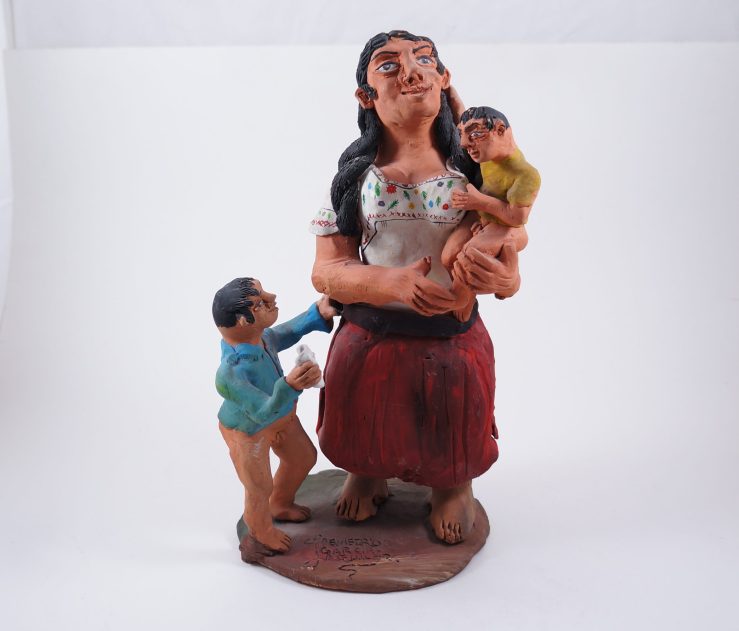 Some of these things were wrapped in fabric before being tossed. Or perhaps more likely, they were stored wrapped in fabric and then tossed. Either way, this clay sculpture survived its trip to the curb more or less unscathed. It’s signed by Demetrio Garcia Aguilar, a member of the Aguilar family of Oaxacan potters. It’ll probably sell for around 80$.

(For the record, I’m a bit like Alex Trebek – I may seem all knowing but I’m really just holding cue cards, or in my case doing a lot of research beforehand. For example, I knew nothing about the Aguilar potters before finding this sculpture!)

This unusual wood figure was made by J.M. Poirier, a fisherman and folk artist based in Nova Scotia / Îles de la Madeleine. I’m hoping to sell it for around 80$. 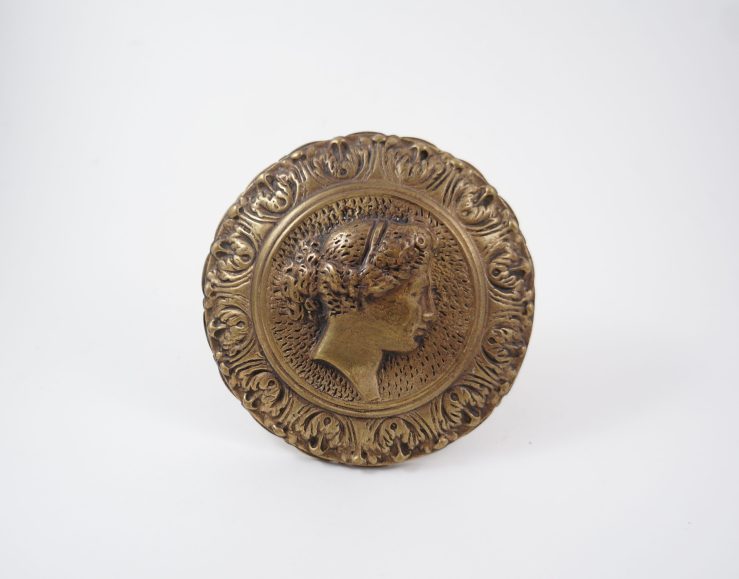 I think this old brass thing is a pull of some kind. It’s pretty big actually, measuring about 12cm in diameter. I’m not sure what to ask for this, so if you have any ideas please share them in the comments!

This set of lightweight midcentury etched glass mugs also made it to the curb in surprisingly good condition. They’re marked Schott Mainz Jena Glass on the bottom and would be great for coffee or tea. They’re worth about 10$ each, but I’ll give a customer at this vintage market a good deal when I sell my trash there near the end of the month (April 28-29, save the date!).

This little silver dish was made in Peru by Camuso. It should sell for around 30$.

The best silver piece however was this large sterling cigar humidor, which according to the inscription (which I’ve partly censored out) was given as a retirement gift to the President of a local congregation in 1944.

The box weighs about 1.2kg, probably 1.1kg of which is sterling silver. That puts the scrap value of the box at approximately 550$. 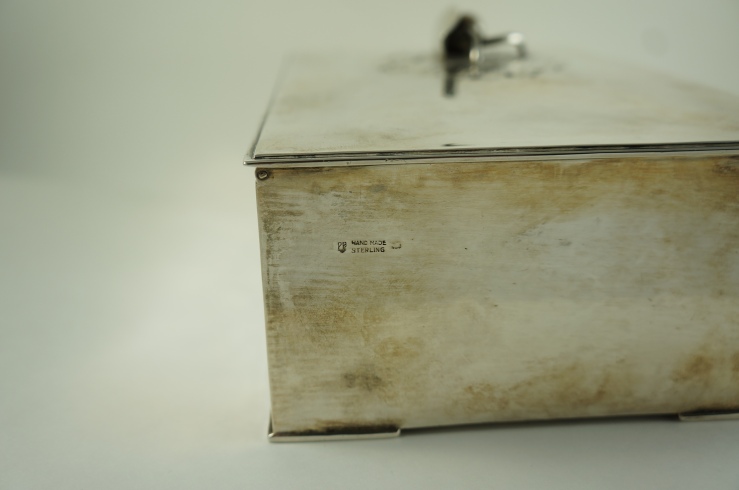 However, I’ll definitely be able to add a healthy markup to that. This box was made by Carl Poul Petersen, a Danish-Canadian silversmith who apprenticed under the legendary Georg Jensen. Inspired by this fruit bowl of his that recently sold on eBay for 4450$, I finally got around to listing mine recently for 4000$. I’m probably fishing a bit with that price, as the fruit bowl seems like a bit of an aberration (though his stuff does sell for good money) but hey, it’s better to start way too high than way too low. At the very least I expect this to be the first single item that I sell for four figures (those Expo 67 photos from a couple years back sold for 1200$, but that was a group of items; also, the George Nakashima chair sold for over a grand, but after shipping I made only 900$).

This is why I called this series “Questionable judgment.” I find sterling, mostly in the form of mediocre jewelry on a regular basis but it’s pretty unusual to find bigger pieces. This place offered me two of them, with a combined scrap value of about 1000$ and the potential for a fair bit more. I can understand throwing out silver plated stuff, which has little intrinsic value, but you’ve got to wonder what was going through this person’s head when they were bringing these things to the curb.

Part three will feature more quality junk and more precious metals, but that’ll be a little while yet. My “best of 2017” post is almost done so be on the watch for that. Otherwise, I’m swimming in great finds right now and thus have lots to talk about. These days I’m feeling like there’s not enough time in the world to deal with all the stuff I’m salvaging, and I’m trying hard to avoid getting burnt out over it.