I’ve lived in the Mile End neighbourhood for most of my years in Montreal. Historically the area was very working class, but it started becoming “trendy” in the 80s and now, in 2018 we’re approaching peak gentrification. The best example of that might be the Lululemon that just opened on St Viateur.

I don’t want to get into the gentrification debate here. There’s obviously some bad things that come as a result, but I also wonder where the “yuppies” are supposed to move if not to houses that are for sale, in areas where they want to live. Regardless, I do know that gentrification improves the quality of the garbage in the neighbourhood. This pile of trash, for example was created by young people with disposable income, and I’m grateful for their contribution to my coffers!

This bag in particular was excellent. At the top you can see perhaps the most valuable piece, an early 2010 MacBook Pro in a protective sleeve. 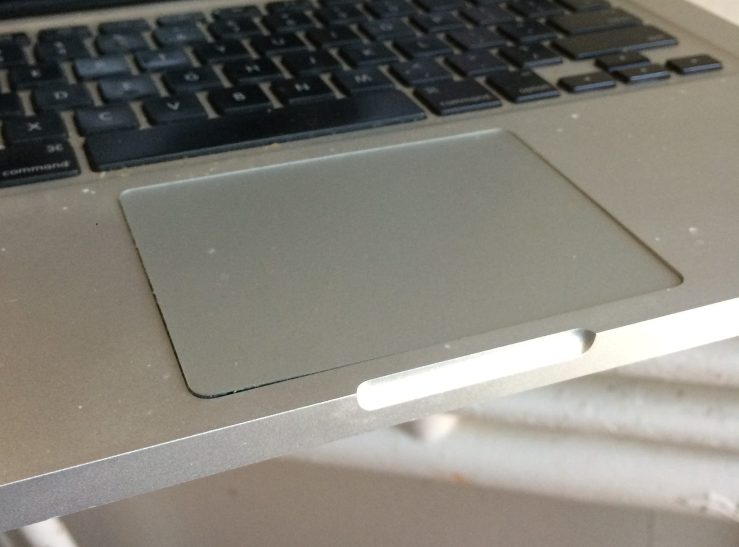 The most obvious issue was the battery, which was bulging more than any I’ve seen previously. You can see how the left side of the trackpad is raised up, making it impossible to use the clicker. It’s a pretty common but (usually) easily fixable issue. Unfortunately, I stripped one of the screws while removing the battery and ended up basically ripping it out. I was nervous doing this – serious fires can occur if those lithium batteries are punctured – but after watching this video I felt more confident (he really bends those things!).  In the end it all worked out, it just took longer than it should have.

The laptop itself seems to work fine. Thankfully it’s pretty easy to delete people’s accounts and info through the recovery mode, and the laptop is now clean and ready to sell. The screen is cracked on the left side (though not in a way that’s particularly noticeable) and the battery is missing, but this MBP should still sell for around 200$. Not bad! I’m always excited to see a Macbook Pro – they’re a near lock to be worth three figures, even when busted.

That wasn’t all I found though. Here’s a look at the bottom of the bag – that’s where a lot of the smaller valuables often end up.

You probably noticed the coins in the last picture. There were two little ziplock bags full, plus some loose change at the bottom of the bag. There were also two American dollar bills (I feel like I’ve found a bunch of these lately). Overall, I’d guess the bags contain between 15-20$.

I found 12 lighters – all of them worked. That’s a ridiculous number, so I’m guessing this person was the type to steal lighters at parties. I don’t smoke, but I gave them to friends who do.

I also saved some jewelry. Most was either decent costume stuff or crap that wasn’t worth saving, but a few pieces were quite nice.

The necklace on top seems to be made from real pearls. I don’t think it’s worth much, but it’s nice regardless. The second bracelet is sterling silver, while the necklace on the right is made by Monet, a quality costume jewelry designer.

The best pieces are on the left. The silver bracelet is by Pandora, a well-known Danish manufacturer. I’ve found fakes before but I’m confident that this one is legit. The silver charms (most of which sell for 90$ each) include “mom”, “dad”, a series of hearts, and a graduation cap. Based on that, I’d guess that this was an underappreciated graduation gift. Buying something like this new would cost around 500$, so I’m hoping that someone will bite at my listed price of 220$.

The earrings beside them are Tiffany, and I’m confident they’re legit because the production quality matches the name. It’s an Elsa Peretti design, and they should sell for between 80-100$.

When all is said and done this trash should make me over 500$. Not bad!

(Not pictured: a Starbucks gift card that had 6$ on it, and some decent headphones that I gave to my sister).

The Mile End is definitely getting gentrified, but there’s still a lot of folks here who’ve been around since the old days. Their trash is usually more interesting than the younger peeps, in part because their stuff is vintage but also because that generation was generally more crafty – they needed to be. As such, their garbage produces more old tools, more handcrafted items, and more folk art (which is one of my favourite things to find). Most working class people of that generation didn’t throw much out either, so the trash (when it does come) sometimes features fun kitschy knick-knacks, cool paper ephemera, and other things you don’t see anywhere else.

Looking for this stuff is like trying to find a needle in a haystack, but occasionally I get lucky. This spot, which I happened upon during my first bike run of the year, produced a few fun finds. 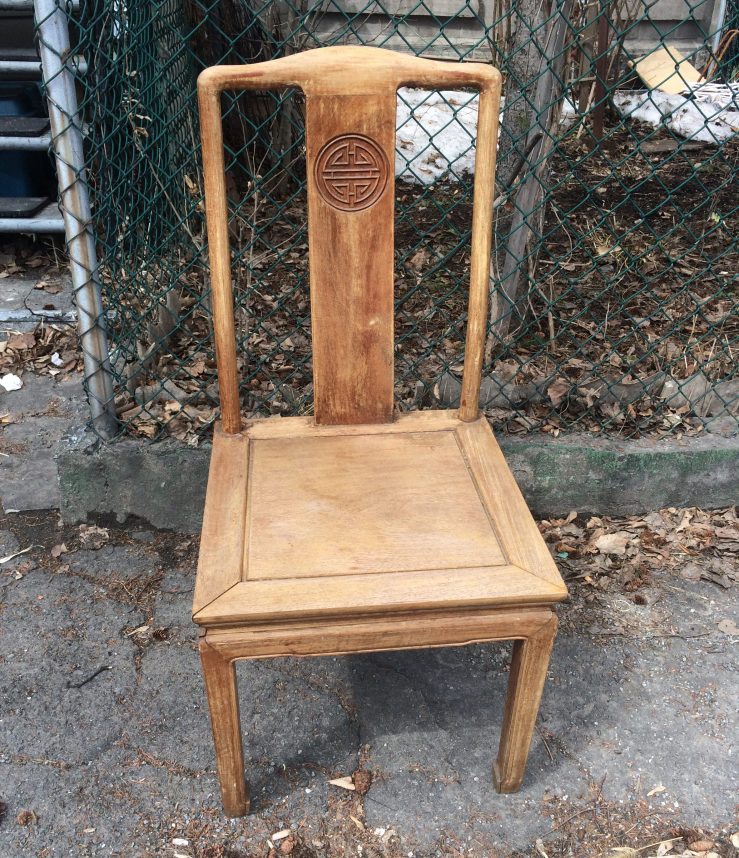 You probably noticed that neat chair in the previous photo – it’s the first thing I noticed as well. I’ve never seen anything quite like it before, and because of that I knew I needed to save it. The chair is solidly built, and has a handmade feel to it.

This symbol in particular made the chair pop out. According to one of my Instagram followers it’s a stylized Chinese symbol of fortune, and based on a quick Google search I think she’s right. Has anyone else seen a chair like this? I had no luck during my brief Google search.

Behind the chair was this framed print titled “Recontre de Jacob et de Joseph.” It was made by Thomas Nelson & Sons, a publisher that put out a lot of religious materials back in the day. I didn’t find any reference to the existence of this poster on Google, however. It’s quite large, measuring roughly 3′ x 2′, and should sell at a yard sale. If I were to guess I’d say it dates to the 30s or 40s.

I found a couple nice things inside the bags, including these cute framed puppies (likely from the 70s).

In the interest in transparency – I also found some poop in those bags. I’m usually good at avoiding the gross stuff, but this time I got some on my hand. Gross. Oh well, it’s nothing that wouldn’t clean off. Fortunately this pile wasn’t far from my house, so it wasn’t long before I could wash my hands. 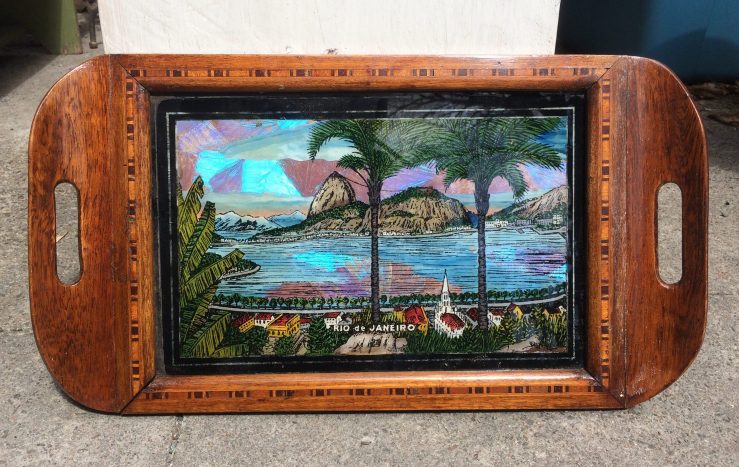 One great thing about having trash picked for so long is that I’ve pretty much seen all the junk there is to see. So, when I see something I haven’t seen before, that often means that it’s a thing with some amount of value. This Rio de Janeiro wooden tray is a good example of that. I’ve seen a lot of crappy tourist stuff in my time, but this tray was very beautiful and looked relatively old.

I did some research – only then did I realized that a lot of the iridescence in the image comes from butterfly wings. Zoom in for a closer look! It’s a neat piece, and it seems that these sorts of trays sell for around 60$ on eBay, give or take. It probably dates back to the 40s or 50s.

The rest of the stuff in those bags was worn out crap that nobody would want, but I’ll check back in the coming weeks to see if anything else gets cleared out.

Elsewhere in the Mile End I found a vintage nativity set, probably from the 50s or 60s. Just another blast into the Mile End’s past – the young people moving in aren’t generally bringing nativity scenes. I shouldn’t have any trouble selling this at a yard sale.

Now that it’s getting warmer out I’ll probably cover this route more often. I usually do it by bike, so it’s a good way to get some exercise. Also, I do get sick of driving sometimes!

I still have to document my finds from last week, which I’ll get a friend to help me with in the coming days. Otherwise, I’m expecting the early part of this week to be busy again, though you never know with garbage. I’ll let you know how it goes!

37 thoughts on “Garbage of the Mile End”