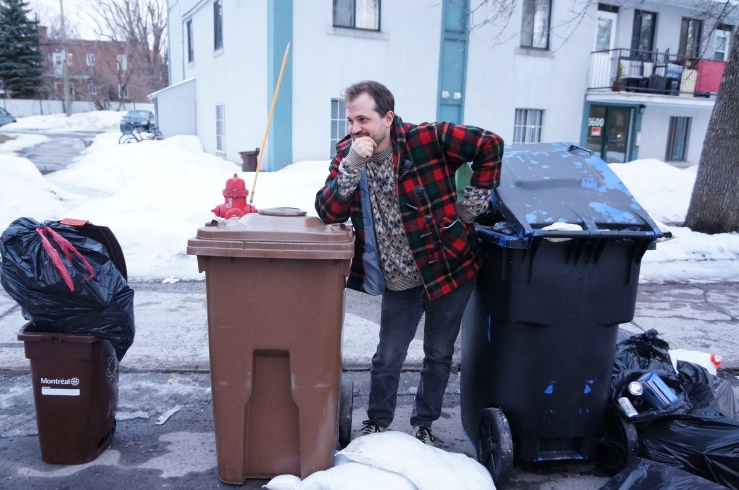 I recently did an interview with the folks at Weird Work. I usually hate the sound of my own voice but I was pretty happy with how it turned out! I had a good time talking with interviewer Sam Balter, and I think the episode does a great job detailing my work in a succinct and light-hearted way. Listen to it here, or find it on iTunes, Apple Podcasts, or Spotify. It’s about 23 minutes long.

I hired a friend the other day using some of the money donated by you readers (thank you again!). She helped me take some of the photos for this post (including the glamour shot above) as well as the photos of the vintage dresses from another recent post. I’ll probably hire her again next week as my garage has officially become a complete disaster zone – there’s lots of pictures to be taken, and lots of stuff that needs to be organized.

I haven’t found anything at this spot over the past few weeks, but I’m optimistic that maybe it’ll produce more quality junk sometime soon. I can see some black garbage bags sitting just inside the front window, so someone just needs to bring them out to the curb.

Vintage lovers should love this post – it features all kinds of awesome old junk. Those cat salt and pepper shakers are made of the same type of thin plastic as the Aunt Jemima shaker from a few posts back. That plastic is pretty fragile, so the cats were lucky to survive their trip to the black garbage bag. The angry pickle shaker is destined for a friend of mine who matches it perfectly. 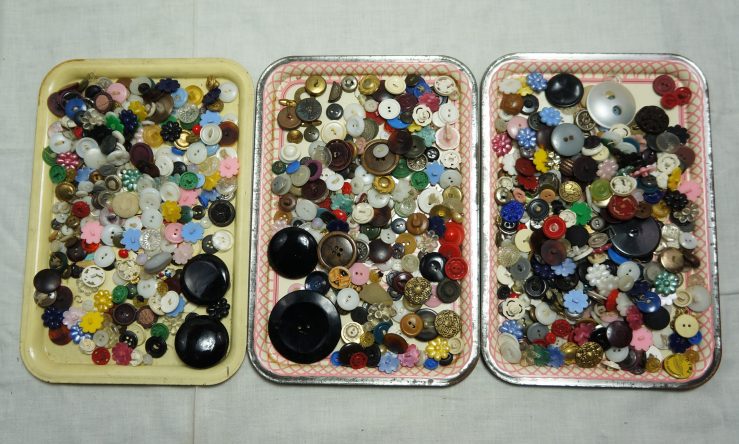 I always enjoy finding button collections. Here’s the contents of that bag in the first picture spread across three of those tin toy platters. Zoom in to see if there’s any you like! You’ll have to come to my yard sale to buy any though. 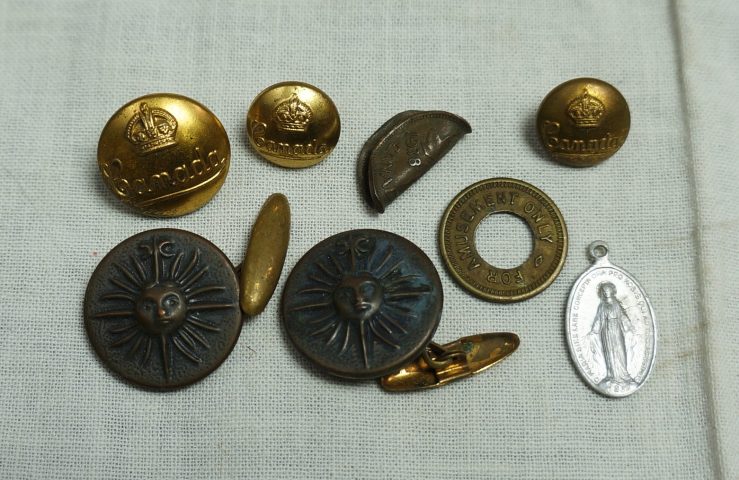 As usual there was a bit of miscellanea mixed in with the buttons. Here we have a cool pair of cufflinks, an amusement token of some kind, a squished 1938 penny, three WWII era buttons, and a Catholic charm.

I found some nice Fire King stuff including that sugar dish above (I also have the lid). Below you’ll see a couple of the matching cups. Those goggles at the bottom right are unusual, have you seen anything like them before?

A friend made a candle inside that Truro Nova Scotia cup, which was made in 1960 to celebrate the city’s bicentennial. Those old Corneli pizza mugs are great restaurant ware – on the bottom of each is marked “Maddock Ultra Vitrified, Made in England.” Corneli’s opened in 1960, so perhaps these mugs are from the early days of the restaurant. The restaurant is still around today – impressive longevity considering the industry.

There’s another old transistor radio battery on the right. It’ll end up on eBay at some point, after I accumulate a larger collection. At top left is a liquor permit issued in Amherst Nova Scotia in 1950. 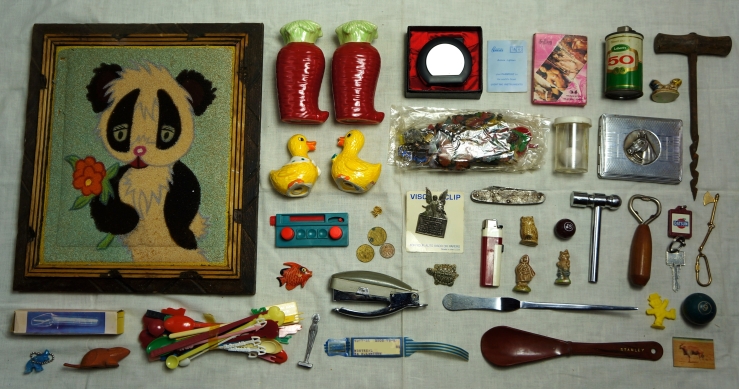 Here we have a cute framed panda (which seems to be painted on foam), a collection of swizzle sticks, a deck of nudie cards, a Labatt 50 table lighter, more Red Rose figurines, and lots of other stuff. Zoom in for a closer look!

Lots of salt and peppers shakers here! There’s also a couple Queen Elizabeth trading cards, an Avon perfume bottle made to look like a Coleman lamp, a skeleton key, a pin from the Cuban Pavillion of Expo 67, a rosary, and a 1955 magazine titled “Annales de Notre-Dame de L’Assomption.” 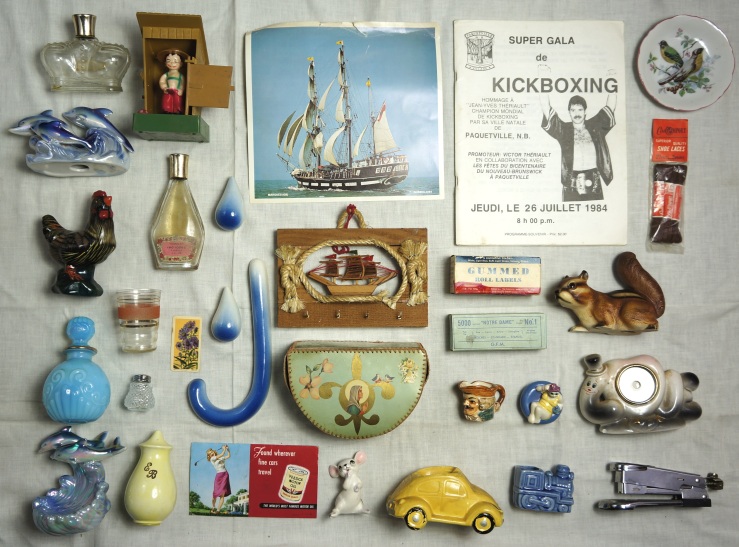 Lots of fun junk in here! This person must have liked kickboxing, as the program at top right is the second I found at this spot. This one is from a fight in Paquetville NB, and also doubled as an hommage to hometown hero Jean Yves Theriault.

I don’t think anything in this post is particularly valuable, but I think a lot of it will sell for between 50 cents and 5$ at a yard sale. That can add up pretty fast! 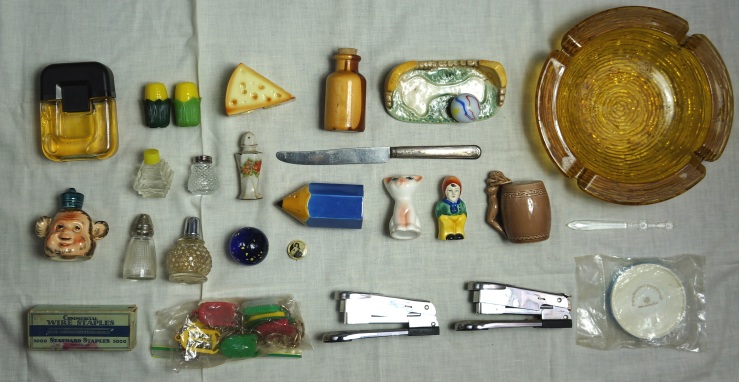 I’ll write at least one more post in this series. Hopefully more, if those bags appear on the curb sometime in the near future and contain some goodies!

Otherwise, my luck has been only okay recently. NDG has been my most productive neighbourhood of late. I found myself in Ville St Laurent on Thursday – I saved a bag of buttons and other crafting stuff, a vintage “à louer” sign from the era of the 7 digit phone number, and a Last Supper print with a super kitsch 60s frame. I also saved some cool stuff in Ahunstic, and met some homeowners who were more than happy to give me some of their old junk. Maybe I’ll share that story in more detail on a future post.

Here’s hoping there’s a warm weekend coming up in March. I’d like to get a little yard sale in, even if it’s not the “big one” at my garage. I need the cash, and would love to unload some of my treasures. I’ll consider pulling the trigger if the weather is calling for full sun, no wind, and a high of at least 6 degrees.