I had a productive run out in Cote St-Luc about a month back. This pile provided most of my finds.

My guess is that the garbage was divorce-related, given the presence of a few different wedding photos. The frames were pretty nice, so I removed the photos and sold them at one of my recent yard sales. The little trinket box and frame at top right were made of Alpaca (basically faux silver) in Mexico. There’s some other nice stuff here as well, including a silver ring (bottom right) that I sold to my mom. I also found a couple American postage stamps. I have no use for them, so I’ll give to the next American reader who buys something! 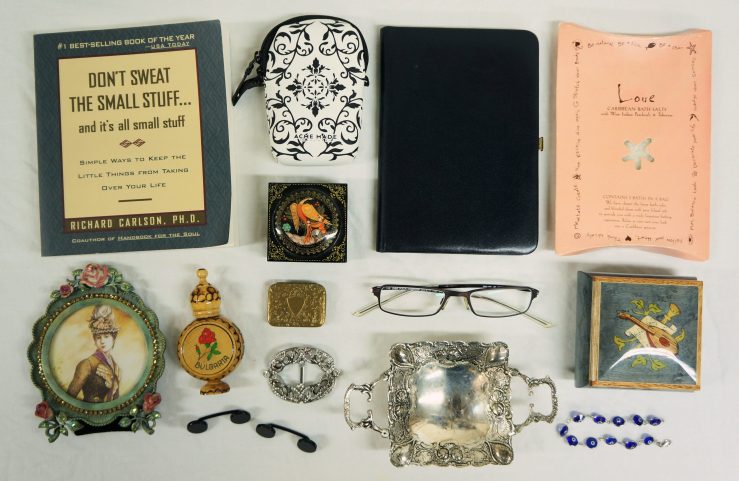 Here’s some more quality yard sale stuff. I particularly like that little brass box which looks to be pretty old. If I remember right that bracelet on the bottom right is sterling silver, and the eyeglasses are Dolce & Gabbana.

That Montreal Canadiens picture frame sold for 5$ at one of my recent sales. The Star of David pendant is marked 10k gold. There’s also a pair of Chanel costume jewelry earrings, though I can’t be sure if they’re legit.

The stamp box in the foreground had a sticker on it claiming to be an antique, with a price of 65$. I don’t think it was an antique however, it’s more likely that it was made in the 70s or 80s and made to look antique. The main giveaway were the screws and patina, neither of which looked particularly old. Regardless, all these items sold at the yard sale for a modest profit.

I also saved a few larger items. The lamp is nice, made in Norway by I forget which company. Mind the dust, I haven’t had time to give the garage a good clean yet!

I checked that spot the two weeks after but found nothing, so I guess it’ll go down as a one-hit wonder. 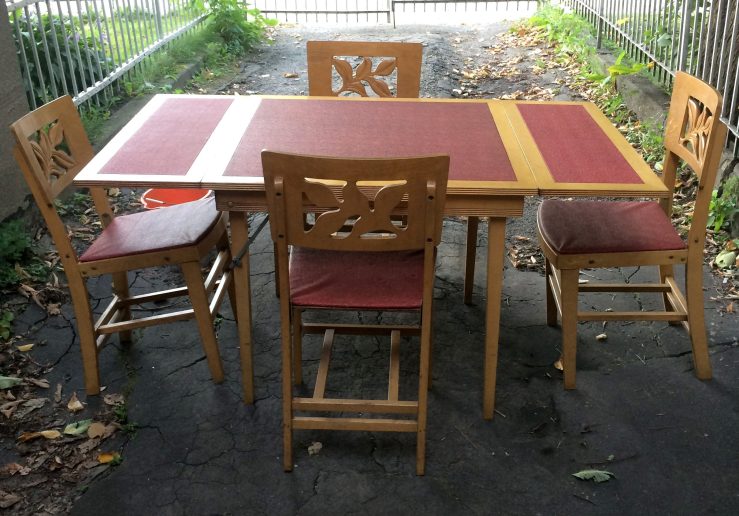 That same night I found a great folding table set just down the road. It had been attacked by some kind of white mildew or mold, but none of the pieces showed signs of permanent damage – I was able to clean it off using soap and water.

The pieces were made by Hourd in London Ontario. All were well made, but the folding table, which also extended to comfortably fit the four chairs, was probably the nicest folding piece I’ve ever seen. I sold the set to a friend for 100$, which I think is a good price.

Otherwise, I was hoping someone could help me figure out this little sewing machine I found. The thing that confuses me is that it’s about half the size (maybe 1′ long) of any other old, heavy sewing machine I’ve seen previously. It’s of the hand crank variety, so I expect the machine is close to 100 years old. 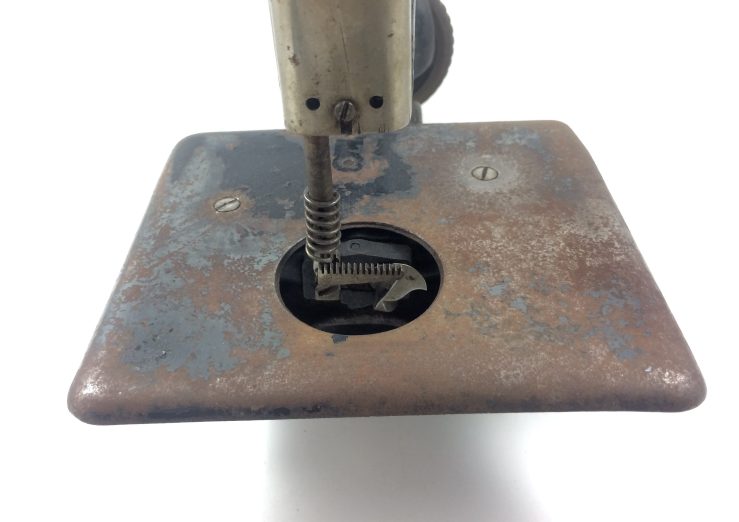 It has a few numbers on it, but unfortunately I saw no signs of branding. Here’s the throat plate area if that helps. If you’ve seen something like this before, let me know in the comments!