I had a great run last Monday in large part because of stuff I found at this pile of trash. The odd thing is that in previous weeks these guys (who were moving, the house was recently sold) had been pretty good about leaving free junk on the curb for people to take. One week there was a bottle of ant killer with “free” written on it, and another time there was a larger pile of free stuff including clothes and kitchenware. Nothing too exciting really, but the gesture was nice.

Given that information I didn’t expect to see much here, maybe some pantry remains or garage junk. But I ended up saving some decent stuff from those black garbage bags, some of which was better than anything at the free pile. Maybe they just ran out of time, or maybe one person in the household was more generous than the others.

None of the watches are very exciting but they’ll make me a few bucks at future yard sales. That watch in the middle, below the camera is interesting mainly because there’s a couple silver charms on the band, including an old silver dime. The iPod works great and is actually loaded with some pretty good tracks. The Walkman is a nice vintage one, perhaps one of the earlier models – I expect it to go for around 40-50$. 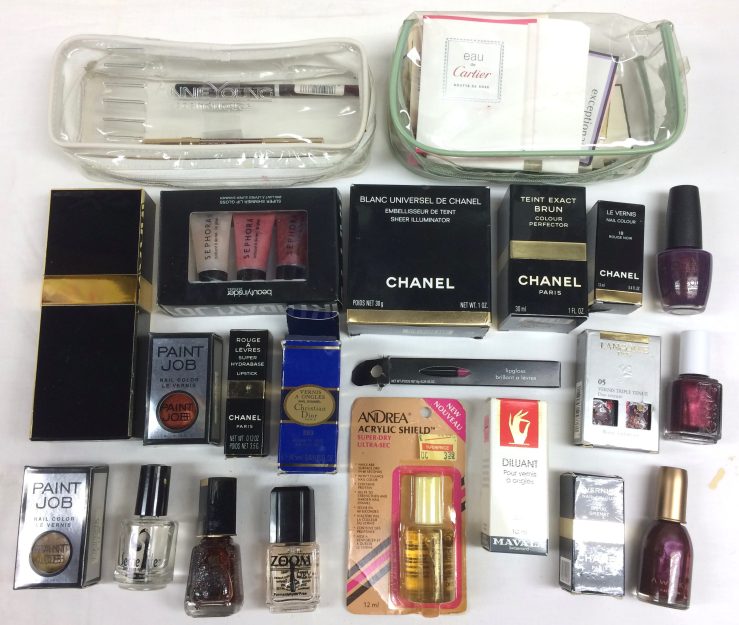 I saved a whole bunch of makeup. I thought a lot of this was new, but it seems whoever owned it just had the habit of putting the bottle back in its original box after they used it. Still, the brands are good and there’s a lot of life left in some of the bottles. I’ll sell them at a yard sale, but I’ll wait until I have a helper to put them out – I don’t really know anything about makeup, and feel awkward selling it to people. The Chanel rechargeable perfume bottle is a nice get, it’s around 35% full and worth around 30$.

The iPhone 4S seems to work just fine. That 20$ card came in that Chanel sleeve and I’m guessing it was part of some customer appreciation event. The card is still in plastic, so maybe it’s still got the 20$ on it. Otherwise, I saved a bunch of coins, a portable phone without the base, and a nice costume jewelry necklace (though I have no idea how it’s supposed to work). 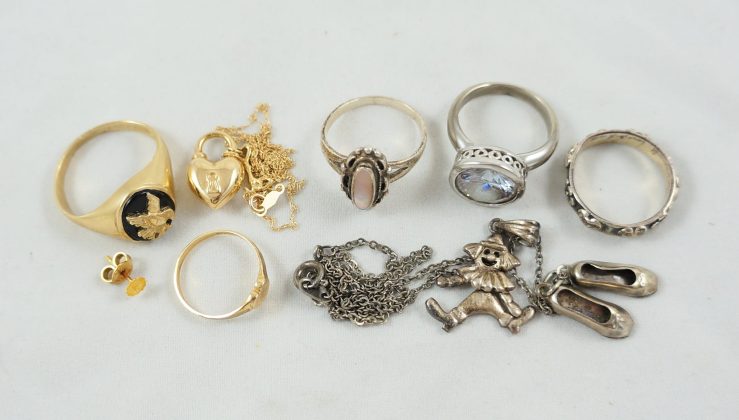 What really made by day though was the finer bits of jewelry. I saved three pieces of 10k gold jewelry weighing 6.45g as well as some silver. The gold altogether weighs 6.45g and is worth about 135$ for scrap alone. However, they’re nice pieces in good condition and if anyone is interested send me an email – I’d ask a bit over the spot price for each.

Otherwise, I saved the usual miscellaneous random junk including a couple power bars, an old (ancient, perhaps) iBook laptop, some incense, a few figural candles, a sock full of baseballs… 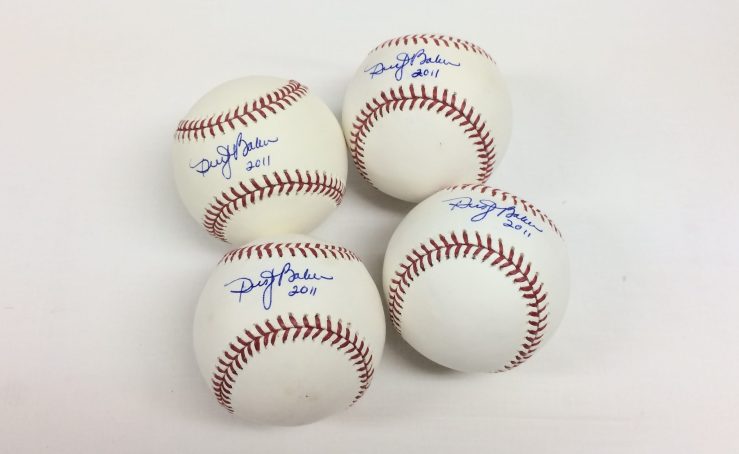 Oddly, each ball seems to have been signed by Dusty Baker in 2011, when he was managing the Cincinnati Reds. I have no way of knowing if the balls are legit, though the signatures do look like his. Regardless, it’s not like Babe Ruth signed them, and the value is pretty limited regardless – maybe 10$ a ball without a certificate of authentication, which wouldn’t be worth getting for low-value items like these. Regardless, they’re kind of neat.

My night was further buoyed by a couple other finds not far away. Another sold house produced a bit more jewelry, including a few more gold pieces. It’s uncommon that I find gold once in a night, let alone twice. The items I know to be gold here (the pinkish earrings on the left could be rose gold, but I can’t see any hallmarks so I won’t count them) weigh 4.4g and thus are worth around 90$ for scrap. But again, if anyone has a particular interest in one of these pieces let me know (unfortunately, the earrings at top right are missing stones and thus best suited for scrap). I also saved some silver, including a pair of earrings signed Ti Sento which seems to be a well known brand.

Last but not least, I found a collection of vintage colognes in front of yet another house. I think the owners were preparing to do some renovations as I saw a little pile of wood out front last week. Anyways, most aren’t too exciting. However, the Ralph Lauren colognes are fairly old – the spray is original formula (dated 1978), while the other is either original or not far from it. I bet I could get around 60-70$ for the splash and 40-50$ for the spray. However, I could elect to keep one of them – it actually smells very good, kind of like pine. Very distinct.

Otherwise, the finds have been pretty good lately. Some guy got really mad at me for trash picking today, in fact he might have been one of my top three angry gooms (get out of my stuff!) of all time. But oh well, that’s just something that happens from time to time. It’s too bad though because he’s been throwing out interesting vintage stuff for weeks, and now it might be hard to go back if he tosses anything else. We’ll see what happens I guess.

I’m thinking of doing a sale tomorrow on Bernard / Waverly near that school if anyone wants to come. I’d probably be out from around noon til five, perhaps a bit earlier or later depending. Edit: I’m actually going to take the day off instead. Maybe next week!

22 thoughts on “But you were doing so well!”