In the spring I was cruising around Villeray and spotted an intriguing collection of bags on the curb. Inside I found some cool old stuff, including an old iron and other items in their original boxes.

None of that stuff was super valuable, but finding old things in their boxes can be a good omen that other quality trash might emerge. Over the next few months I made sure to check that spot every garbage day. There wasn’t always a heck of a lot, and a good portion of the stuff was dirty or damaged by dampness. However, I still found plenty of interesting items, including two finds of particular note.

I managed to get 20$ for the Commodore calculator at the bottom left. The internals were probably bad, but it was in decent cosmetic condition and it seems that collectors like the model. There were plenty of stencils here as you’ll see in future photos. Also, whoever lived here probably worked for Canadair as I found a number of items related to the company. My plan it to group all the Canadair items together and sell them on eBay to an aviation collector. 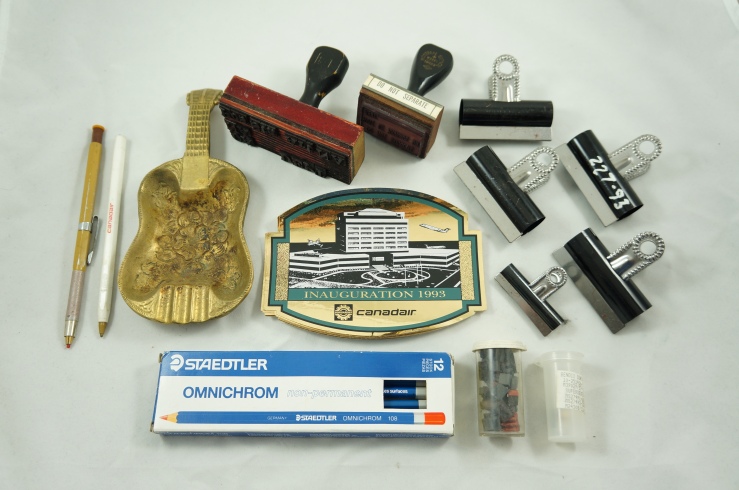 I have this sealed Nintendo game listed on eBay for its sticker price of 39.95$. That might be asking too much, but maybe someone will bite.

I found this odd wooden box, which I’d guess is a little tube radio made as a high school project. I have no idea if it works or how one is supposed to work it, but I’m guessing that someone at a yard sale will buy it regardless.

I’d never seen a figurine like this before, so I was pretty interested to find out what it was. Honestly, my first guess was that it was sci-fi related – the dress, “helmet,” pose, and eyes reminded me of sci-fi characters from the 30s and 40s. However, it turns out it’s much more likely a Balinese figurine from the 1950s. In my defense it does look to be an unusual variant of that type of figurine.

I found some neat old books, including a large collection of airplane construction training books published around 1940. They’re pretty neat, see the pictures below if you want a better look (and remember there’s a “view full size” link on the bottom right of the page if you want to zoom in a bit). I listed them for 75$ but no one’s bit yet.

Otherwise, most of the books were old textbooks dating back to the 1920s.

None of them are super valuable, but they do make good yard sale material. I particularly like old geography textbooks, I’ve loved looking at maps ever since I was a little kid. Here’s a map of the regions of Quebec c. 1920. I grew up in the Pontiac, not far from Bryson.

It’s a small piece of paper, a little larger than your average business card. On it was printed the Montreal Canadiens 1944-1945 season schedule. It was made for Henri Henri, a local hat shop that’s still open today. I’m not sure how it was intended to be used, but it does say to “insert [the card] into your leather hat band.” Henri Henri claims to have invented the hat trick by offering a free hat to any Canadien that scored three goals in Montreal, though others have made similar assertions. Regardless, I tried hard to find another such schedule online but had no luck. It seems to be a pretty uncommon piece.

At first I thought it was cool and that a collector would probably pay around 20$ to have it, but after seeing what some other vintage hockey schedules were selling for on eBay I decided to price mine a fair bit higher. It ended up selling fairly quickly for 150$, and I got good feedback to boot. Pretty sweet eh? Not bad for a small piece of paper!

This spot provided another unusual but profitable find. I’ll share that with you soon enough.