Over the past two weeks I’ve found a bunch of great stuff at one of my spots in NDG. 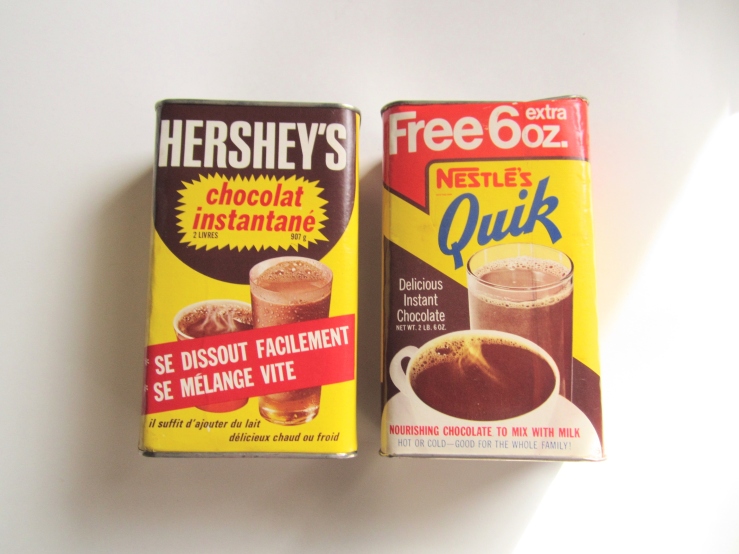 This pile was big but not that great. I did save some vintage food though, including these two apparently never opened containers of instant chocolate power. 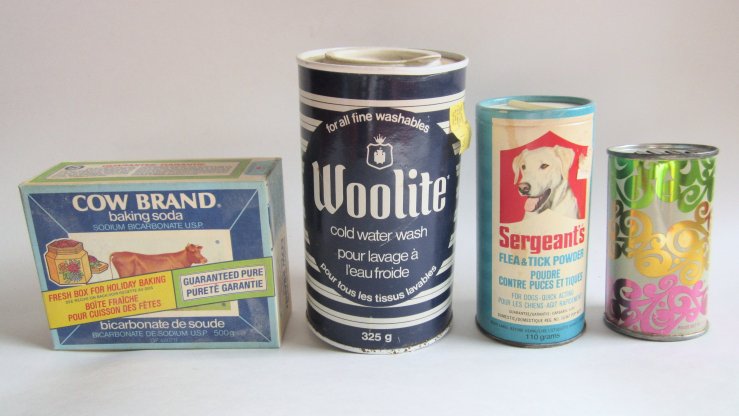 I’m not sure why, but I get a kick from saving old food and keep a small collection of old containers. 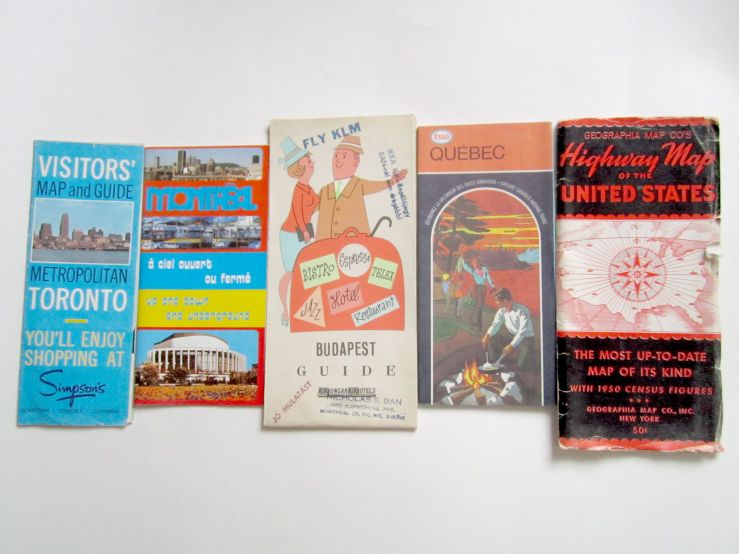 The next garbage day I drove by and saw an even larger pile. There was a bunch of furniture on the curb, much of which I really liked but couldn’t fit in the car. The vintage love seat on the left was a particular favourite of mine.

As I was perusing the furniture a middle aged guy opened the front door. He told me there was a lot more furniture inside that I could have if I wanted. I took a tour of the house, and made arrangements to come back the next day when the car was empty. He told me he had inherited the house and needed to clear it out so that it could be sold. 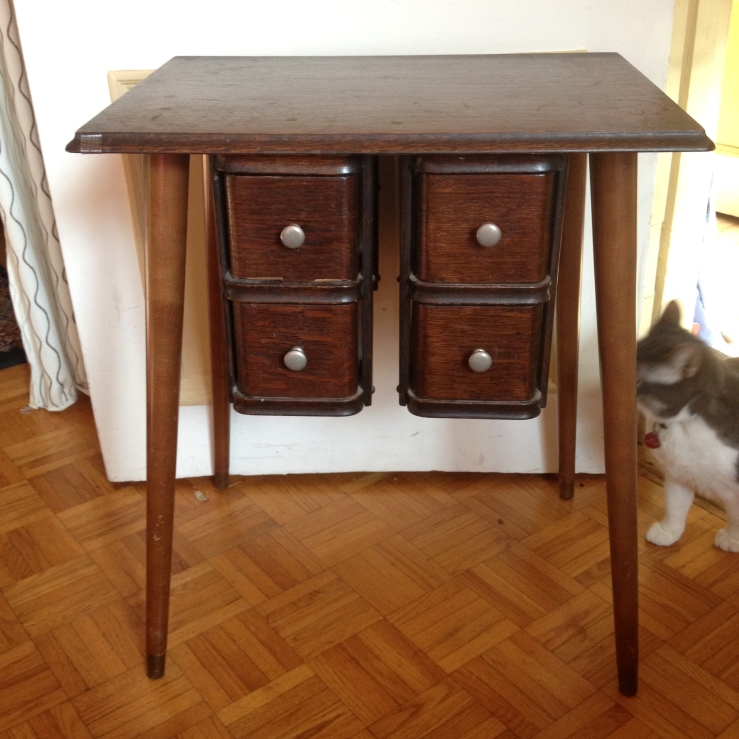 This funny little table was one of the pieces I saved from the curb. The table is an odd mishmash, combining a top and drawers that are probably around 100 years old with some wooden legs that were likely made in the 70s. It’s a little wobbly and looks a bit alien if you use your imagination but overall I think it’s kind of cute. It’s currently in the corner of my room, covered in finds from the past weeks. 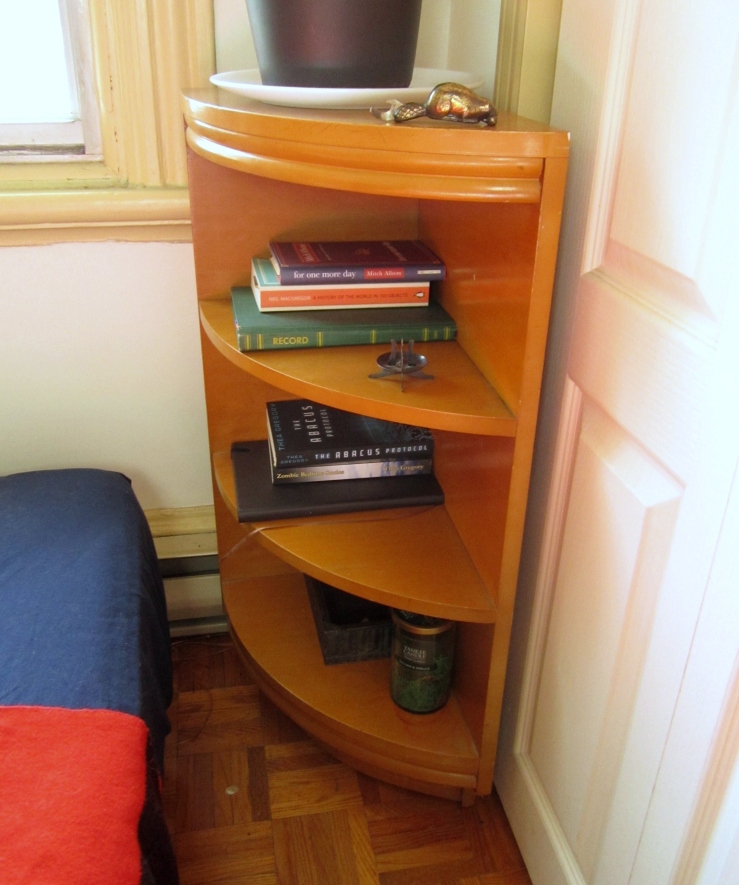 I also saved a pair of corner bookshelves. They’re nothing fancy, but they’re sturdy and work well as bedside tables. 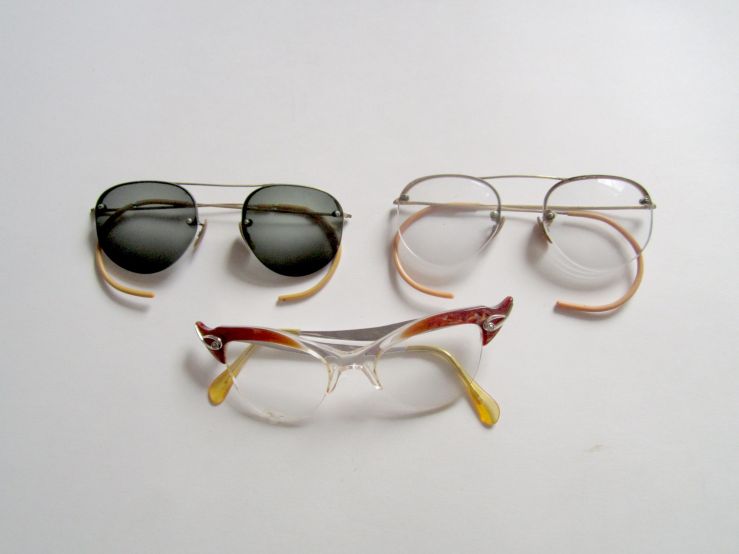 There wasn’t much of interest in the bags, though I did find a collection of vintage glasses … 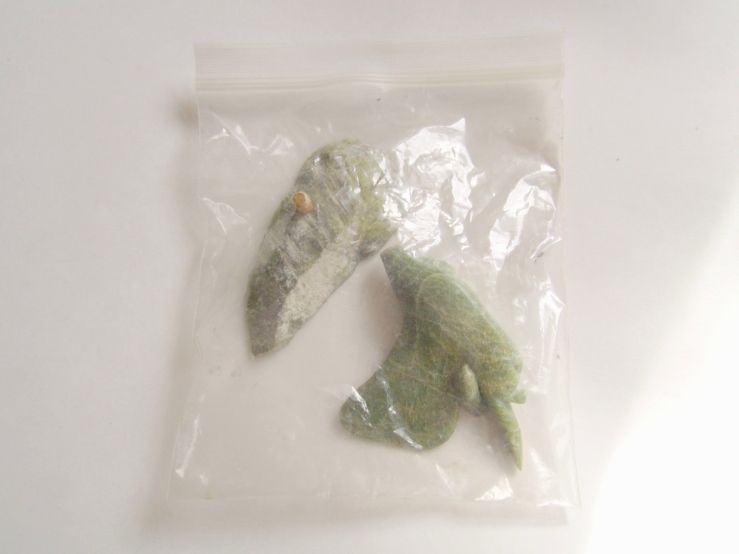 … and a slightly busted stone bird, which I should be able to glue back together fairly easily. 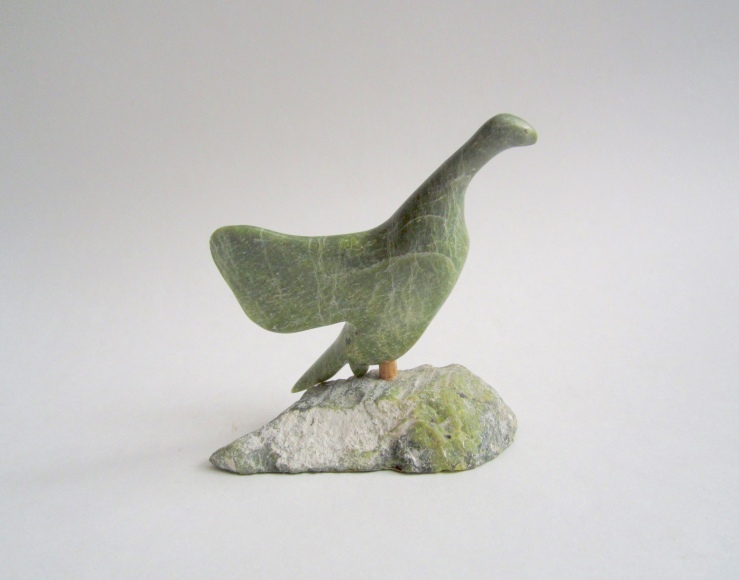 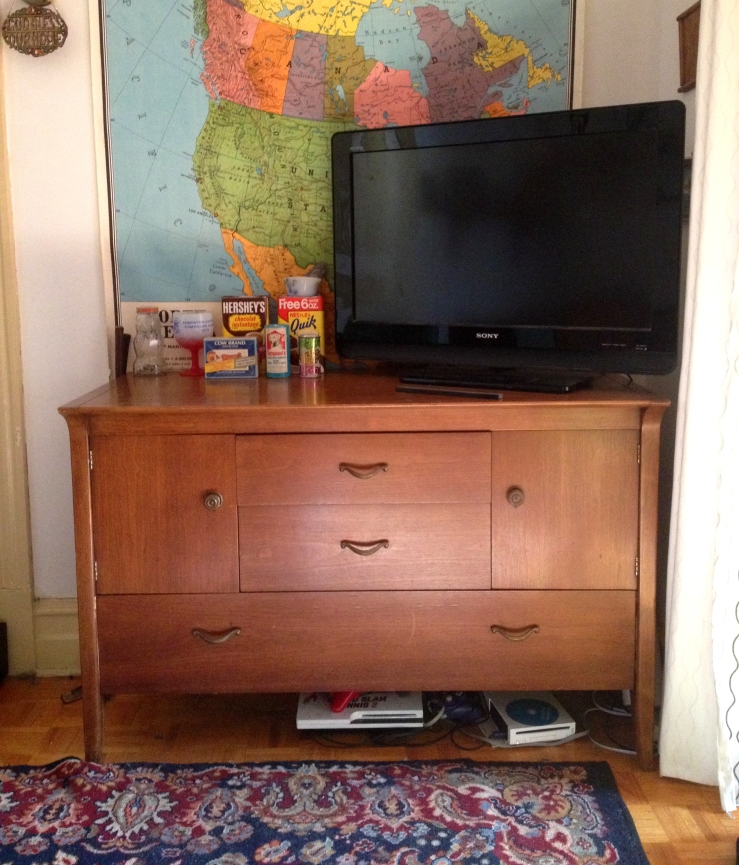 I went back to the house the next day with my friend Sarah to check out the furniture. He said most could be had free of charge, save for a few pieces his relatives wanted. I took an interest in this credenza and he helped me bring it down to the car. I was thinking recently that I wanted a bit more storage space, and this piece (especially because of the top middle drawer, which is divided into four sections) matched my needs perfectly.

Once I got it home I took a closer look at the credenza and found out it was made by Drexel, a classic mid-century furniture maker. This piece was part of their “Profile” line. As such it’s worth a lot more than I expected when I took it. This one is selling for over 1500$ online, though it is in near perfect condition. Mine is worth a fair bit less than that, given some minor dings and damage, but it’s still a nice get and a great addition to my room. 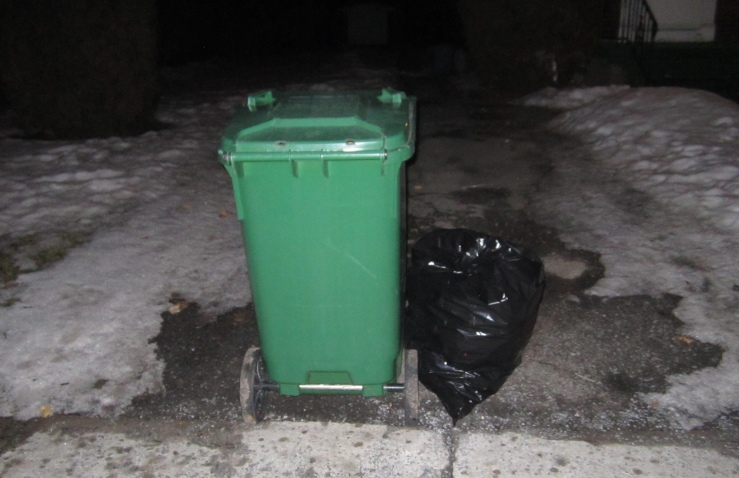 The guy was clearly pretty cool. In addition to the credenza he also gave us a huge vintage punch bowl and was very pleasant all around. He also seemed actively interested in donating some of the items to charity. Yet, when I returned the next trash day I found some great stuff, none of which I had seen in my cursory look over the place. 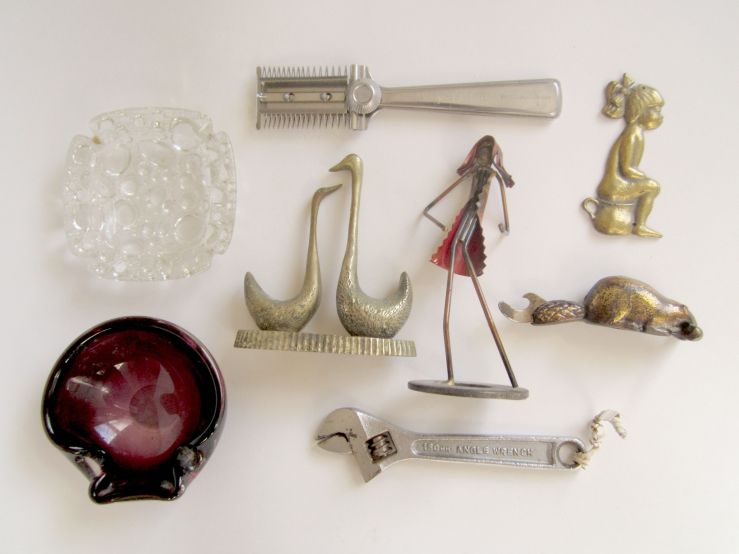 A lot of it was what I’d call “nice junk,” or things that aren’t worth much but are cool nonetheless. Yard sale stuff basically. My favourite of this bunch is the beaver bottle opener on the right which I plan on keeping for myself. It’s pretty heavy and I assume fairly old. 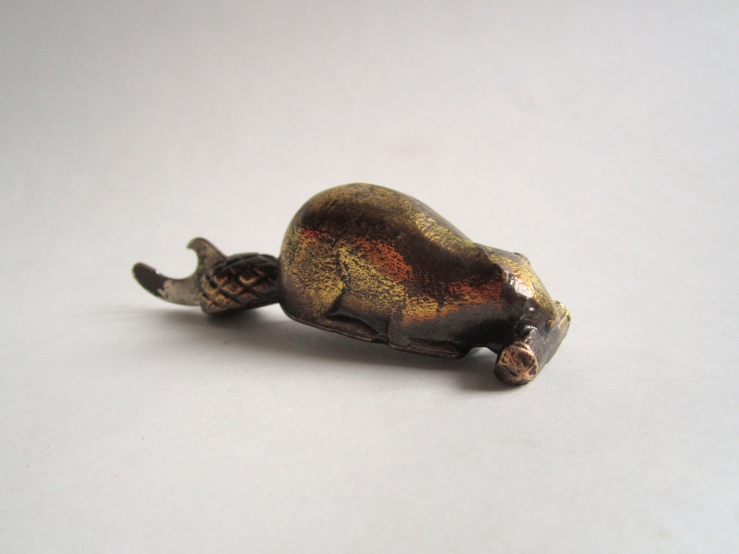 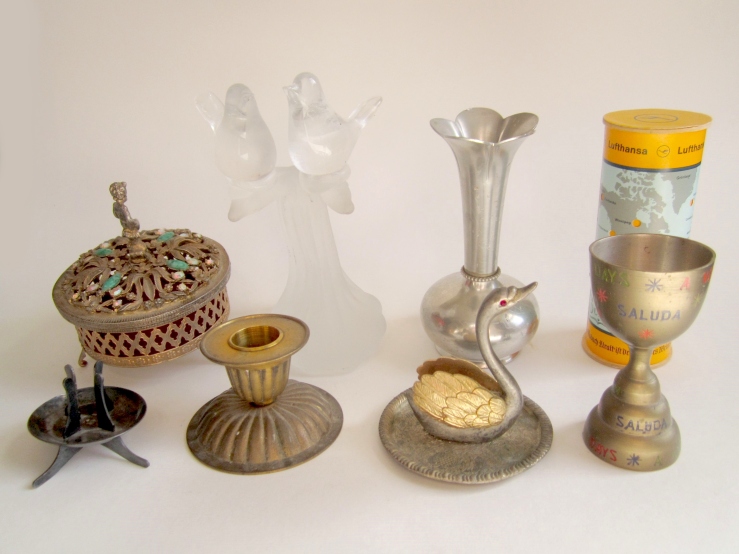 The candle holder on the left has a modernist look to it and is marked as being Danish silver plate. 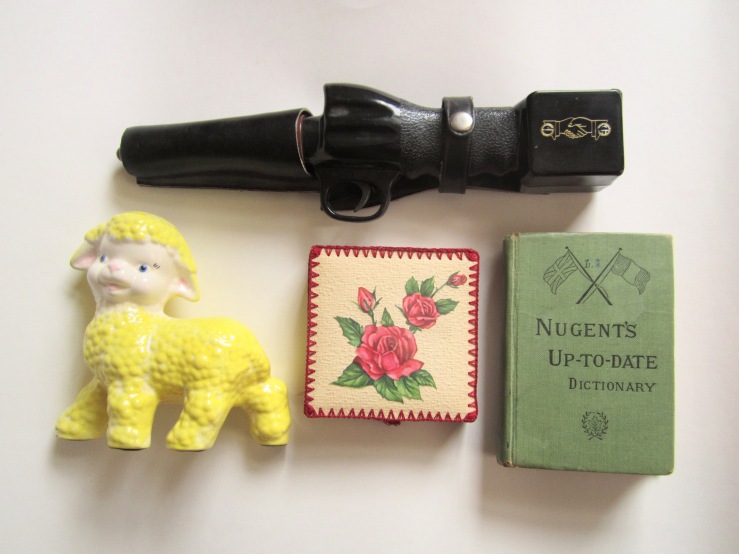 The gun thing is a novelty toy. When you pull the trigger a plastic stick shoots out of the barrel. It seems pretty elaborate for a gag – it even has a leather holster. 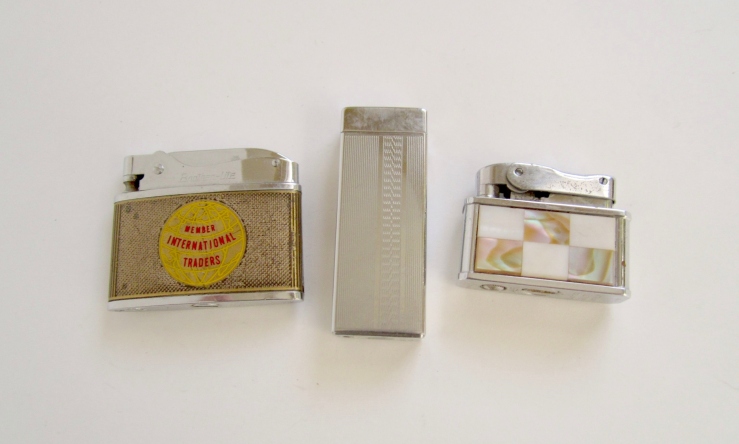 The lighter in the middle looks to be a knockoff Rollagas. 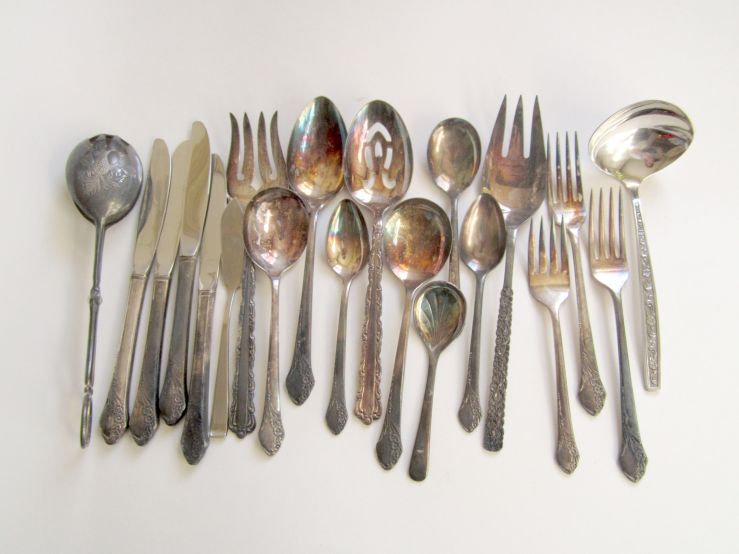 This silver plate cutlery was stored inside a small plastic pharmacy bag. Most of it is Oneida Tudor plate, nothing super fancy but definitely better than the average. 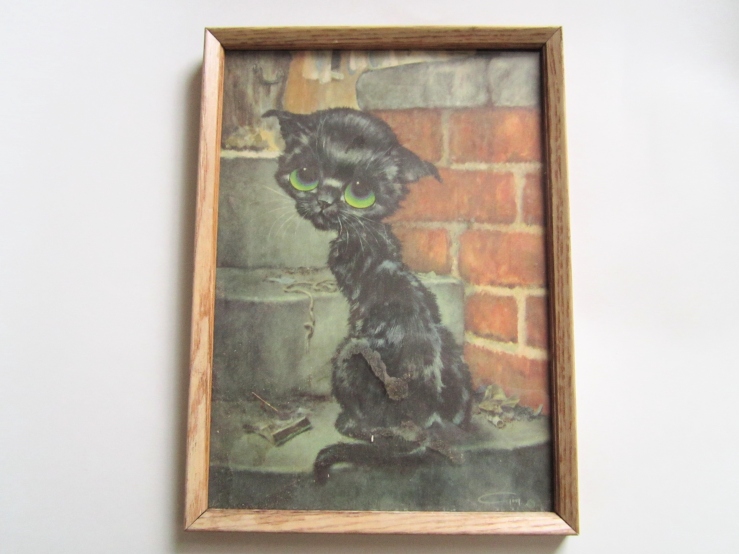 As I was given the tour I noticed this cat picture on the wall. I was told that it was going to be given to a friend who runs a cat shelter. I guess the plan changed as it turned up in the trash bag. Fortunately the glass didn’t break, and I was able to clean it up and trade it on Facebook for beer and chocolate. Apparently it’s a “Pity kitty” print, which were most popular in the 1960s. 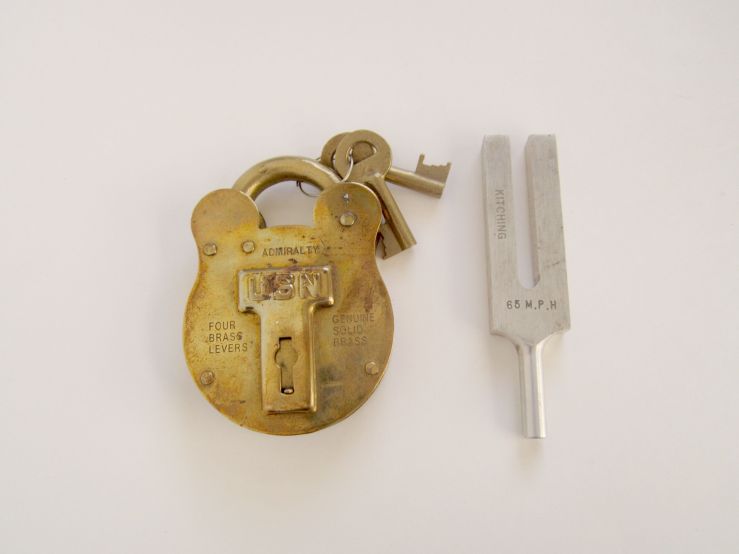 Now here’s some plain old nice stuff. One of my favourite finds was the old solid brass USN padlock on the left. It comes with two skeleton keys and works just fine. It’s worth around 50$. On the right is a Kitching tuning fork marked “65 MPH”. I wondered why it would say that, and learned that some police radar guns are actually tested using these forks. The more you know! It’s worth around 30$. 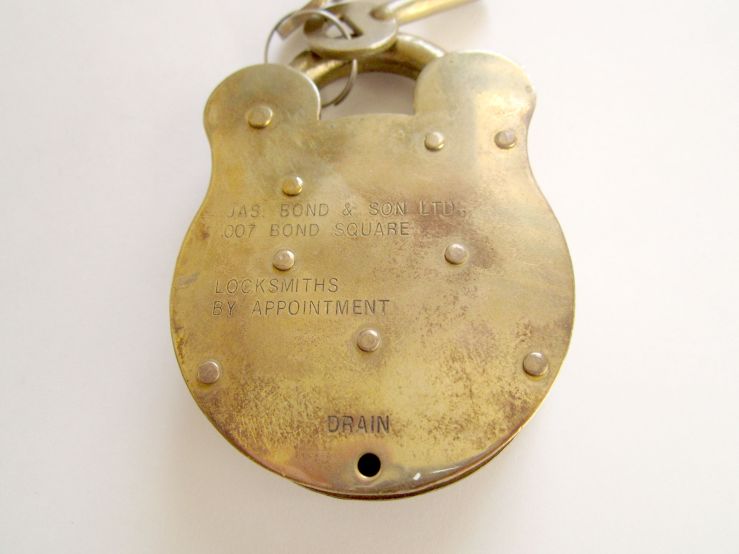 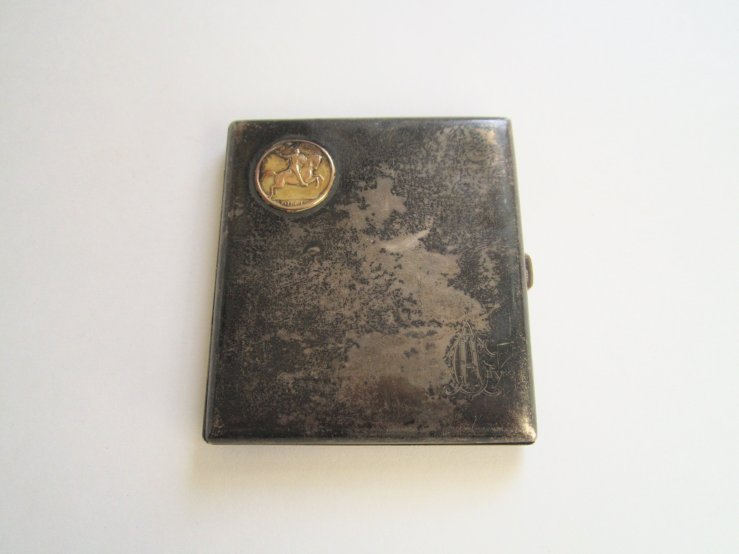 My best find though was this old silver cigarette case. It was tossed into the recycling bin. 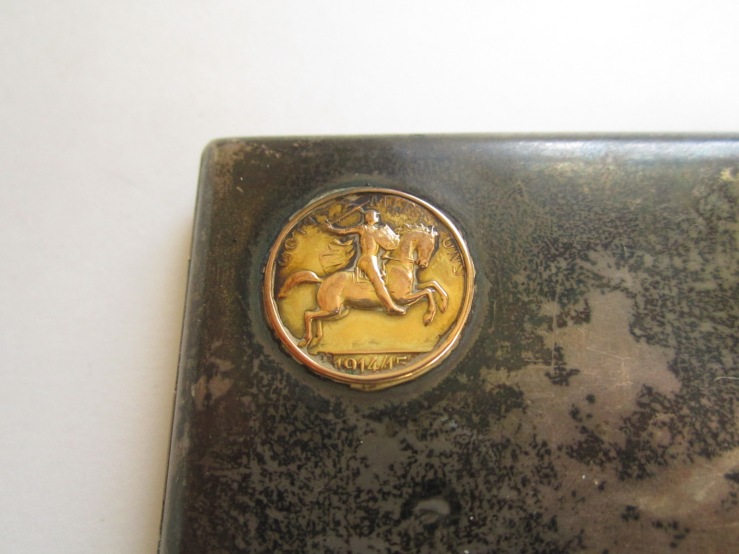 A little coin is affixed to the top left hand corner. It’s marked “Gott Mit Uns,” or “God with us.” That slogan was widely used by the German military between the late 1800s and the end of the Third Reich. It’s also dated 1914/15, or around the beginning of WWI. I assume the coin is made of brass, but I should make sure it’s not gold before selling it. 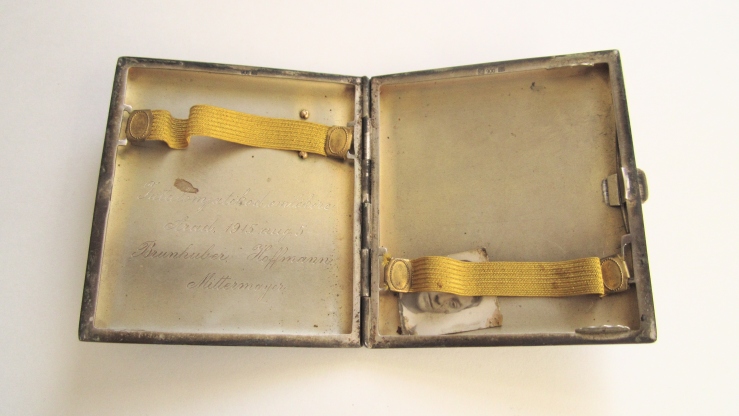 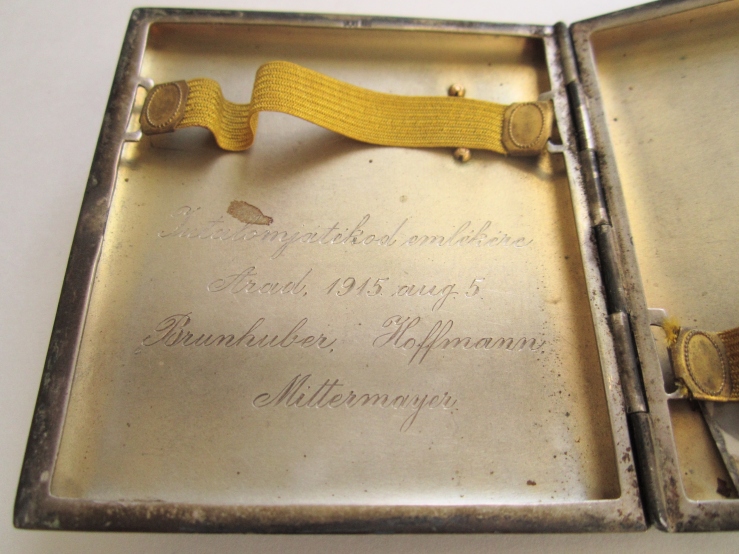 On the inside is an inscription written in Hungarian. A friend was able to translate it to “Given in memory of Brunhuber, Hoffman, Mittermayer.” It’s dated August 5 1915. Also mentioned is the now Romanian city of Arad. 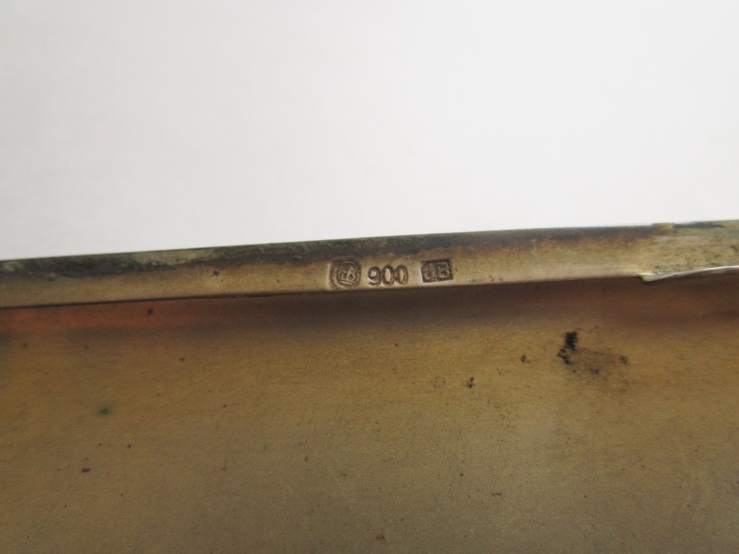 I’d like to know more of the story behind this piece. Its origin is clearly German, given this silver mark and the Gott mit uns coin. There’s also the mention of three different German surnames. While Arad is now in Romania, at that time it was part of Austria-Hungary – an ally of the German Empire during WWI. Romania didn’t enter the War until 1916, but the Central Powers were at war with neighbouring Serbia from the beginning and may have had troops stationed in Arad. Arad was also the site of a brutal Serbian POW / internee camp.

I tried to find other examples of this cigarette case online but saw nothing quite like it. There are similar cases, but they all seem to feature a large brass badge instead of the smaller coin that this one has. The coin itself is also unusual, as I was unable to find any others like it in my research. An all brass cigarette case recently sold for 70$ + shipping, while a silver one sold for 72$. However, both were sold using auctions, and I suspect I can get a fair bit more for mine if I set a “buy it now” price. Regardless, if you have any potentially interesting information about this cigarette case let us know in the comments!

I think it’s commonly assumed that the things I find are tossed by lazy, wasteful, selfish, or privileged people. That’s definitely true sometimes, as is likely the case for a recent find that I’ll share with you in my next post. However, it’s also true that a lot of nice things are tossed by good, relatively unflawed people. I have a few theories about why this is the case.

First, your average person knows nothing about the collectibles market. Many think that only the high-end, “Antiques Roadshow” kind of stuff is worth any money, and assume the rest is worthless old junk. In a way that’s true, because most of the items I sell are more or less worthless unless you know how to use eBay and otherwise understand that a market exists for the item. Many people aren’t even familiar with the value of silver and gold, and see the dark tarnish of silver as proof that the thing is dirty old junk.

Second, people with frugal parents might assume their old stuff is junk, and treat it as such when they inherit it. If there wasn’t much money in the family I can see how someone might assume that the stuff around the houses wasn’t worth much either. However, some common things in the past (like vintage 1960s toys) gain a lot of value with time, and items previously inherited (as I expect is the case with this cigarette case) will be extra old and potentially valuable.

Third, estate liquidators or appraisers can set low expectations for these inherited things. This guy told me that he contacted an estate appraiser but was informed that nothing was of much value, except for maybe some very nice art on the wall. They apparently weren’t interested in doing the job. That’s fair enough, because estate liquidators make their money mostly from wealthier households and this would have (at least from what I saw) been a below average job. However, that experience may have reinforced his idea that none of the stuff was of much value to anyone, leading the way for it to be tossed.

Lastly, clearing out a house (especially by yourself) is hard work. It’s physically and emotionally taxing as well as extremely time consuming. From that perspective, you can understand how one might not think clearly about some of the items they’re dealing with. It’s easy for me throw something on eBay, but that’s a lot more difficult if you know nothing of eBay or the market and have a lot more work to do regardless. It’s sometimes easier (and easily justified, given the points above) to just throw something out and move on the to the next bunch of stuff.

So, do you have any theories about why nice things get thrown out, whether by cool people or otherwise? Have you ever thrown out something you “shouldn’t have”? If so, why? Let us know in the comments!

43 thoughts on “Why do good people throw out nice things?”