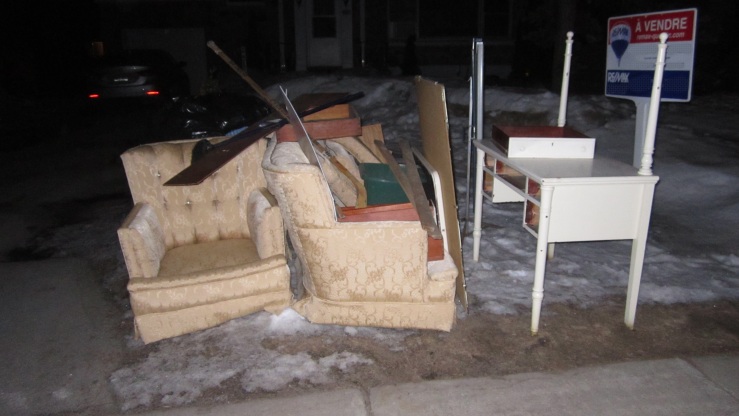 My focus is usually on saving smaller, easily stored things, but last week I ended up taking a few bigger pieces. This pile sat in front of a familiar house in Mount Royal – the same one that tossed the books from last week’s post. They appear to be slowly clearing out the house. 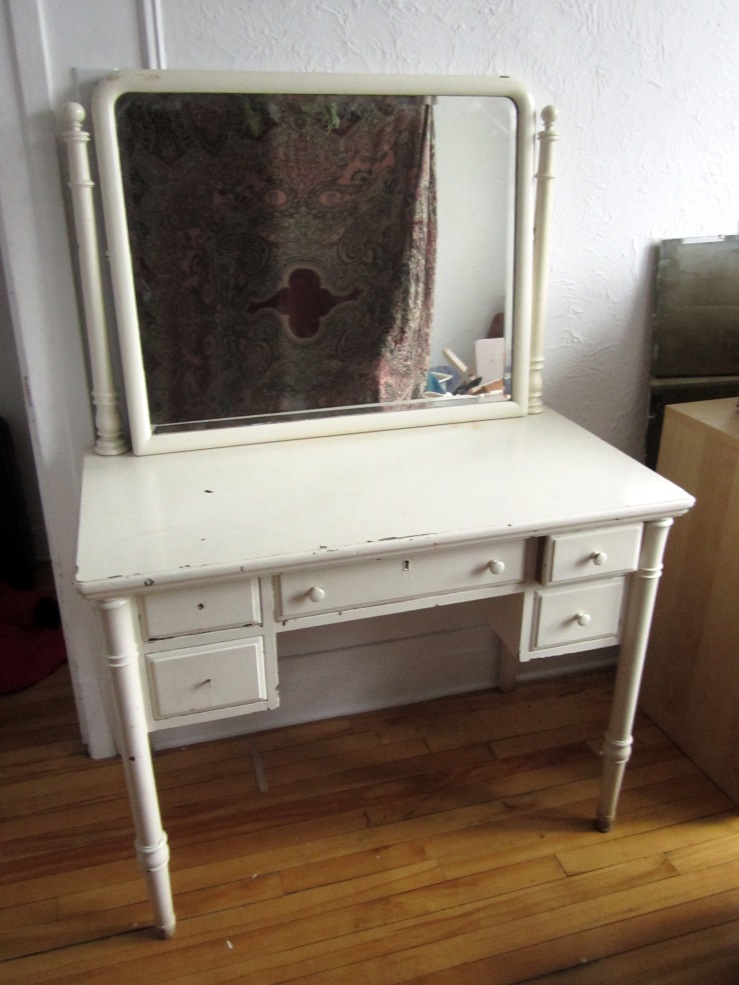 The first thing I noticed was this nice old vanity. It’s coated with a white enamel paint, as was the style back in the day. It just barely fit in the car, only after I took off the arms that hold up the mirror.

There’s a bit of wear to the paint and a couple of missing knobs (which should be easy to replace) but it’s a very beautiful piece. I gave it to my friend Sarah, as she’s moving into a new place soon and could use the furniture. I also don’t have much space to store such things myself, but I hope to have a bit more room soon. More on that next week, if it all works out! 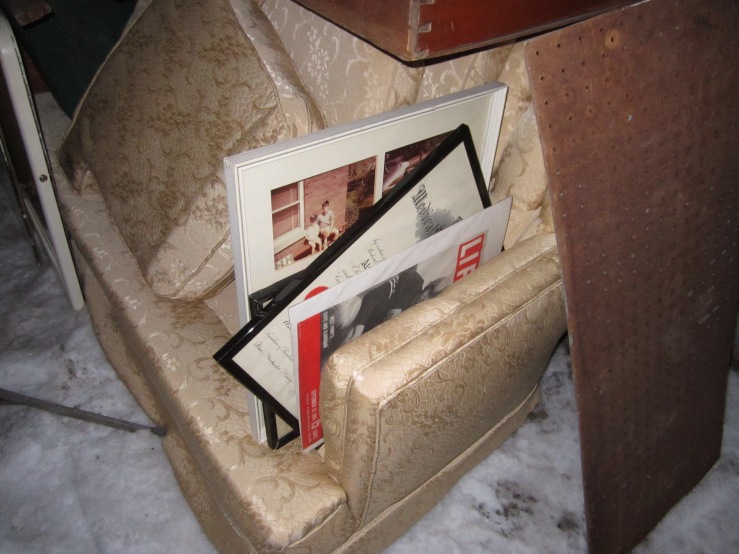 At the back were a few picture frames. Two held degrees dating back to the 1950s, and another held a collection of family photos. 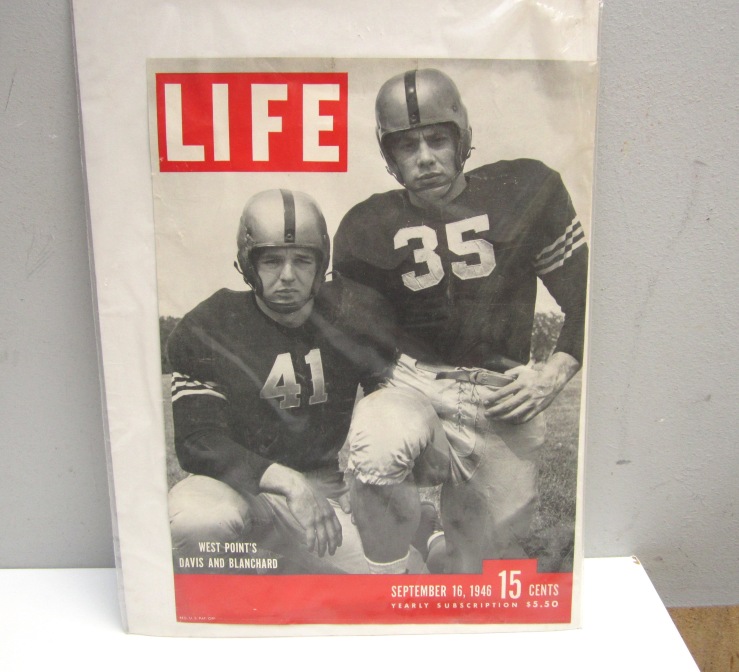 There was a cover for a 1946 Life magazine amongst them. 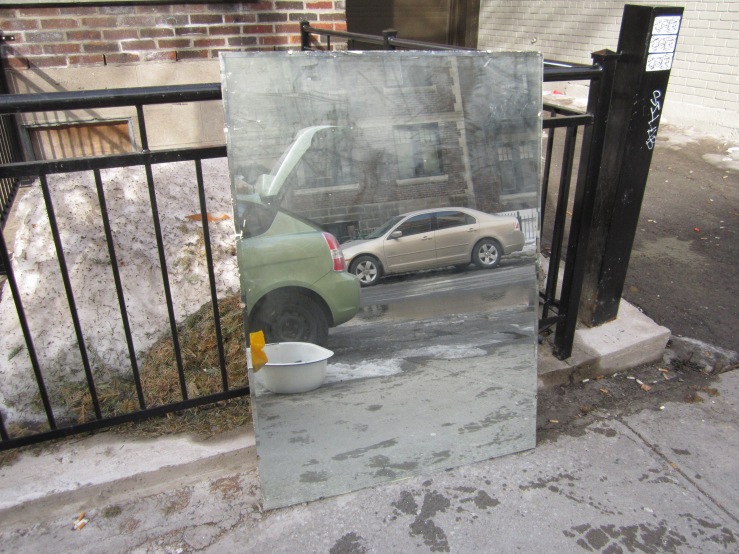 Otherwise, I saved another big mirror … 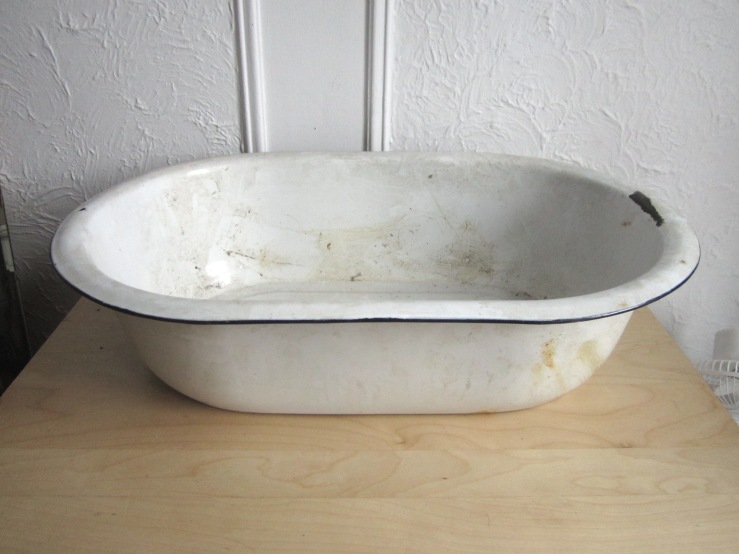 a baby bath (which will look nice after it’s cleaned up!) … 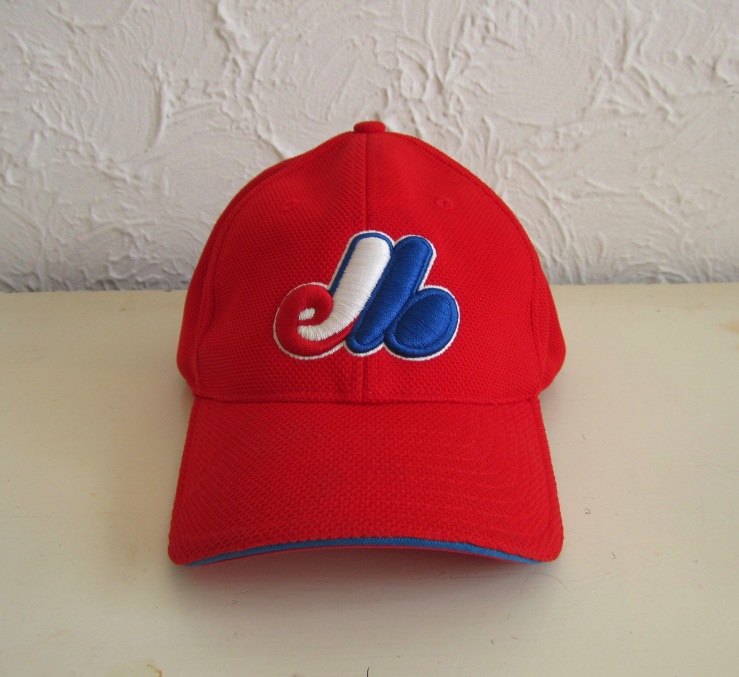 and an Expos cap, still very clean and in excellent condition. This was actually in the recycling bin, for whatever reason. I miss the Expos! 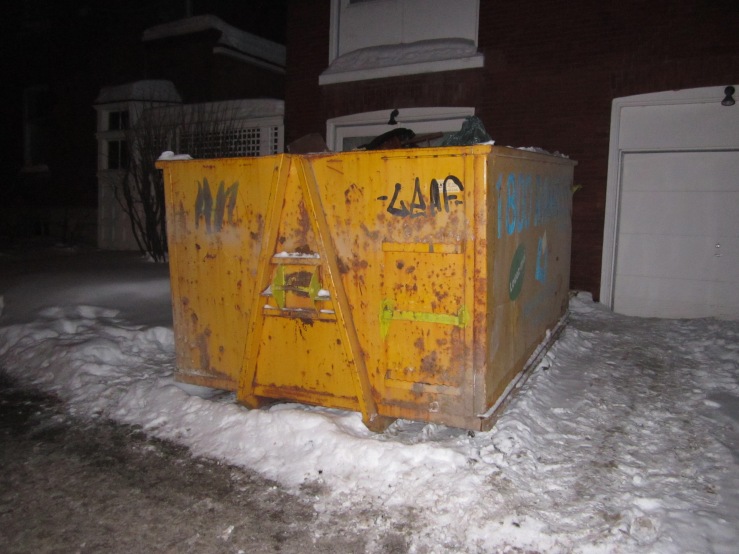 The week was otherwise pretty quiet. A few recently productive spots were barren, while others produced nothing of note.

I did save a few things from the “enigmatic dumpster.” I’ve been visiting a few times a week ever since my nice silver finds back in early February.

I haven’t found much here in a while, outside a tonne of amateur art. Seriously – there’s been around four bins filled mostly with old paintings and canvases. When I checked on the bin early in the week, there was a bunch more amateur art … 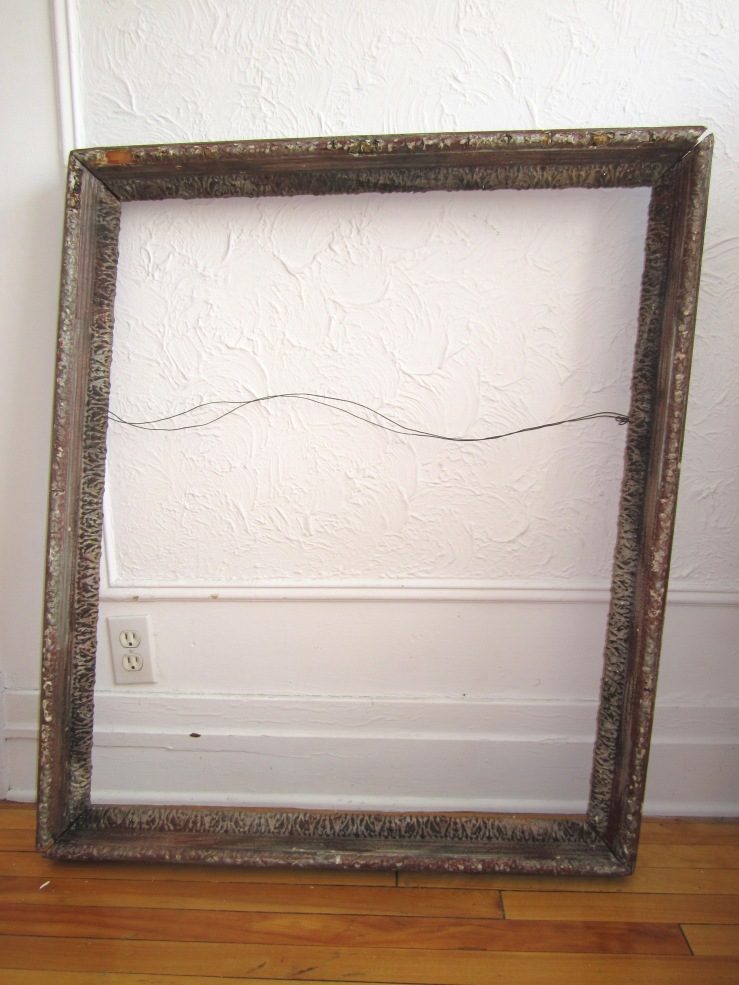 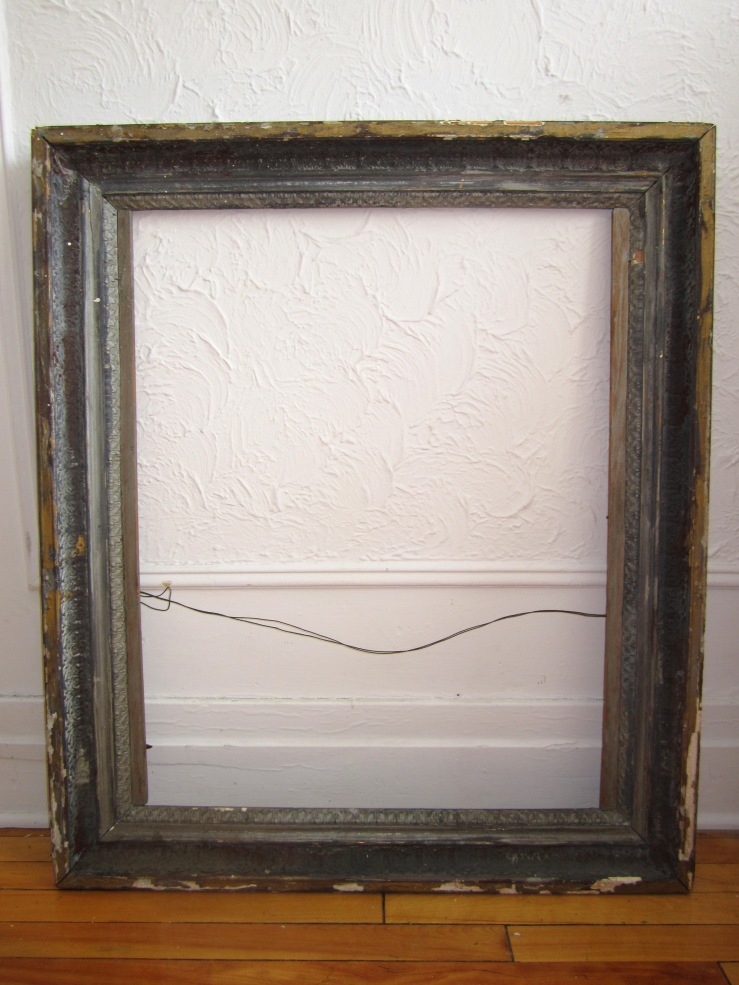 They have a couple dings, but I still think they’re pretty cool. They look like they’ve been painted – and not necessarily well – many times over the years. They’d probably look great with a new coat (maybe a classic gold?), perhaps after stripping some of the old paint off.

The trim is really nice. How old do you think these might be? My guess would be the early 1900s. 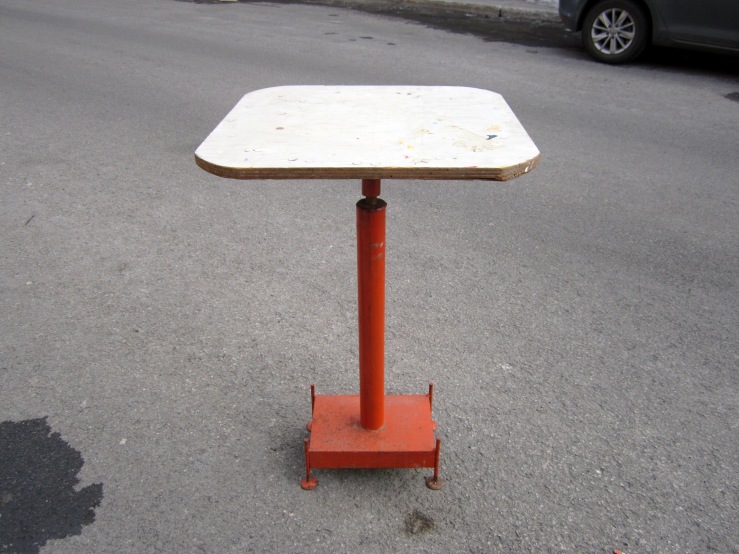 I visited again later in the week and came across something unexpected: Competition! More specifically, it was someone I know who follows the blog and who recognized the dumpster after reading about it here. It was fun to pick with someone else for a change. I also have to make sure going forward that my photos don’t make my locations too obvious. I can’t afford to lose out on top-quality stuff very often.

This time around I saved a table with a heavy cast-iron base and removable top. The top is designed to rotate, so it might be for making pottery or something like that. It’s about 4′ tall.

I also saved a selection of folk art, a large Tupperware bin, and a carved wooden bird.

Overall, last week certainly wasn’t my best, but things have definitely picked up a bit recently! I’ll post about that stuff soon, as per usual!

“Things I find in the garbage” now has over 1000 likes! I was at around 935 before Cathy (the operator of the LA-based trash-picking Facebook page Canning with Cathy) linked to me on the Dumpster Diving Divas Facebook page. It’s just another cool milestone in the evolution of the blog.

The 30th was also my 28th birthday! I spent the day doing next to nothing, which was nice because I had been working a bit too hard recently. I went on a garbage run at night and found some great stuff, which was the icing on the cake! Many thanks to Sarah for taking me out for food on multiple occasions. 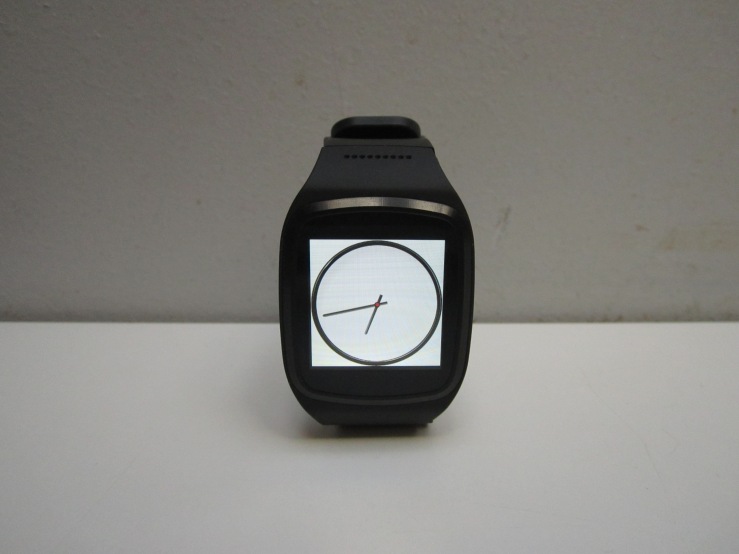 : On eBay for 90$. Found in front of a very rich house in Westmount. 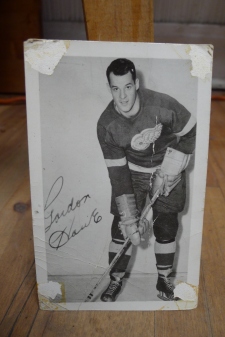 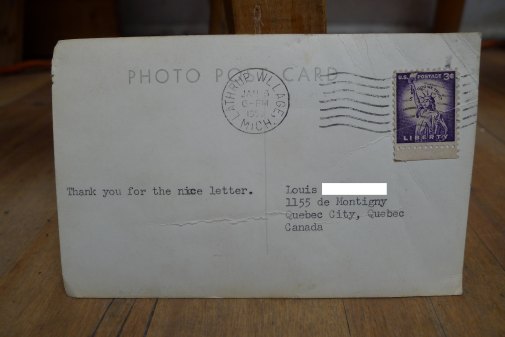 : On eBay for 23$. I’ve had this for quite and while and am happy to see it go! I’ve already received positive feedback. Found in Mount Royal way back in November 2013. 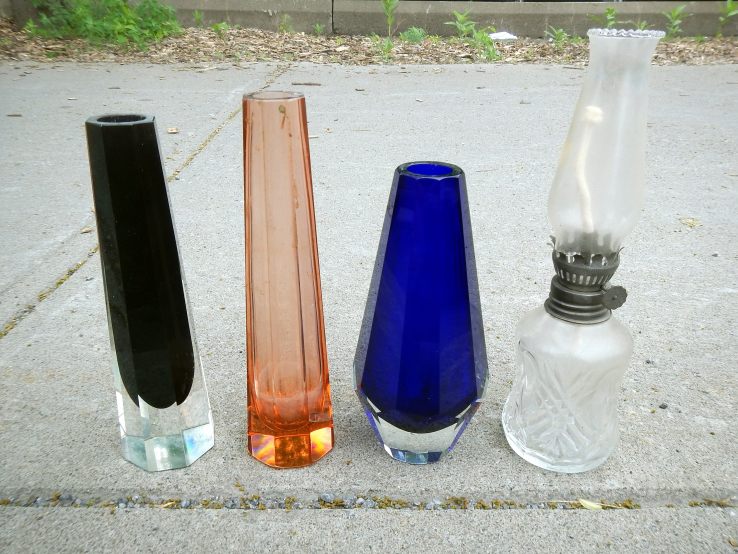 : On eBay for 55$. Another thing that’s been around a while. Found last summer in Mount Royal. (It’s the second from the right in the photo above). 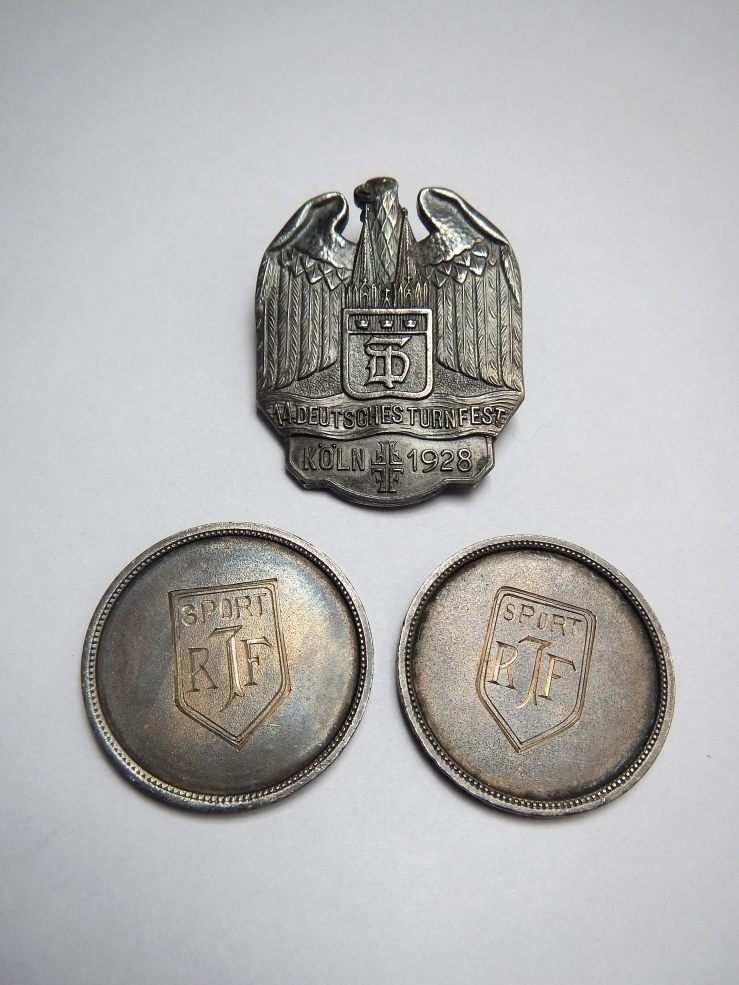 : On eBay for 15$. Found with the Nazi passport in April of last year. (It’s the piece above the two coins). 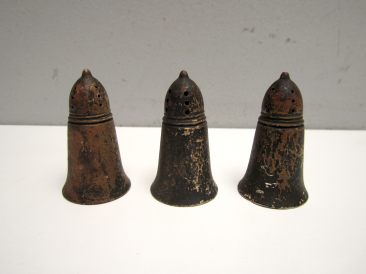 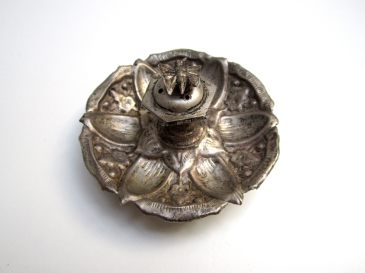 5. Scrap silver and other pieces: to a reader for 200$. This sale included the five cups and three salt shakers from the enigmatic dumpster, as well as some silver dimes (Snowdon), an old silver plate vase (Plateau), and an incense burner (Cote St-Luc). From the sounds of it he may try to make new glass for the cups, which could be really nice if successful.

If you have a question, see anything that you’re interesting in buying, or to just want to say hello feel free to email me at thingsifindinthegarbage@gmail.com. I also enjoy reading your comments! Keep in mind that I frequently get behind on emails, so I apologize in advance if I take a few days or weeks to get back to you.