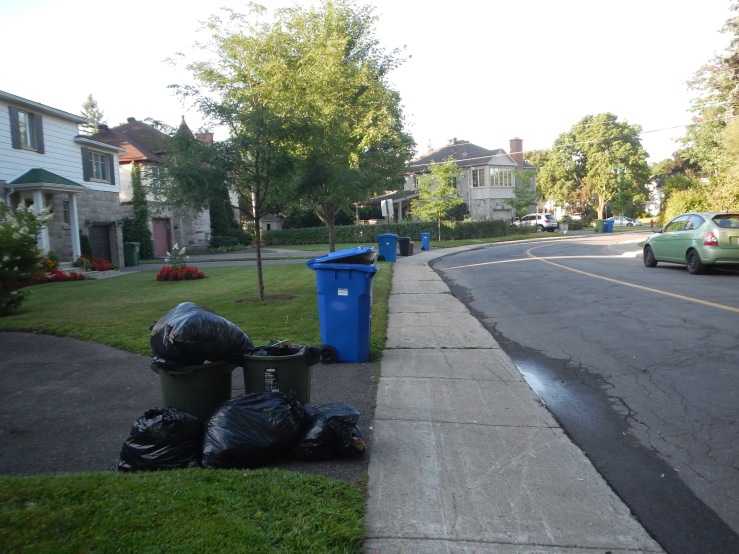 On Wednesday I went to Mount Royal and stopped at a house that’s been producing for a while – the same one that provided the WWII RCAF cap and Expo 67 ephemera not long ago.

In the middle of sorting through the recycling bin an SUV pulled up beside me. I turn around and saw a neighbourhood security guard who I’m sure was the same guy that told me to leave the area way back in October. I’ve since had contact with other security officers in the area but none that has given me any real trouble. This time around he took my name and address, gave me a warning and told me I’d face a 219$ fine if caught again, all the while acting fairly belligerently.

I left but came back around a bit later to finish the job. I’d rather risk a 219$ fine than miss out on an amazing trash pile. Inside the bin was a treasure trove of old newspapers, photos, and other ephemera, much of was related to World Wars I and II. It seems that the family previously living in this house had a extensive military background. This stop was definitely one of my finest as a trash picker, and much of the best stuff came after I returned for the second time.

It’s annoying that I could be fined for picking in Mount Royal going forward. It’s one of my favourite routes due to its beauty and interesting history. Regardless, I doubt this will keep me from going and if fined I may elect to fight it in the courts. I’d be curious to know what by-law mentions trash picking. I should have asked him!

On the other hand that security guy might be my good luck charm! I found great stuff last time I talked to him as well, including a collection of newspapers from the end of WWII.

This atlas, published in 1913 is cool in its own right…

However, it’s what was stashed between its front and back covers that was particularly interesting. There were many old, mostly pictorial sections of newspapers, older than I’ve ever found before. They cover many different topics including: the Hindenburg disaster, the coronation of King George VI, the 1939 Royal Visit, the 1923 Great Kantō earthquake, various post-war celebrations, and the building (and collapse) of the Quebec Bridge in 1916. There were also newspaper clippings mostly related to the WWI.

It’s an amazing collection and many of the papers are in really good condition. They’ve likely been stored in that book for quite some time. I had never heard of the Montreal Standard before. It was apparently a pictorial newspaper published between 1905 and 1951.

(Just to note: you can click these thumbnails below for a better view. You can also get an even closer look if you go to the bottom right of the popped-up image and click “view full-size.”) 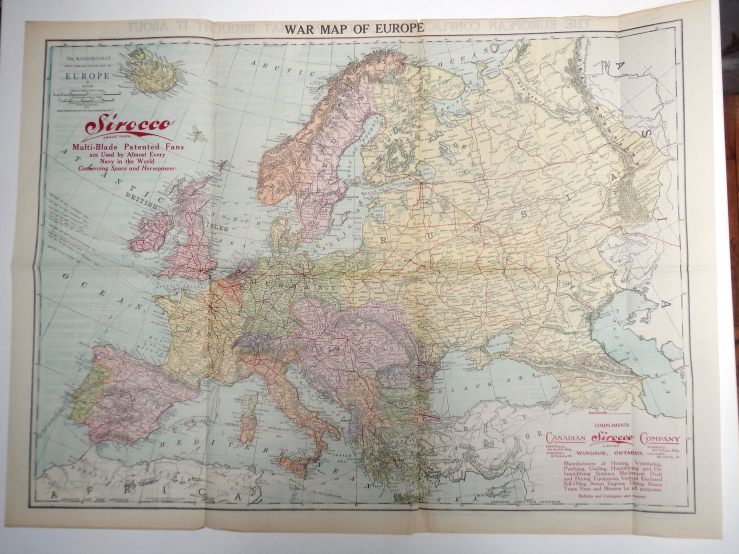 I’ve always been a bit of a map nerd so this piece is one of my favourites. It’s a (WWI) War Map of Europe published in 1914 by Rand-McNally and given out compliments of Canadian Sirocco Company. They apparently made fans and blowers way back in the day, so long ago that it’s hard to find any information about them on Google. I can’t find a single mention of another map like this one. It’s a great piece that would look really good framed.

These photos were found in the middle of a scrapbook mostly full of newspaper clippings and military-related ephemera. Two are group shots labelled “Uplands 24/4/44.” Uplands likely refers to the former RCAF training school at Uplands just south of Ottawa. Many airmen were trained here before being sent to fight in Europe. These photos are amazing, particularly the shots of the planes in flight which don’t seem to be very common. Some great history right here!

I also enjoyed finding these two WWII-era RCAF Christmas cards, both of which were apparently never used. The design of the one on the right is especially cool – the logo is printed with some kind of blue, fuzzy fabric while the inside features a great drawing and typography so typical of the era.

There’s still enough neat stuff to warrant another post! It may take time though as I began the second part of a regular temp job today. It involves re-delivering stored boxes to students returning from summer vacation. It’ll keep me busy for the next couple of weeks, but I’ll probably be able to post and will definitely have the time for a few trash runs.

10 thoughts on “My belligerent lucky charm”