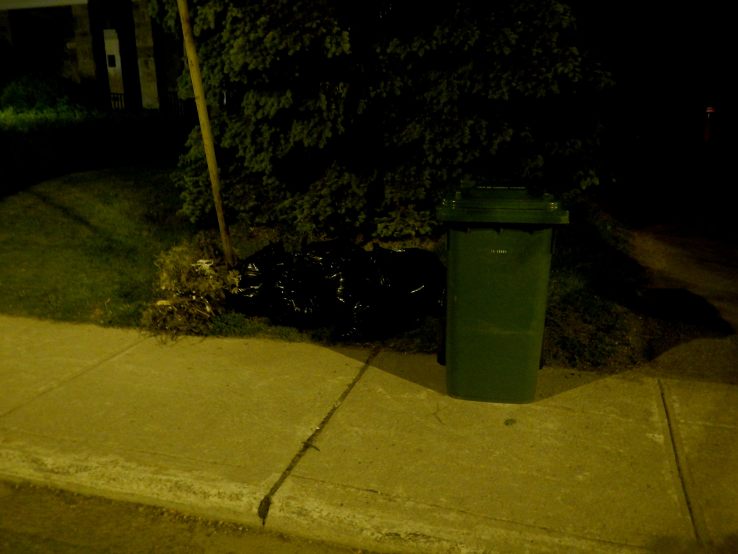 This house in CDN has been my only real source of garbage the past couple of weeks. It’s definitely one of the most productive places I’ve ever come across, providing me excellent and interesting things for nearly two months now. At some point the reservoir will be exhausted but for now I’ll enjoy the ride as it lasts.

Here’s some things I collected here over the past two trash days.

This is an old “Susy Goose” Barbie doll closet. Inside are little clothes hangers, drawers (which contain miscellaneous clothes items – including a pair of diving fins), and a foil mirror. It’s in pretty good overall condition and should make me around 20-25 bucks. 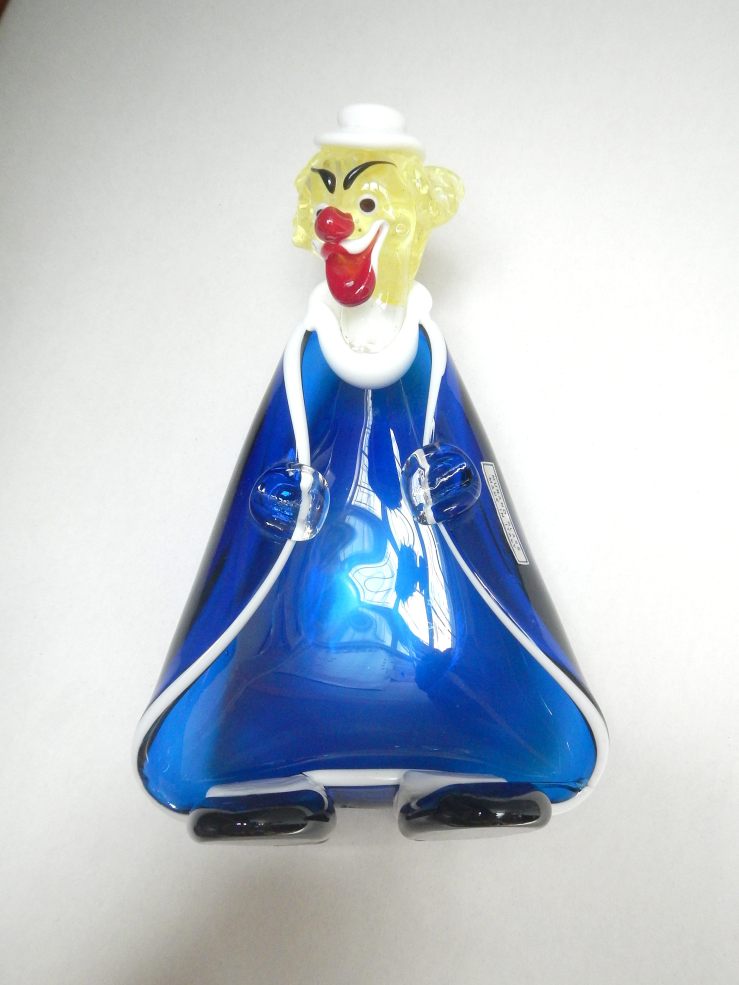 A couple pieces had broken off this Murano glass ashtray but I managed to glue them back on. It looks pretty good after the repair but the imperfections reduce its value. This near perfect example sold on Ebay for around 55$ (28$ plus 27 for shipping). I’ll try to get 10$ for mine at a yard sale. 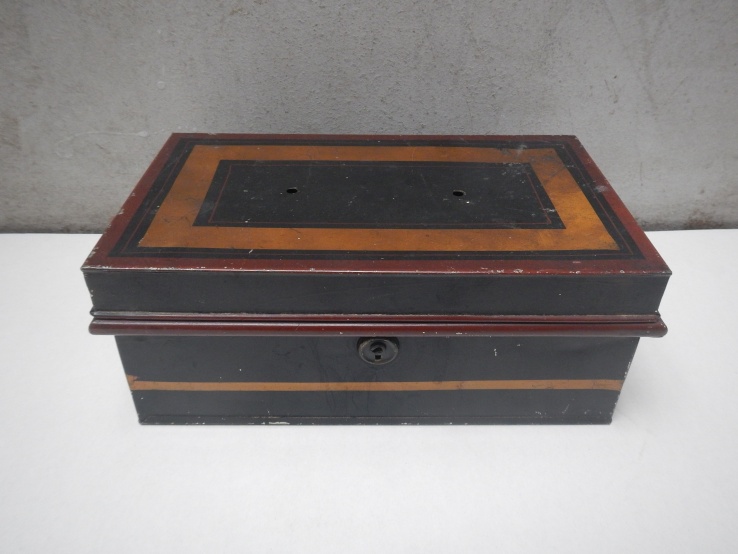 I like this old metal box. It would easily sell at a yard sale but I’ll probably keep it myself. 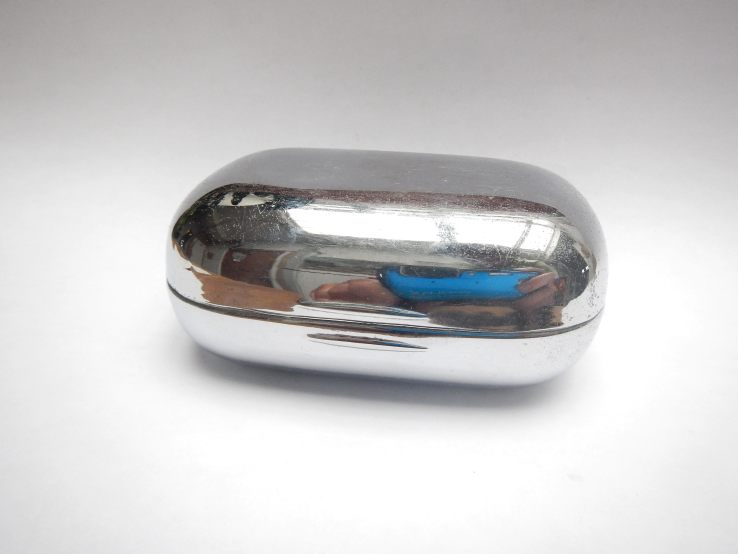 Another little metal container, this time with a chrome finish. 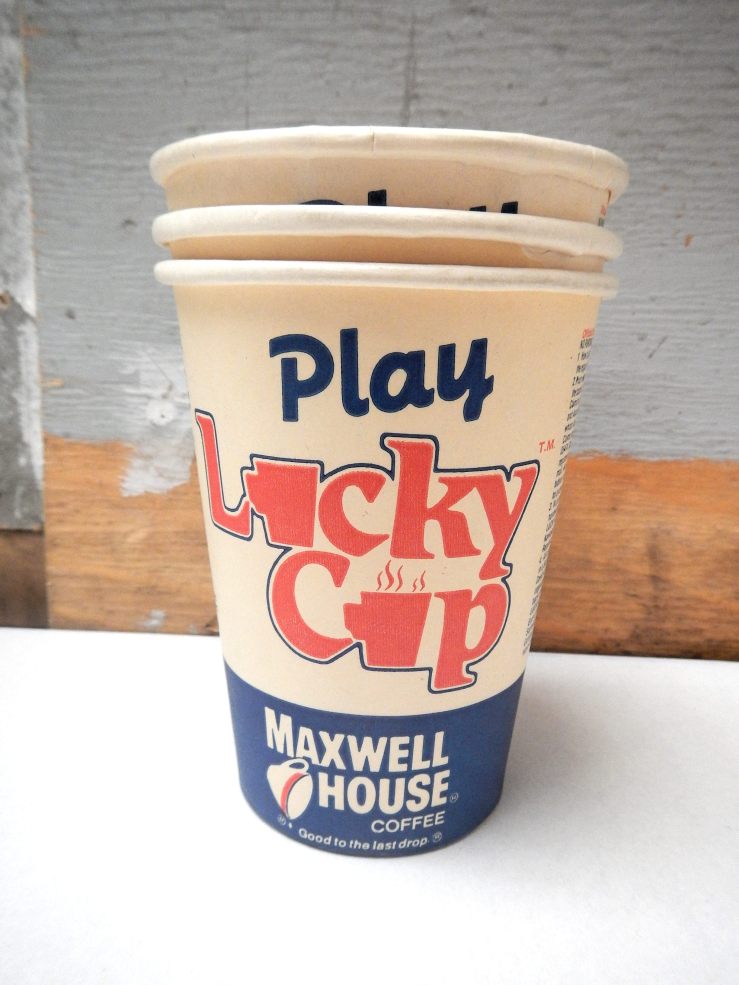 These disposable coffee cups were part of a 1980s “Lucky Cup” promotion by Maxwell House. I couldn’t find any reference to them outside of the website of a marketing firm that takes credit for the idea. According to them “this was the first time a sweepstakes had been placed on a hot drink cup.” There’s nothing like them on Ebay, I wonder if a collector would give me 25 bucks for them? It’s a shot in the dark but you never know! 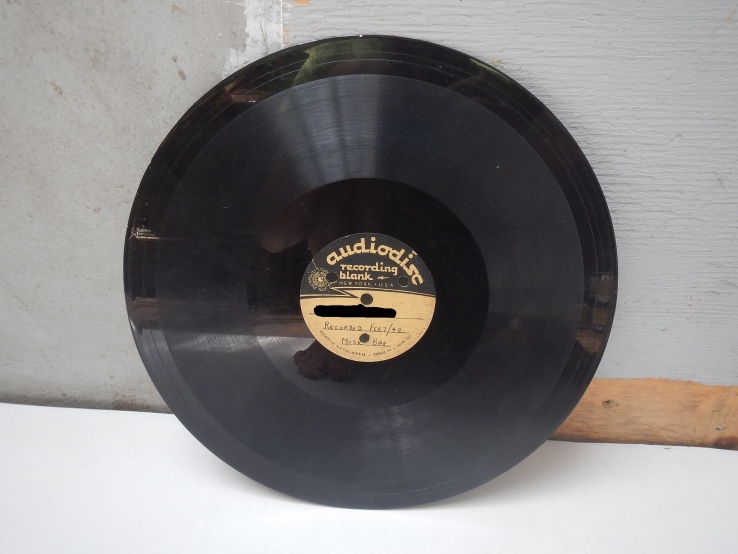 I found another one of those unique record pressings. On the label is written a name and that it was recorded on February 7th, 1948 at a “Music Bar.” There are some scratches that might make it hard to play but I hope to get it digitized sometime this summer. 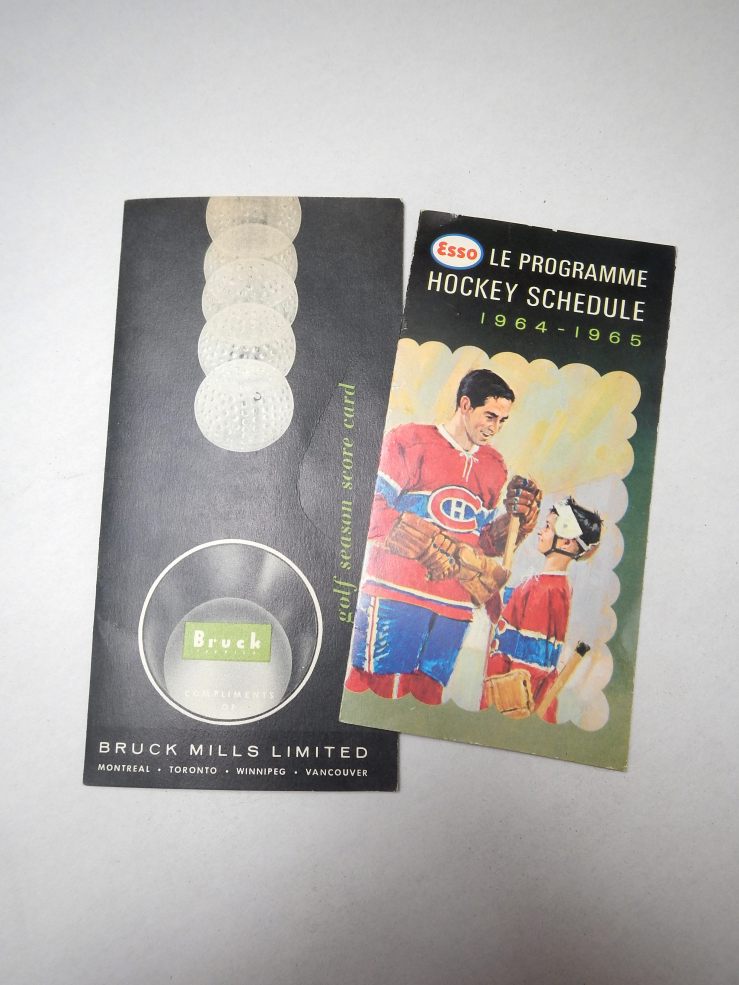 On the right is a NHL schedule published by Esso for the 1964-1965 season. That was way back when there were only six NHL teams – bit took me a while to figure out why there were so few games! It’s in excellent condition, someone wrote the scores next to some of the games on the inside but a collector might enjoy that. There’s a guy on Ebay trying to sell one just like it for 110$ and there’s another one up for 65$. I think I’ll put mine up for 60 in hopes that I can sell it relatively quickly. I also don’t think 110$ is a realistic price. 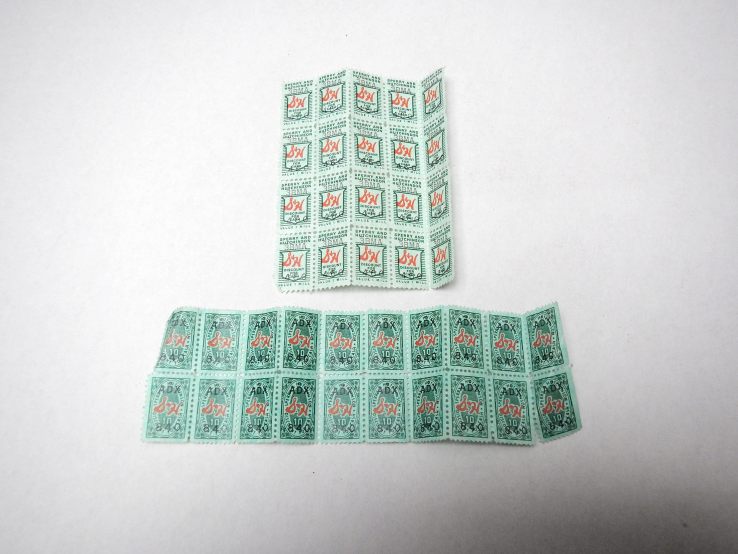 These are old S&H green stamps, part of a popular rewards program that existed in the US from the 30s to 80s. They’re not really valuable but are a cool addition to a yard sale. I’m sure a lot of people remember them. 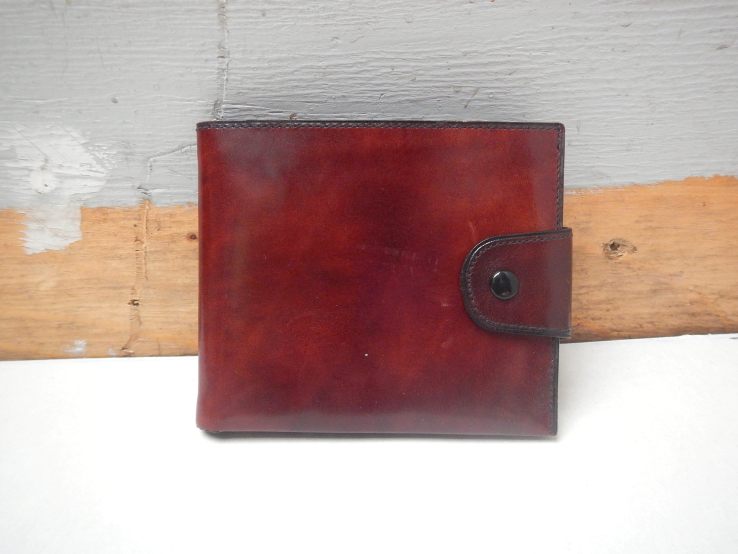 A brand new red leather wallet. I think I’ll use it after my current wallet gets worn out. 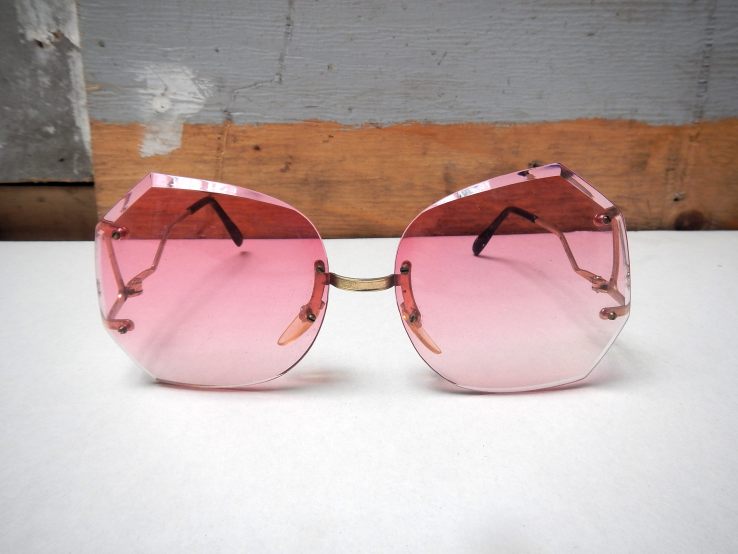 A cool, if not particularly fancy (Made in Hong Kong) pair of vintage sunglasses. 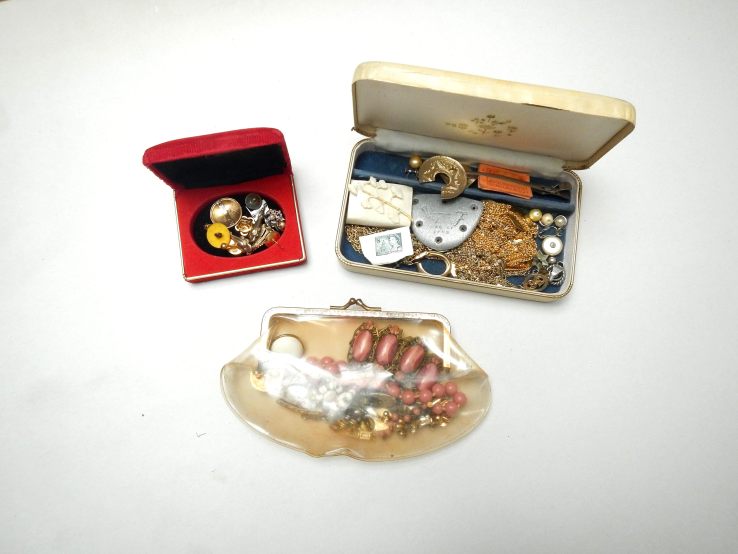 There was a bunch of jewellery here on Tuesday. Some pieces were broken or only good for parts but others were quite nice. 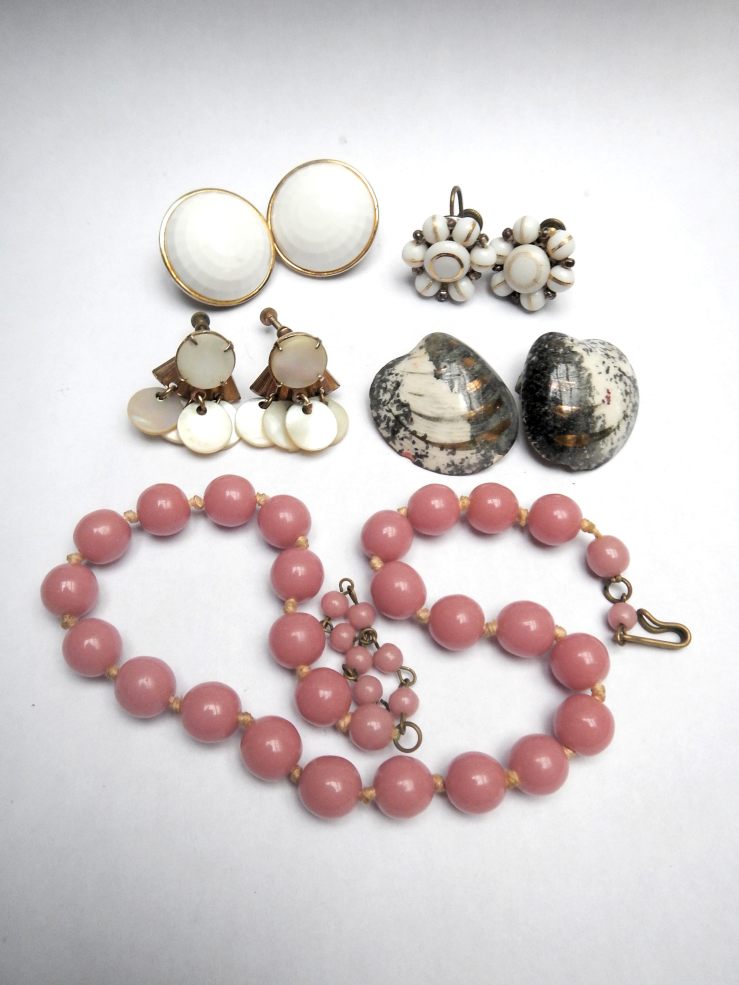 These costume jewellery earrings will make me some money at a yard sale. The pair at top left were made by Monet, a fairly popular brand. The beads of the necklace seems to be made of glass. 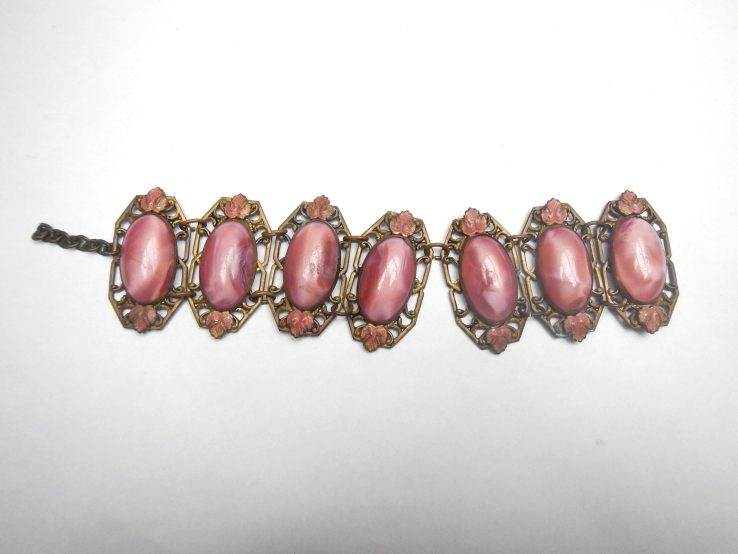 This bracelet needs some love (one missing link, no clasp, some green tarnish on the metal) but is still very beautiful. I’ll try to find some parts to match it. 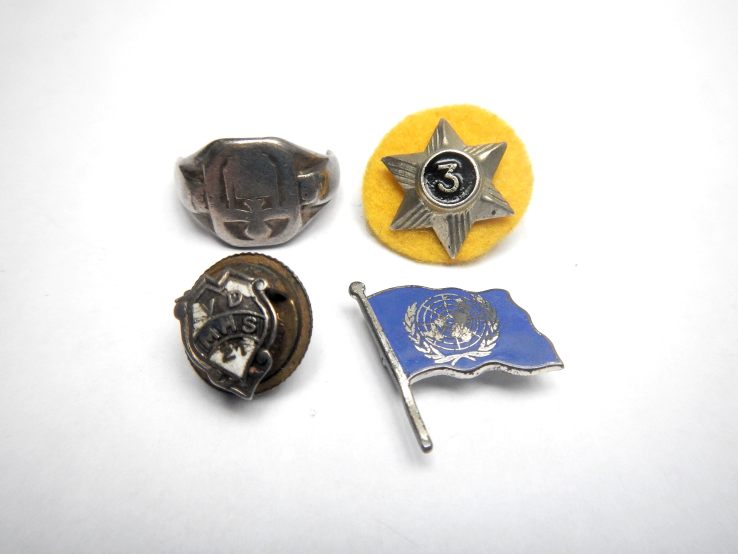 There were a bunch of pins and other baubles. The two at bottom are sterling silver while the ring at top left looks to be silver as well. The ring’s “arms” don’t extend as far as usual, it doesn’t seem like it’s broken but it’s a challenge getting it to stay on my finger. 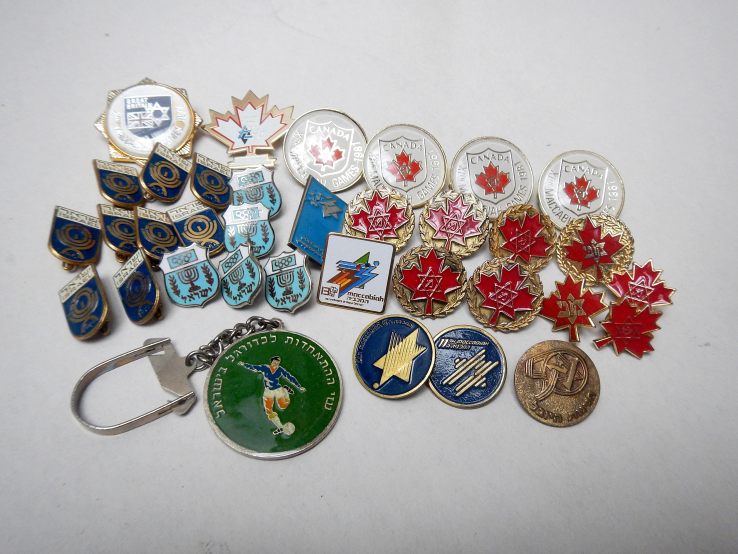 There was also a collection of Hebrew pins. Some are related to the Maccabiah Games, an event held in Israel that Wikipedia describes as the “Jewish Olympics.” Others have the Olympic symbol on them. I’m going to try putting these on Ebay as a lot. 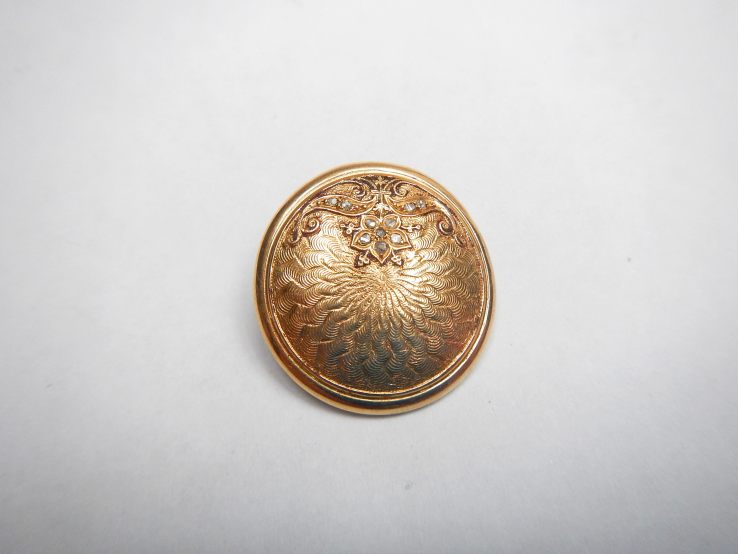 This piece marked 750 (18k gold) is a brooch with a missing pin. I think the rocks at the top could be little diamonds. It’s valuable even just as scrap but I wonder if I could make it into a pendant. 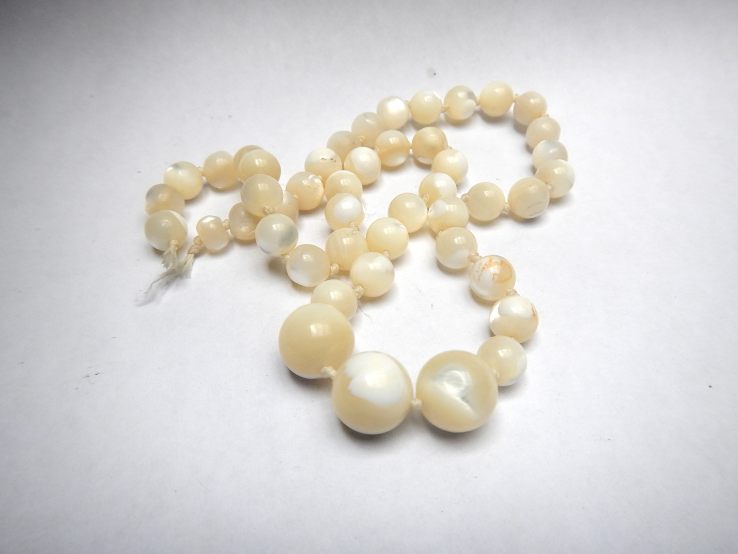 These beads have a beautiful lustre and a sort of marbled tone. I think they’re pearls because none of them are perfectly round and they also passed the “friction test”. I supposed they could be polished stone or marbled glass as well, what do you think? 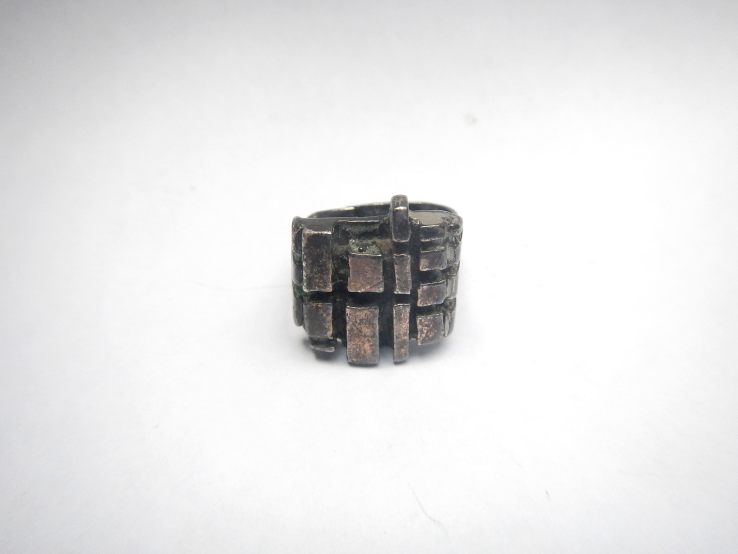 I thought this modernist style ring (marked 900 silver) was pretty cool. One of the arms is a little cracked but it works fine for now, though I’d want to repair that somehow before selling it. I’d also be happy keeping it myself!

–Gold-filled watch in need of repair – 15$ (to a reader), found in Plateau April 15th
-2 “Banzai” Metallica Cassettes (early Canadian printings) – 38$ (Ebay), found in Rosemont as part of larger collection but not featured. The collection was in front of the same place as these great bike locks and the bike seats from last week
-Yard Sale – Many different things added up to 135$
Total: 188$, 338$ since I began keeping better track (May 18).

Another passable if unspectacular week. I hope to have another yard sale this weekend, if so I should post some bigger numbers soon. I also plan on scheduling my work a bit better so I get more things listed online.

I plan on going back to this spot (and NDG, CDN, Westmount) tomorrow (if not later tonight). I’ll let you know if I find anything more!