A big storm rolled through town yesterday bringing 20cm of snow, gusting winds and bitter cold. Fortunately for me the storm arrived after my trip to the Town of Mount Royal. It was an interesting day, featuring a few things I had never seen before and a person asking me to not look through his trash.

This garbage belonged to a dentist that has been tossing occasionally cool items for a couple months now. I’ve come to expect to find something here every week, though it’s not always super exciting.

These people seem to have collected and spent a lot of money on art. I found three more pieces by Ludo Pollack, two of which are marked 1972. I now have 7 pieces of his art. These ones I hung up in the hallway entering my place, they spruce up the white walls that are in need of a new paint job.

This machine, a Sklar Rotary Compressor, was inside one of the bags. The glass bit is the “Suction Unit.” Apparently it has something to do with surgery and anaesthesia, though I personally have no clue how it works. I was afraid to test it out but it does turn on and make noise. There’s a couple on Ebay that were up for 55$ but neither sold. If anyone has any insights or information about this thing let us know in the comments!

The mattresses (and everything else) in this spot looked as if they had been in that garage for the last 20 years. 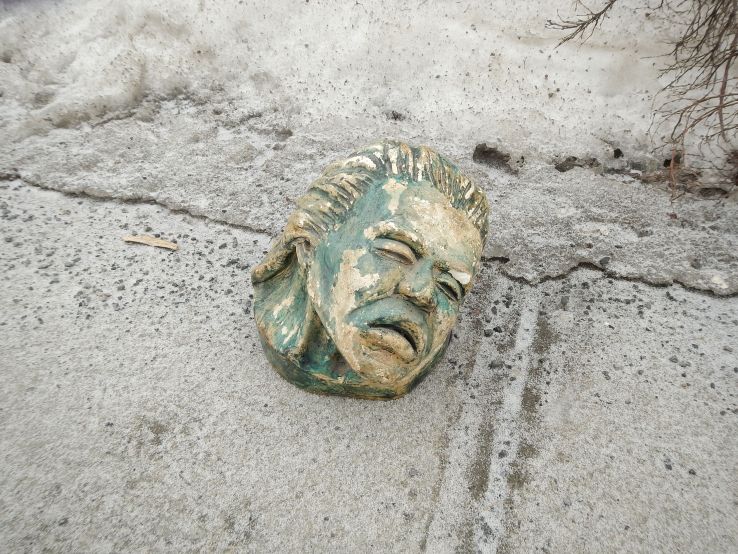 I found this bust and left it on the side of the road near my place. Maybe someone will give it a home. 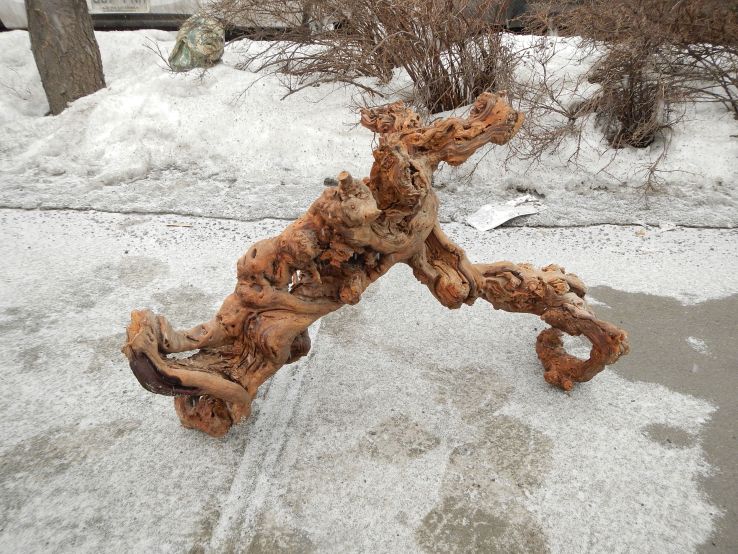 Someone added a hanger to this piece of driftwood so that it could be hung from the ceiling. It needs a good dusting but it’s pretty cool, I might keep it myself. 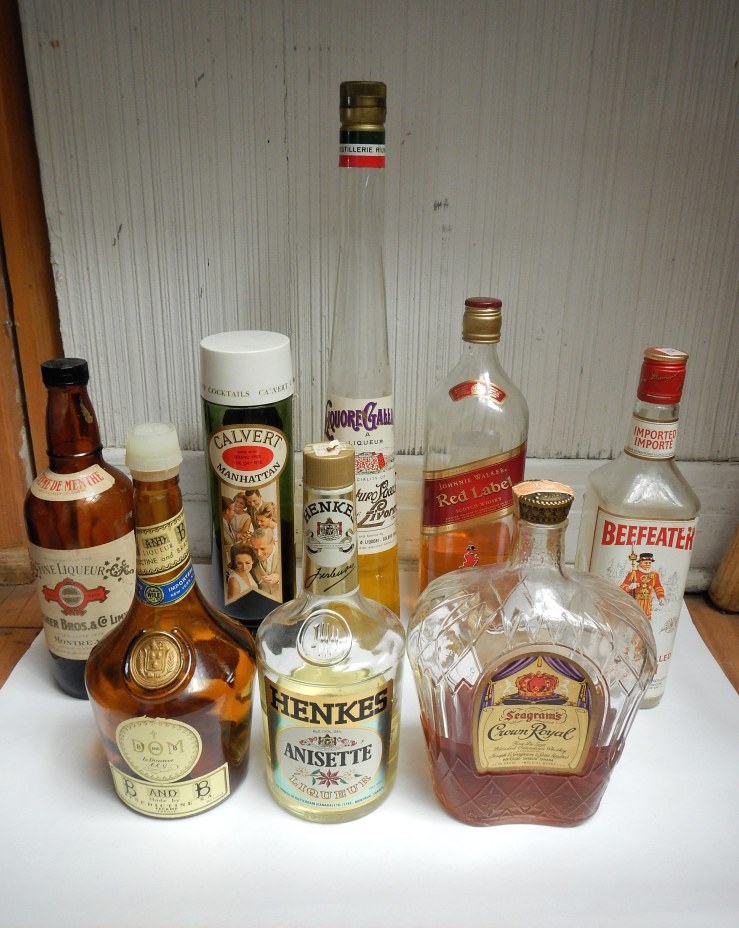 In another bag was an old liquor collection all wrapped up in paper. They’re all partly full, though nothing is more than half. Based on the labels and price tags I’d say most of these were bought in the 60s, 70s and 80s. The Johnny Walker might be a little newer because it has has a serial code. The Crown Royal on the other hand has an excise sticker with 1960 marked on it.

High proof liquor, unlike wine or beer lasts a really long time. They definitely smell pretty normal and I’m sure my room-mates and I will give them the old college try in the near future. I figured I’d ask though: would you try some?

This is the place I found the stamp collection, magazines and pamphlets last week. The bed frame looked really nice but I had no room for it.

There wasn’t much of interest this time around, though I did find a cool cowboy hat from a Wormser in San Antonio Texas. It’s made of 100% virgin wool. The size is 7 1/4 which I think is a little too small for me. I modelled it on the squid stuffed animal I found in Edmonton, it doesn’t fit it either!

I stopped here because I spied the top of a lamp poking through a bag (which you can see in the back right). I took the lamp, giving only a brief cursory glance to make sure it was worth taking. I then started looking through another one of the bags, quickly finding some more nice stuff before I was approach by a man and a woman. The man told me the items belonged to his father who had recently passed away. It was kind of confusing how it all went down but I gathered that he didn’t want me there and I left, though he seemed fine with me taking what I had already set aside. I knew what I found was great, though, and felt compelled to try again to see if I could at least talk to him more about it. I wanted to save the potential treasures from being destroyed for philosophical reasons but was also motivated by my own financial gain.

I sat in the car and thought about it for a while before going back. I couldn’t even open another bag before he came out again and asked me what I was doing. I told him I was looking for valuables. I mentioned the lamp as an example thinking it wouldn’t bring up any possible negative emotions. He told me the lamp was the only valuable thing and that the rest were papers he didn’t want me looking through. He was a bit more tense for this conversation but he was still very well composed. I’m not sure I believe that there weren’t any other valuables inside those bags, in fact I still wonder as to what might have been inside, but this time I had no choice but to leave for good. I can’t be too aggressive in one of my more productive neighbourhoods.

This is the lamp. It’s actually really nice, I just need to find it a matching lampshade. 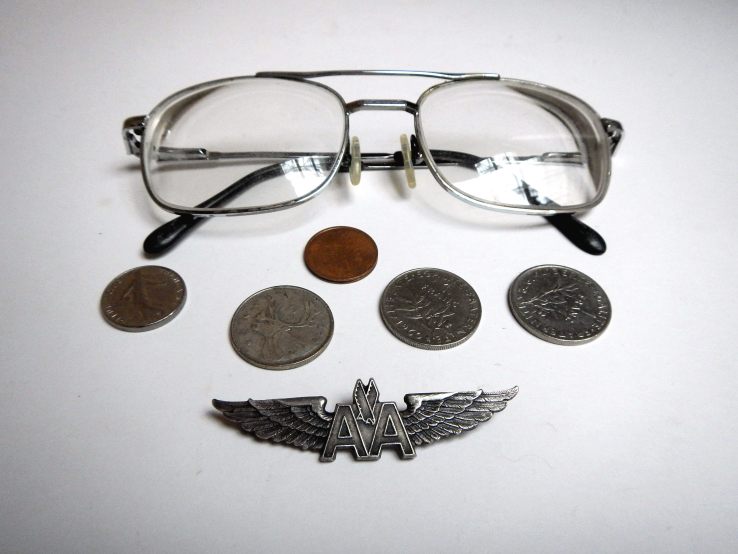 These items were in a little chequebook box. The glasses frames are made of gunmetal and the 1968 quarter is partly silver. That was the last year any silver quarters were produced.

My favourite piece are these old silver filled American Airlines “wings”. They’re very beautiful and probably would have been issued to an attendant or other employees. On Ebay there’s a set selling for 111$. I think that price might be a bit of a reach but I expect I could get 80-90$ for them. 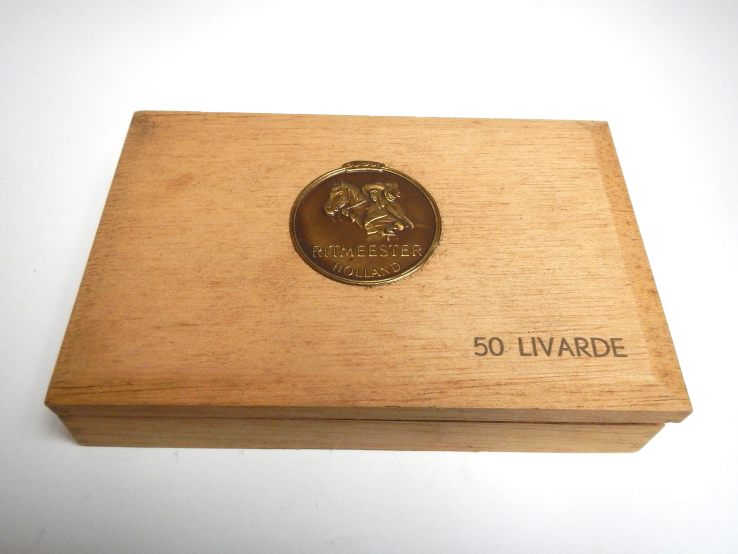 There was also a little bonus waiting for me at the bottom of the bag the lamp was in. 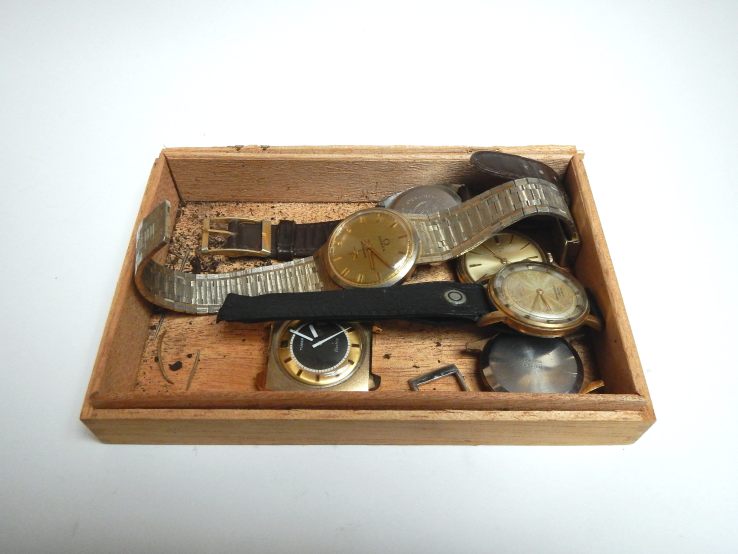 Inside an old, busted cigar box was a collection of watches. The dirt was from some geraniums that were also inside the bag (which I am now trying to save).

The watches are all fairly old and all have issues. None of the three on the left are working, though they’re probably still worth a bit of money for their parts. The one on the right (a 17 Jewel, Super Datomatic, Waterproof “Mortima”) seems to work fine but has a very scratched crystal. If I get the crystal cleaned up I should be able to sell it on Ebay for 80-100$. The other two tick but get stuck sometimes, they probably just need an expert cleaning. The Omega is almost certainly a fake, it’s marked 18k gold but I think it was just gold plated. Still, it looks nice. I might sell the non-working ones as a lot on Ebay, though I wonder if I should hit up some local shops to see if anyone will buy them locally.

Due to terrible weather I decided it was best just to take the morning off, write this post and get some of my garbage on Ebay. I hope to get out tomorrow morning to see if that section of Rosemont has anything else to offer me. I might be getting a cold though and if it gets worse I might just take the day off. Either way I’ll keep you posted!

If you are interested in buying any of the items you see on my blog I would love to hear from you! Email me at thingsifindinthegarbage@gmail.com and I’ll get back to you within a few days.