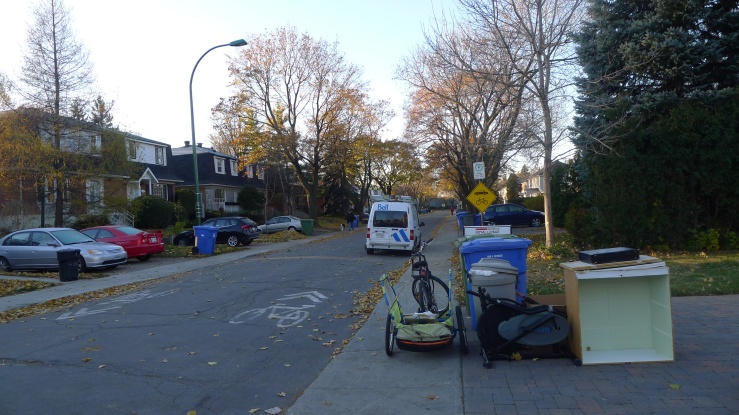 I took the last couple of days off, partly just to take some time off and partly because I’m not that excited by my early-week routes. I’m always pumped for my Wednesday morning trip to TMR, however, and I woke up bright and early to go see what I could find. It was pretty cold but I bundled up well.

I started finding things right away. This pile was in front of the first house on my path. This street is often cleared by the time I get there, but today I left a little earlier than usual and made it before the trucks came. 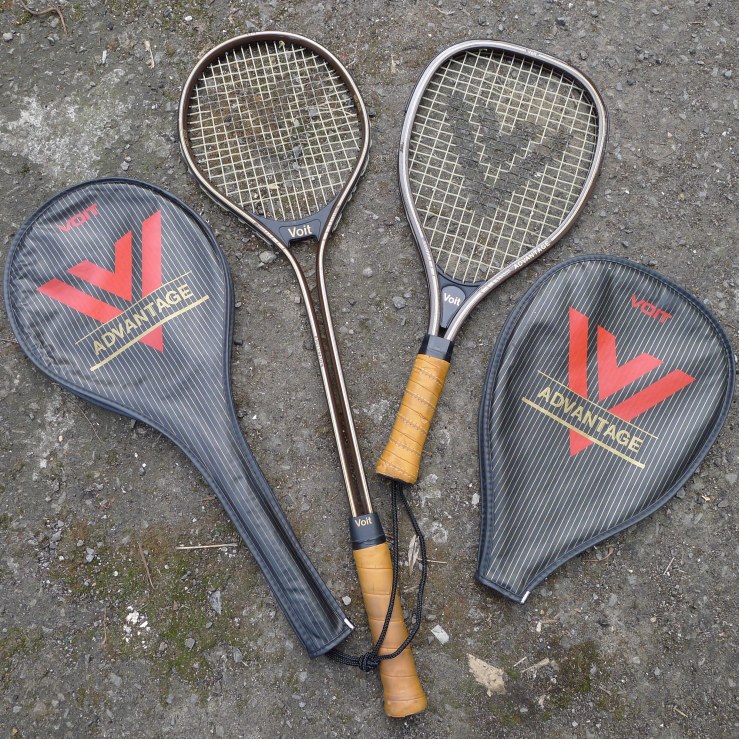 Amongst the stuff I found a couple of racquets, both of which were labelled “Voit Advantage.” I couldn’t find many references to them online, though I did see an old Kijiji ad which was selling one for 40$. 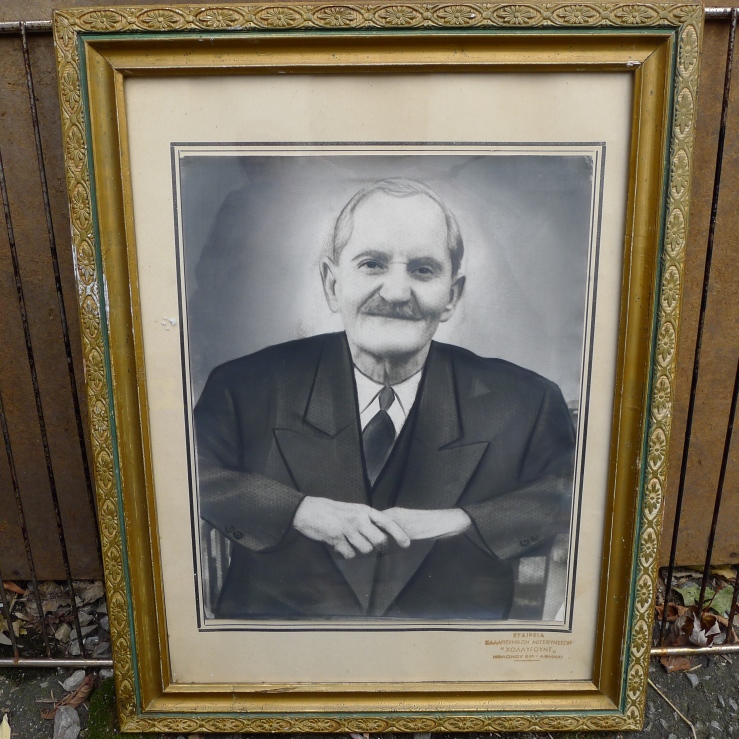 There were also a couple of portraits, both done in this odd style where someone appears to have drawn over a photograph. There’s some kind of Cyrillic script on the bottom left. If anyone can read it let us know, perhaps we can figure out where exactly it came from!

I thought this religious wall hanging was pretty interesting. It also features a lot of Cyrillic. It’s quite large too, measuring around 2 feet wide and 1 foot tall. It’d bet on it being made in the 1960s. 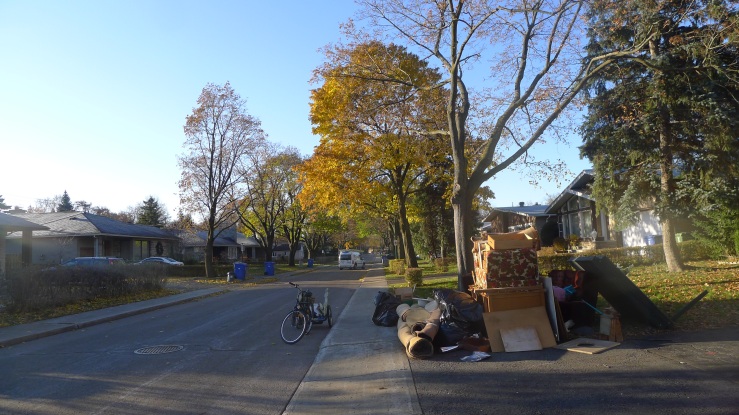 I came across this tall pile not too far away. To me it looked like the contents of a forgotten room in a finished basement that someone was preparing to renovate – carpeting, a few pieces of old furniture and a ping pong table. The ping pong table was actually quite nice and very vintage (it can be seen on the far right of the picture), unfortunately it was way too big and heavy for me to consider taking.

There was also an old V8 box full of little pieces of fur. There were no complete pieces but I’m sure someone can recycle these and make them into something nice.

Later on I came across this stuff lying in front of a house for sale.

One of the bags had some decent stuff inside, including a nice incense holder and a pair of Gucci glasses. Gucci is a valuable brand name but the frames are a bit scratched up, they’re probably not worth much as a result. Regardless, they’re still good prescription glasses.

The three busted cell phones are what really made my day, though. Two of the three are Blackberry Bolds, the same model as my cell phone which died a couple of weeks ago. I had planned on bringing my phone to the shop, thinking and hoping that all I needed was a new battery to get it up and running again. That won’t be necessary, though, as I swapped the battery from one of these into mine and now my phone works great! This find was excellent timing, really – I probably saved around 30-40$ and no longer have to use the old, crappy backup flip phone. I should be able to sell these phones on Ebay for their parts as well – if I sell them as a lot I should be able to make around 20-25$. 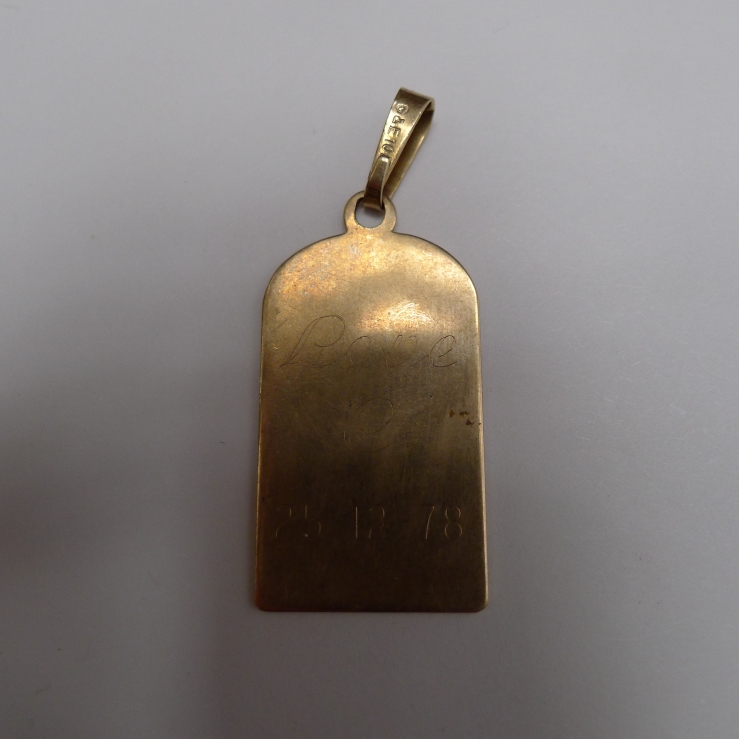 I also found this little 10k gold pendant. It looks to have been made to celebrate an anniversary. I don’t have my scale handy but I’d say it weighs around 2 grams, making it worth around 35$ in weight value. I have a decent collection of scrap gold now, I’d like to sell it off but I want the price of gold to go up a bit first.

I came across this spot on one of my last streets. There were some renovation materials but also some old things that had probably been left in a garage or basement for years and years. 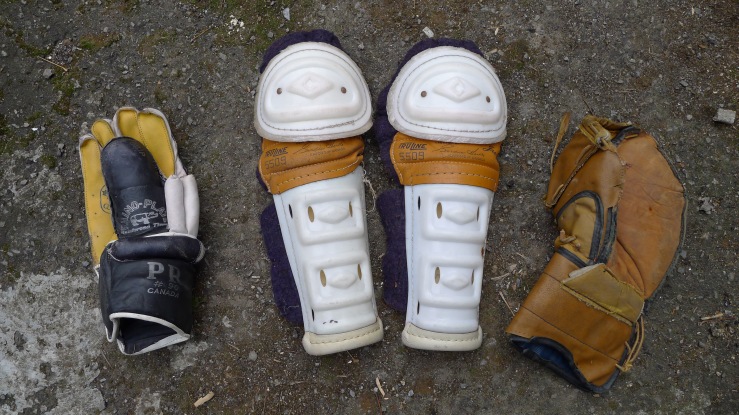 There was a bit of old hockey gear. The shin pads, featuring the signature of Gordie Howe and made by Eaton’s are quite nice. Someone is trying to sell something similar on Ebay for 40$.

In one of the bags was another bag holding a number of stuffed animals. Some look fairly old while others appear more modern. My favourites are the llama hand puppet on the bottom left (marked “handmade in Peru” on the inside) and the plaid owl on the right (even though it needs a little love). They’re all very nice, though. 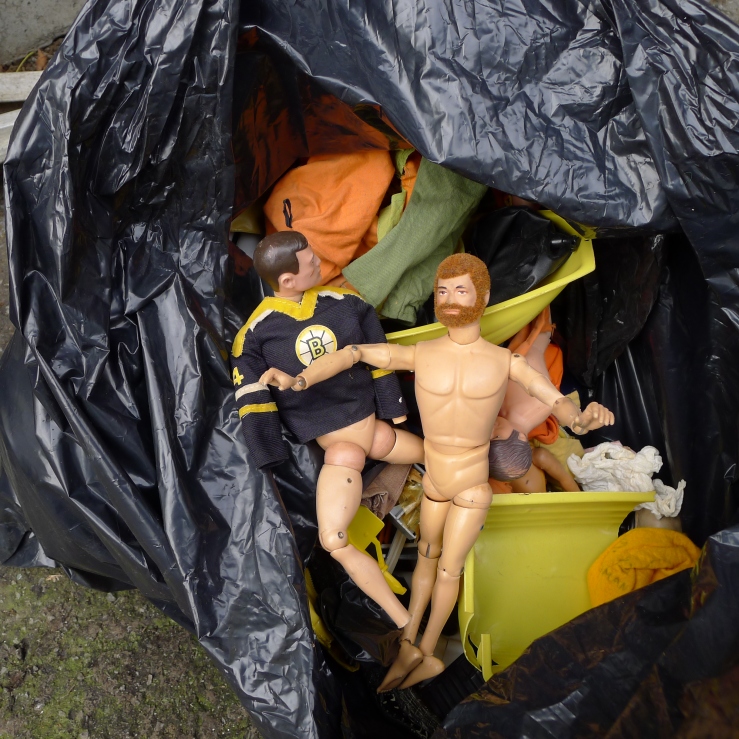 Three of the bags in the pile were just full of old toys. Many of them were busted or in poor condition and not worth taking. One bag caught my eye, however, and I threw the whole thing on my bike trailer. It contained a bunch of vintage GI Joe toys. Both soldiers in this picture were marked as being made in 1964 (though the one on the left is British made, I can’t remember what the brand was however).

By the time I got back to base I was too tired to sort through this bag, it’ll have to wait a bit before I figure out exactly what’s inside. Old GI Joe stuff can be worth good money, though, so hopefully it’s a nice little collection. I’ll let you know if there’s anything special.

I came back with quite the haul! You might also notice that I have two bike trailers. That’s not a usual thing, I found a second one somewhere in the middle of my route. It has a couple of flat tires but still runs pretty smoothly. It’s made more for kids but it can carry a good load of garbage as well. The one I’m using is on loan so this one might come in pretty handy somewhere down the line.

These six beer were in a 24 box next to the trailer. Sometimes people leave tips for the garbage collectors but I don’t think this was the case here – the only visible bottles were empty. It might be skunky, who knows, but I’m sure someone will drink it, even if it’s not me.

This morning’s run was quite productive. Not only was I able to fix my cell phone but I also made some interesting and valuable finds. Hopefully tomorrow morning’s run through Rosemont is equally successful.

In other news I’ve been spending more time putting things up on Ebay and Craigslist. I recently sold the mottled blue porcelain light fixture I found in Outremont a couple weeks back for 40$ while also selling a pair of non-functioning Smith Empire pocketwatches for 35$ on Ebay.

The last couple of days I’ve been putting most of my effort into Ebaying the great 50s ephemera I found in TMR a couple of months back. It should make me some nice cash – people seem to pay good money for 50s ephemera and everything is in excellent condition.

I noticed this signature at the top of one of the bullfighting magazines while sorting through the papers. I wanted to at least try to identify it before putting it for sale – signatures can definitely add significant value to a piece of ephemera.

I decided to post a picture of the signature on the “What is this thing” messageboard on Reddit. After a couple of days someone posted to say that they thought the signature might be that of Gilbert Roland. Roland is probably best known as being the only Mexican-born actor to play the role of the Cisco Kid, the main character in a series of western movies most popular from the 1930s to early 1950s.

In short, it’s definitely not improbable that Roland could have been the one to sign this magazine. The ephemera I found is all from Tijuana, a city not particularly far from Los Angeles or Juarez. It’s from 1958, a time when Roland would have still been a prominent film star. He also clearly possessed a certain passion for bullfighting.

Regardless, here’s the example the person on the messageboard posted as a comparison. It’s looks pretty similar to me, what do you think?

I’m not sure Roland’s signature is super valuable but it definitely bumps up the value of the magazine. Either way, it’s been pretty fun (probably) solving this puzzle!

18 thoughts on “The Cisco Kid”