I went out to TMR this morning and came out with a pretty good haul. I travelled by bike, unlike the last few weeks when I went with a friend by car, and brought along my bike trailer. A friend also came along and helped carry some stuff. At one point a security guard stopped me and told me garbage picking was forbidden and to leave TMR. I felt disobedient, paying him lip service and continuing on my route. I didn’t think there was any truth to the claim and felt ready to discuss it with the real police if necessary. Regardless, we didn’t cross paths again.

I came across this pile midway through my journey. It sat in front of a recently sold house. In my trailer you can see a somewhat busted learner’s guitar I had found a bit earlier. It’s a piece of junk but it’s fun to play around with.

I pulled this odd wooden box by Kindermann and Co out of one of the bags. Inside are a couple of light fixtures. I didn’t find any reference to this online so I was hoping you could help me figure out what it is! Another picture is in the thumbnail below. 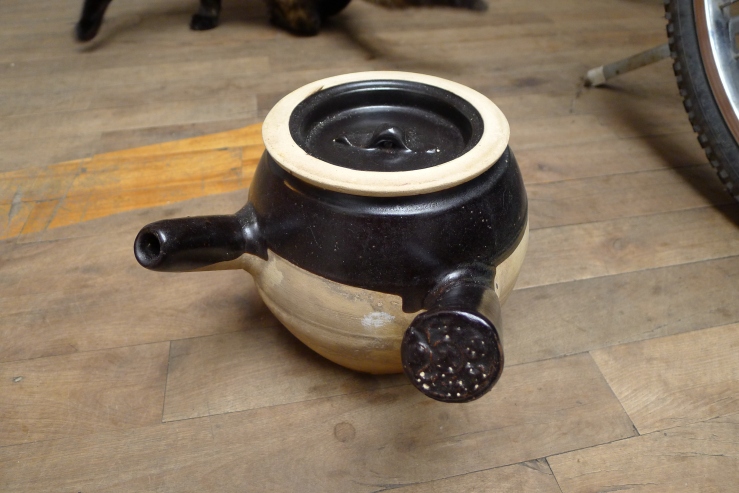 I also found two of these teapots (?). The design is pretty unique, I’m thinking it might actually work pretty well. I kept one and left one where someone else might find it. 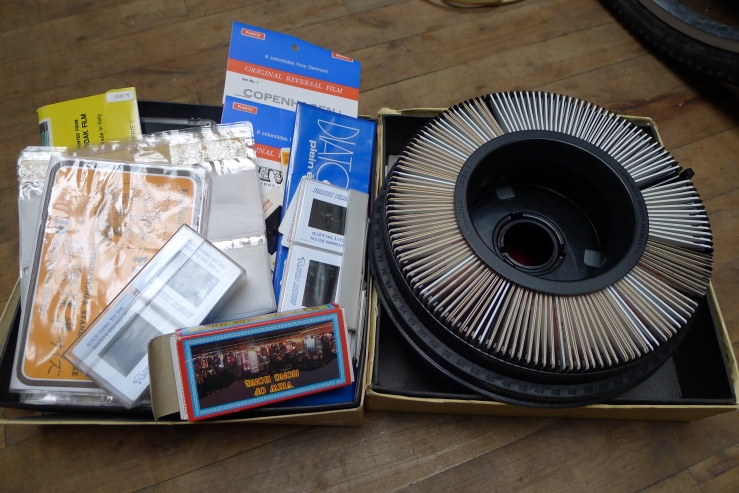 The bags also contained a number of slides. The photos are not unique, they’re the kind you’d buy at souvenir shops back in the day. I thought it was pretty silly to buy slides that everyone would have. However, these were the pre-internet days and I could see serving as good memorabilia for someone who doesn’t like taking photos.

These slides are useless for my photography project but I bet someone might have an interest in them. Maybe I’ll put them up for free on craigslist.

My best finds, however, came from this spot. I wish I remembered where it was (I always lose my bearing in TMR due to its winding streets), all I know is that it was around the north-west of the neighborhood. 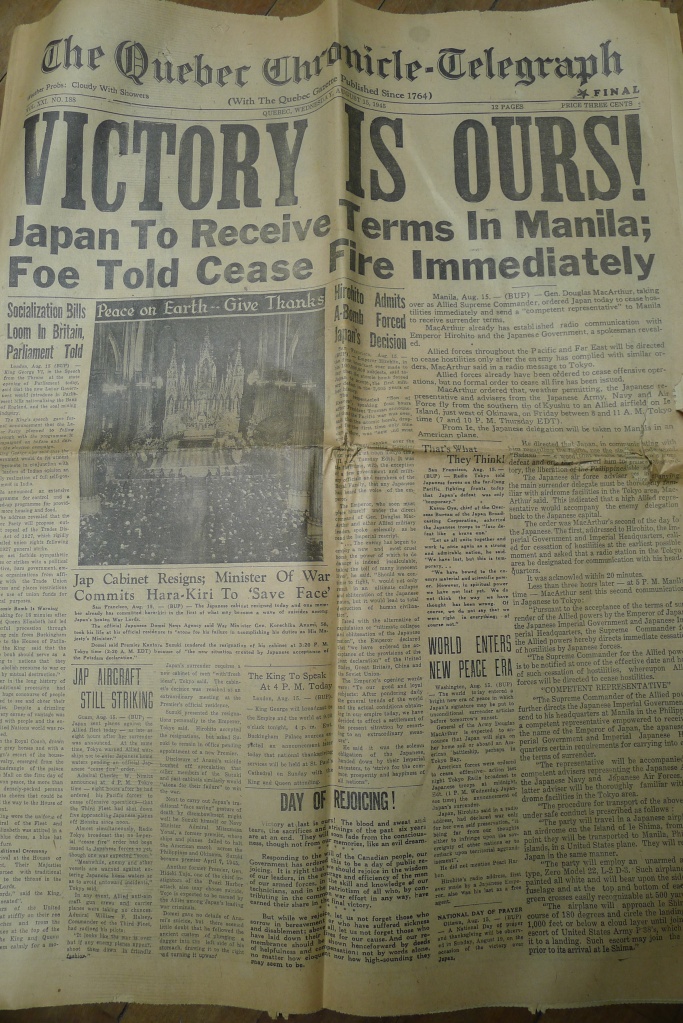 Inside the boxes were a bunch of old newspapers, most of which were published at the end of WWII. These are really interesting to look at. One thing I noted were the massive, beautiful ads specially designed for the end of the war. If this were to happen today I’d think of it as corporate pandering but I think these ads are a genuine expression of happiness. They are a symbol of exactly how mobilized the entire country (and world) was for this war.

Another thing I noted were headlines proclaiming “peace for our time,” an optimism which looks pretty naive with retrospection.

There’s also three Hebrew papers (1941, 1942, 1958) and two other incomplete English papers, one of which was published at the end of Expo 67. I think the fact that Expo 67 made it into this small collection goes to show how important the event was to Montreal. Check out the pictures in the gallery below.

There were lots of old photos, some of which I took. This one, featuring a speaker at a B’nai Brith (a Jewish Volunteer organization) lodge stuck out for whatever reason. I had the feeling that the speaker might be famous, though it’s quite likely that he’s not.

I like this old portrait. It was printed on some kind of metal (or perhaps plastic) by a Columbia Portraits Co out of Chicago. 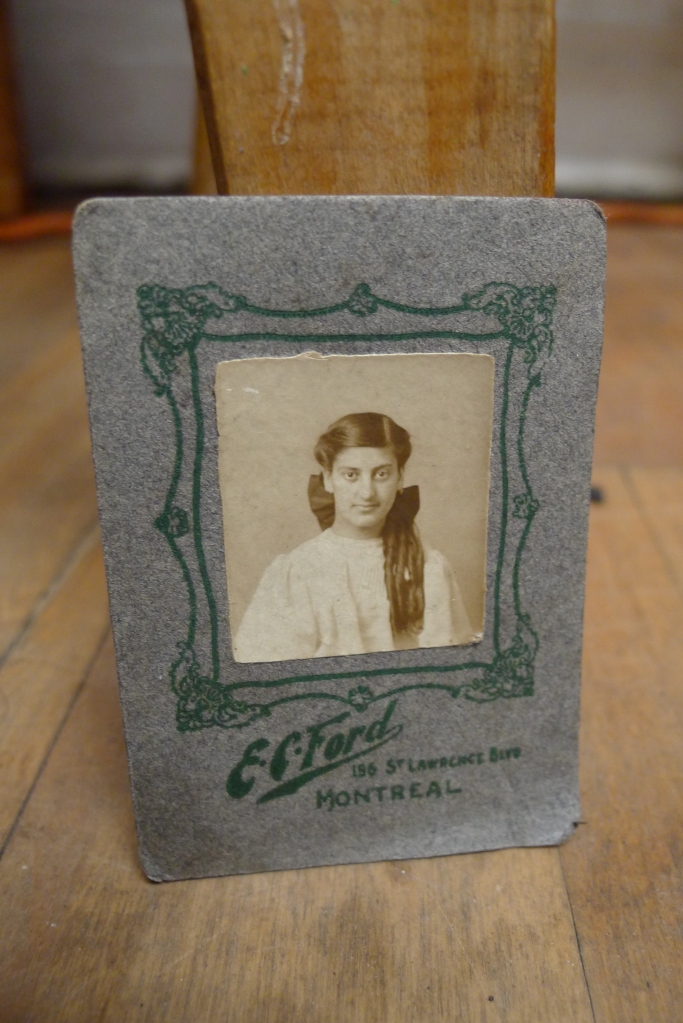 Another old photo. It looks to be the same person. There’s a bunch of Hebrew writing on the back. 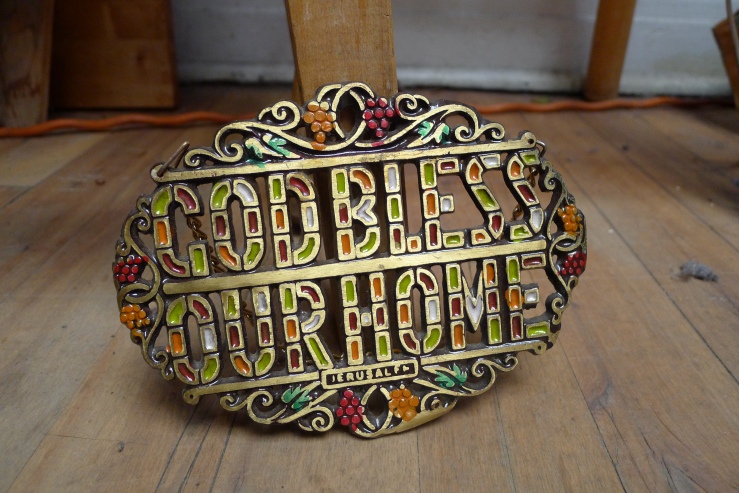 This is the Jewish version of the kind of trinkets my Grandpa used to like so much. It’s actually a pretty nice design.

I just posted photos of an old 1960s yearbook in my last post. Here’s another one, a 1962 yearbook from Quebec High School in Quebec City. The teachers here were “normal,” not nuns like at the last school. I’m going to poke through this a bit later, but it’s always fun to read through the old student profiles. A few of those are in the thumbnail below. 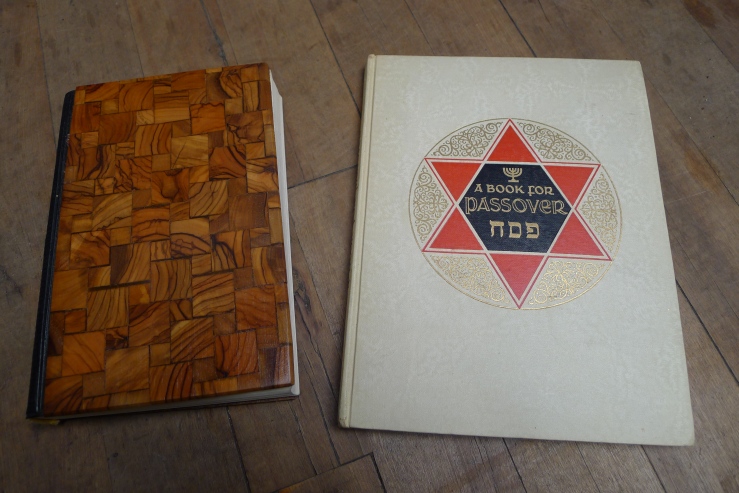 Here’s a 1967 wood-covered copy of the Tora and a 1937 kids book about Passover. Both are in good shape, the Passover book remarkably so. I realize now that I displayed the Tora the wrong way, Hebrew texts are printed in the opposite direction.

These are old coin banks. The left is made by Regal Toys and is made out of plastic. The other is porcelain but I don’t see any makers marks. As clowns go this one’s pretty charming. 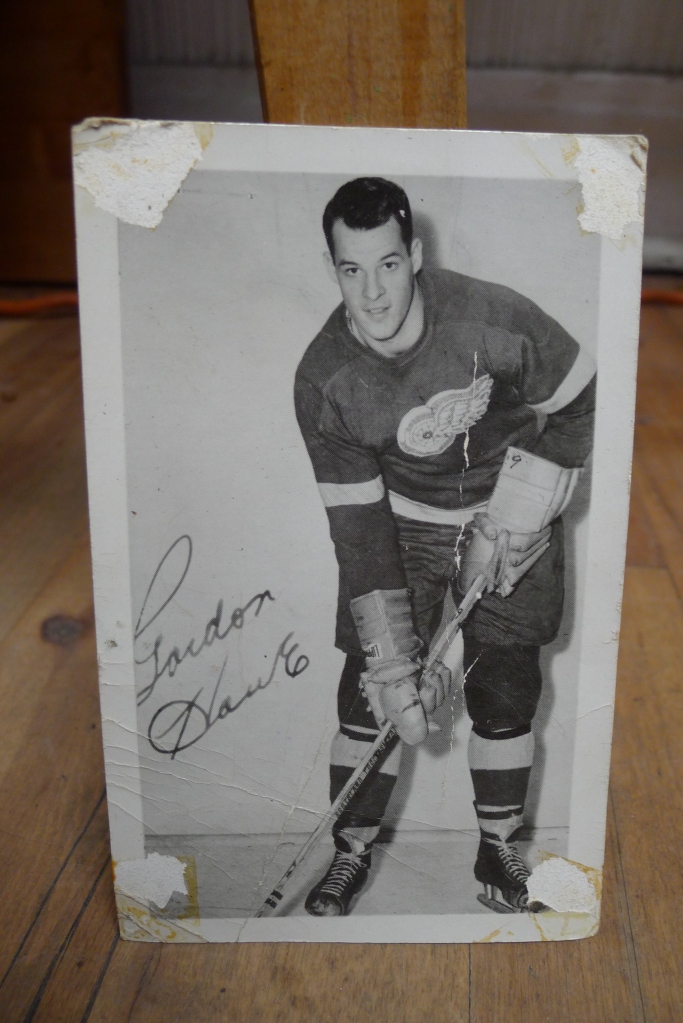 Last but not least is this old postcard featuring an hockey player that I think is Gordie Howe. What’s interesting is the message on the back, “Thank you for the nice letter,” which was typed using a typewriter. It’s possible that Gordie himself typed this brief message, though it’s also possible that he had someone else responding to his letters. Since there’s no proof that Gordie ever touched this it’s probably not worth much. There’s also a marks on the front corners, probably from being taped to a wall. It’s still pretty cool though. 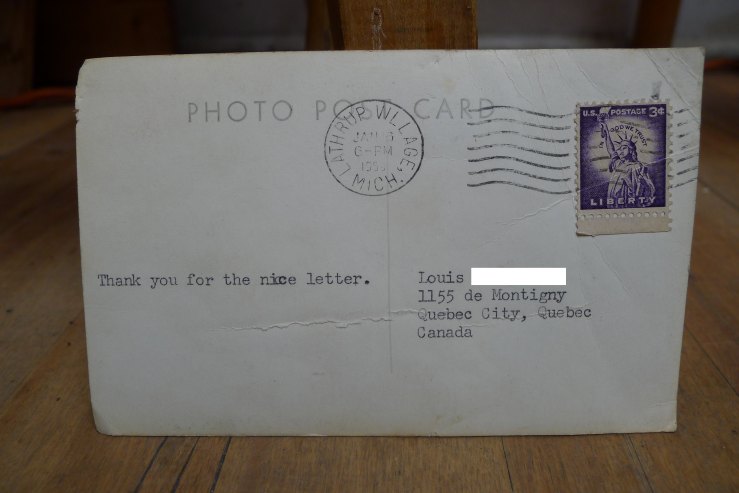 I’m glad I ignored the security guard, otherwise this stuff likely would have been lost forever. I acknowledge, though, that I’m privileged before the law as a clean cut white guy. If I were part of a different social group or had a mental illness things like this would be much harder to get away with.

The usual route for tomorrow is Outremont and Rosemont. However, I’m feeling adventurous and want to explore some new places. Maybe I can find a route to do in Cote des Neiges or Ahuntsic. I have some research to do!