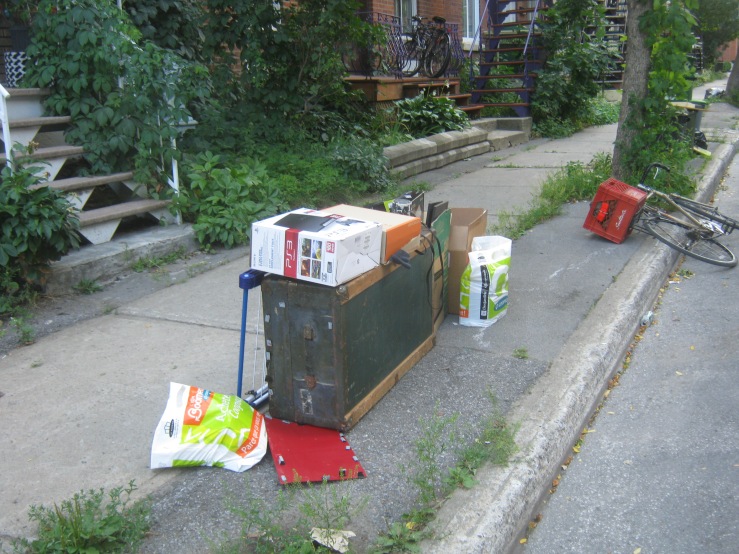 I decided to take the morning off so I could relax and prepare a bit for the yard sale. I’ll be out later this afternoon, though, hoping to find more stuff behind that place on Rachel that provided me with some great garbage on Tuesday.

I made it out yesterday for my evening Rosemont run. I had some good finds but it was almost too easy. This bunch of stuff was clearly set out for people to rummage through. My guess is that these people are moving at the end of the month and wanted to downsize a bit. 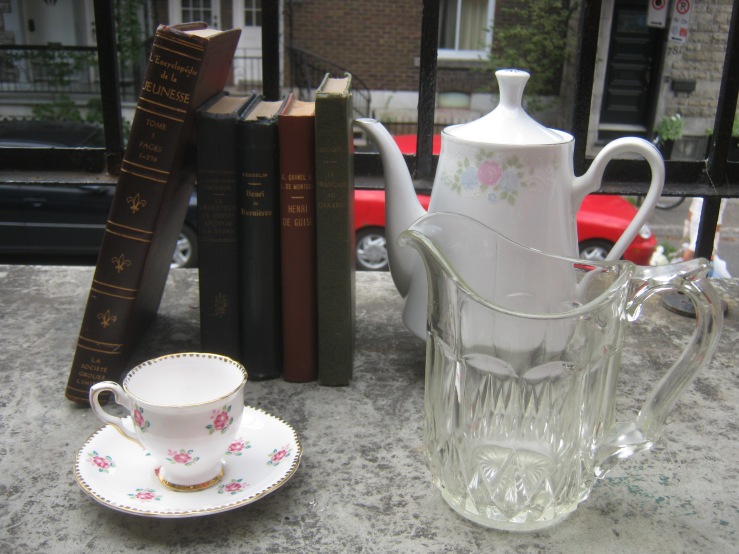 I took some dishes and five old books, most of which were published in the 1930s. The tea cup and saucer is a nice bone china piece by Royal Stafford.

There was also a nice belt buckle by Indiana Metal Crafts. This company is fairly collectible if Ebay sales are to be believed, I might just put mine up there with the others.

Perhaps the best find was this old Fujica camera with an extra lens. They were sitting on top of the chest right out in plain view. The combination is probably worth around 40$, though I wanted to experiment with film photography at some point this would be quite useful!

Near the end of my run I saw a box full of dishes and pottery on top of the bench on the right hand side of the picture. I wondered briefly if it was indeed trash but I remembered seeing an older man walking away from the area holding a couple of mugs and decided it was also set out for people to take. Too easy right?

I took a couple of vintage dishes and a set of four plain silver-plate goblets. A couple of goblets have an inscription commemorating the 20th anniversary of the “Centre du Rasoir,” a local store that specializes in grooming and kitchenwares. They were founded in 1959 which means that these cups aren’t particularly old. I cleaned them up a bit using baking soda and I’ll try to sell them at the yard sale.

Here’s a few more things from that Tuesday evening trash. This is a set of “day of issue” train-themed stamps from 1986. They’re in perfect shape and came with their original envelope. I’m sure some collector will have some interest in these.

Here’s an old first aid kit from Johnson and Johnson. It’s full of little vials of Metaphen, an antiseptic which contains mercury.

A little toy car by Marx Toys with an attached remote control. These days this stuff is all wireless! I have to find a couple of D batteries to test this thing with, I’d sell it at the yard sale but only if I could prove it works.

Last is this mostly full bottle of “Old Spice” cologne. Some people pay money for old fragrances, believe it or not. This very similar bottle (I can’t find the Canadian 250ml equivalent) sold recently for 40$. I also personally sold a small bottle of “Evening in Paris” cologne for 40$ a while back. This bottle is mostly full so I’ll put it up for around 35 and see if anyone bites.

I’m finally having a yard sale tomorrow, if anyone wants to come email me at thingsifindinthegarbage@gmail.com and I can give you directions. A lot of my recent finds will be there as well as some of the stuff that doesn’t make it to the blog. I also have a (relatively well-organized) suitcase overflowing with costume jewelry if that’s your thing. Come on by and help me unload some stuff before I move!

9 thoughts on “Too easy”