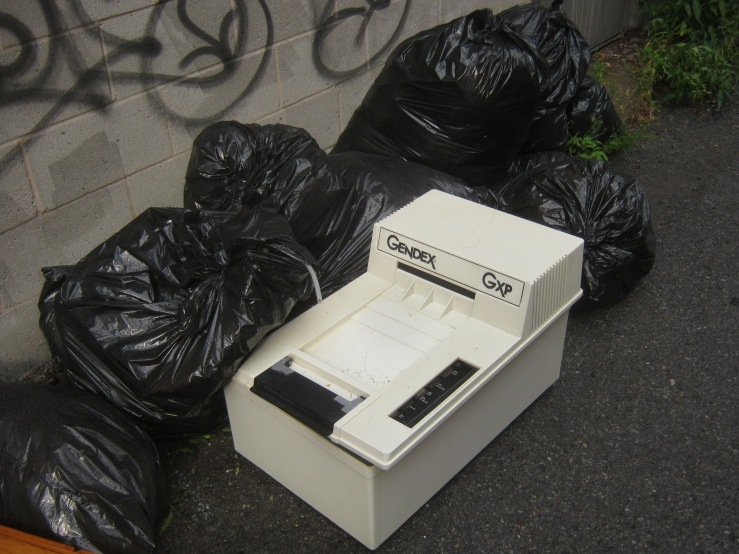 There’s been a heat wave here in Montreal this week, with temperatures ranging from the 30s to low 40s (humidity included). It isn’t great weather for trash-picking as people tend to avoid doing anything strenuous when it’s too hot. I’ve taken it easy as well, as I don’t want to succumb from heat stroke or anything.

My bike also needs some more repairs. I went for a slice of pizza on Tuesday and when I came out no more than 10 minutes later my front steering had seized up. It loosened up a bit but it’s definitely something I’ll need to fix. I think the hot, humid weather might have exasperated the problem.

Today I did a little run of the Mile End. I saw this curious thing on an alley and decided to look up what is was when I got home. Apparently it’s a dental x-ray film processor. It might have had some value even if just for parts, however being so massive it was basically impossible to bring home having not brought my bike trailer. It had also been rained on earlier in the day.

Otherwise, I found a collection of cassette tapes and a kaleidoscope in a black bag not far from the “Give Box” on St-Viateur. I left them, in addition to some bowls and an ashtray I had found earlier, in the box for others to take. Not a minute later I saw an older man with two children, a boy of maybe 8 years and a girl of maybe 5, open the box to see what treasures were inside. The older man picked up the kaleidoscope and demonstrated to the kids how to use it. They seemed to think it was pretty cool and the kaleidoscope found a new home!

It feels rewarding to see a tangible result from all this redistributing I do. I try to leave things I don’t personally want in more visible places for others to find very regularly. It’s rare, however, that I get to see someone take it home, let alone a couple of kids excited with their new toy.

I spent last weekend yard-saling, hanging out all day and making around 160$ in all, though some of that went to snacks and beer. I got rid of a fair bit of stuff, which feels nice. Now I have room for more! I’ll likely have another sale in early to mid August. I’ll be moving for September, so I’ll definitely be motivated to get rid of some of my excess things.

I’m heading back to my home town of Shawville, Quebec for the weekend to visit with the family. I should be back for the Monday evening trash run, unless I decide to take that time to fix up my ride.

4 thoughts on “Girl with kaleidoscope”