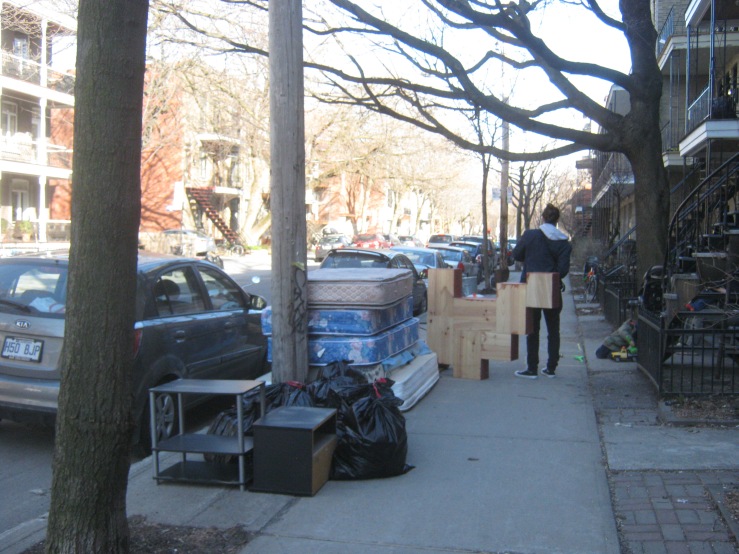 It’s been a dry week. I haven’t been able to go hunting for trash in the mornings because of the short temporary job I’m working but I also just haven’t found much when I have gone out.

I did come across this pile of trash somewhere in the Plateau, perhaps on Garnier north of Rachel. A woman sitting outside told me it was her neighbours (voisins) stuff. Apparently he called the Salvation Army to pick up the mattresses and a cool bookcase made of wine crates but they didn’t want it out of fear of bedbugs. A passerby took an interest in the bookcase and ended up carrying it home. Glad it didn’t go to waste!

Behind the mattresses in this picture I came across some old, oddly shaped bottles of chianti.

I took 5 bottles in all. The tall one on the right is in the best condition, with minimal (if any) evaporation. The other tall one has a taped-up top and looks to have evaporated a fair bit. The middle sized one leaks from the spout – it may have gotten slightly damaged as I moved it. The two little ones are sealed but one is clearly more evaporated than the other. 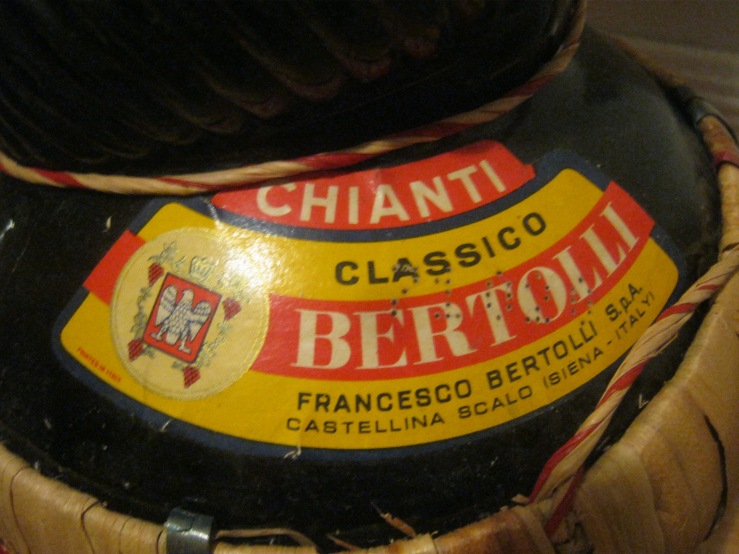 The best looking of the tall bottles is marked as “Vintage 1964.” All of the other bottles are from around that time too, with the latest being from 1971.

When I found a bottle of wine from 1982 a few months ago people seemed to think it would be fine, if not the best tasting (I still haven’t tried it, by the way!). However, does the same thing apply for a bottle from 1964?

The other, more evaporated bottles are probably best used as decoration, but I wonder if the better preserved bottles are good to drink.

Let me know what you think!

In other news, the Journal de Montreal (en francais!) did a little story on my trash blog. You can see it here. I’m happy with how it turned out, other than the video which is a horrible example of me trying to speak French! It’s probably not as bad as I think it is, but it’s definitely harder to speak a language you’re not super-comfortable with when you’re on camera for the first time. I think my main problem is that I get lost on certain words, so if I make a specific effort to learn those words I might be okay.

There should be an article for you Anglos soon as well – I’ll let you know when that comes out.

Also, my friends are having a yard sale tomorrow on the edge of the Park by rue Mont-Royal and Esplanade. If the park officials kick them off (seems unlikely but you never know) it would move somewhere near there. I won’t be there during the day, but I’m going to bring some stuff and sit with it from around 4-7PM. I won’t be able to be there earlier, unfortunately, due to my work schedule. Given the short amount of time I have I’m going to bring only a couple of things, and by that I mean my stack of old Cinemonde magazines, my pillowcase of jewelry (which smell a bit like cigarette smoke, which means discounts!), and some other bits of jewelry I’ve found. I may also bring my old newspapers (note that most of the ones that remain are Expo 67 related).

So yeah, if you’re into old magazines and jewelry come on by. I might have something for you.