Today was the warmest day in since the thaw in early March. The city was bustling. Walkers and cyclists filled the roads, happy to be able to walk around comfortably and relatively effortlessly. More trash pickers came out of the wood-works – I saw an older woman pushing around a baby carriage full of stuff, going from pile to pile in search of whatever it was that interested her. It wasn’t bottles – I saw her pass on a whole 12 pack. Just goes to show that there’s plenty of different kinds of “dumpster divers.”

There was a lot of trash out but not much I felt the need to bring home. I mostly moved things to places where they were more likely to be found by others.

This bike was amongst a pile of renovation-type stuff. It was spray-painted that colour. Both tires were flat.

I should find out the location of the Mile-End bike co-op – I could have brought this bike there pretty easily. I’m not sure if anyone would have taken it but it likely had some good parts on it.

Underneath all the boxes I found this snowboard (behind the back wheel in the picture above). I left it in a location that was a little more visible. It was still early in the day so I’m optimistic that someone else took it home. 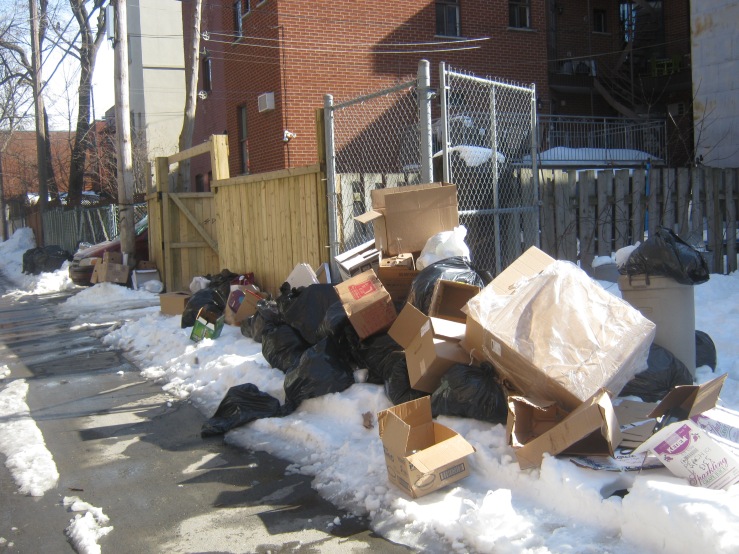 I brought home a couple pieces of nice glass baking-ware. They were pretty clean too. I figure I can make use of these.

This keyboard was incomplete but might have been good for parts. It was in an alley and I moved it to the street so that someone else would be more likely to see it.

The beginning of spring is definitely the nastiest season in Montreal. All the snow melts and reveals all the trash that didn’t make it to the truck over the winter. The city goes on a “spring cleaning” of it’s own once the snow disappears for good, but until then the streets can be pretty grungy. This alley in between Bernard/Van Horne and Parc/Hutchison might have been the best (or worst) example of a filthy road I’ve seen so far.

I hope to make it out tomorrow morning to either Villeray or Hochelaga/Maisonneuve, in addition to my own neighbourhood. I’ll let you know if I find anything good.