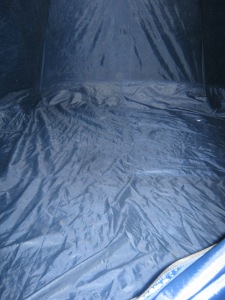 Yesterday I decided to take a look at the tent I found in my last post (with pictures of garbage anyways). I’ve had it stashed away in a trash bin outside my apartment – I don’t like bringing fabric stuff into my place until I give it a wash. Fortunately I’m 10 seconds away from a laundromat so washing it was pretty easy.

I spent a good hour trying to figure out how to put it together in my kitchen. Traditionally I’m not particularly good at putting up tents, but I stuck with it and got it done. I like to think I gained a bunch of tent setup experience points in the process.

Long story short: the tent looks great. I don’t think it was used often, and when it was I think it was taken care of. It looks like it would fit two people comfortably. I saw a framed couple photo in one of the bags, so I figure this tent was thrown out after a breakup.

I’ll probably hold onto this, it might come in handy next year.

I also put together that old aluminum Christmas tree I found in Hochelaga. It’s also in great shape – no missing parts or anything. Someone’s coming to look at it tomorrow, hopefully they buy it! I have it on Craiglist for 120 bucks, which seems to be the going rate for a 94 branch Evergleam on Ebay.

In other news, I gave away a few things on Craigslist today:
– the old wood cigar humidor
– the microfilm of the old newspaper from 1831
– the bit of random jewelry
– those old 1931 encyclopedias

6 thoughts on “Odds and ends”