Today’s been an odd, if interesting day. Lots of intriguing and sometimes grisly trash out, and a few people had some things to say. Let’s take a look shall we? 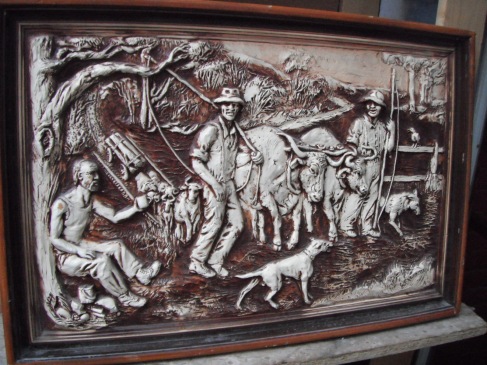 This morning I got up (relatively) early to do some moving work. On the curb in front of the place I was working was a desk, with this piece sitting on the top. It looks like it’s hand-painted on top of a styrofoam mold. On the back is this little history lesson about Bullock (ox) use in Australia (picture below). I get the impression it’s a souvenir from a trip to Australia in the 70s. I ended up carrying this back from Sherbrooke/Atwater to home, a good hour and a bit.

Some woman saw me walking with it and asked about it in French (although all I heard was “peinture.” I showed it to her, and she said “not bad… not bad at all!” in a moderately thick French accent. I agree. I think it looks pretty cool, and I might put it up somewhere in the house, if not my in my room. 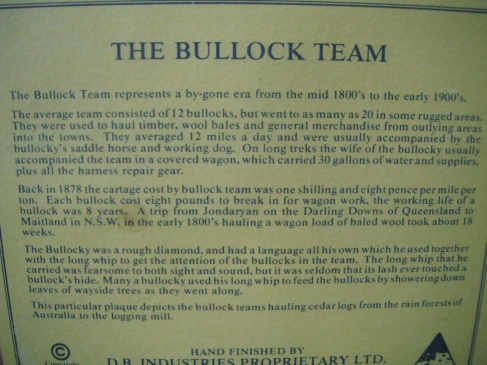 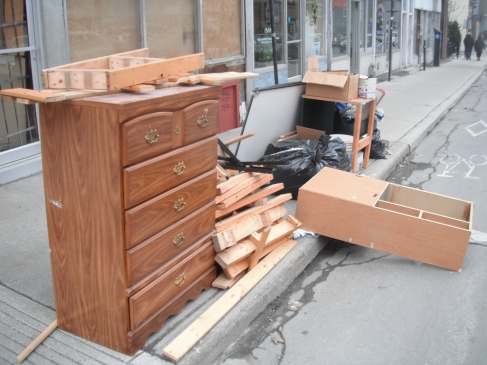 A decent looking dresser on St Urbain and Rachel. 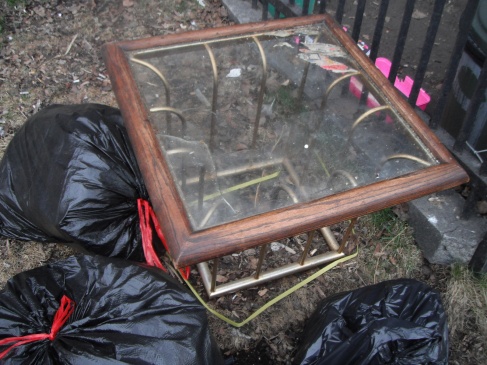 This table might have been cool, but it was a bit dirty and the glass was cracked. Might have been a good outdoor table, but I passed. 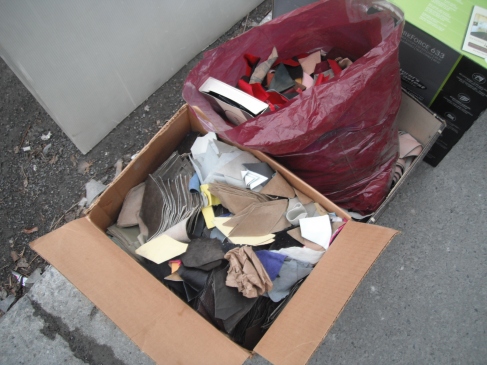 I found these leather cutouts on St Urbain between Fairmount and St Viateur. Most are were cut in a diamond pattern. Some of them were a bright crimson red, so now I can show proper solidarity with the student protests going on around here these days. I thought they could be used in a cool craft project, so I took the bunch and stashed them in an alley for later (picture below). They were pretty heavy, and I didn’t feel like stopping walking quite yet. 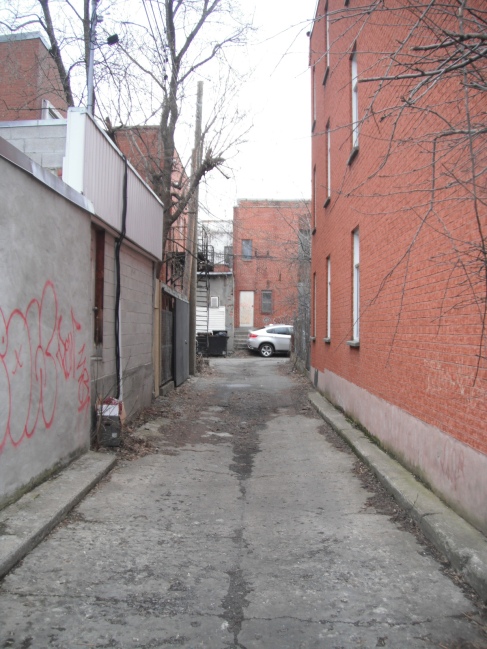 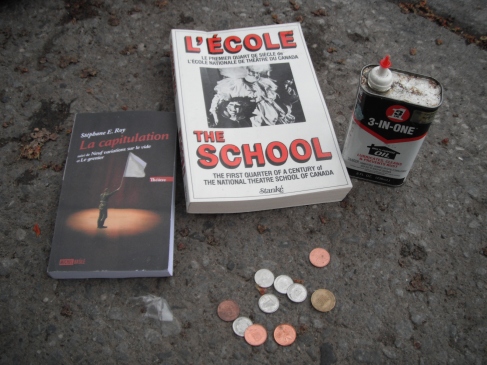 I opened up a bag on St-Denis and found a few decent looking books, some oil, and a decent chunk of change (54 cents, and a 50 cent(avos?) piece from Mexico. At some point when I was looking through these bags a few kids were yelling something at me about me involving the word “poubelle” (garbage). They seemed to think they were pretty cool, and the tone of their voice wasn’t particularly pleasant. I ignored them outright, I’m happy to say. Not even a turn of my head. 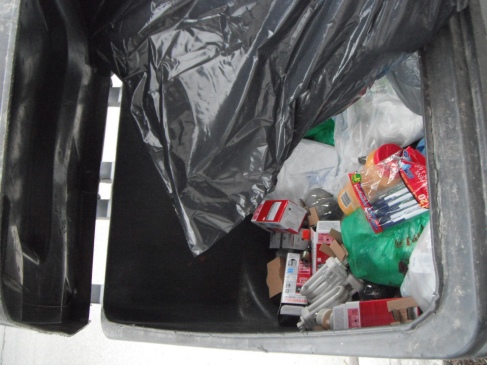 This garbage had 5 never-used pens in their original packaging (right hand side). Otherwise, not much of interest. 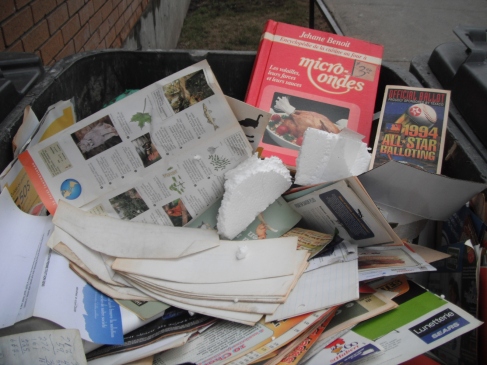 This bin contained some old-ish papers. Included is a microwave cooking book and a 1994 Major League Baseball All-Star ballot. 1994 is the year the Expos were actually doing really well, but then the players went on strike and the season was cancelled. The next year, as per the tradition of poor Expos ownership, many of the best players were shipped off to cut costs, and the Expos were mediocre to awful for nearly a decade after. It’s a solid bet that this had a big reason to do with the Expos decline and eventual move to Washington. I know I’m getting off topic, but I also think playing in that crappy dome didn’t help. If the Big O’s retractable roof worked, it would have been much more pleasant to watch a ball game. I don’t think Montrealer’s are the type to want to sit in an ugly concrete dome on a beautiful summer day, no matter how much they may or may not like baseball. 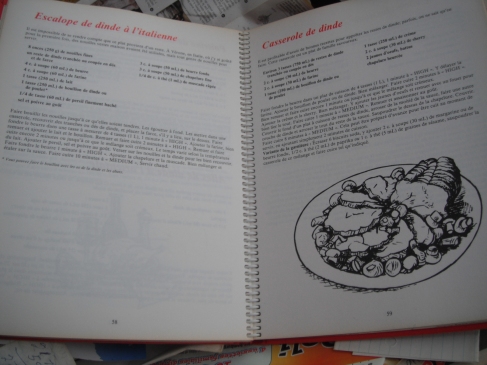 A close up of the microwave cooking book. Most of the pictures of the meals were these generic, cop-out drawings that had little or nothing to do with the actual recipe. Occasionally there were glossy photos of decent looking food that was probably not cooked in a microwave. I think microwave cooking was a bit of a fad in the 70s, before people realized microwave cooking inherently sucks. 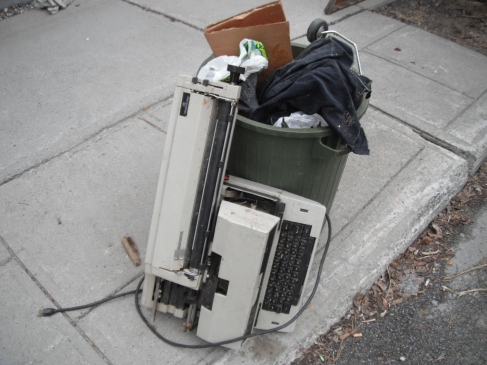 I found a nice working electric typewriter maybe a week ago, before I started the blog. This one didn’t look so hot. Pretty damn big through. Might get you some scrap metal money, if you have a truck. When I was looking at this, someone came over from across the street and offered me some big metal gates. I don’t really have a need for them (again though, probably good for scrap metal). He was pretty nice, and we had a brief conversation about garbage. He proudly stated that he’s sold a few things he’s found on the street on Kijiji. Welcome to the club, buddy. He had two cute kids with him too. He liked the art I found (last two images), and his daughter said that it would clean up fine. They seemed like a great family: they radiated good energy, and lacked even a whiff of pretension. 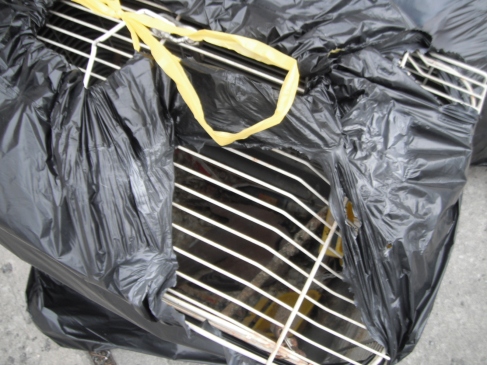 Now for the grisly bit. I considered not posting this for a millisecond, but I want this to be a flowery, fluffy garbage blog all about the antiques and awesome stuff you find, without mention of the occasional off-putting grit of the everyday. Anyways, above is a bird cage. The bag was already torn when I got there, and I couldn’t resist the temptation to look inside. 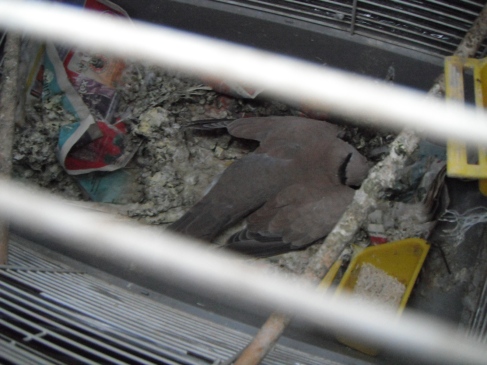 This bird has met it’s maker. The cage didn’t seem too clean, so I’m afraid it might not have been well taken care of. I don’t agree with owning pet birds regardless, unless maybe you have a bio-dome. Being stuck in what is essentially a 2×2 prison cell is kind of the antithesis of a fulfilling bird life. 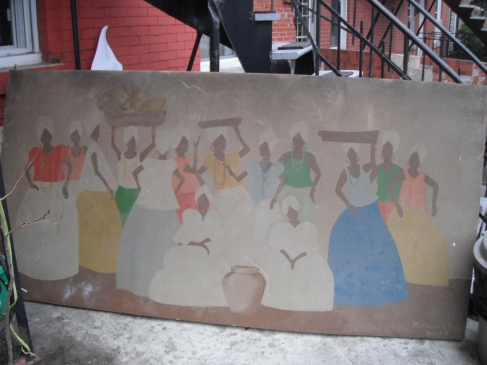 Here’s the last piece for now, that piece of art I mentioned before. This thing in friggin’ huge, and I’m sure some people were amused watching me lug this thing home. It measures in at a whopping 96 x 48 inches. That’s like 8 feet by 4 feet. The caption says something like “women of Brazil.” I was pretty dusty, but I was pretty sure I could clean it off pretty good. On the way back, a kid asked me if I painted it. I said no. He said it was pretty dirty, and thought it was “impossible” to clean. 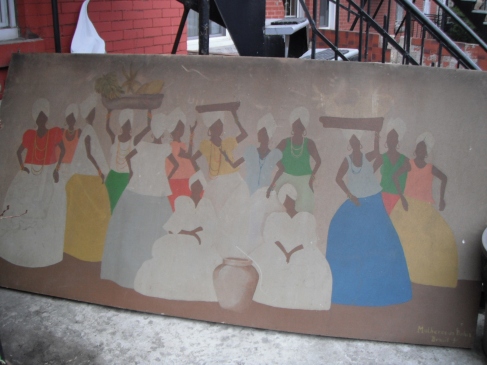 After my dusting, it certainly looks a lot clearer. The colors are very vivid, and I like the whole thing in general. There’s a couple of small white marks, and a bit of what is probably water damage, but overall I think it’s pretty attractive. In the end, I guess the little girl and the kid were both kind of right. Now, what am I going to do with this thing?

Check back later, I might have more stuff for y’all.