My yard sale tomorrow will feature lots of clothes, many of which came from these two large bags I found in front of a house in St Michel. (I found a lot of other neat stuff there, but that’ll have to wait for another post).

Clothes aren’t at all my expertise, and I used to pass them by more often than not. However, in the last year or so I’ve been taking clothes more often, especially when a) the people who owned them were rich, b) I can be 100% sure there aren’t any bugs, and c) they seem clean and of decent quality at first glance.

I still don’t particularly like selling clothes – I have way too much junk to deal with already at my sales. However, I figured out a deal with my friend Sarah where she gets a sizable commission and I don’t have to deal with them. I like to think it’s a win/win situation, and she understands the clothing market better than I do anyways.

Note that many of the next photos were taken with the aid of two mannequins I found downtown on St-Catherine. They weren’t really the right shape for the job (shoulders were too broad for one) but they were better than nothing. I mention this because the clothes will look better on real people than they do on the mannequins. 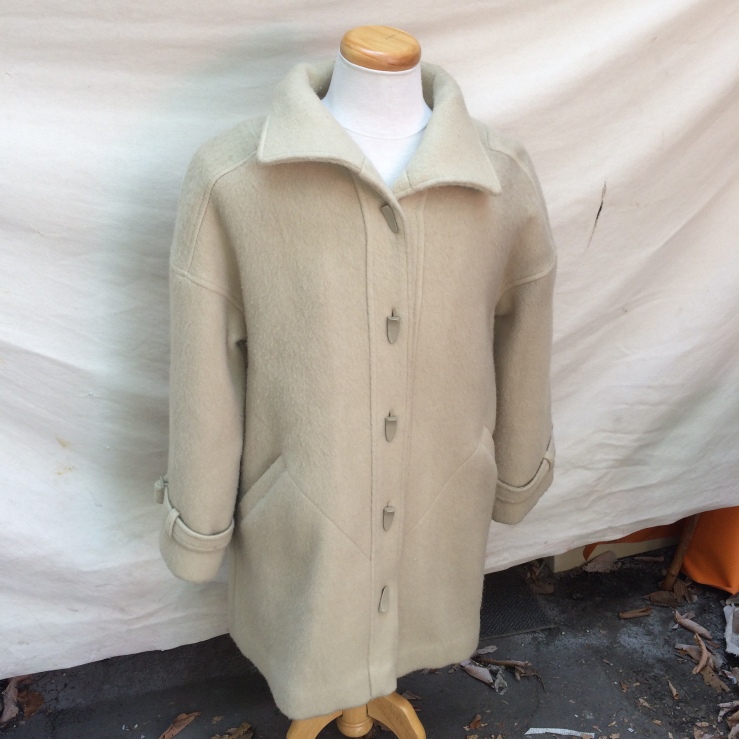 I found a lot of fall fashions in those bags, and thankfully the timing is right to sell them. This coat was one of my personal favourites. It’s vintage, 100% virgin wool, and I didn’t see a single stain on it. 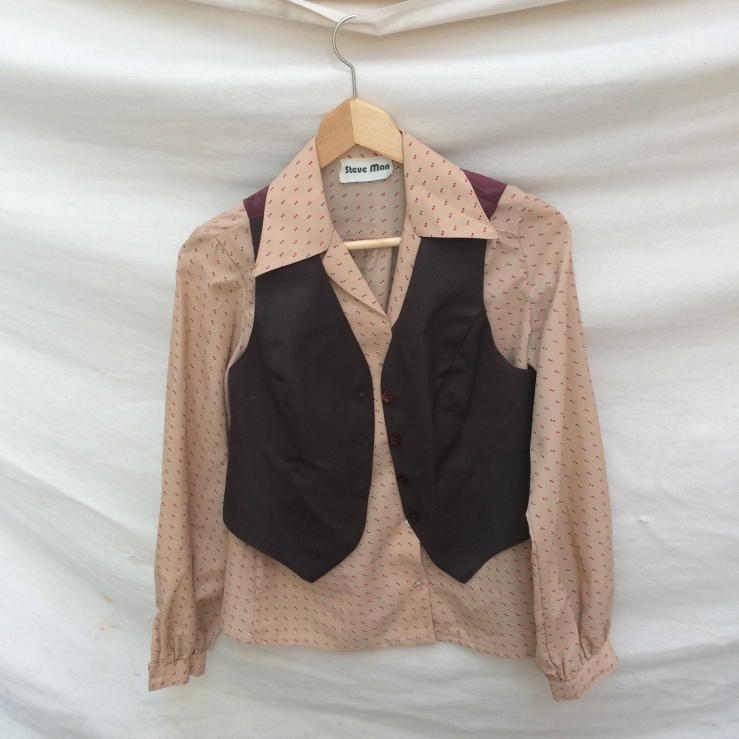 These pieces were both made by a “Steve Man” company based in Montreal. The brand name was kind of unusual, so I looked it up and found the trademark claim, which was only active for a short period in the late 70s and early 80s. 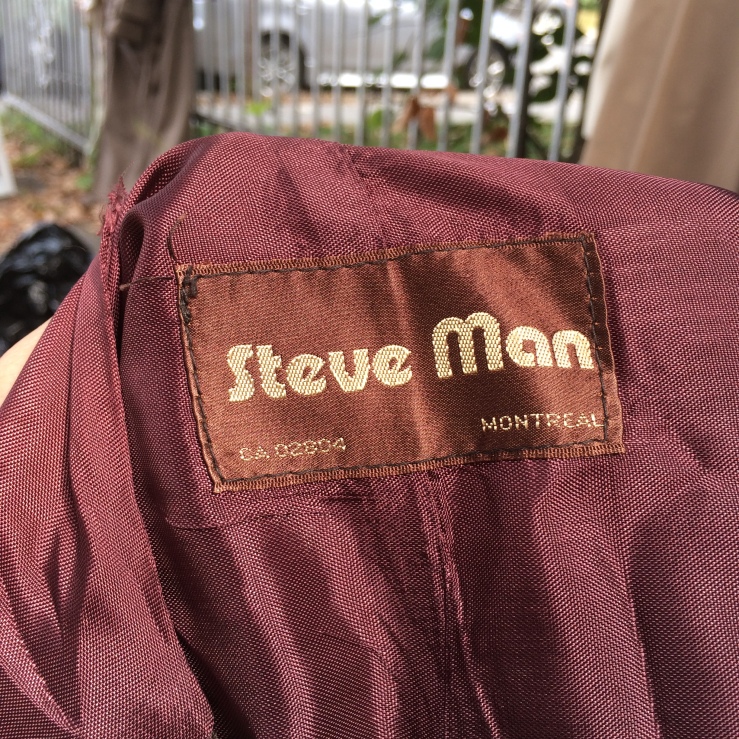 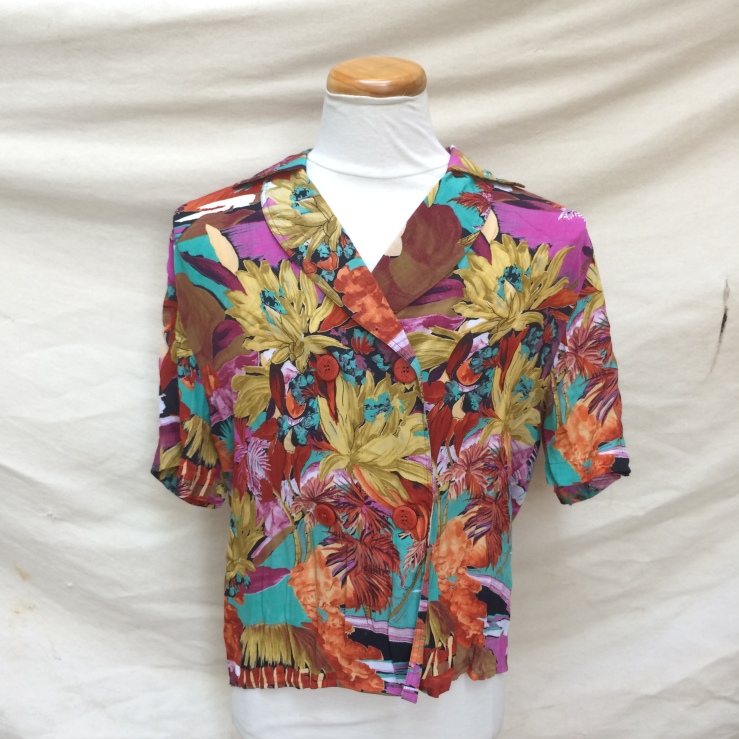 Here’s a loud but cool blouse… 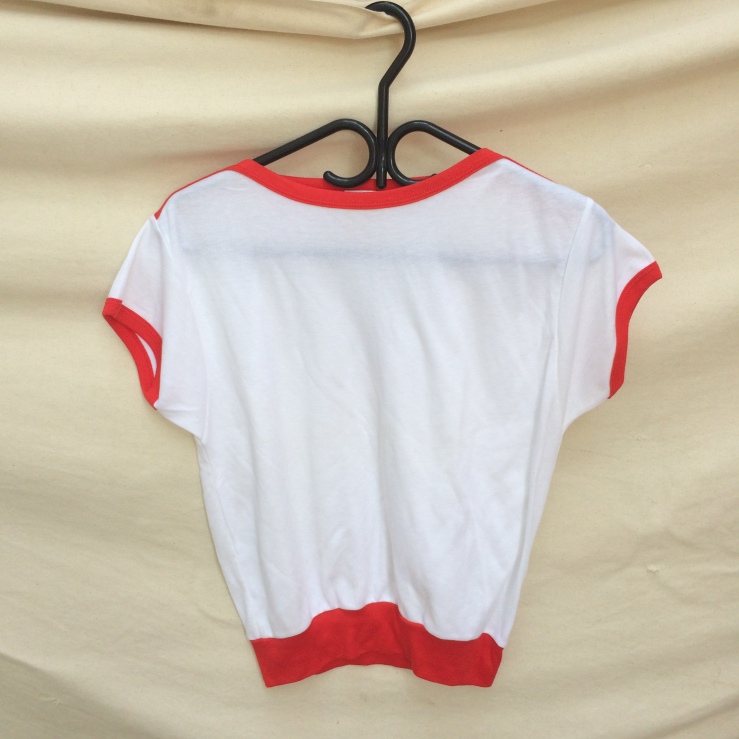 … a nice old sweater (I actually found this one elsewhere); 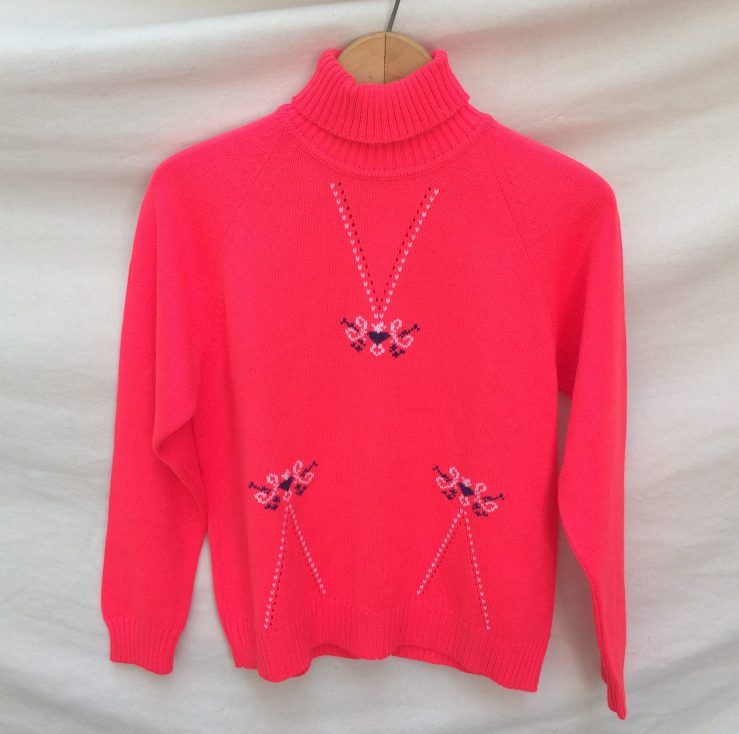 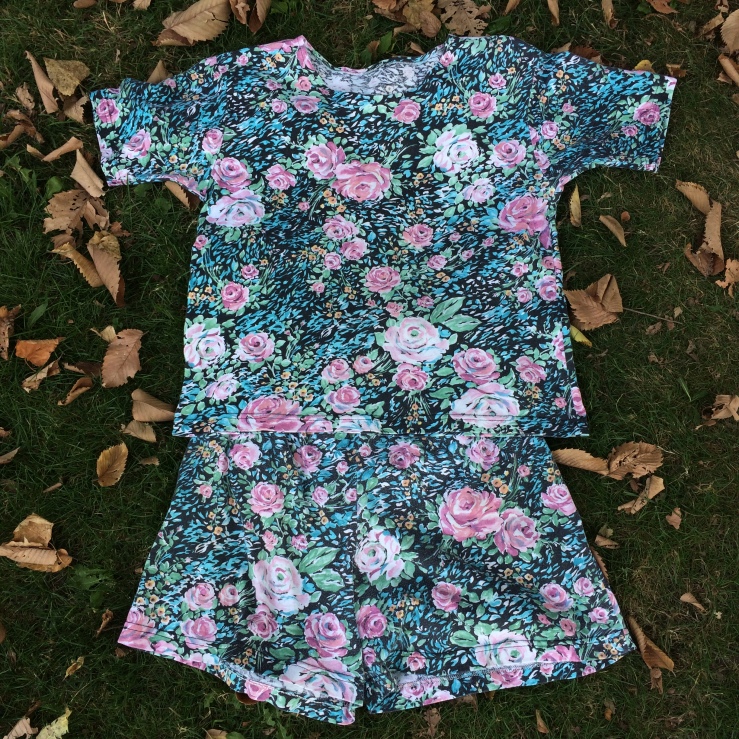 … and some other neat outfits.

… and a hat with another fur collar. These were all in very nice condition – I don’t often find furs in such good shape.

I've been finding a lot of great vintage clothes lately. @Trashed_trashcans and I made this timelapse as our version of an unboxing video. 🙂 Appologies for the garbage resolution – we saved it that way by accident. . . #thingsifindinthegarbage #scavenger #mtlmoments #mtl #vintageclothes #unboxing #unbagging #80sfashion #hawaiianshirt #timelapse #stopanimation

Here’s a little stop motion video we made featuring the clothes. Unfortunately it accidentally got saved at the lowest possible quality (garbage quality?), so it’s not as nice as it could have been. Still, it’s pretty fun!

As you can see there was a lot more that could have been showcased here, especially in the fall fashions category, but we both ran out of time and energy. You can see them if you come to the sale however, which will be tomorrow from around 11-5pm (maybe a bit earlier and later as well) on Mentana near the corner of St Gregoire. It’s right by Laurier park and metro station, so it’s fairly convenient to get there.

I’ve also been collecting lots of sewing and crafting material, so the sale will be of particular interest if you’re into fabrics, ribbon, lace, buttons, costume making, and so on. My friend is also helping me organize this section.

We did a little prep work yesterday, and here’s just a (very small) sample of what we have in stock! 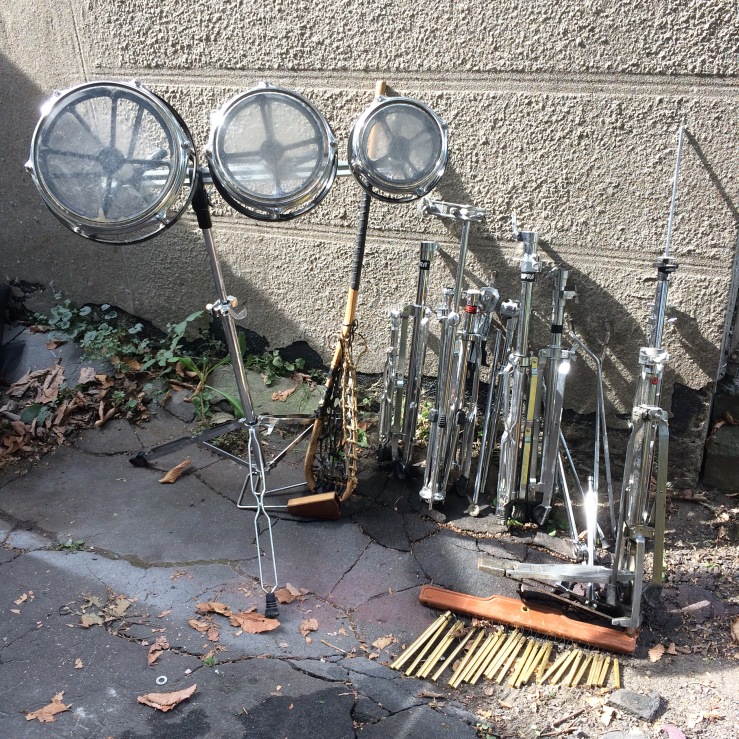 Otherwise, here’s some other stuff I saved last week. You may remember the roto-toms from a recent post – that same spot provided the roto-tom stand, and a bunch of other stands this time around. Maybe you can help me price this stuff… I think 10$ each for the stands is a good yard sale price (they’re in good but not perfect condition), but how much should I ask for that set of chimes and the roto-toms?

I also found a large collection of buttons, all of which seem to be from the early 80s to early 90s. There’s nothing particularly exciting here, but a few will definitely sell.

This stuff was in the bottom of their rolling trash bin. Unfortunately for me, the trash bin also contained a bag full of baby diapers, and I think these items spent a few days during the recent heat wave basking in their noxious odors. I don’t think any baby poop actually leaked out onto these, but they smell kinda gross even after being washed with soap and water. I’m hoping that exposure to fresh air fixes the issue, if not I’ll try baking soda or something. If you have any tips, let me know!

This might be a prime example of why a strong stomach is necessary if you want to get into extreme trash-picking; I wasn’t about to let a phantom smell keep me from taking that Land Camera. It’s not actually very often that I take items that are gross for whatever reason. However, it’s inevitable that you get your hands dirty somehow, either by opening a food waste bag, or encountering baby diapers / kitty litter. 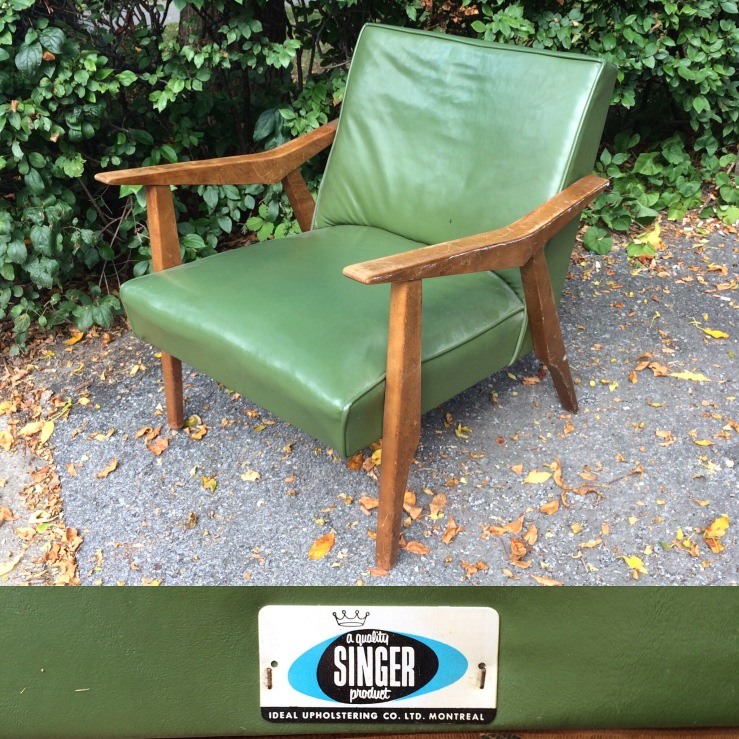 Elsewhere, I found a nice mid-century chair on a nearby heavy garbage day. It’s labelled as being a Singer, though I found no record of Singer making these kind of chairs online. The wood is in good condition but could use some refinishing, while the vinyl is actually in pretty good condition. What do you think it’s worth?

I found an irrigator / douche can in NDG. It came with its original box. I had never seen the term “douche can” previously, and now I know what those other enamel hospital things I found were.

This box of dishes was also kind of gross, particularly the bag of stinky food waste that sat next to it. However, I took the vintage mugs home and cleaned them up. The short mugs with the blue trim are nice, and labeled American Airlines on the bottom.

I also found a nice late 50s / early 60s McGraw-Edison “Eskimo” table fan in Outremont. It also came in its original box. It’s a beautiful fan, but it’s not the type you want to have around small children or pets.

Anyways, I hope to see you at the sale tomorrow! My friend and I also have lots of furniture if you need any. Check my Kijiji ads below to see a partial list of what’s available, and keep in mind that if you come to the sale I’ll give you a better deal than what’s listed there.