The other day on the corner of Mont-Royal and Cartier I came across this box of apples on the side of the road. A local grocery puts the older produce on the curb about once a week. It’s nice because it gives people a chance to easily take the stuff before it’s hauled off. Still wasteful, but way better and way more thoughtful than the “garbage prisons” that the more corporate grocers tend to make where there’s no hope in hell that you can get in.

Anyways, I took maybe half this box. The apples were all fairly wrinkly, and in the past I’ve often thrown out apples that looked like these ones did. However,  I’m trying to take my food a little less for granted and I knew the apples were fine. The man bringing out the trash assured me they were good too, so that settled it.

Anyways, with some inspiration from my roommate’s apple crisp I decided to make one myself! Using this recipe off allrecipes.com, I ended up making a pretty good crisp. 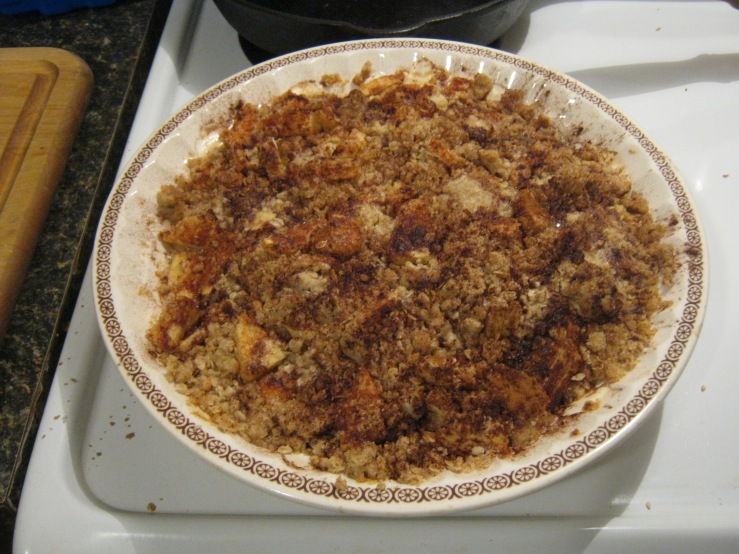 It doesn’t look like much, but I assure you it tasted really good! Maybe next time I’ll put a bit on a plate with some ice cream and photograph it like that. Regardless, three of the ingredients in the recipe (apples, sugar (found a couple of weeks ago) and butter (found yesterday) were salvaged from the trash.

It was a good learning experience all around. I’ve never made an apple crisp before, and learned that wrinkly apples are still pretty tasty!

I dumpster dived a couple of unopened almond milks from a local organic grocery. They don’t seem to have anything wrong with them… they’re not even expired. The containers were a bit dented, and maybe that was enough for them to just write it off. I gave one to a friend and kept one for myself. I cracked open those wafers from earlier too. Pretty damn good! Nothing wrong with them at all.

I just gave the half ships from earlier to my roommate as well. He liked them as bookends. The bigger, non antique scale I put back out on the corner of St-Urbain/Villeneuve. It works alright, but I don’t really need it. Someone will pick it up for sure.

As Ricky from Trailer Park Boys would say, “what goes around is all around.”

I got some little blood oranges out of the dumpster. A few of them were moldy, but I salvaged a bunch. There were a few more than seen in this picture, but I ate them. They taste pretty good, but they’re almost disconcertingly “bloody.”

I found this pan today, a block away from my place. Thanks to K for the tipoff. I don’t trust Teflon very much, but this one seems to be in pretty good shape.

What do you guys think about Teflon? I fear it’s long-term effect on my health, but am I overreacting?