I recently received an email from someone writing a book about Gord Smith, the creator of this sculpture I found back in the spring (and which came in at #5 of my “Best of 2019” list). She was browsing the web, doing some research when she came across my blog. She was pretty excited to see the sculpture, and asked me if I still had it. She shared some details about the work that I didn’t know previously, which you can see below:

“The piece is made of cor-ten steel and bronze was braised on top of it to create the beautiful texture. This sculpture is from a series Gord did between 1961 and 1969 called Growth. These sculptures were inspired by plant and animal life i.e. seaweed, flowers, birds…etc.”

Eventually, she showed the pictures to Gord, who she meets with regularly, and he offered to buy it back for 750$. That seemed like a very fair price, so I went for it. A friend of Gord’s came to pick it up, and the transaction went off without a hitch. I quite liked the sculpture, but I need cash more than I need art, considering all the student loans I have yet to pay off.

This sale also shows how letting things sit around for a while can occasionally be a good selling strategy. My blog is popular enough now that the things I write about appear in Google search results (not right away, but they get indexed at some point), which makes it more likely that interested buyers will find my wares. Of course most items won’t sell themselves, but these days I’m finding so much stuff that a few things are bound to collect dust for a while anyways.

Given the nature of the sale and the final price I think I’ll unofficially move this sculpture up a few notches on my “best of 2019” list. I think it could easily move into the #2 spot, and you could definitely make an argument for moving it all the way to #1.

That Inuit sculpture (#4, and which I found at the same spot) is going up for auction soon enough. Depending on where that ends up, I may want to unofficially change its positioning as well. 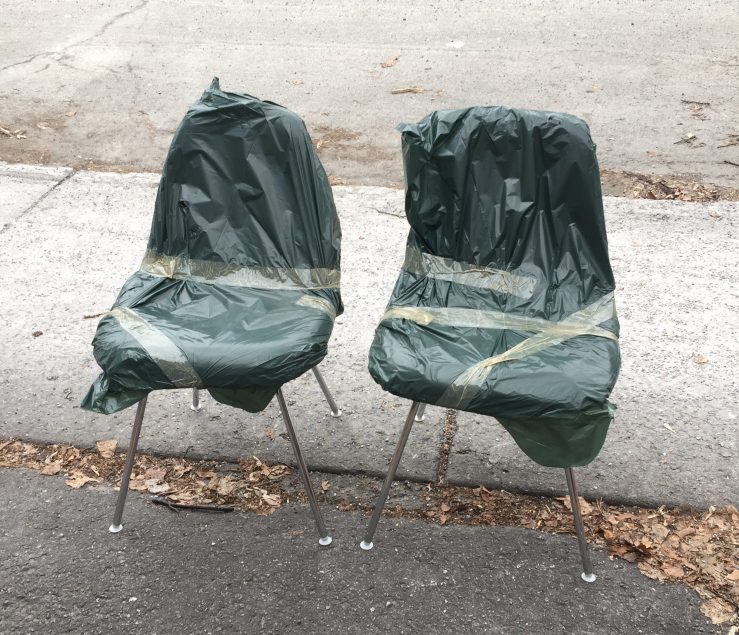 I’ll fill out this post a bit by sharing some miscellaneous one-off finds from the past few months. I passed by a huge pile in NDG the week before Christmas and found a fair bit of stuff, including these chairs.

They were vintage Eames / Herman Miller fiberglass chairs. They needed a bit of TLC, but I was still able to sell them very quickly via Kijiji for 180$. This was the first time I found an Eames chair of any kind, hopefully more are in my future!

Other things I saved from that pile included: a NAD CD player, a number of junky brass decorations, a few books and magazines, a pair of lamps, some kitchenwares, and a few little bits. 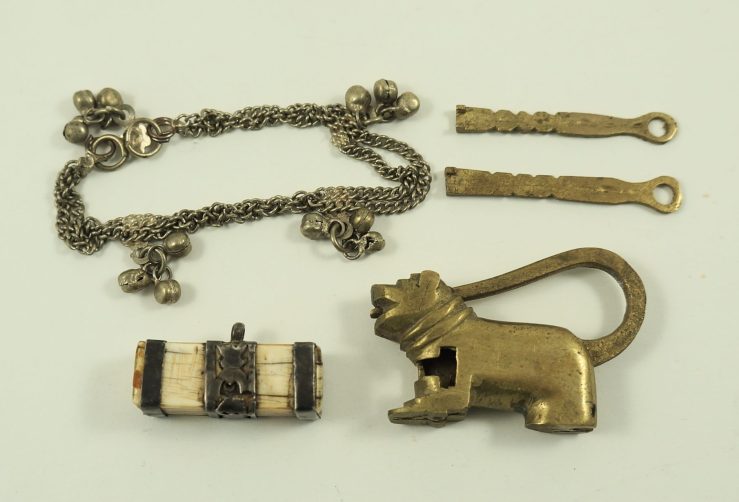 On the bottom right is a cute brass lock, which was probably made in India. At bottom left is a pendant that looks to be made from silver and bone or ivory. That bracelet (or maybe anklet) at top right has little bells on it and makes a very pretty sound.

I didn’t see anything else here in subsequent weeks, so I guess it was just a case of someone clearing out their garage or basement.

In late October I found a bag containing the remnants of a jewellery box. There wasn’t as much in there as I’d hoped, but I still found a few nice pieces.

On the right is a bunch of gold. The pearl earrings are pretty nice, as are the ones with the shiny stones. The rest was scrap quality, other than the platinum ring. It’s quite old, and comes with two of three diamonds. It’s a tiny ring, a size three, so maybe it was made for a kid. Regardless, it should sell “as is” on eBay, perhaps to someone interested in repairing and resizing it. The Mount Fuji medallion is pretty cool, my guess is that it’s a tourist piece.

Here are my best finds from another nearly random trash bag near Vendome metro. Those medals are likely gold and both date to the early 1930s based on the engravings on the back. If they are gold, at 8.5 grams they’re worth between 200-400$, assuming the carat is between 10 and 18. The brooch is cute, it looks like silver but I haven’t tested it. No signatures, unfortunately.

I did a lot of trash runs this week. I wasn’t particularly successful on most of them, but I found a few intriguing spots that could provide dividends someday. The “part x of a million” person is still tossing lots of stuff, and has been my primary source of late. I’ll probably share some more stuff from that spot in my next post.