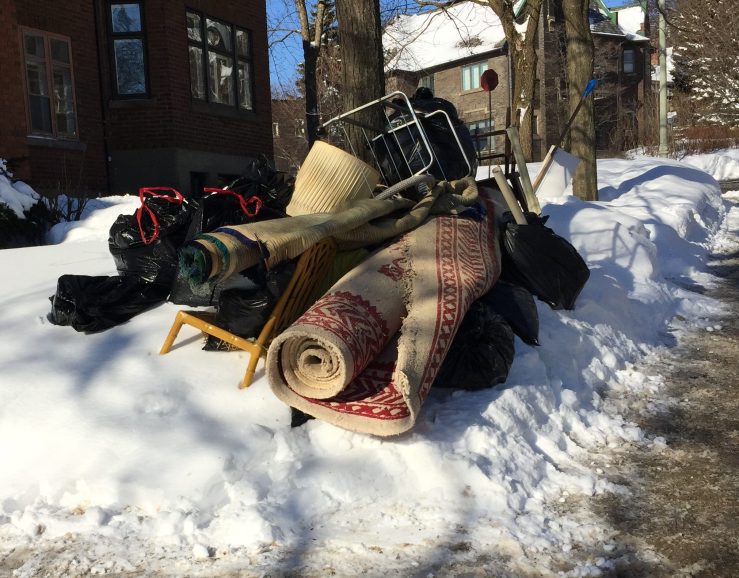 Thanks for all the comments to my last post! It does make me feel better to know that lots of people support what I do and enjoy the blog. I think a thick skin and regular words of encouragement are necessary in any misunderstood profession where people sometimes react harshly to your work. Off the top of my head I can definitely empathize with the parking enforcement folk, who rarely meet anyone happy that they got a ticket. If you can think of any other jobs where dealing with negativity is constant, please share them in the comments!

After discussing all that negativity I figured it was a good time to share a positive encounter with someone I met at the curb (in Westmount, no less). I first happened upon this pile way back in February – if you’re currently suffering in a heat wave like I am, looking at that picture might make you feel slightly cooler! 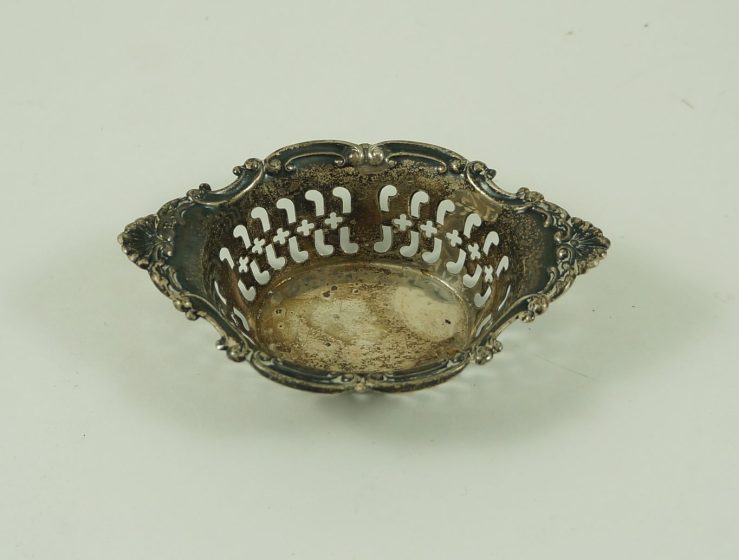 Most of that first pile was actual trash, but I did salvage this cute Birks silver dish somewhere amongst the clutter. It’s not worth a whole lot, maybe 20$, but finding silver is always fun and leads me to wonder what other valuables might get tossed in the future. 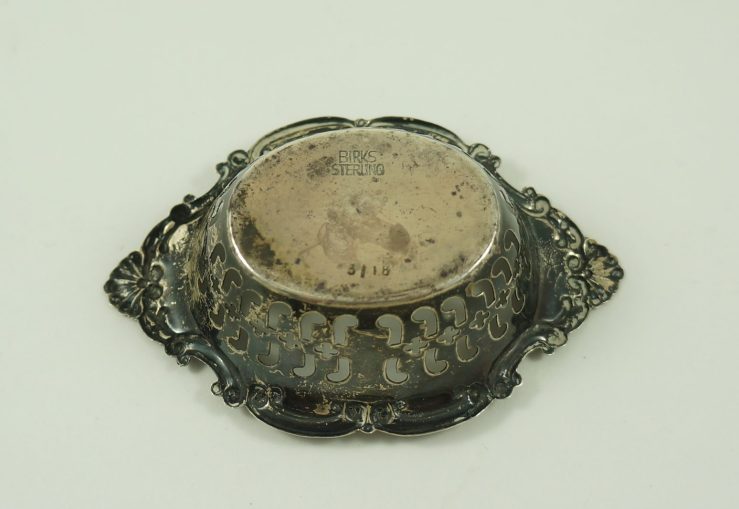 At some point I met one of the people doing the tossing. She asked what kinds of things I was looking for, a question I struggle with to this day because the possibilities are nearly endless. In general I’m looking for things with value, but that’s pretty vague and clearly I see value in items that other people don’t. I probably said something along the lines of “things I can sell at a garage sale,” but I should probably think of a better line than that. Either way she took my phone number, saying she had a lot of stuff to get rid of and maybe I could have some. She then lost my number, but we met again maybe a month later and actually got in touch. 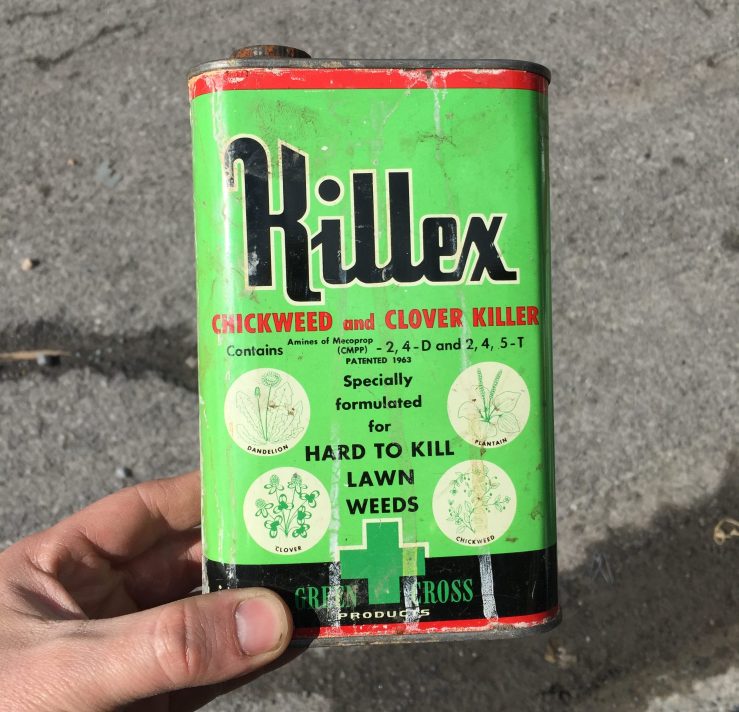 In the meantime I picked the trash, often finding little of value beside vintage curiosities. I’m a sucker for old tins and jars, so I took this c. 1960s “Killex” lawn weed killer. “Killex” seems like a strong word for something that mainly kills dandelions and clover. 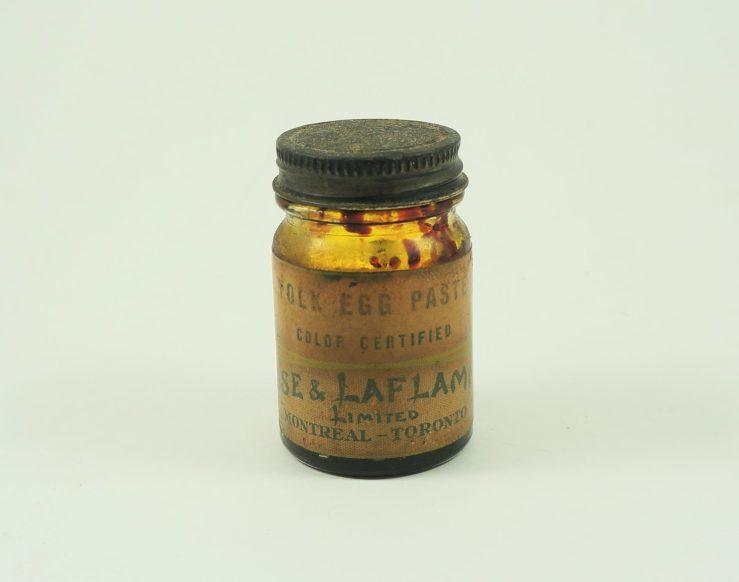 A couple of pieces ended up in my collection, like this “Yolk Egg Paste” made by Rose & Laflamme. I’m not sure what yolk egg paste does, but today it smells a bit like molasses. I’m guessing this is from the 60s as well. 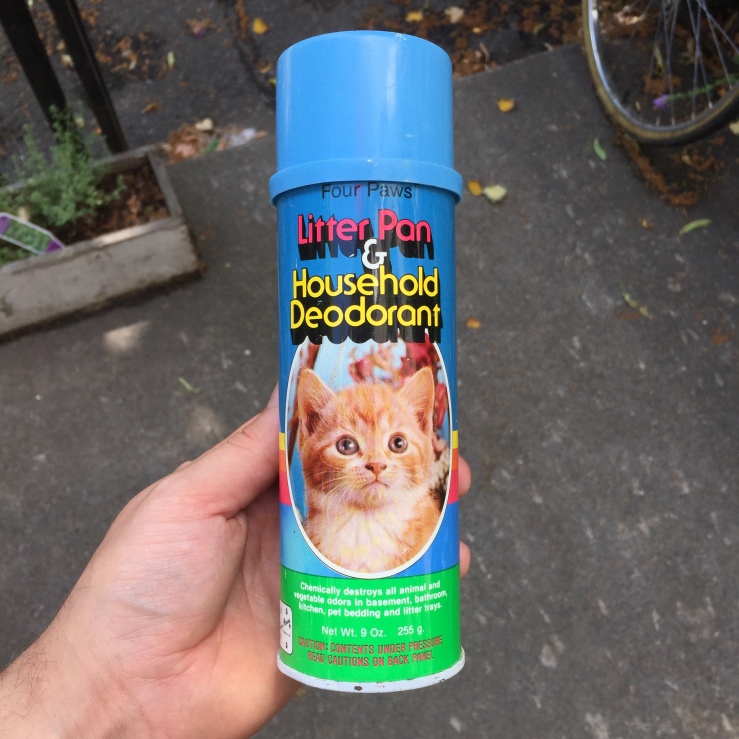 Also, I saved what might be the cutest can of chemically destructive aerosol deodorant ever made! I’m pretty sure this is from the 70s. 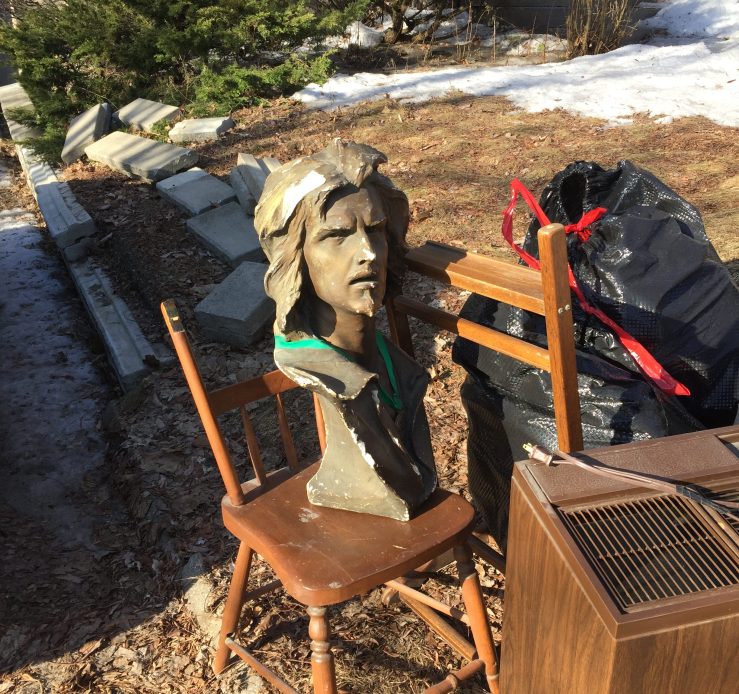 The finds improved as the weather got warmer. One day I was greeted with this chipped plaster bust. I didn’t know who it was, but someone on Instagram told me that it was Adam Dollard-des-Ormeaux. He was a folk legend of sorts here in Quebec, especially in the 1800s, but his legacy is now a matter of debate. Regardless, the chips weren’t so bad as to ruin the piece, and it sold for 30-some dollars at the auction house. I think if it were re-painted most people wouldn’t even notice the damage, but I have no idea what the buyer did with it. 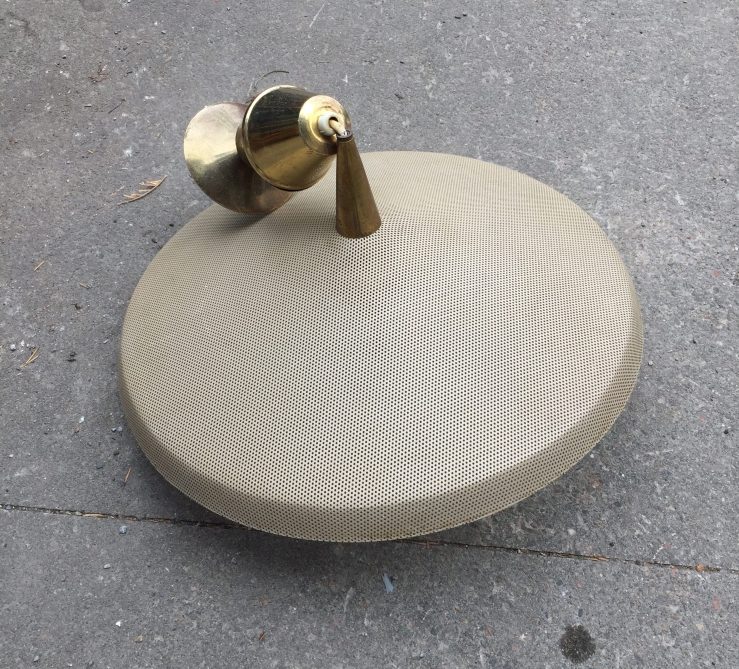 This vintage lamp was pretty dusty when I found it, but looked a lot better after I sprayed it with a hose (pictured post-hosing). 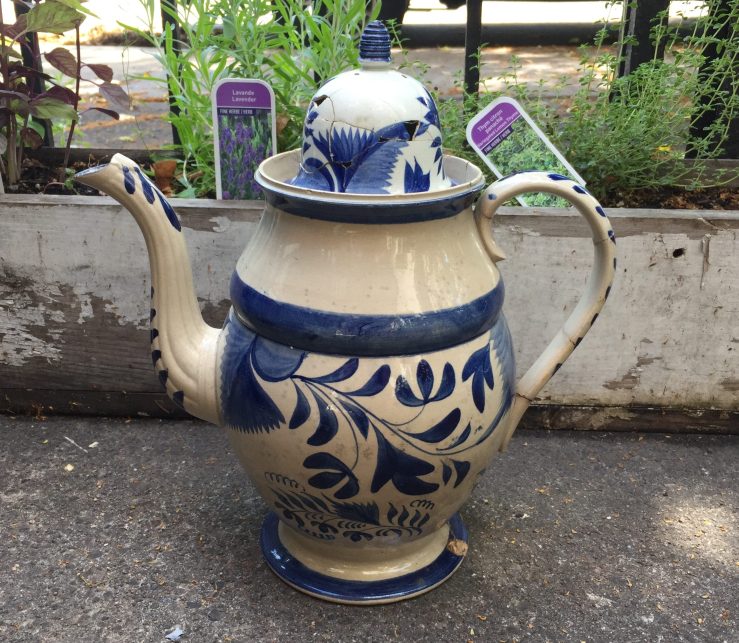 This teapot has unfortunately been busted in many places, the cover especially which is broken into over ten pieces (and missing a chunk maybe 1×1 cm2). Someone took the effort to glue it back together though, and I figured it was worth taking home. It looks pretty old, and I was thinking Chinese (but I don’t know ceramics that well). The pot and spout are actually intact, so that’s a good thing. If you know anything about this, please let me know! 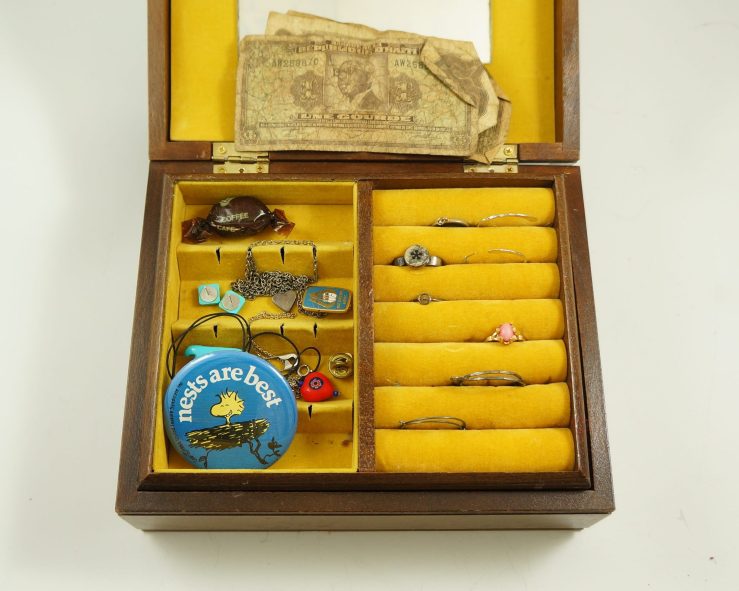 One day I found a jewelry box. There wasn’t anything super exciting inside, but I did get some fun yard saleable stuff and trace amounts of scrap silver and gold. Also, those Duvalier-era Haitian bills were cool. I sold them to a friend who does art with old money – apparently even dirty bills like these clean up pretty well because they’re usually made with high quality paper. 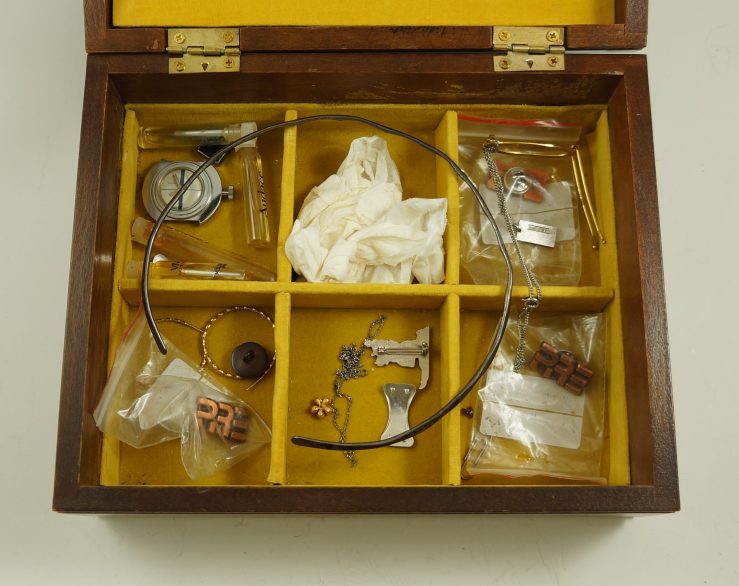 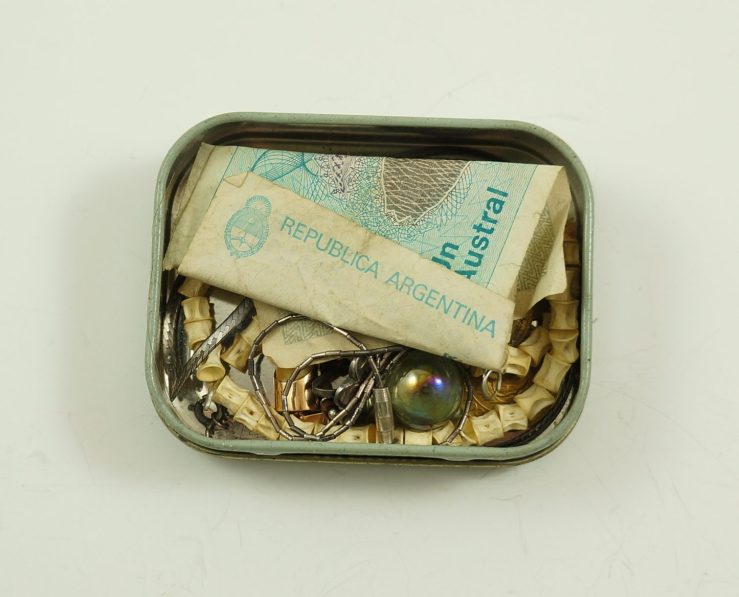 This tin was a little more exciting. Under that Argentinian bill were a couple bits of silver, a few coins, and a tooth pendant of some kind. I’m confident that the top is made from gold, but it’s tough to make out the hallmarks. 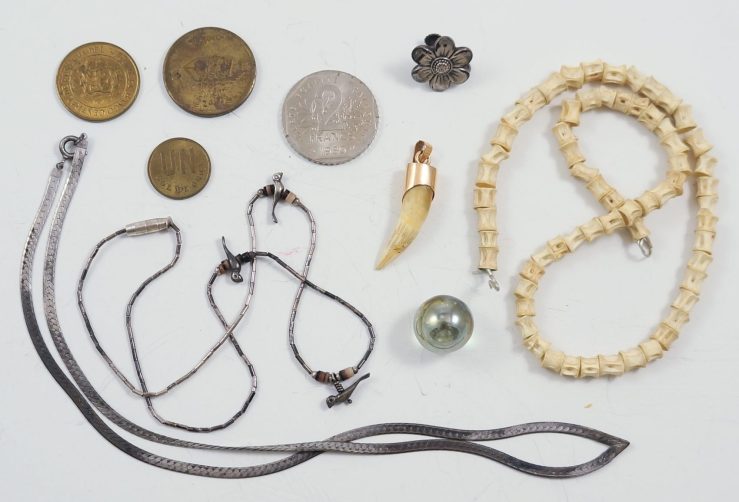 Around this time I met the woman again. As it turns out she was clearing out her childhood home after her father had passed away. She offered me a range of free stuff, a lot of which I took. She let me pick the garage before she paid someone to empty it – I found several cool things, and gave her a bit of money to show my appreciation. She seemed like a very nice person. 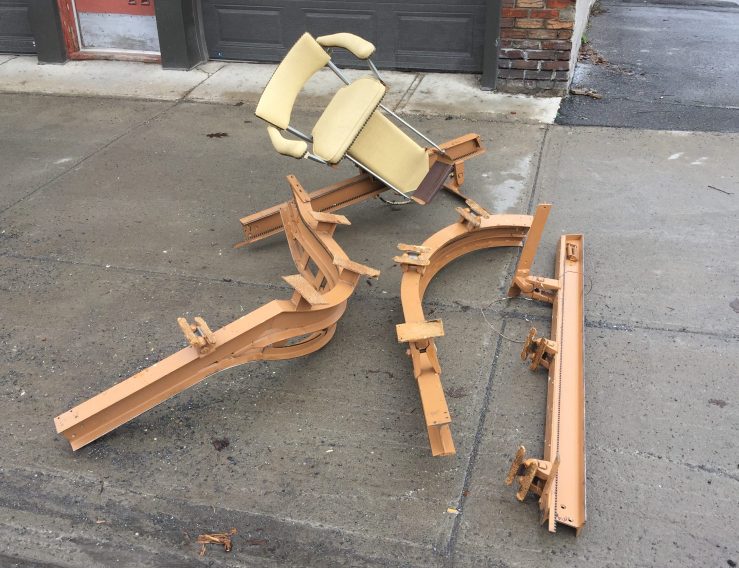 One thing I got for free was this old Wecolator stair lift. I’d never seen anything like it before, and I decided I had to have it. The beast weighed about 300 pounds, maybe more, and the piece with the chair was especially heavy – I needed to get a roommate to help me move it. The rails were sturdy and reminiscent of an actual railway track.

Not long after I brought it to my garage it became clear that it was going to be difficult to sell for anything other than scrap. The local auction house wasn’t interested, and I put it on eBay just to see if anyone would bite (they didn’t). As you can imagine this thing took up a lot of floor space, and after a while I got sick of tripping over it. It had to go, but I wanted to see if I could find it a better fate than the scrapyard.

Fortunately I thought back to an old neighbour who is well known in the community for his steel sculptures. I gave him a call and he was happy to take it off my hands. I was very happy to get it out of my garage, so I’d call the outcome a win/win. Last I heard he was getting parts of it sandblasted – maybe I can post the results here sometime in the near future.

So that all worked out, but in the future I should avoid projects that require a lot of work and little (and in this case, no) profit! 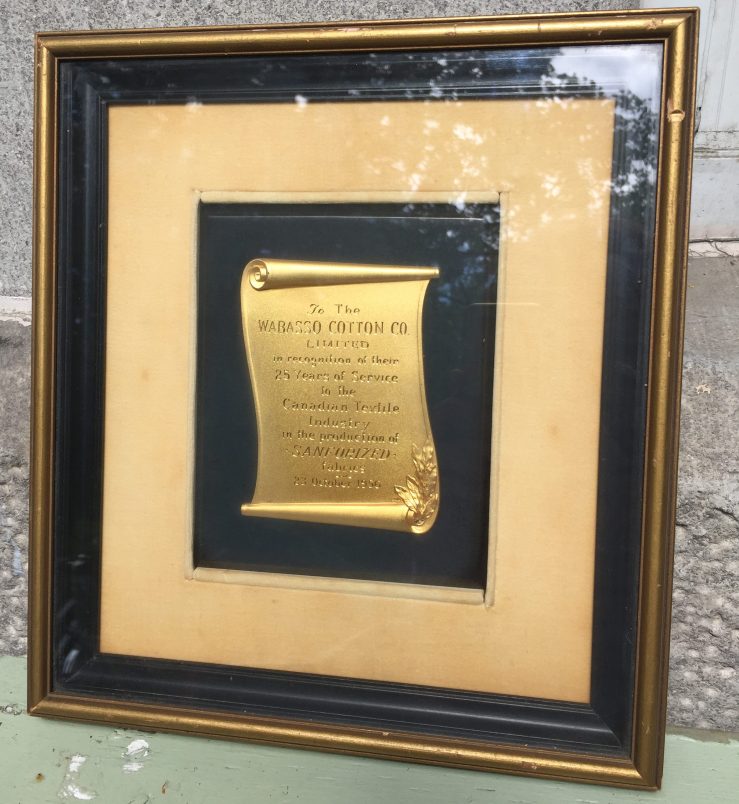 At one point I was offered this neat plaque. I forget why, but she thought I’d like it. The plaque was made for the Wabasso Cotton Company in 1956 in recognition of their 25 years making Sanforized (basically pre-shrunk) textiles. I remembered the company because I found a 10k gold 35 year service pin early last year in Rosemont. 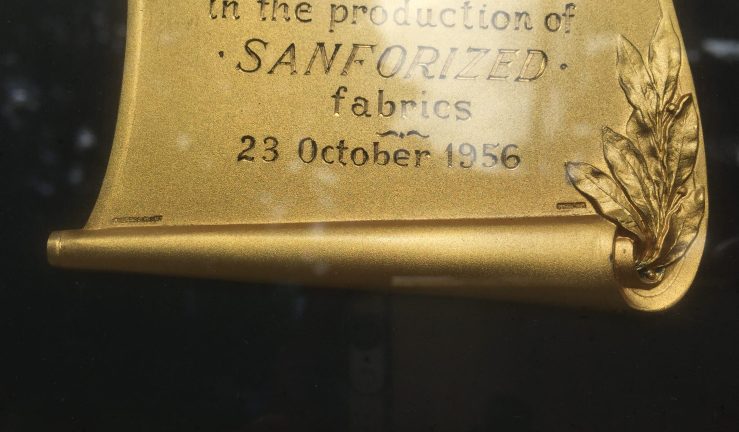 Later I noticed that the plaque was signed “Dieges & Clust Sterling.” I don’t know its exact weight, but based on the size I’d guess that it’s worth about 150$ for its weight in silver. I don’t plan on melting it though, it’s cooler as a decoration I think. 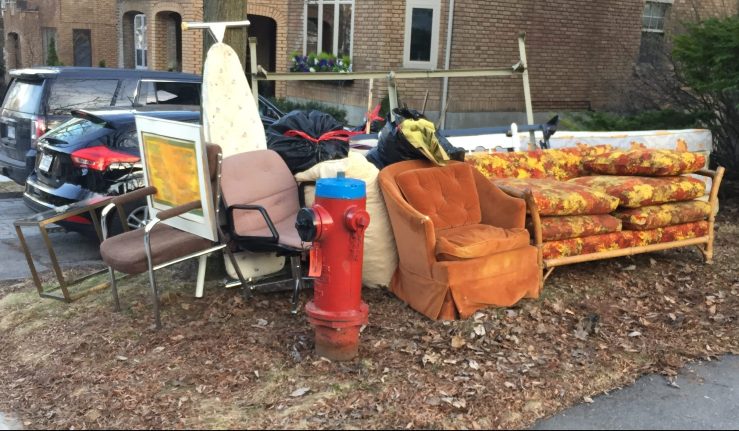 This was the last trash pile. A very colourful one as well! Most of the furniture was too worn out to be of value, but I found some cool little things inside the bags. 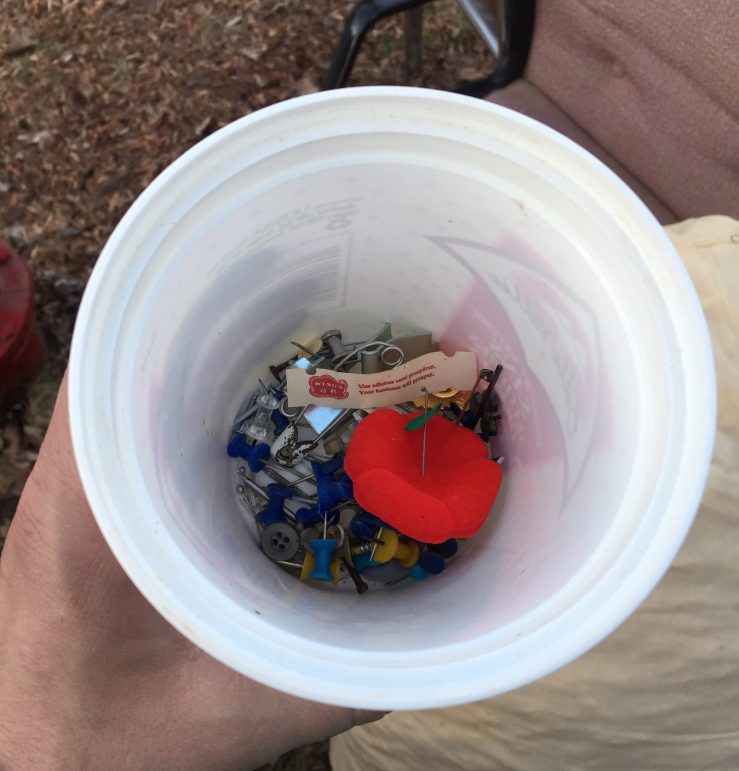 This yogurt container held a bit of junk, and also a minor treasure (I hope the fortune is accurate as well!)

That three leaf clover brooch came from the yogurt container. It’s signed but I can’t make out what it says (you can see the mark below). Regardless, the leafs seem to be made of little rocks and the piece looks quite vintage. That necklace on the right is also pretty nice, I think it’s silver but again the marks are pretty difficult to read (it might be double stamped). Otherwise, I found a cool Noras necklace (likely silver plated), a Parker Jotter, a tobacco pipe and a ring sizer. 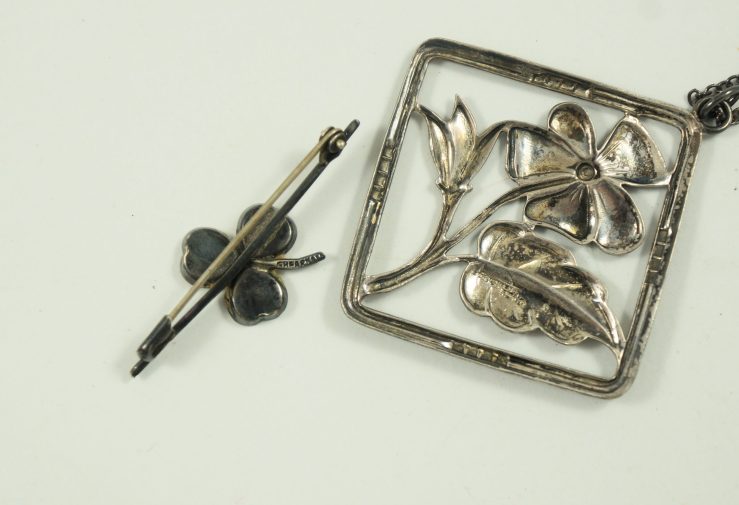 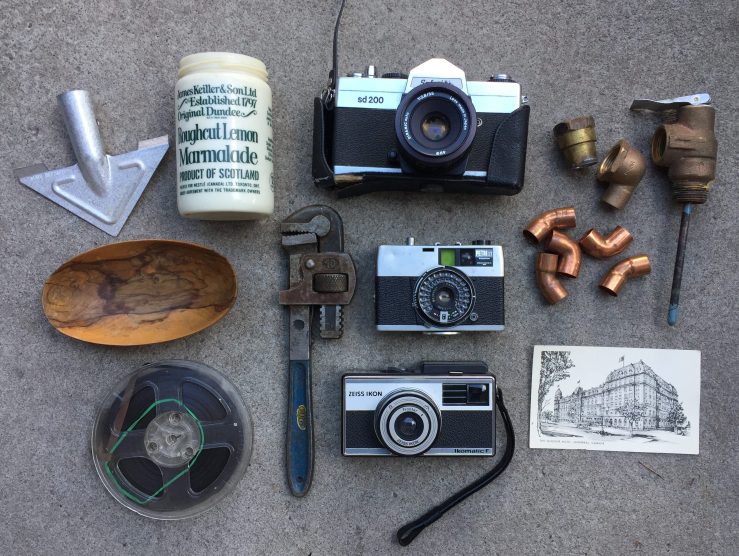 On that last day I also saved a few cameras (none of which seemed to work, but all sold at a yard sale for a buck or two), some metals for the scrap bin and a few other curiosities. 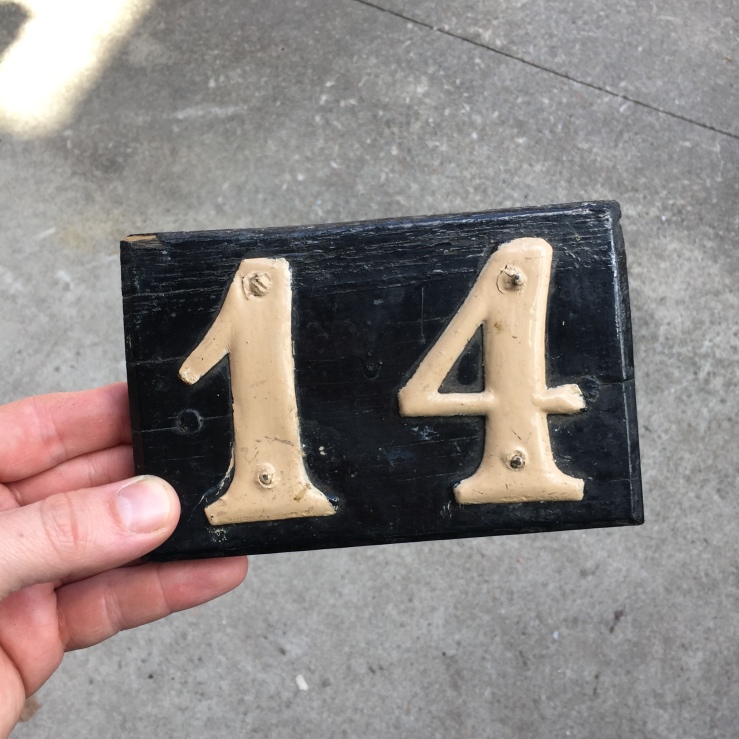 One of my favourite finds was this old house number plate. I’m a sucker for these as well, and I’ll likely put it up on my wall at some point. It’s different from the usual blue enamel plate you find in Montreal, and I’d guess it’s around 100 years old.

On the whole it was a very pleasant experience. Hopefully I can meet more nice people going forward! My luck on that front hasn’t improved since my last post, however…

I’ve found a lot of great stuff recently, but I want to share a few more of my awesome spring finds before getting to those. I’ll try to finish that off soon, but writer’s block has been a challenge as of late.

1. Facebook page
2. My eBay listings, Sign up for eBay, Search for something you want / research something you have (I’m a member of the eBay Partner Network so I make a bit of money if you buy things [even if they’re not mine] or sign up for an account via these links)
3. Help me pay off student loan debt / Contribute to the blog
4. Follow me on Instagram