Here’s the first pile from that especially productive day. As you can see it was quite the mound and it took a while to sort through! I met the lady putting it out and she seemed nice enough, asking me not to make a mess “because she had enough of one inside” (or something along those lines). These folks were clearly well off, and I came away with a huge pile of quality junk. Some was eBay worthy, but a lot of it will end up in the yard sale pile.

I did large groupings for the photos due the sheer quantity of things to document. As a result, you’ll have to zoom in to get a good look! That iPhone was a now vintage 3, I sold it for 15$ at a recent sale. It’s always fun to find things that are useful for the business, such as those bubble envelopes and markers. Those Dolceroma frames are the first of several nice pairs I found, most of which will appear in the next several photos. These ones are handmade in Italy, though the company doesn’t seem to be that well known in North America. 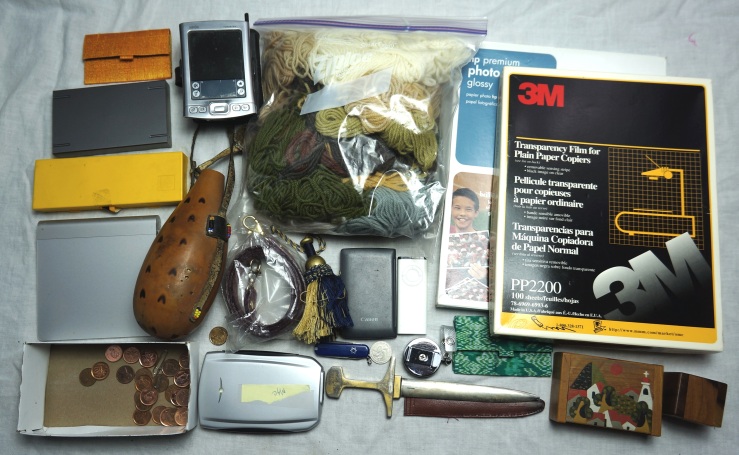 Here we have some pennies, an Apple trackpad, a Palm Tungsten PDA, a bag of yarn, lots of photo paper, and plenty more quality junk. 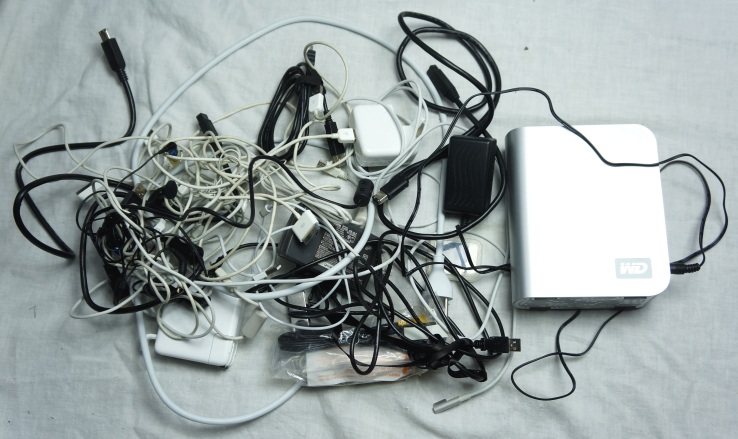 I found lots of useful wires, including one for a MacBook Pro (unfortunately, I never found the actual computer). The Western Digital thing is some kind of streaming device. 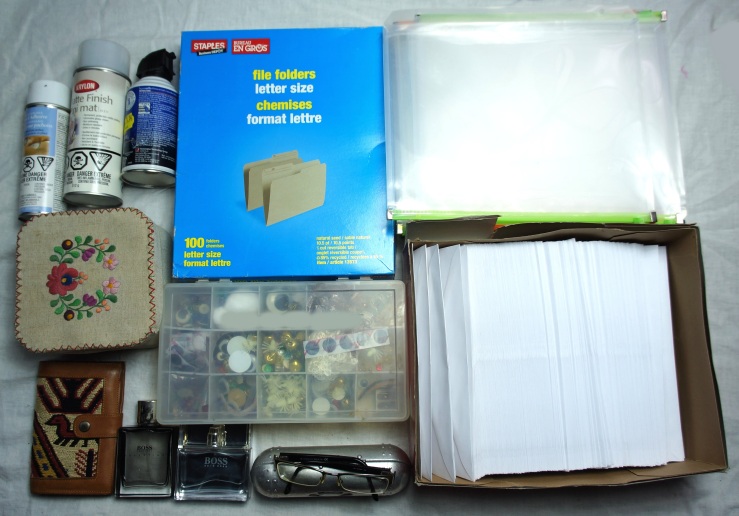 Nothing too exciting here, just a lot of useful stuff! Those Hugo Boss colognes should sell for a bit though.

There’s a couple of pretty nice eyeglass frames here. At the bottom right are some handcrafted wooden frames made by a German company named Rolf. They’re fairly expensive, and mine just sold for 100$. The frames above are by Paul Smith, I expect them to sell for around 50$. The watch is a vintage Enicar, nice but not super fancy. It’s probably worth about 50$ as well. The red box on top is a never opened Yi home camera, which seems to go for around 35$. At top left is an 2gb Apple Time Machine. 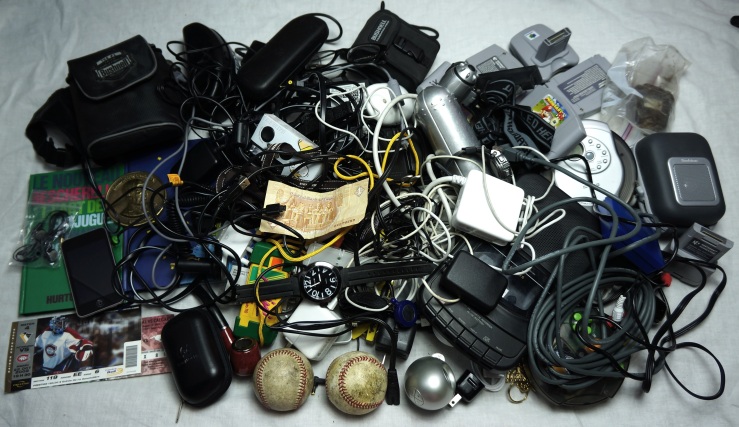 Lots of electronic stuff in this pic! I should be able to make decent money from that iPod Touch near the bottom right, as well as the Nintendo 64 games at the top right. Most of the rest will go into the yard sale pile.

But the most notable finds from this spot were the gift cards. It seems that the lady had a son who regularly received them as gifts. He didn’t much care for them by the look of things – above is a long expired (when that was still legal) 50$ gift card from Renaud-Bray, a local bookstore.

That was just a sign of things to come. I also found a Starbucks gift card, and when I checked online I discovered that it still contained 100$!  There’s a Starbucks a few minutes from my house, so over the past few weeks I’ve appreciated the gift more than the kid ever did. I’m actually there right now, using up the last of the money writing this post.

That’s not the end of the gift cards, however. I also saved a Banana Republic card containing 100$ and a Renaud-Bray containing 25$. There was a HMV card as well but they’ve since gone out of business… oh well! I guess I’ll be buying some pants and books. This is the first time I’ve found unused gift cards in the trash. I’ve saved a few previously, including one with 63$ on it, but at least those were lightly used.

The garbage has been flowing lately, though none of the finds are going to single handedly make me rich. Ville St Laurent’s heavy garbage day was productive on Sunday night, providing three big bags of vintage clothes, a cute melamine kitchen table, and some old unidentified tools. Last night’s run provided vintage Rusty Staub (RIP Le Grand Orange) era Montreal Expos publications and some quality audio equipment. My best run last week was in TMR, but I’ll share what I found there in a future post.

3. Etsy store
4. Kijiji listings
5. Help me pay off student loan debt / Contribute to the blog
6. Follow me on Instagram