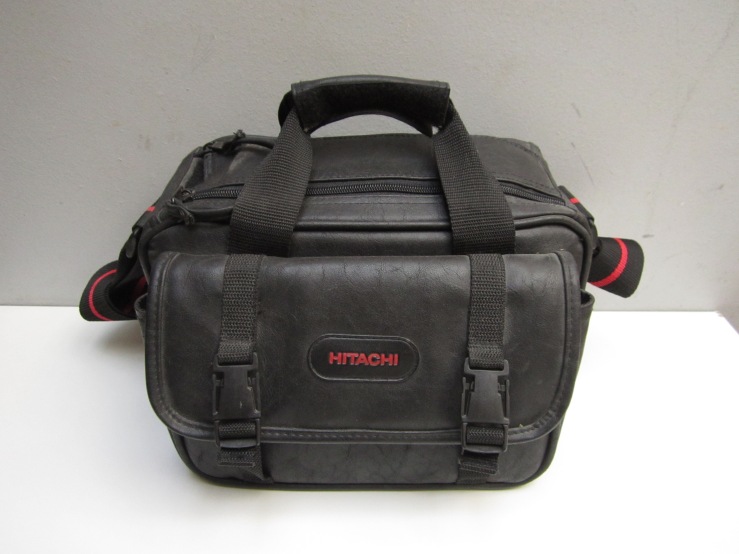 Last week was a bit slower than usual, but I still made some excellent finds. I pulled this Hitachi camcorder out of a bin in Hampstead on Monday – my only notable find of the night. 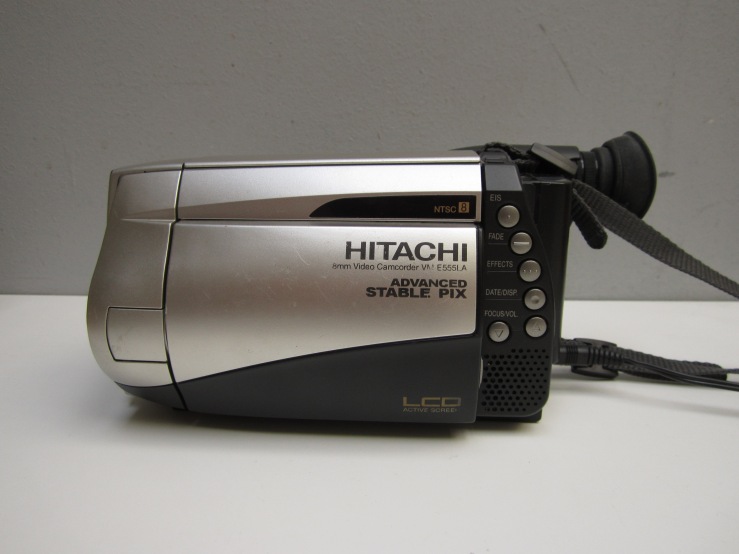 It uses Video 8 film and has an LCD screen. One just like it sold for for 100$ + shipping 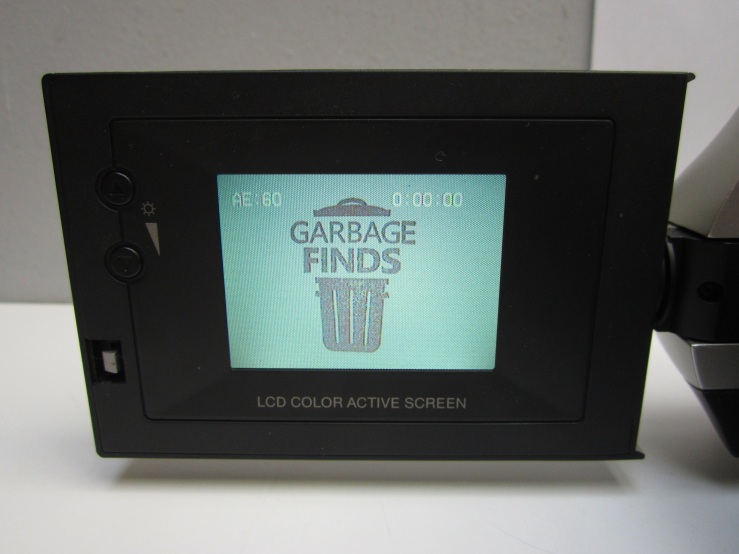 It works fine when plugged in, but the battery is completely dead. However, it costs only 23$

to find a new one on eBay. All in all, this camcorder should net me around 70$. Not bad! 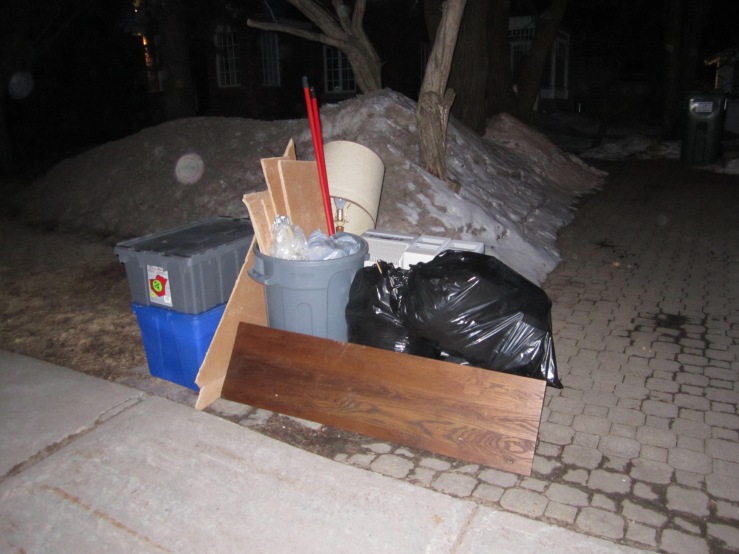 I came across what looked to be some spring cleaning casualties on Tuesday night. From this pile I saved … 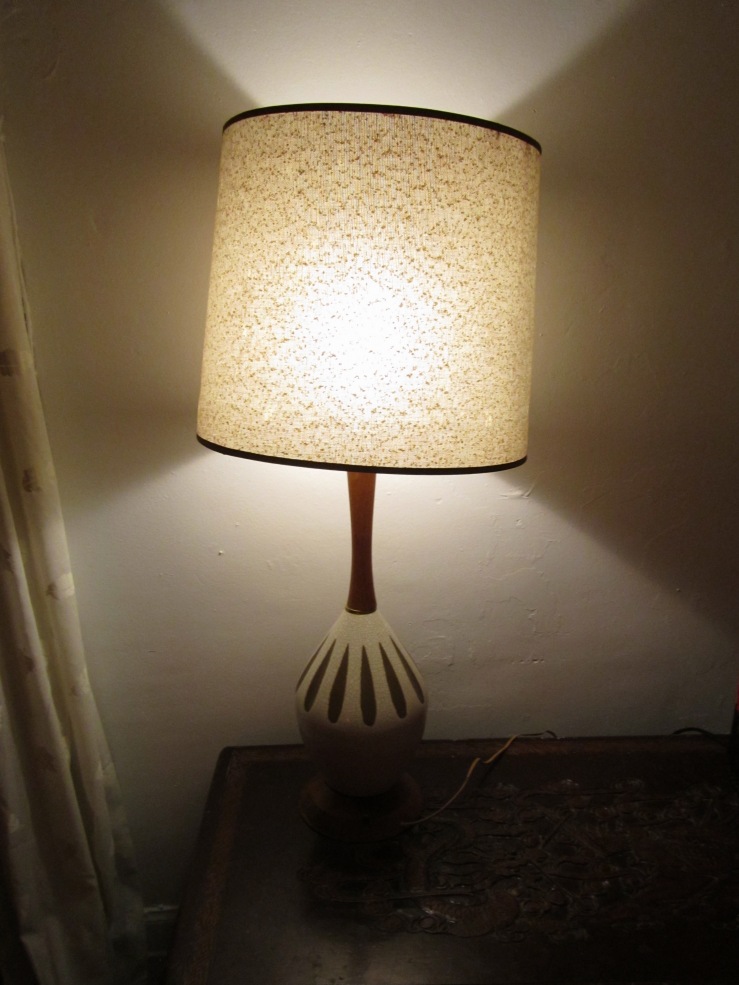 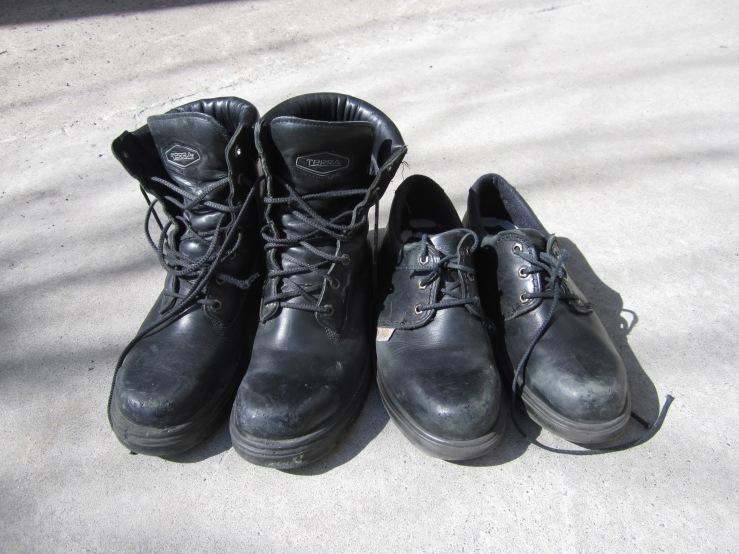 and two nice pairs of boots. I sold one pair at my yard sale this weekend for 5$. 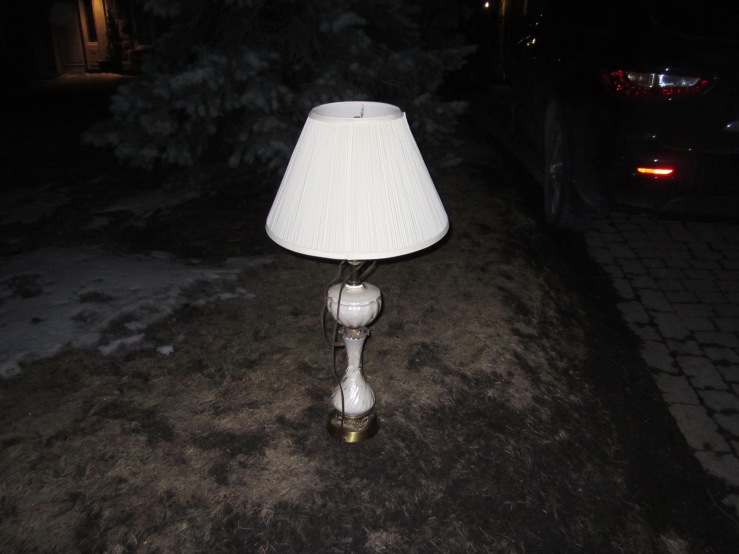 This lamp, also quite nice, sat all by itself in front of a different house. I get the impression that they left it out for someone to find, as there wasn’t a single other thing on the curb. 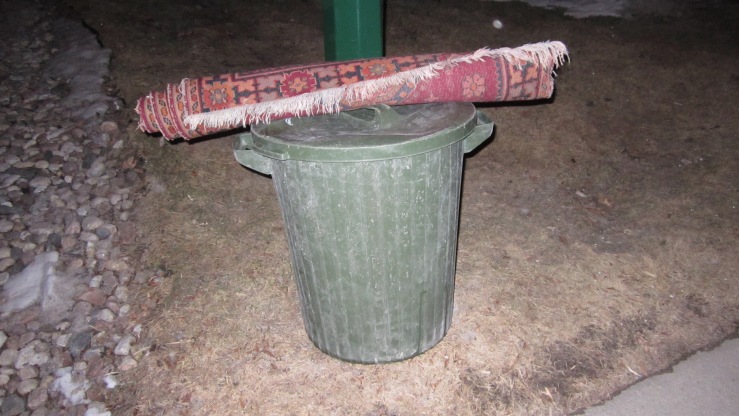 A little carpet sat atop a trash can at yet another place. It was missing the tassels on its longer sides, but was nice looking otherwise. 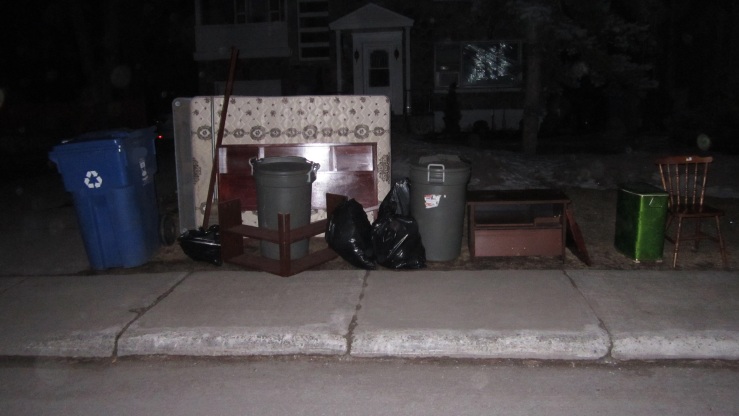 A familiar spot produced my favorite finds of the week, however. I took the laundry basket and the chair on the far right side of the photo. 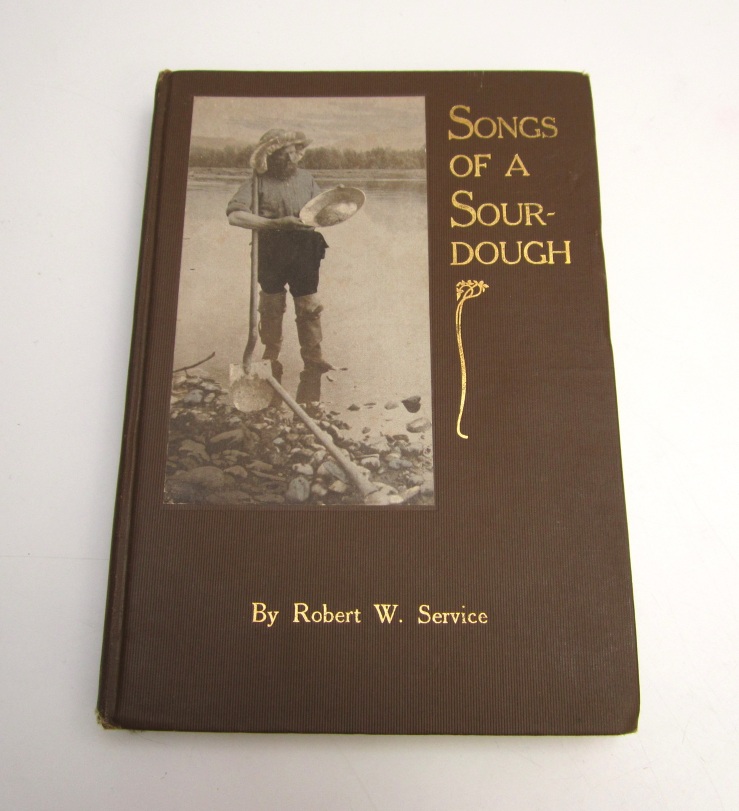 I found a few books in one bag, including this 1909 copy of “Songs of a Sourdough” by Robert Service … 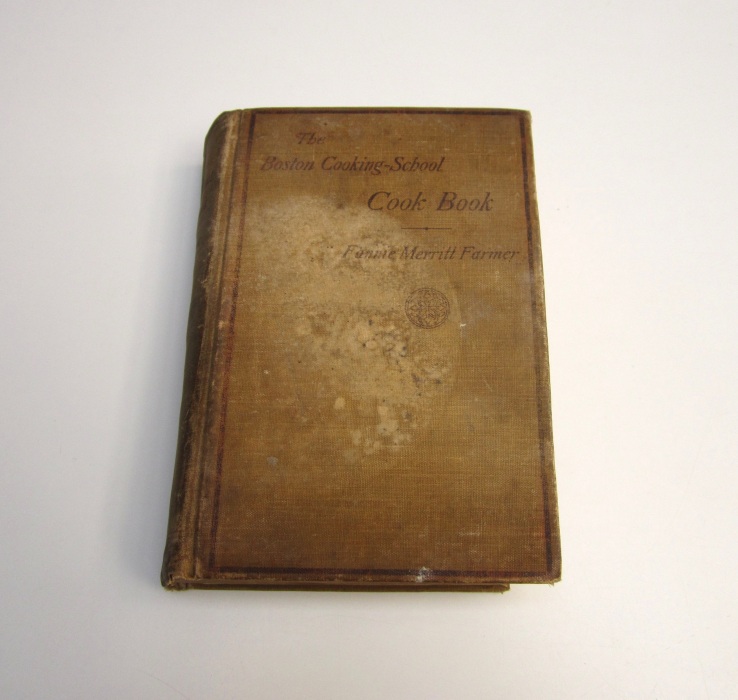 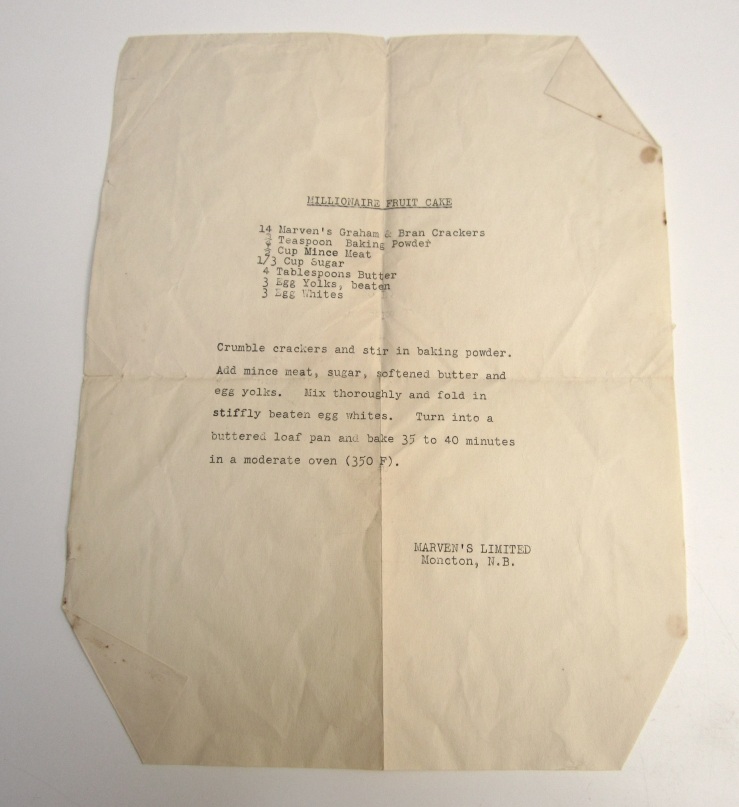 Inside the front cover of the cook book was this “Millionaire Fruit Cake” recipe, which curiously contains no fruit and calls for mince meat. It was written in type by Marven’s Limited of Moncton, New Brunswick. 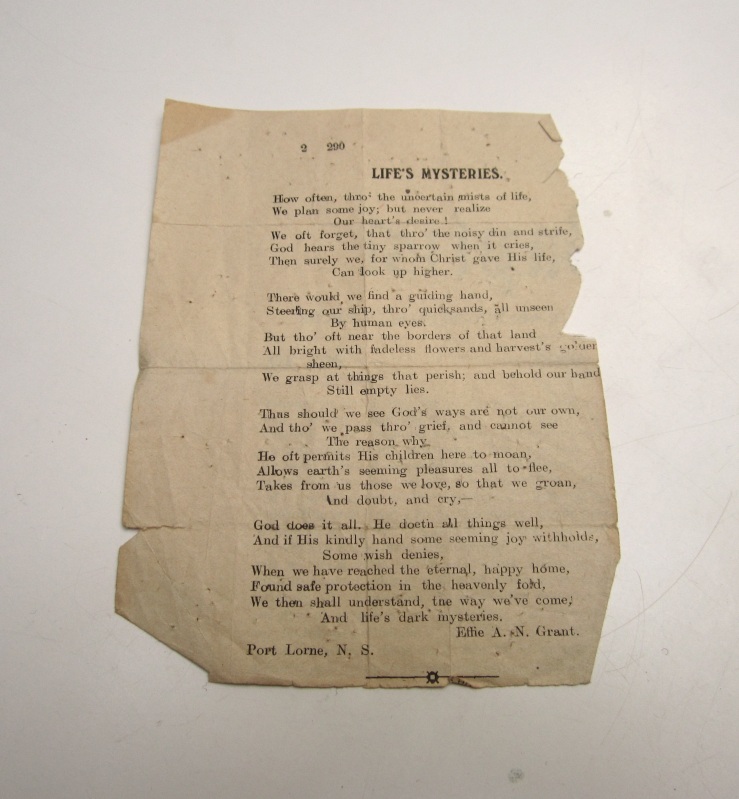 Near the bottom of the bag was this old poem, “Life’s Mysteries” … 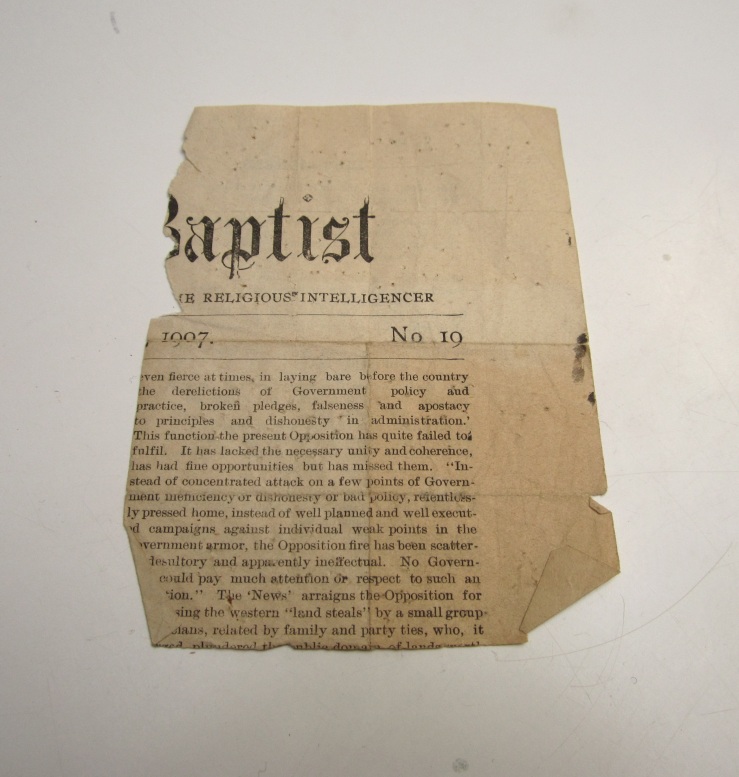 which was cut out of some kind of religious newspaper in 1907. 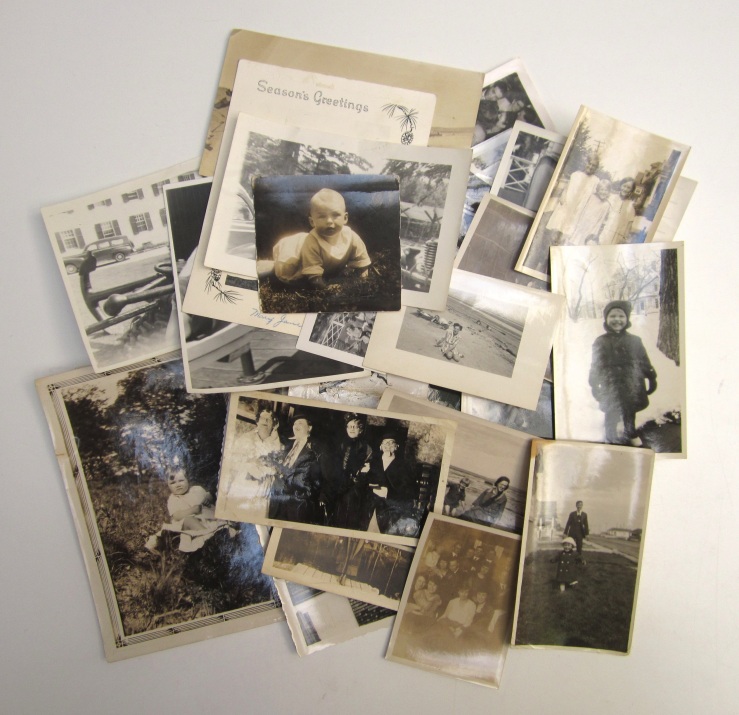 Another bag contained a collection of old photos, as well as many photocopies related to genealogy. It was apparent that someone put a lot of effort into researching their family history. 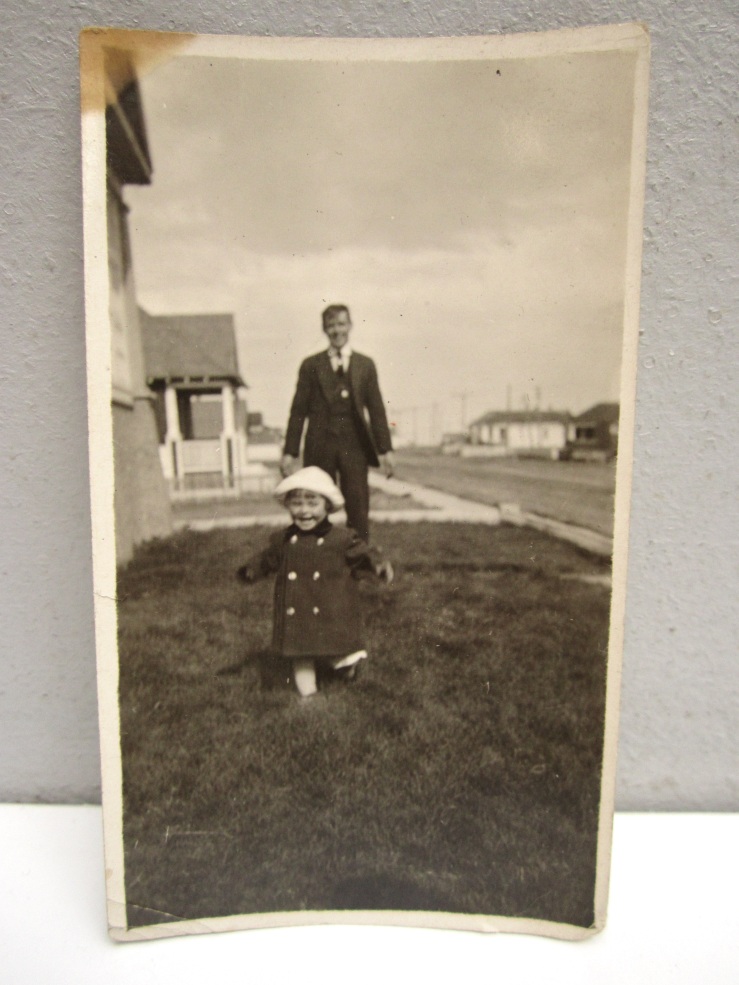 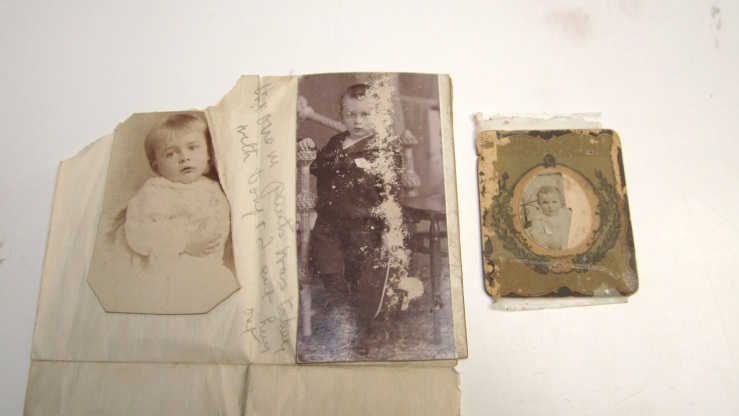 The two photos on the left were glued to a piece to paper. They were printed on cardboard, as was the style in the late 1800s and early 1900s. The note says “the one in parts was taken with (Dony?) and I cut him out.” The photo on the right has clear tape on the top and bottom, which can’t be taken off without ripping the paper. I could trim off the bits that aren’t attached, though. 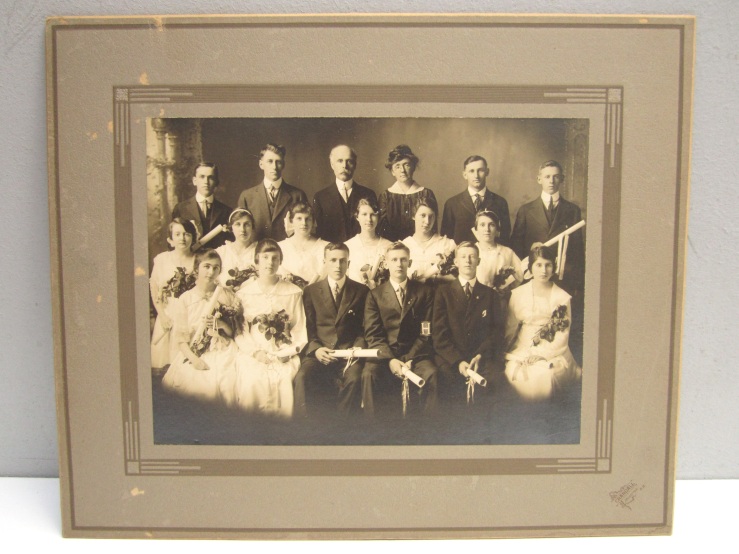 There was an old family portrait, as well as a photocopy of this same shot. 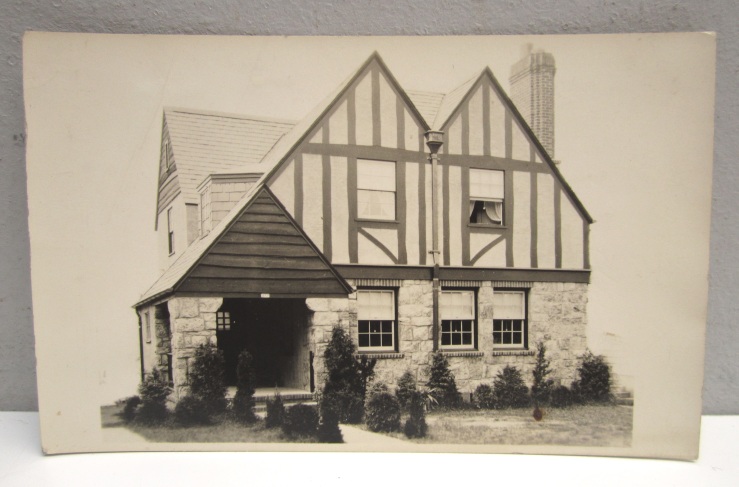 This old postcard has an address in Yonkers, New York written on the back. I looked it up and the house looks more or less the same! I wonder what the (presumably new) owner would think if they got this in the mail. 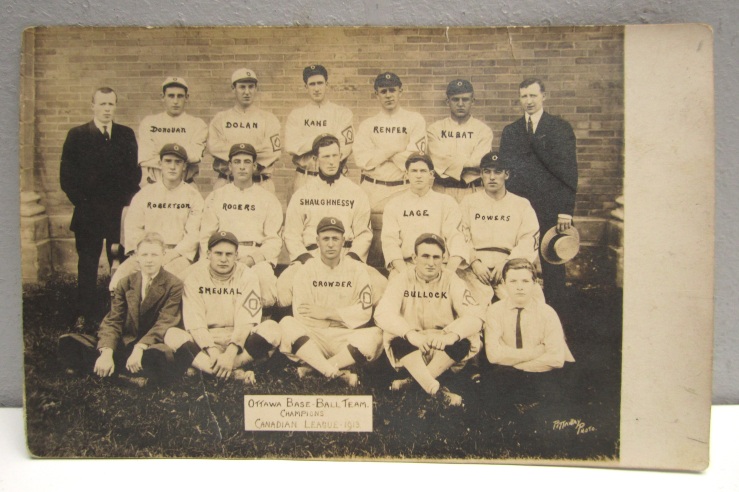 Another old postcard was my favourite find of the week. It features a group shot of the Ottawa “base-ball” team that won the Canadian League championship in 1913. The Canadian League was a minor league that operated somewhat intermittently from the late 1800s to early 1900s. It was largely based in southern Ontario.

The most notable individual in the photo is likely Frank “Shag” Shaughnessy. Shaughnessy had a long career in several different sports, not only as a player but also as a manager and executive. He was inducted into the Canadian Football Hall of Fame in 1963, the Canadian Baseball Hall of Fame in 1983, and the McGill University Sports Hall of Fame in 1997. The annual football game played between McGill and Concordia Universities is called the Shaughnessy Cup in his honour. He served as a player-manager on this Ottawa team, but also worked for the Ottawa Senators, Detroit Tigers, Montreal Royals, and many other teams.

It was just the other day I posted to Facebook expressing my hope to find more baseball related stuff this year! This is definitely the sort of thing I’d keep if I were rich, but I’m definitely not there yet so I’ll likely end up selling it. This postcard

sold for 25$, despite the fact that it was sold at auction (which is rarely the best way to make top dollar for your item) and features unknown players on a obscure league. I’d start this card at 100$, maybe a little bit more and adjust the price if it takes a while to sell. 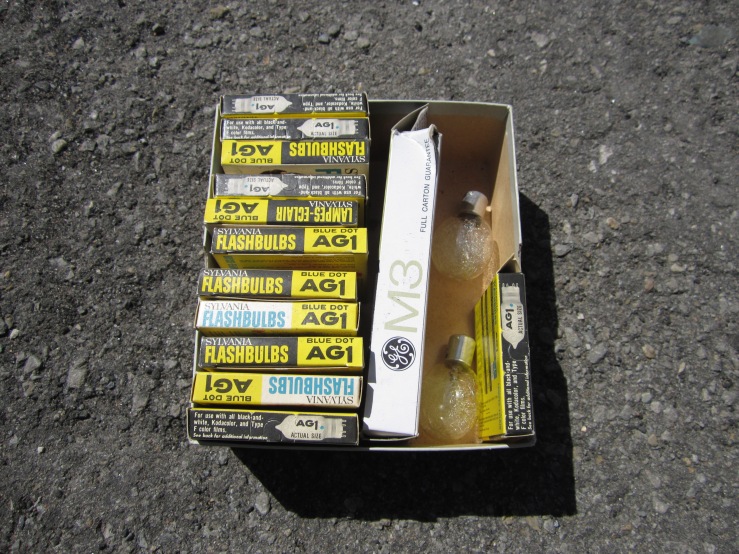 Otherwise, I saved a few things in Cote St-Luc, including a box of camera flash bulbs … 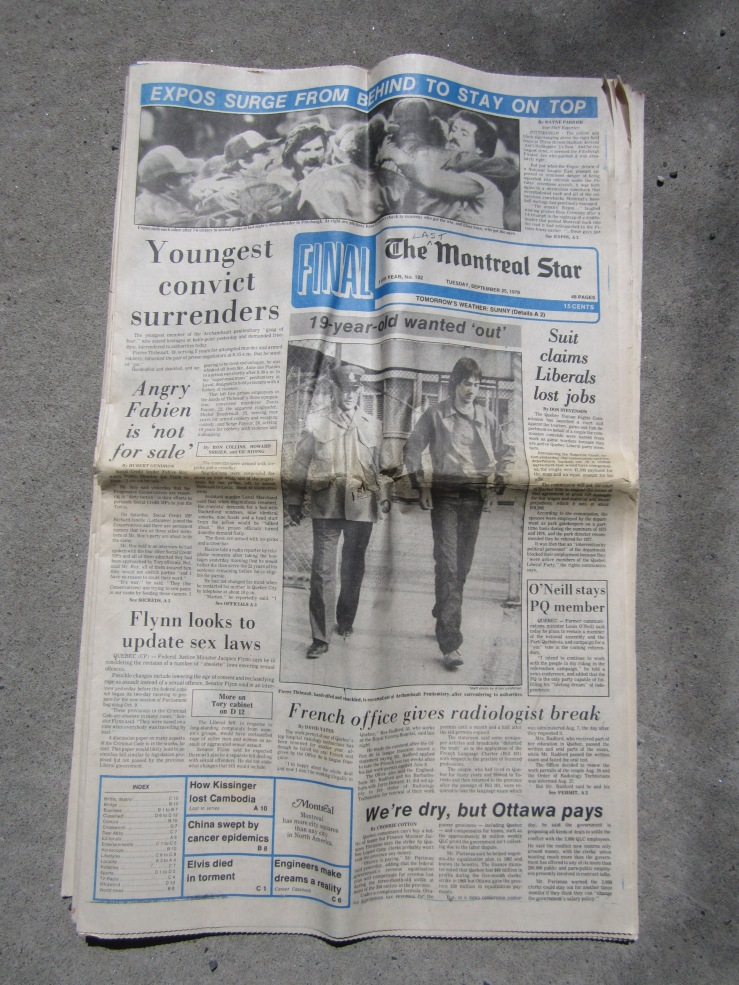 and the last edition of the Montreal Star, which was one of Montreal’s most popular English newspapers from 1869 to September 25th, 1979. Note that someone added the word “last” to the newspaper’s title. Maybe I’ll see if I can get anything for it on eBay. I also have the last postscipt edition.

This week has been super busy so far. If it keeps up, I might have to divide it all into two posts! And to think it’s not even the end of the month.

I’ve been doing more Facebook posts recently, many of which features finds that didn’t quite make the blog. I don’t like making posts too long, so this is a good way get those “bonus finds” out there. I’ve also been more active posting links related to garbage and recycling. You can see my Facebook page here (and you don’t need a Facebook account to check it out!). 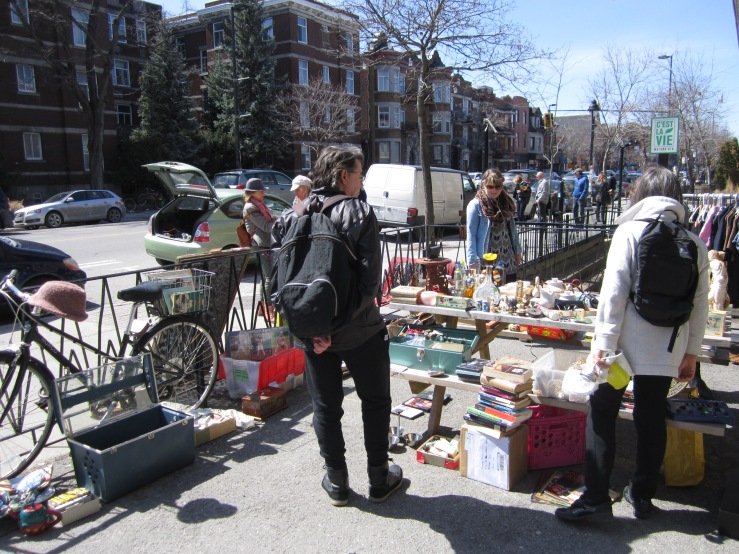 1. Yard sales: 473.75$ (206.50$ on Saturday, 267.25$ on Sunday). My first yard sales of the season went off without a hitch! I unloaded a lot of stuff, which felt great after being stuck with it all winter. I sold alongside a couple of friends who were moving, which was fun. Thanks to the readers that came to check it out! I’ll likely have another in a few weeks.

2. Minolta motor drive: On eBay for 25$. Sometimes I sell things not really knowing what they do. All I know is that it was camera related, and that I’d had for a while. 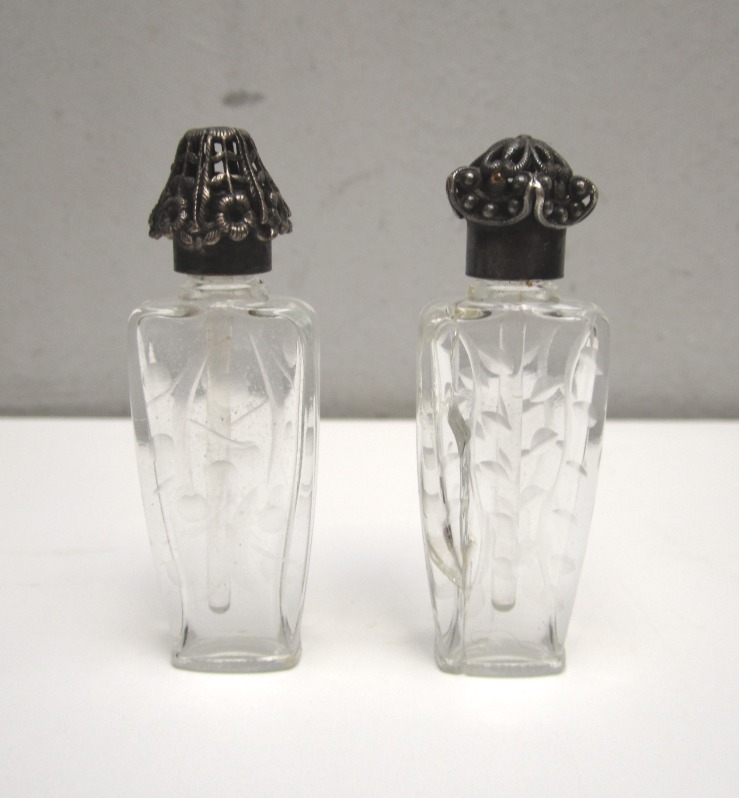 : On eBay for 67$. The customer has since sent me a message asking for a partial refund (half) due to the fact that one of the bottles was broken. However, the bottle was cracked when I found it and I made sure to mention this defect in the listing details. I guess she just didn’t read them! I offered to refund her 15$, but noted that the item was in the condition I described. That was Sunday night, and now it’s Wednesday afternoon so maybe she realized her error. Regardless, I’ll let you know if I end up refunding any of the total.

shortwave radio: On eBay for 100$. This is a nice little radio! I had it for a while before finally listing it in November. I think I found it along with a bunch of other electronics in Outremont back in September of 2013, but I’m not sure.

: On eBay for 75$. Found in Snowdon in May of last year, though it was only listed in the past couple of months. 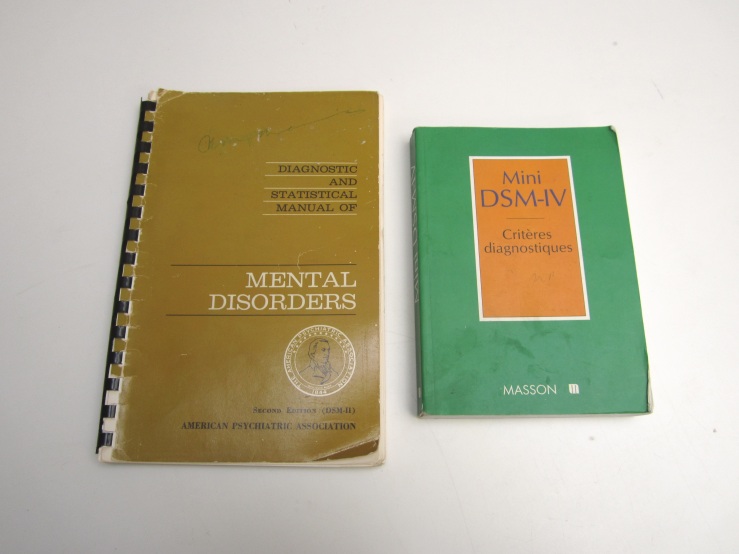 7. Silver ring (40$), strawberry shaped rhinestone brooch (20$): to a reader for 60$. She saw them on Etsy, but since she lived not far away I was able to deliver them myself. I found the ring in Rosemont a couple summers ago, while I don’t remember exactly where the brooch came from.

8. Vintage micro-mosaic pendant: On Etsy for 24$. Found at that same spot in Rosemont.

It’s looking like I’ll make around 16k for the year (ending May 18th, when I started keeping better track in 2014). It’s below the poverty line, but I’m still pretty proud of the achievement. I basically make as much as I would doing full-time minimum wage work, but I’m saving really cool stuff from destruction, doing my part for the environment, and above all doing something I love. With my relatively low expenses, I’ve been able to live comfortably, if not luxuriously, which is good enough for me.

I’m hoping to crack 20k this year. From the early going, it looks like I’ll have a good chance! That’s still not a tonne of money or anything, but it would put me above the poverty line.

(I priced this high partly because I like it so much. I wasn’t able to find anything similar for sale on the internet, but I’m guessing there’s a market here. Whether or not that market will pay 300$, that’s another thing. I can always lower my price later, though).
3. Vintage 1969 Owen Wood Zodiac Poster

(Currently the most expensive thing I have listed on eBay).

If you have a question, see anything that you’re interesting in buying, or to just want to say hello feel free to email me at thingsifindinthegarbage@gmail.com. I also enjoy reading your comments! I frequently get behind on emails, so I apologize in advance if I take a few days or weeks to get back to you.